Posted on December 6, 2019 by fashionshark

This week the American President came back to Blighty to take part in the 70th anniversary of the founding of NATO, and to showcase his unique brand of mendacity, meanness of spirit, and braggadocio, not to mention his extraordinary day-glo burnt umber ‘tan’.  Despite Trump’s belief that he is the big dog and everyone else his obedient puppies, his obnoxious behaviour, rambling press conferences, perpetual lateness, and sneering attacks on those colleagues who failed to fawn, made him the proverbial turd in the NATO punchbowl. This culminated in President Macron, Prime Ministers Trudeau, Johnson, and Rutte, and Princess Anne, caught on a microphone at Buckingham Palace dissing Trump, whereupon the Orange One sat frozen faced throughout the next morning’s sessions, and then slunk home early without holding his much-anticipated press conference. Although to be fair, by that point, we had all had more than enough of him. It never seems to occur to Trump that if he pisses on colleagues’ trouser legs, they might retaliate by applying the mopping-up cloth to that part of his person where the sun don’t shine.

It is however an ill wind that blows nobody any good. Trump’s premature departure aboard Air Force One meant that he avoided questions on his relationship with Boris Johnson, whether the NHS was or was not up for sale, and his views on Brexit, all of which our PM was dreading. You may not think that it is possible to make Johnson look worse than he already does. This is a man who tells barefaced lies in those interviews he deigns to do, who maintains that he did not twiddle knobs with busty technology entrepreneur Jennifer Acuri, who claims that he is not sitting on a report on Russian interference in our previous elections because it is unhelpful to him and to the Tories/Brexiteers, who refuses to face the BBC’s Rottweiler-in-chief Andrew Neil, and who is unwilling to identify how many children he has spawned – that is, if he actually even knows the answer. Previous articles expressing racist, sexist and homophobic views are airily dismissed ‘as taken out of context’ or that they were ‘written years ago’, so that they do not count. So far, despite all that, he has managed to stay above water, but even he might not have survived the warm approbation of the President. Johnson, who only weeks ago was praising Trump, now avoided any public contact with him, and gave an hour’s press conference without even mentioning his name, much as the man himself pretended that he had never met Prince Andrew, despite hob-nobbing with him during his State Visit last June, not to mention hanging around with HRH, Jeffrey Epstein, and Ghislaine Maxwell in the halcyon days before Epstein was outed as a paedophile and Prince Andrew became the Royal Family’s version of the Man In The Iron Mask. Trump and Johnson – peas in a pod. Heaven help us all.

We take all our examples of the week’s sartorial scandals from Monday night’s British Fashion Awards in London. We start with actress Noomi Rapace wearing Ann Demeulemeester by Sébastien Meunier. 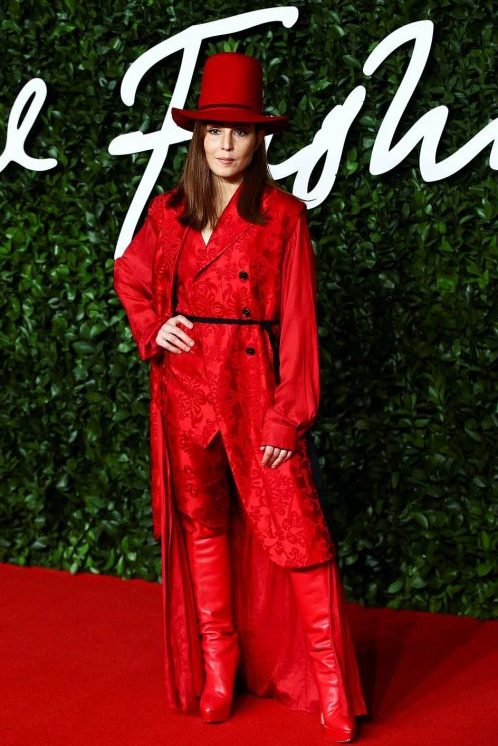 If a Mountie went to a fancy dress party as Sir Walter Raleigh in kinky boots, this is what he would look like. 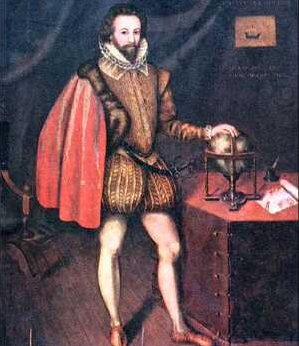 Actor Matthew Morrison.  No one has owned up to designing any of this. Good call. 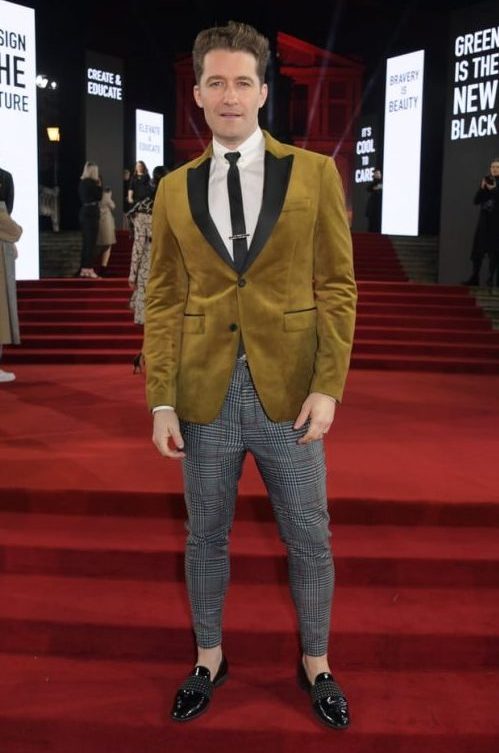 Matthew looks like a geography teacher whose trousers were washed at way too high a temperature. WTF struggled to discern the thinking behind wearing a brown velveteen jacket with grey Prince-of-Wales check trousers and black patent pumps. And then gave up. 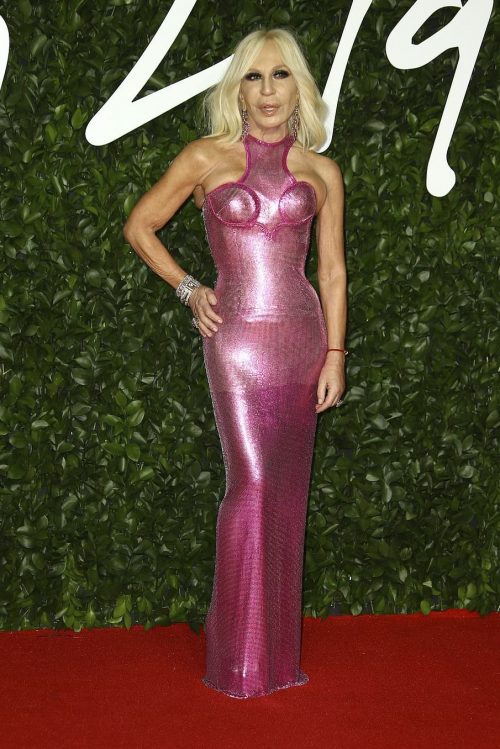 The dress would be lovely on someone with a 32AA cup – it is a gorgeous colour and beautifully simple. But there is a distressing amount of spilth around the tit department, like soufflés tumbling out of their ramekins. 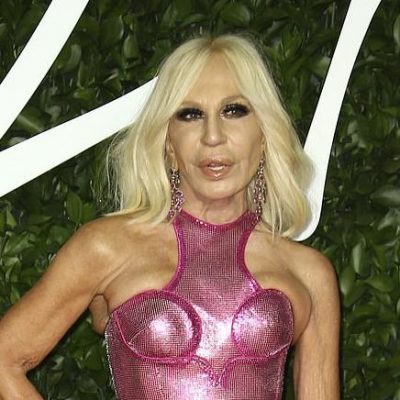 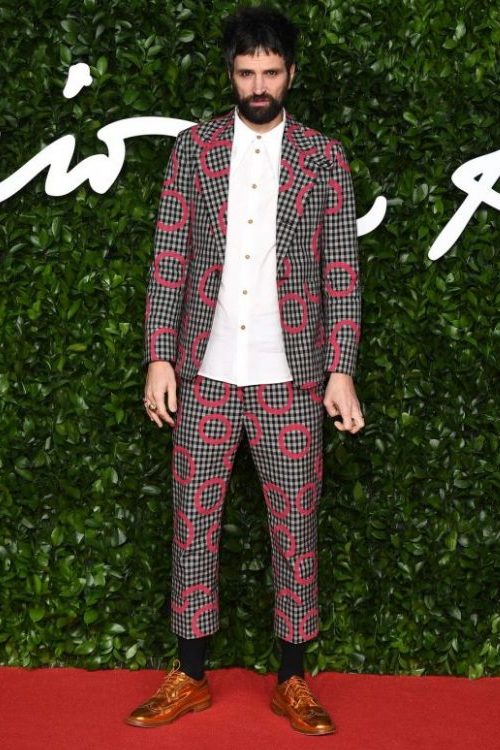 WTF was initially not against the suit with its noughts-and-no-crosses pattern, until she got to the ankles, at which point she discovered truncated trewsies, thick black socks, and gold tap shoes like Ginger Rogers. 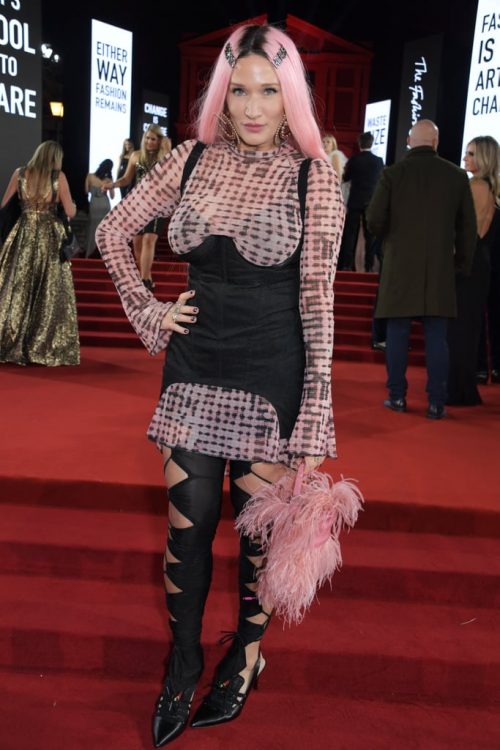 They design of the dress makes Lulu look as if she is suffering from serious droop age, and her tights are ripped. Time for a rethink. Including the hair. 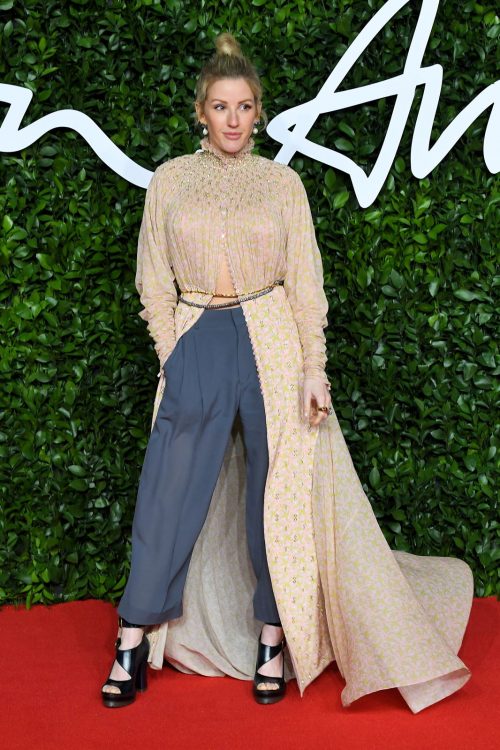 Is this designed so that the wearer can go straight from the office to the Red Carpet? A housecoat worn  over cropped trousers and clumpy sandals fail to satisfy either of those criteria. And WTF has a prejudice against anyone with a turd on their head. 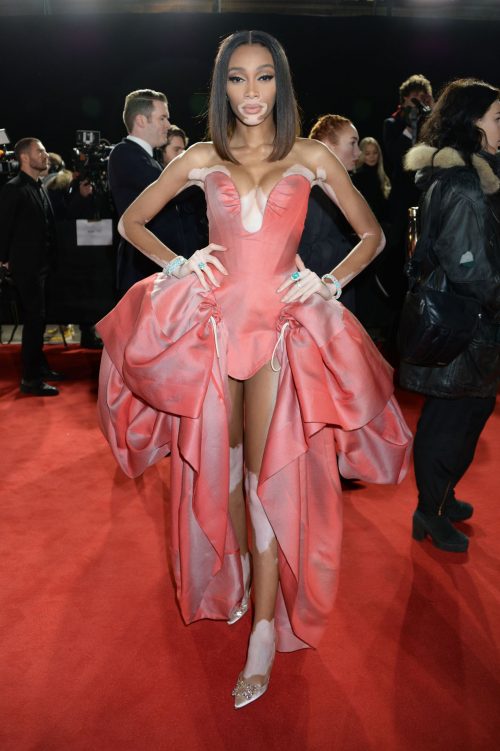 The lovely Winnie is dressed as a overblown rose with a fanny flap. 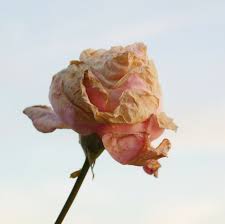 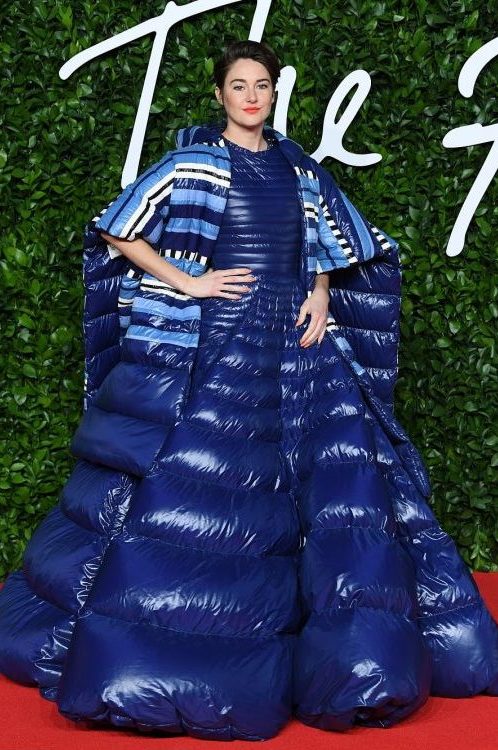 You have heard of a puffer-fish? Well this is a puffer-dress, worn with the same sort of shawl sported by Clint Eastwood in The Good, The Bad and The Ugly. At least it is warm, and given how chilly London is at the moment, that is a good thing. 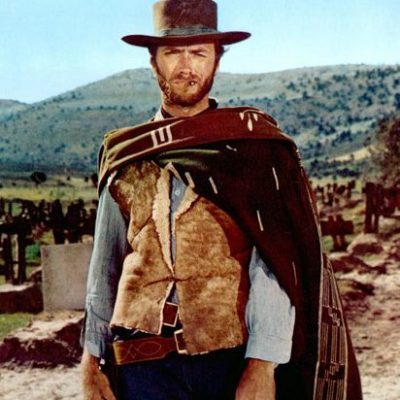 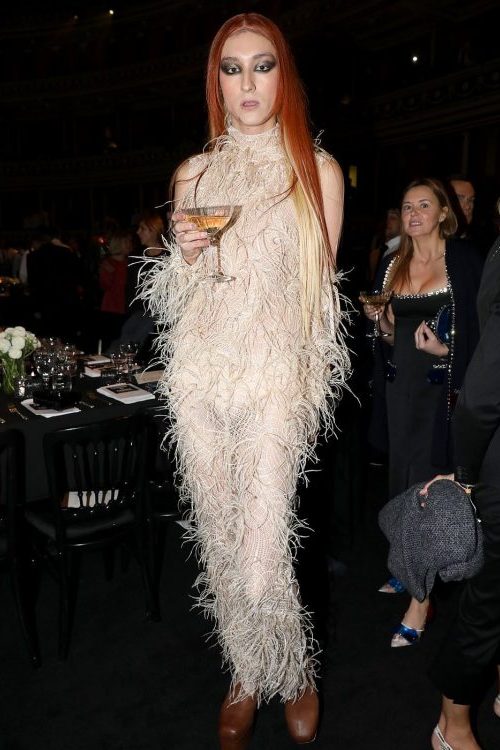 These are actually trousers. This is not a gender issue. This outfit would look like shit on anyone. A bedraggled yeti in ugly shoes with horrible hair and bad eye makeup. And visible panties are not good, whatever may be in them. The only nice thing in the photograph is the glass of wine. 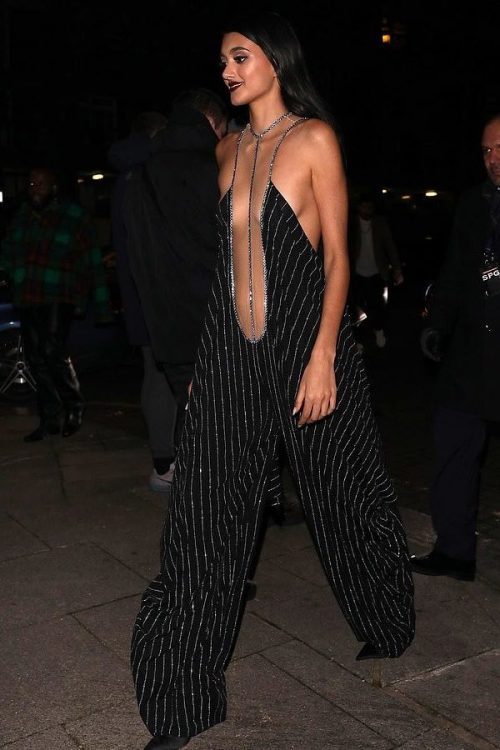 Neelam is giving us an Imminent Minge Moment in a pinstriped C Section operation gown. Vile. 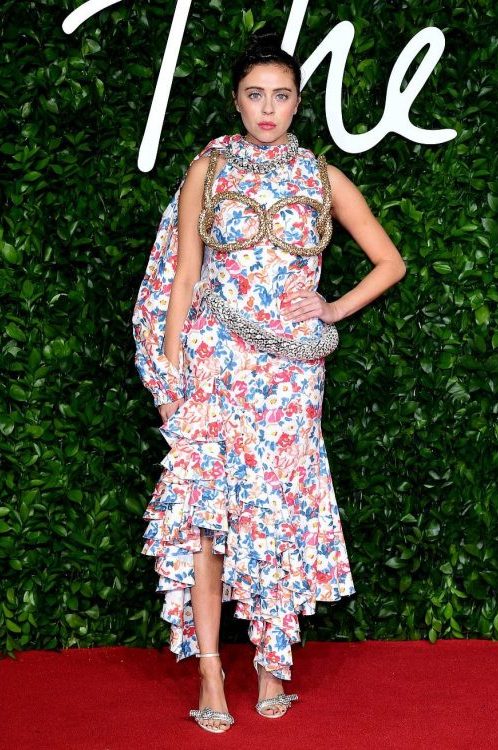 Bel caught the attention of WTF aficionado Quixote, who nominated it for an OMG-What-Were-You-Thinking Award. This is a pretty dress, inexplicably ruined  by the addition of what can best be described as a pair of tit goggles and something around her waist resembling a python. So we have a snake charmer in tit goggles and a cape designed for the Hunchback of Notre Dame. Kill me now.

This week’s It’s Got To Go comes (separately) from outraged WTF aficionados Charlotte, Gita, and Leah, all of whom wasted no time in complaining vociferously about Melania Trump’s horrible yellow cape and fuchsia-purple-whatever visible thingy, with matching suede Louboutin stilettos. The cape is Valentino and costs £4,500. The shoes are a snip at £495. 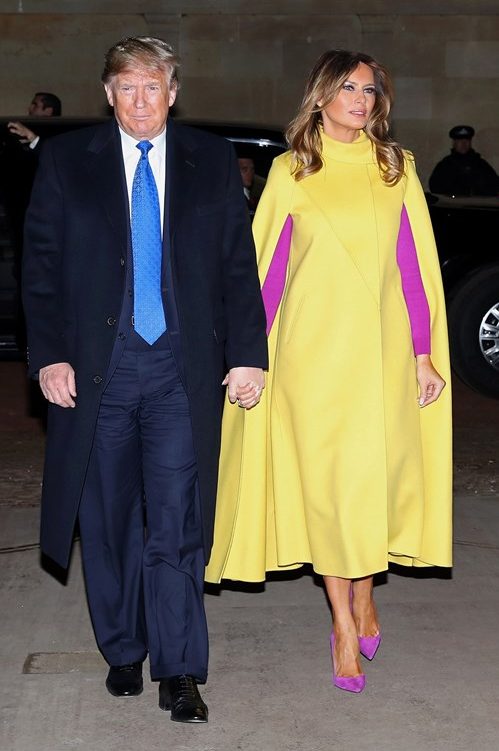 Compare the colour of this gruesome twosome’s oompa-loompa fake-tanned faces (and her legs, complete with foot blotch) with the colour of their hands. The get-up, a cape which Melania has teamed with a long-sleeved thermal vest and matching pumps, is just the pits. Why does she keep wearing capes? And for that matter, why does she keep wearing coats as capes, the subject of a separate complaint by WTF aficionado Pete? WTF thought it was to get her out of having to hold hubby’s little piggy-pink trotter-hand, but a better explanation comes from WTF aficionado Jen, who pointed out that if you were married to Donald J. Trump, you too would want to fly away. Still, Mrs Trump looks ridiculous.  It’s Got To Go.

OK Readers, that’s your lot for this week. Keep sending in your comments, which put cheer WTF up in these very troubling times, and please don’t forget your scintillating suggestions for It’s Got To Go. Let us meet again next Friday. Be good. x