Afternoon tea at Claridge’s is an elegant affair. For a mere £50 a head, waiters hover topping up the teapot as you feast on a selection of finger sandwiches, pastries various and freshly-baked scones served with cream and “Marco Polo jelly”, (whatever the hell that is). For £61, you can have a glass of champagne with it, and if you want to push the boat right out across Brook Street, for £74 you can upgrade to Laurent Perrier pink champagne. Lou Burns, her mother and her sister were snacking on smoked salmon and Lou’s 12 week old daughter was snacking on Lou and everyone was having a lovely time until a waiter appeared with a giant table napkin and politely suggested that Lou’s right breast and baby Burns should disappear under it. Lou’s afternoon concluded with her looking like a piece of furniture half-covered by a dust sheet in the middle of a move and she felt, with some justification, that she had not received the hospitality for which the hotel is world famous.

WTF is puzzled. Every week, this blog features women hobbling about in high heels with their breasts heaving, nipples on the verge of escape or clearly visible through sheer tops. Every week, 5.6m people read The Sun whose page 3 is adorned with a photo of a gormless girl with giant knockers, her nipples out and proud. Every day, billboards show naked ladies writhing about to flog all manner of products. Given that baby Burns was fastened onto Lou’s nipple, what was actually on display? Baby’s head would have obscured both the breast and the nipple. Do you suppose that Claridge’s staff would approach Lauren Goodger, whose breasts are tumbling forth in one of the pictures below, or Rita Ora, who is giving us a double-split minge moment in a skirt the size of one of those little sandwiches, and ask them to cover up under a giant table napkin? But the very sight of baby Burns suckling at her mother’s breast apparently so upset people spreading Marco Polo jelly on their dinky little scones that a minion was despatched to dangle the damask. Frankly, WTF thinks it is a damn sight more offensive that Claridge’s has the effrontery to charge £74 for a tea and a glass of bubbly. Let baby Burns take her sustenance wheresoever and whensoever she chooses. Why don’t we all just grow up and readjust our values?

We start our review of the week’s sartorial sewage with new singing sensation,  Charli XCX wrapped in gold foil like a suicidal Christmas turkey.

It’s C-P30 meets Barbarella.  The tit detail is quite, quite horrible. the shoes are horrible. The whole thing is decidedly horrible.

Next up we have Gwen Stefani wearing who knows what at the launch of Pharrell Williams’ range for Adidas.

There is fun. And there is folly. This left folly behind about 100 miles back and turned left at “you’re having a laugh”. WTF can only conclude in general that Gwen’s admiration for Pharrell’s stratus has clouded her judgment.

To the premiere of  the movie Into The Woods and lovely Welsh actress Erin Richards of Being Human and Gotham fame, wearing a Vera Wang top, The Row trousers and Roberto Cavalli boots.

No self-respecting dog would want this outfit for its dinner. Even a dog down on its luck with esteem issues would baulk at it. The top is from a practice run at one of Kim Kardashian’s three Wang wedding dresses (you know, the marriage lasting 20 minutes to Wotsisname) and the boots are down to Signor Cavalli’s usual standard of tackiness with an extra helping of tack. The look is sort of Miss Haversham meets a very camp Dick Turpin and not in a good way.

Also in attendance at the premiere was actress Alyssa Milano wearing Dolce & Gabbana.

Alyssa had a baby 3 months ago and is a strong supporter of breastfeeding in public, bless her, so it pains WTF to observe that this bottle-green, medieval serving wench outfit with its distracting flesh-coloured lining is a shocker. Hate the tattoo. Hate the shoes. Hate the matchy-matchy clutch. Thumbs down all round. 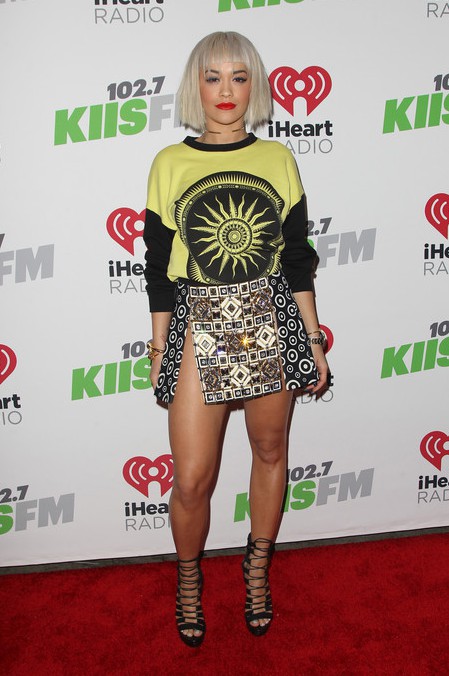 This is less a skirt and more a double-slit minge shield. Close up it is even worse. 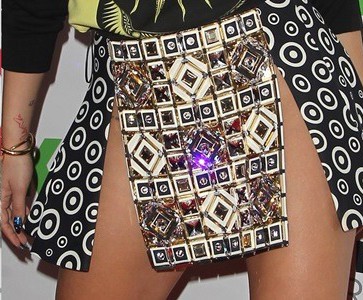 There is a distinctly pervy Roman vibe here, what with the jewelled minge shield and the circulation-stopping sandals and the necromancer’s sweatshirt. WTF has come to bury Rita not to praise her. This compulsive, not to say repulsive, exhibitionism has gone too far. Call for the men in white coats!

Here is Donna Karan wearing herself.

Designers in their own dud kit fall into the category of “Designers Who Need To See A Doctor” but even a combination of Professor Magdi Yacoub, Dr Christian Barnard and Dr Ross off ER could not revive this particular corpse. She could be in a remake of Rob Roy set in Manhattan and featuring a fight with a mangy, tartan-clad elk. 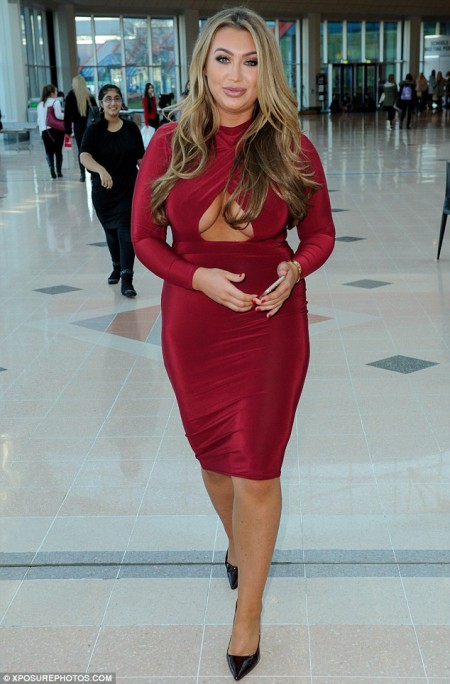 The problem with Lauren is that having tasted  fame in TOWIE, she now finds herself with neither talent nor brains fighting for oxygen on Planet Celebritee and struggling to find her USP.  Her only option is to post endless selfies of her bits and simultaneously boring us to death with her perceived weight issues. The dress is £16, which is £15 too much and the tit porthole is probably not up to the job. It is hard to discern whether Lauren or the dress looks the cheaper.

Here is the opposite of cheap, the wonderful Dame Helen Mirren wearing Alessandra Rich.

Helen! No! No! No! She wore this horror at Deauville in September and here it is again, only this time worn off one shoulder. No one should wear a see-through skirt but certainly not a grande dame like Dame Helen. Stop. It. Now.

To London and the BBC Music Awards where we come upon singer Ellie Goulding wearing Jean-Paul Gaulthier.

Overcooked salmon pink with laced trousers like Robin Hood is bad enough. But then we get to the side view..

Ellie joked that at least she wouldn’t get sweat patches. But better sweat patches than side boob. This is why the Good Lord invented deodorant…

This week’s It’s Got To Go is suggested by an irate WTF of Islington who is fed up to the back teeth with those bloody smartphone apps supposedly there to let you park without fuss. Except that often they don’t work and you are left on the pavement like a prat in the pissing rain staring at a message which says “No connection” or watching it buffering away. At which point, as a traffic warden hovers, positively slavering at the thought of sticking a penalty notice on your windscreen, you dial the pay-by-parking number only to be met by an electronic voice advising you at 20 pence a nano-second that “Smartphone users, for quicker and easier payments why not go to the mobile website?”. Which is where you have just come from and which has given you the runaround. It’s Got To Go.

OK Readers, that’s your lot for this week. Next Friday will be the last blog of the year with January bringing you the 2014 Christmas Turkey Poll. Keep those comments coming in and be good x