On the face of it, the Parkland school shooting, where 19 year old Nicholas Cruz murdered 17 people with an AR-15 semi-automatic rifle, was just one more incident when a homicidal maniac exercised his inalienable right to murder innocent people at random with a deadly weapon. In Florida, you can buy a semi-automatic rifle at the age of 18 but you have to be 21 to buy a beer. A few days after Parkland, the Florida senate refused to pass a motion banning AR-15s but voted to condemn pornography as harmful to teenagers. In Texas, you can own as many guns as you like but you are not allowed to own more than six dildos. Wanking, it seems, is more dangerous than bullets. Politicians, many of whom fortified by fat cheques from the National Rifle Association, wrung their hands and offered up the customary thoughts and prayers. Donald Trump, who trousered $30m in NRA campaign contributions, paid a flying visit to the local hospital and to the Sheriff’s department, where he was photographed grinning broadly and giving a thumb’s up sign. He then went to Mar-a-Lago, 40 miles down the road, where he had been going anyway, and showed his respects by abstaining from golf for two whole days. Everyone assumed that once the funerals were over, everything would return to normal – until the next time.

Except that did not happen. The kids from Marjory Stoneham Douglas School, shattered, angry, in mourning, resolved to take a stand. And so they spoke out. They rallied. They railed against the NRA and those GOP Senators, including Florida’s Marco Rubio, who took NRA funds. They blamed Trump for repealing Obama’s law that people suffering from mental illness should not be able to purchase a gun. They abused him on Twitter after he claimed – shamefully – that the FBI had failed to act on tip-offs about Cruz because it had been too busy pursuing him about Russian collusion. They called for a ban on weapons. They descended on Tallahassee, the State Capital, lobbying their representatives and seeking out the Governor. They demanded that other kids in other schools should not have to watch their classmates shot, should not have hide in cupboards whilst texting their parents goodbye, should not have to attend the funerals of people they grew up with. They were critical. They were vocal. They were articulate. They were astonishing. This week, some of them (the less vocal ones) attended a meeting at the White House, where their President was forced to listen to their stories. Others appeared on a televised CNN Town Hall where they confronted Rubio (who at least had the balls to turn up, unlike the Governor who stayed away) and Dana Loesch, a representative of the NRA. President Trump claimed that he will now take action. Let us see whether he does and what it is. He also claimed that the NRA are ‘great people’ and ‘true American Patriots’.

Inevitably, it did not take long before the slime slithered out to attack the kids. They were ‘actors’. They were ‘fame whores’. They were coached and manipulated by the Liberal Left, the Fake News, George Soros, the Deep State and, probably, Beelzebub. One of them had a father who used to be in the FBI! Some of them were not even injured! To these scum, any criticism of either Trump or guns is intolerable. They love the Second Amendment but they really hate the First. At the CNN Town Hall on Wednesday night, Loesch, the Bullshit Breitbart Barbie, was emollient to the victims who berated her but yesterday, in a speech to the Far Right CPAC conference, she showed her true colours, asserting that these slaughters were the fault of Law Enforcement, not guns, and that ‘many in the legacy Media love mass shootings” because ‘crying white mothers are ratings gold’. Of course, she did not say that during the CNN event to the crying white (and non-white) mothers. She complained to CPAC that she had been in fear of her life the previous day when some of the audience had (wrongly) rushed at the stage in fury. Really? Try hiding in a cupboard whilst gunfire rages around you and then emerge to find your friends and teachers lying dead in a pool of blood, having been shot with one of the lethal weapons you are sworn to protect. Then come back and talk about fear.

Let us turn to something a little more cheerful. This is one of WTF’s favourite weeks in the fashion calendar, the week where the BAFTAs and the BRITs coincide in a cornucopia of cack. We start our survey of the week’s sartorial slop-bucket at the  BAFTAs ceremony itself and actress Alison Janney, wearing Bibhu Mohapatra.

WTF has adored Alison ever since The West Wing and the dress itself is spectacular, but the shrug looks like the metal bit at the top of a hinged corkscrew. 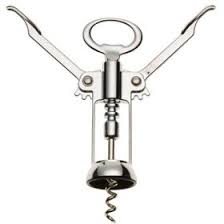 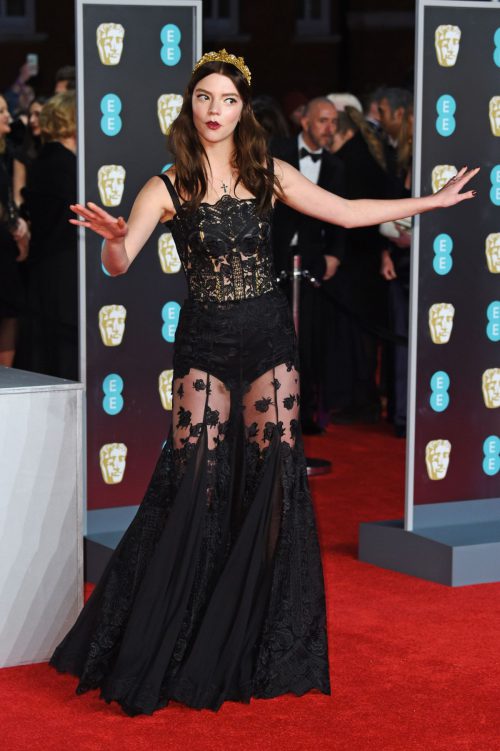 Anna’s lower limbs are in full mourning but the upper thighs are out and proud. Clock the tiara. Anna is the princess of peekaboo.

To the pre-BAFTAs party and actress Kate Mara, wearing Valentino.

Yes, Valentino. This pink thing (the dress, not Kate or Signor Valentino, he is the colour of creosote) is the product of a one night stand between a prawn and a puffy pelmet. And just in case you were insufficiently appalled, Kate has added a red cross-body bag and a pair of pewter pumps, neither of which has anything to do with the price of fish. Kate’s stylist deserves a slap, a P45 and another slap.

To the BRITs and actress Noomi Rapace, wearing Matty Bovan.

This is just weird, like looking at someone’s innards through a kaleidoscope in a trippy version of Silent Witness.

A very swirly suit, a Mayoral Chain and silly sunglasses. But kudos for carrying the  white rose.

Popular singing troupe Little Mix, in a variety of vulgarity.

From left to right, Jade Thirlwall looks nice in a long black dress and red lippie; Leigh-Anne Pinnock looks more like Leigh-Anne Pillock in a negligée by Stella McCartney who, once again, is taking the piss; Jesy Nelson is giving us the full cameltoe thing in thrush-inducing slime green leather; and Perrie Edwards is wearing a nightdress that appears to go with Leigh-Anne Pillock’s negligée but is in fact by Amanda Wakeley. 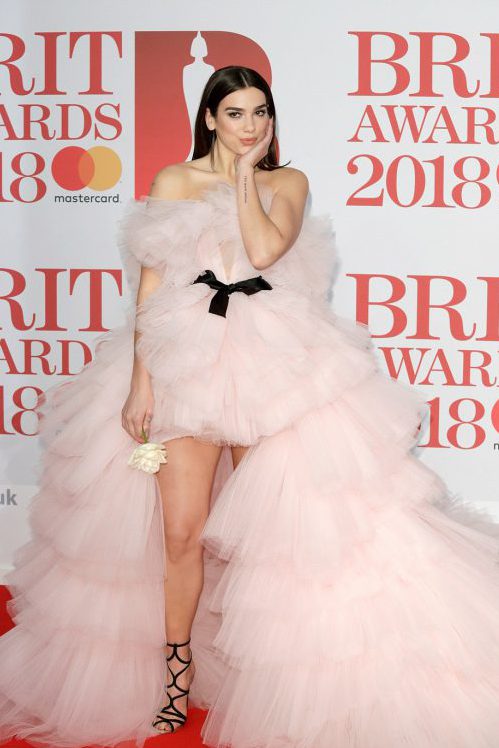 Dua is very pretty but she is standing in a sea of candy floss.

MNEK has come straight from his day job as a  short-order chef in a corner diner.

Finally, we have OITNB actress Dascha Polanco at an NBA Party. Heaven knows what she is wearing….

Let us not beat about the bush. (Indeed, WTF has never seen a bush that she has beaten about).  This is a shower curtain over baggy thermal long-johns. And the back view is even worse.

This is NOT a size thing. Dascha is gorgeous. This is a fuck-me-that’s-terrible thing.

This week’s It’s Got To Go comes from WTF aficionado Annie Bishop, who sent in one of THE MOST REVOLTING things WTF has ever seen. SO THOSE WHO DO NOT WANT TO SEE LADY PARTS, LOG OFF NOW AND COME BACK NEXT FRIDAY.

WARNING – HERE IS ANOTHER WARNING TO GO WITH THE FIRST WARNING…

This merkin is brought to you courtesy of “South Korean-born polymath” designer KAIMIN, who featured them in his New York Fashion Week show. And not just merkins but hairy-bearded merkins. And WTF has a question to ask? Why? WHY? Minge Moments are bad enough but Merkin Moments are quite beyond the pale. KAIMIN and these hairy things have SO Got to Go.

OK Readers, that’s your lot for this week. Thank you for your comments last week and your – in some cases quite astonishing – suggestions for It’s Got To Go, although whether WTF should be thanking Annie Bishop for the merkin is up for debate. Let us meet again next Friday. Be good x

6 Responses to WTF BAFTAs, BRITs and Other Shockers Special