The last General Election was fought, or certainly initiated, on the basis that President Maydogan should not be opposed because it would be treasonable to do so. The Mail’s headline was “Crush The Saboteurs” whilst The Sun trumpeted “Blue Murder!” Even though downgraded to Mrs Maybe, the Prime Minister who was responsible for the worst political misjudgment since, er, the last one, is still there. There has however been a sea change. During the campaign, her Cabinet were silent as Trappist Monks with the focus on Vote Maydogan rather than Vote Tory. But now that she is clinging onto power by virtue of a billion pound bung to the DUP, they are sharpening their stilettos. Despite mocking the Labour Party for its fiscal profligacy and voting for the Queen’s Speech, they are now calling for less austerity, wage rises for the public sector and all sorts. At this rate, they will be demonstrating outside no 10 with placards before the year is out.

Labour is heading in the other direction. Jeremy Corbyn not only thinks that he won the election but that he is also the lovechild of Jesus Christ and Justin Bieber. He headlines at Glastonbury. He comforts the suffering. He will soon be walking across the Thames and divvying up a baguette and a bottle of Beaujolais amongst the 5,000. And although he speaks of reconciliation towards those who spurned him, others are markedly less, well, Christian. In Liverpool Wavertree, sitting MP Luciana Berger is on maternity leave. Her local party voted in a new committee of Momentum members, amongst them one Roy Bentham who said “Luciana needs to get on board quite quickly now. She will now have to sit round the table with us the next time she wants to vote for bombing in Syria or to pass a no confidence motion in the leader of the party – she will have to be answerable to us. We would like her to come out publicly like other MPs have done and apologise for not supporting him in the past.” At which point Ms Berger issued a statement praising “the revitalised national party under Jeremy Corbyn” but stopped short of an actual apology. Now there is a list circulating from Momentum to ditch 49 disloyal MPs. When did this country become Cambodia under Pol Pot? Will Ms Berger be frogmarched into Anfield and made to confess all in front of a baying crowd singing “Oh, Jeremy Corbyn”? Apologise? Is this what we want the Labour Party to be? For shame.

Of course, the high watermark of fawning is President Trump, who considers any criticism of him Fake News. He complains about what the MSM is not writing. He loves Fox News, his personal Pravda. In Warsaw yesterday he complained that NBC criticised him although he had made them a fortune with The Apprentice. He avoids direct questions from he Press, preferring to address adoring, handpicked crowds at rallies. His Beliebers see no wrong and blame the media and “the Left” for everything. Watch his new Cabinet spending 11 minutes praising him to the skies and thanking him for the blessing of being able to work with him – it will put manufacturers of emetics out of business.  Slowly but surely, Trump is creating a parallel universe where only what he says or what Fox says or what Breitbart says is the truth – anything else is a lie.  Stalin would be drooling….

We start our weekly review of fashion follies at the Essence Festival in New Orleans with soul singer Monica Brown, wearing Balenciaga. 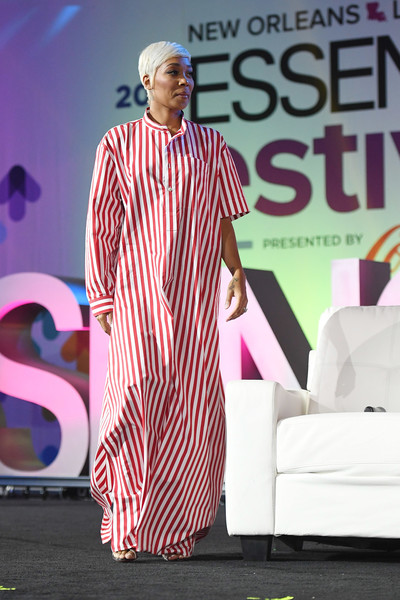 First, this is a deckchair purporting to be a dress. Second, as regular Readers will know, WTF hates a one-sleeved dress almost above all things but this new variant is simply not to be borne. What is the point of a long sleeve and a short sleeve on the same same garment? WTF can only surmise that it is to get the sun on your arm as you drive.

Next up, we have singer Gwen Stefani wearing – who can say what this is?

Bamboozled. WTF is bamboozled.  This trench coat is neither use nor ornament. It might repel the elements down to Gwen’s waist but thereafter she will be left with soggy nether regions, like net curtains blowing out of a window into the rain. The kiddie, however, is mega-cute. And much better dressed.

This is Dan Edgar from TOWIE. The picture is not recent, but it was brought to WTF’s attention by outraged WTF aficionado Johan, who demanded its inclusion. And he has a point. 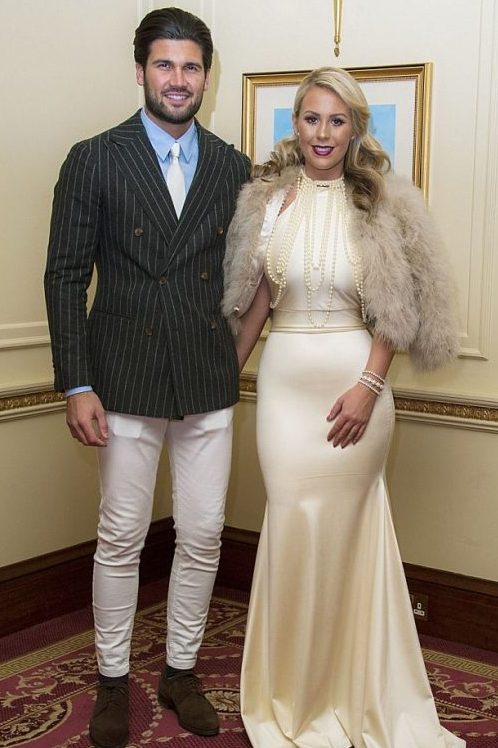 Three words. No, not those ones. What. A. Fool. We saw something similar at Ascot with Chris Eubank and this is no better. It is as if he has been dressed by two different people on a job share. Whoever did the top half can just about be excused, although the white tie is pathetic. But whoever did the bottom half needs to book an urgent appointment with an optician. 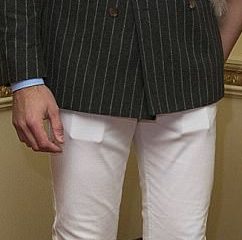 These are very, very terrible trousers. Very terrible indeed. They should not be worn at all but certainly not with anything in the pockets. What HAS he got in there? Is something plugged in to a pair of sockets?

To Paris Fashion Week Haute Couture, where women are paid to wear this crap. What follows is a trio of duds from Dior, starting with model and actress Aymeline Valade wearing Dior. 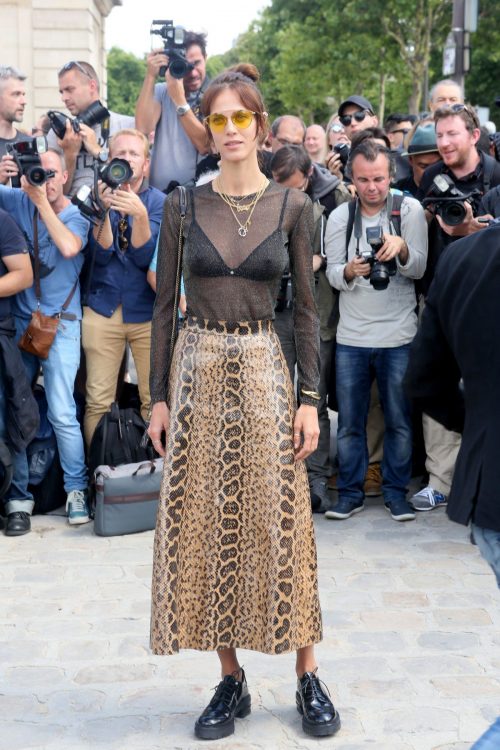 This punches a lot of WTF’s hate buttons, from the straggly top-knot like a decomposing squirrel to the teeny, tiny bra with VNA (visible nipple activity) under the sheer top to the dead cobra round the rest of her and the Prisoner of Cell Block H wardress shoes. 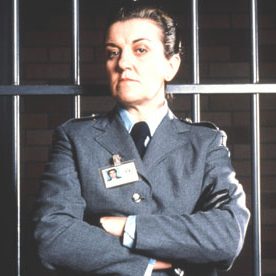 The whole thing is profoundly unsexy and worse, bloody ugly.

And here is poor Jennifer Lawrence who has a contract to wear Dior and always seems to be the low woman on the totem pole where its clothes are concerned.. 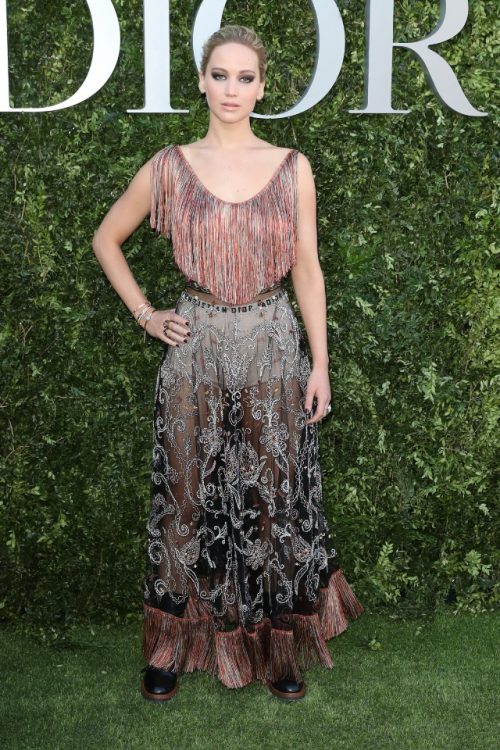 You all know how much WTF hates those big panties with the Dior J’Adior logo (you have to buy them on eBay, where they fetch about $2000) and here they are again, this time under Jennifer’s Western-saloon-floozy outfit with more fringing than a sofa warehouse. And the sideview is worse. 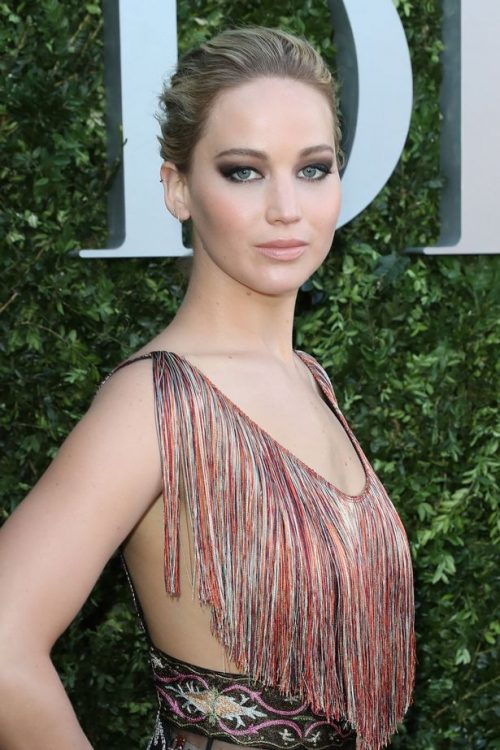 I mean, you would pray that there is no wind, wouldn’t you? You would summon any priest, witchdoctor, ANYONE, who could try and stop the wind blowing. Because if the won does blow, you’re fucked.

And – of course- there was Bella Hadid. 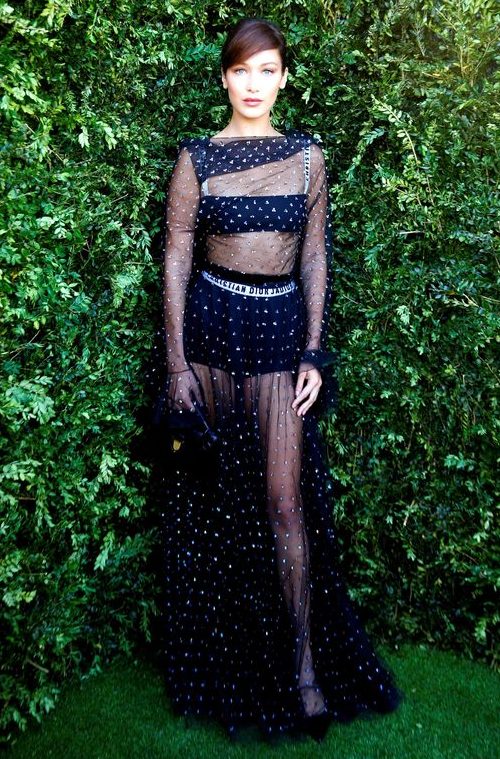 Bella has gone one better than JLaw and has got the matching bra (another $2,000).  Oh, and a dress that isn’t really a dress, just a swathe of material chucked on willy-nilly. 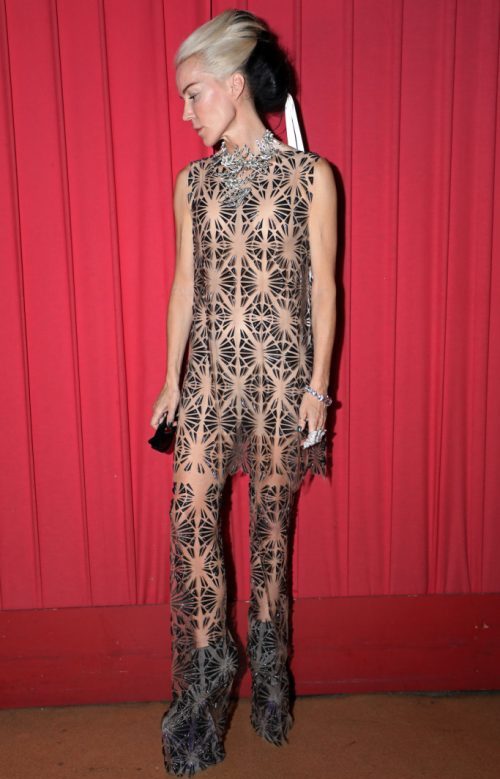 Not to herpen about it but the worry about the imminent Minge Moment behind the snowflake stencils is eclipsed by those hideous hooves – very Daphne Guinness – which seem to come with their own built-in couture galoshes.

This week’s It’s Got To Go comes from WTF of Islington who is sick to the back teeth of those self-appointed wankers on building sites whose job it is to walk into the middle of the road and stop the traffic whilst their colleagues do whatever it is they are doing with winches or guide large lorries inch out into the road whilst motorists sit and fume. They already have stolen one lane from the traffic – now they are out to steal another one. And who the hell gave them the right to stop traffic on the Queen’s Highway just because they have a high-viz jacket, a hard hat and a copy of The Sun protruding from their back pocket? They’re wankers and They’ve Got To Go.

OK Readers, that’s your lot for this week.  Please keep those comment coming in (WTF does love them so) as well as your excellent suggestions for It’s Got To Go.  Let us meet again next Friday. Be good x