After Manchester, some small things made you feel that humanity had not completely died at 10 30 pm on Monday. Doctors and nurses came into work whether they were supposed to be there or not whilst hotels and restaurants donated food. Taxi drivers ferried hysterical families away from the Arena free of charge. People opened their doors to those shocked and stranded from out of town, offering tea and a bed for the night. The citizens gathered together in Albert Square in solidarity, Christians, Moslems, Hindus, Jews, Sikhs, Buddhists, those of no religion at all and supported each other.

But as usual, the upheaval dislodged the slime which always slithers to the surface on occasions such as these. The usual motormouth rabble-rousers blaming the Government for letting Islamic terrorists into the UK (even though Salman Abedi was born in Manchester). The vile Katie Hopkins calling for “a final solution”, later surreptitiously amended to “a true solution”. Invoking the Holocaust was really what we needed this week, Katie. American right-wingers berating us for condemning Trump’s travel ban, which last night was again stayed by the US Court of Appeals and Trump himself attacking NATO leaders over the evils of migration. Trump, champion of Islamophobia who curtseyed to the Saudis, those avid supporters of terror. Journalists bashing at the doors of distraught parents and siblings who were sat inside waiting for news of those still missing. Those who know nothing about Islam insisting that what Abedi did was in total compliance with his religion, wanting to intern Moslems, condemning the community for failing to turn him in – even though it turned out that numerous people had reported him to the authorities who had done nothing about it. The only laugh of the week was when the former UKIP MEP Janice Atkinson, who now sits as an independent, called for the death penalty for suicide bombers. That is the sort of deep thinking we need to tackle the issue. On the other hand, on the left the conspiracy theorists were out in force, suggesting that the Tories had planned the attack as an election strategy and that Theresa May was a terrorist. Today Jeremy Corbyn will make a speech suggesting that our invasions of Iraq, Afghanistan and Libya have, at least in part, caused the rise of ISIS. He is not wrong but he will get dogs’ abuse for it.

When Thomas Mair murdered Jo Cox MP, no one demanded that the white population of Batley & Spens should apologise, let alone the British white population. When Dylan Roof broke into a church in Charleston S.C. and shot nine black worshippers, no-one demanded that the white population of that city apologise, let alone the American white population. But it is apparently incumbent upon every Moslem in the UK, however law-abiding, however patriotic, however devout, to grovel for the horrifying, murderous acts of a few. We are faced with deadly killers, deadlier still because some of them are not the obvious rampant activists but petty criminals, wastrels and dope-smokers, often leading the most un-Islamic of lives. Clearly the situation needs the utmost vigilance. Where there is suspicion it must be rigorously  followed up, whatever the budget. Mistakes have been made in the past and checks have not been properly carried out, people admitted or allowed to stay or permitted to remain at liberty when they should not have been. But vilifying a whole community will not work, is wholly unfair and lessens us as a nation.

Let us try and cheer ourselves up with our review of the week’s fashion fiascos, starting with Catherine, Duchess of Cambridge wearing Alexander McQueen, seen here with her little daughter Princess Charlotte. 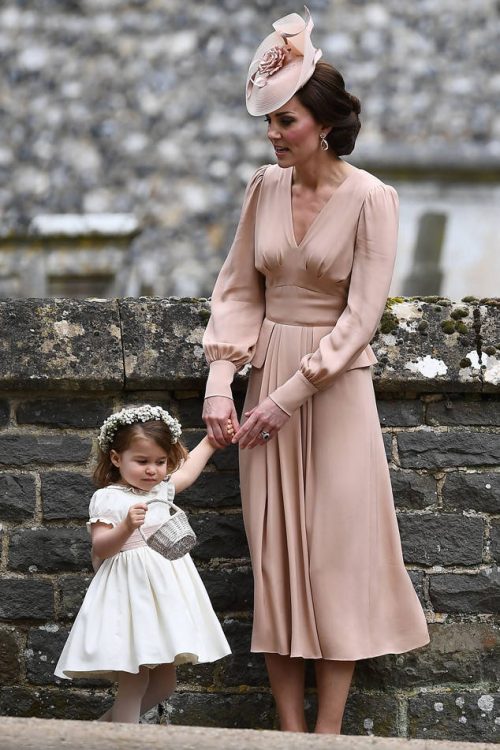 Kate is 35 but looks like Dame Vera Lynn extolling the White Cliffs of Dover. The meh-coloured dress has pleated tits, aptly described by WTF aficionado Gerry as “slipper tits”, making her look more droopy than a pair of spaniel’s ears. Meanwhile, there is never an excuse for a fascinator. Wear a hat or don’t. Shit or get off the pot.

Film critic Jonathan Romney, on duty at Cannes, brought this excrescence to WTF’s attention and was anxious to let her know that the suit is exactly the same at the back as the front, like looking at yourself in a rear view mirror.

Next up is actress Salma Hayek, wearing Gucci. 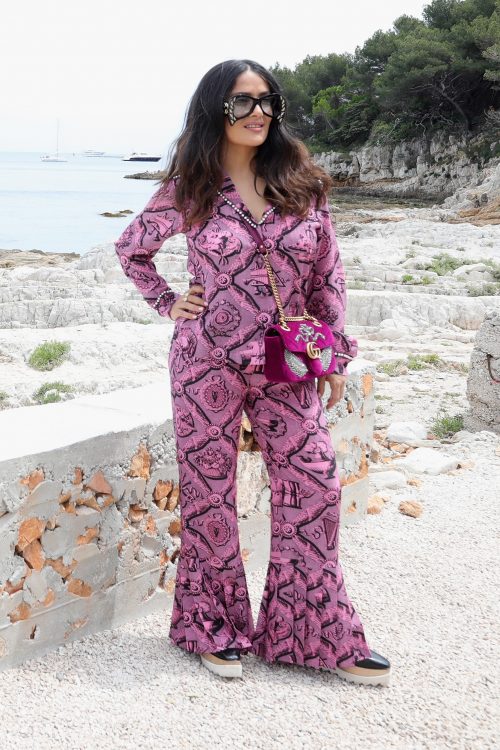 WTF had to check her drink to make sure that it had not been spiked but this is what the outfit is meant to look like,  the pattern and cut so mind-numbing that even Agnetha and Anni-Frid from ABBA would have rejected it as OTT.

Eva seems to be standing behind a one-dimensional silhouette of a giant bunny rabbit, as if she were at a funfair having her picture taken. As for the flesh-coloured illusion panels, whoever’s flesh they are supposed to match, it is not hers, whilst the zip is so obvious and bulky it could probably be seen from the moon. 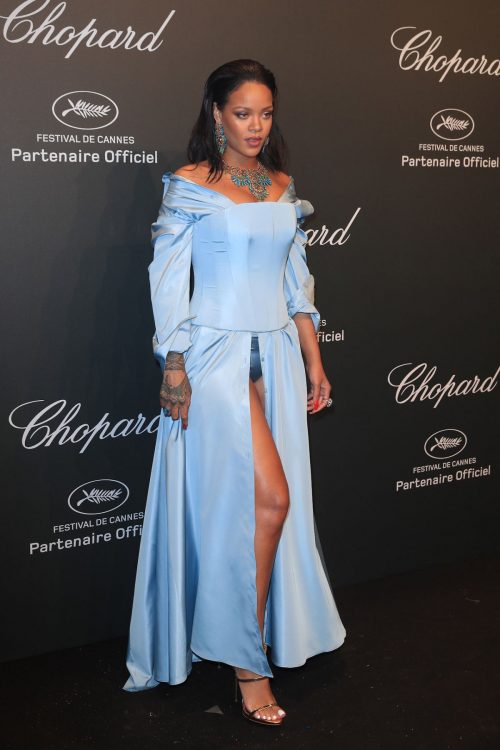 And away from Cannes, this is Rihanna again, this time in New York wearing a trouser suit by Mathew Adams Dolan. 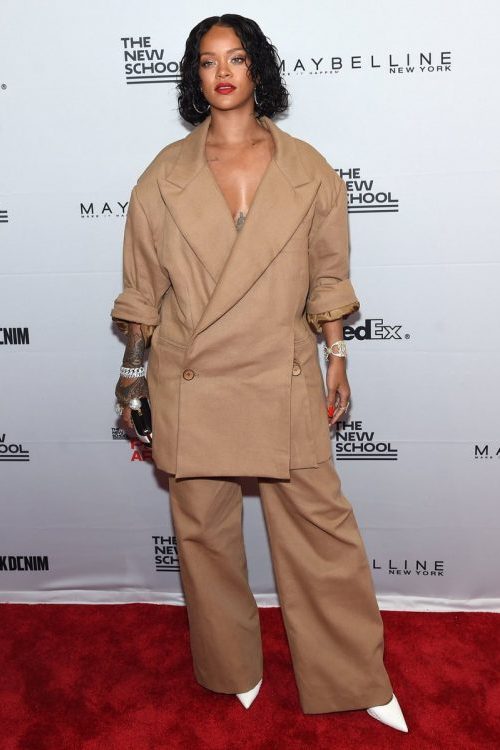 Rihanna should donate this oversized monstrosity to White House Press Secretary Sean Spicer, who likes a roomy jacket, especially one with sleeves big enough for three Popeyes on steroids. 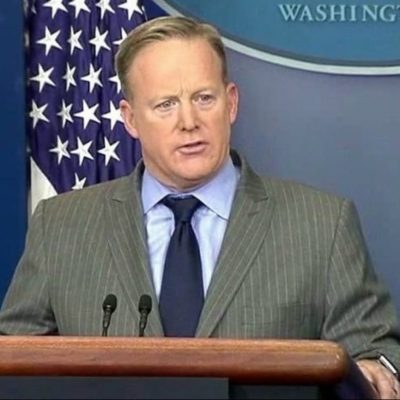 To the Billboard Music Awards where a feast of horror awaited, starting with rapper Machine Gun Kelly.

When the Fashion Police and the Earhole Police come looking for him, Machine Gun can slip into an Indian restaurant and stand up against the flock wallpaper, safe in the knowledge that he will escape detection. Meanwhile his trousers and his ankles have had a major falling-out – or are they just tucked into his socks? 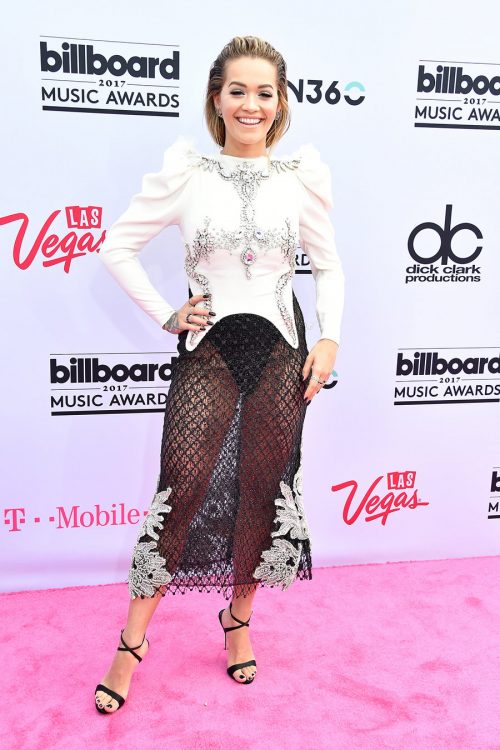 Half a couture fencer wrapped in a fishing net. And of course, being Rita, there are the mandatory arse-cheeks.

Now we have singer Halsey, quite the regular these days, wearing Juun.J.

Wearing your trench coat as a skirt whilst flashing your bra is like seeing Inspector Clouseau perform in a cross-dressing cabaret. 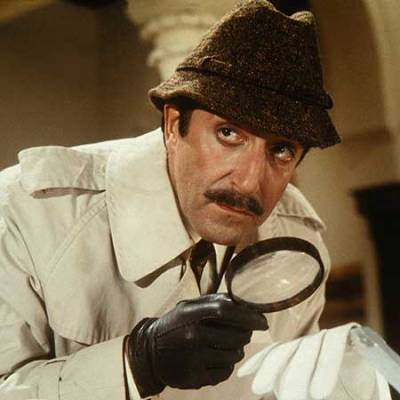 This is possibly the most annoying person ever. Meet You Tube sensation Chris Oflyng.

No, really, an urge to slap him is the automatic response of all right-thinking people. And that is before you watch him babbling on in a high-pitched squeal. He is already in his jim-jams and should be sent to bed without supper.

Of course there is singer Z Lala.

Z Lala apparently sings in 19 different languages, including sign language. The latex dress has more holes than a colander but WTF is chiefly struck by the rubber ball on her head, like a circus seal. Here is a sign to  her from WTF:

Finally, Cameroonian singer Dencia is another staple on any music awards’ worst-dressed list.

Dencia steps out (or used to) with Manchester United star Paul Pogba, with whom she allegedly had such noisy rumpy-pumpy in a hotel one night that guests either dialled 999 or complained vociferously to the management. Imagine their reaction had they caught sight of this ensemble, like a deconstructed Rubik’s Cube with Minge Mask and Dencia’s head poking out of the Rubik-ruff like a bad photoshop.

This week’s “It’s Got to Go” controversially comes from WTF aficionado Keith from Melbourne who nominates Jeremy Corbyn. Why? Let Keith explain it himself. “Simply because he’s making Australian politicians look good and that is unforgivable. How very dare he? We rightly have the monopoly on stupid, unintelligible, supercilious, shallow, self-serving, ignorant prats.  You  have Red Ken and  Missy May. Enough already. He’s Got to Go”.

OK Readers, that’s your lot for this week.  Keep those comments coming as well as your excellent suggestions for It’s Got To Go. Let us meet again next Friday. Be good  x