Democracy is a pain. You have to put up with idiotic decisions made by other people because they are more of them.  Or, in the case of the USA, there are less of them but the cockamamie system lets an orange moron win even though they are less of them. In June 2016, the majority in the UK made an idiotic decision. A catastrophic decision. We were going to leave the EU because…. because….well? In some cases, they voted to leave because they wanted their sovereignty back. In some cases, they voted to stop foreigners clogging up the system. Some voted because they were fed up with those pesky human rights, even though human rights are part of the Convention of Human Rights and nothing to do with the EU. Some voted because they wanted to give the establishment a bloody nose. That worked, didn’t it?  Some wanted to give the NHS £350m a week. Some have no idea why they voted. And others simply did not understand the facts. Even those who voted to stay. What the hell did we know about the Customs Union? What thought did we give to the Irish Border? The old saying is that in the country of the blind, the one-eyed man is king. In this country, we all seem to have glaucoma. The Prime Minister leading us out of the EU is and always was pro-EU.  The Opposition Leader who pretended to be pro-EU has always hated the EU. Opposition MPs who are pro-EU are silent. Government politicians who are pro-EU, and have been since the beginnings of recorded time,  are reviled by their colleagues, who actually agree with them, but for whom power is more important. And the lunatics are in charge of the asylum, with no idea what to do next, except to blame the foreigners who are not falling over themselves to assist us to leave them and who, for some unfathomable reason, do not see why they should give us exactly what we had before but without us paying for it. Who knew?

Which leaves us in the very strange position of trying to save ourselves from the worst excesses of idiocy by the most undemocratic body imaginable. The House of Lords. That body of arse-lickers, bank-rollers, lick-spittles, has-beens, no-marks, aged thespians, the clinically dead, retired generals, civil servants on a fuck-off pension, and those looking for somewhere to have a nice lunch and an afternoon snooze and cannot be bothered to join the Garrick, or who can be bothered to join the Garrick but cannot afford to stump up the joining fee or who can afford to stump up the joining fee, but who have been blackballed because they are too boring. No one has voted for any of them. Once in, they cannot be got out again, however heinously they may behave. And yet this shower, a group of people one would normally despise, and whose tenure is based upon privilege, politics and patronage, is all that appears to be standing between us and the slavering jaws of the Hard Brexiteers and the Daily Mail. At least whilst everyone else is changing sides and standing where they are unaccustomed to stand, the Daily Mail is exactly where we all expect it to be – screaming ‘traitor’ at anyone and everyone who stands in the way of an up-yours exit. For which relief, much thanks, otherwise none would even have the faintest idea which side is up.

Off we go to to the Met Gala, where the theme for the night was ‘Heavenly Bodies – Fashion and the Catholic Church’, a celestial chance for everyone to look like a prat and for the Daily Mail to bust a gut in outrage. Let us begin with actress and producer Sarah Jessica Parker, wearing Dolce & Gabbana. 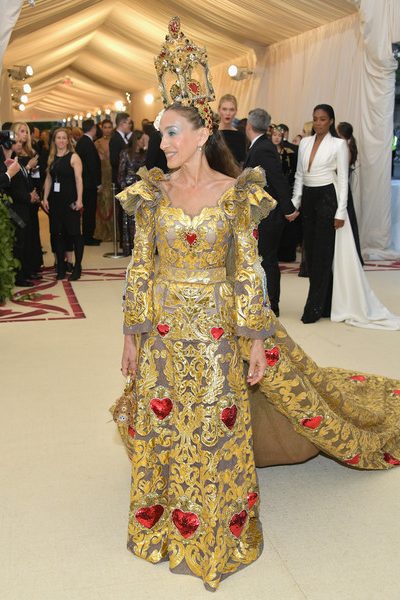 Dolce & Gabbana have dressed Sarah as the Queen of Hearts. Not Princess Diana, but the other one from Alice in Wonderland. The only difference is that Sarah is wearing a shrine as a hat. 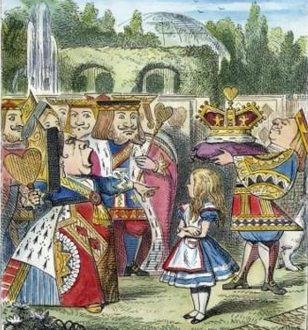 Darren has got himself on his own jacket. Honestly. Even Jesus Christ did not goeth around with a picture of Himself on his garments. And Darren is no Jesus Christ. WTF also wishes to object in the strongest terms to Darren’s trousers, which have had a catastrophic fallout with his ankles.

There is a lot going on here, and none of it good. Presumably the huge semi-skirt-train is supposed to invoke the Garden of Eden, but what the rumpled silk trewsies and the tinfoil breastplate are for, WTF cannot say.

Lewis Hamilton wearing Tommy Hilfiger, for whom he is Global Ambassador.

Are those trainers welded onto his feet? He never seems to wear anything else and they look positively preposterous with that be-jewelled suit, which is not so much communion boy as Barry Manilow in his pomp. Could it be magic? No. And Readers! He has rolled up his trousers better to show off the trainers! 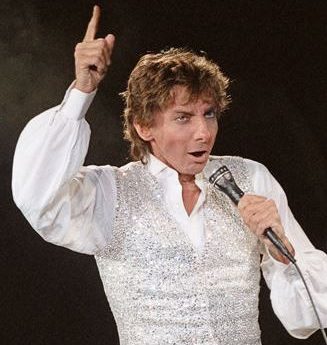 Aficionado Julia immediately messaged WTF on sight of Kris to observe that her outfit was “like a car wash roller dressed for the garage Xmas party”  She is not wrong.

Not only does his outfit have nothing to do with the theme of the night, but the lad brought along his gold record to show us! From which WTF can only conclude that Jaden loves himself so much that he regards his very presence as a religious experience.  Just. Go. Away.

Blimey, it is Joan of Arc re-imagined as a pantomime boy in kinky boots. ‘Au secours! Look behind you, Joan!!!! There are some dastardly Englishmen about to barbecue you! Boooo!’ 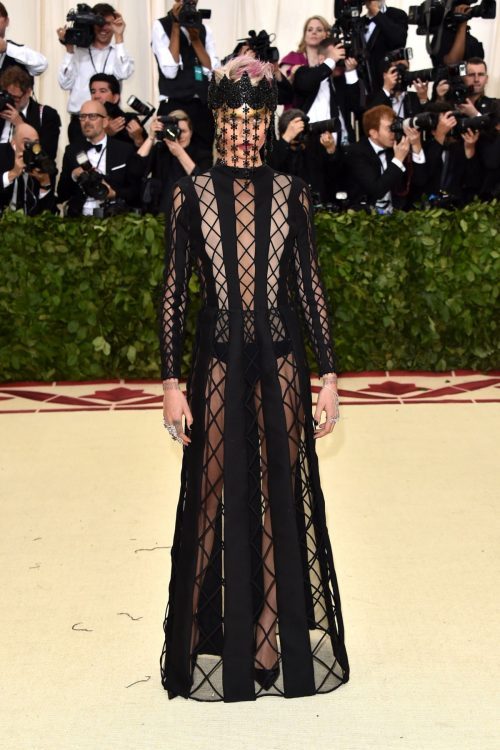 Cara has come to the party dressed as a confessional, complete with the grill separating priest and congregant. (Did she drink her champagne through a straw? Just asking). Doubtless there are many people of both genders who would like to enter, but possibly for motives that would then oblige them to go to a real confessional and be very, very, penitent indeed. 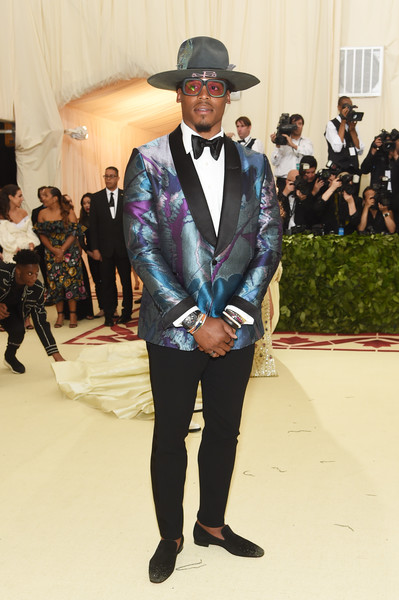 There is no reason why a Mountie in welder’s goggles should not be admitted to the Kingdom of Heaven, but Cam’s choice of headgear was a trifle unexpected. WTF has no problem with the jacket, and would even be prepared to overlook the shirt collar with wingitis and the wonky bow tie, but below the waist it all goes horribly wrong. His trousers are more snuggly than Prince Harry and Meghan Markle going through the wedding RSVPs, and he has also forgotten his socks.

The dress appears to be the result of a night of passion between Mary Queen of Scots and the Mother Superior who warbled Climb Every Mountain to Julie Andrews in The Sound of Music. All she needs are a crucifix and a wimple. 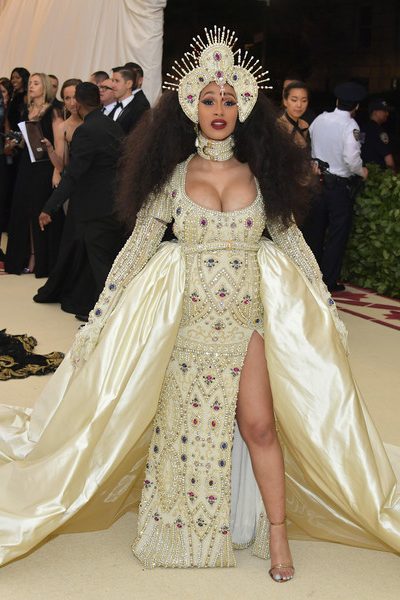 Cardi, who is pregnant, is flashing a magnificent pair of knockers, but who knew that angels could be with child?

It is indicative of the madness of this terrible trio that Alessandro looks the least loony of the three of them. Lana has been shot with arrows that have also taken out the pet bird in a basket perched on her head. Jared, who should be taken out, period, is dressed as Jesus Christ with a crown of golden thorns in a blue suit and pink pussycat bow. As a Jew, WTF is unfamiliar with the New Testament, but she suspects that a pink pussycat bow was not His outfit of choice.

Funky Chicken meets Icarus. And remember what happened to Icarus. However beautiful the dress and boots, this is just certifiably bonkers.

This is the story of St Solangé of Houston who devoted her life to promoting the risible fashions of mad designers. One day Solangé went to the Met Gala in order to help Iris, a poor little Dutch girl. Iris did not have much money and could only afford to put Solangé in a dress and boots made from reconstituted plastic bin bags. Solangé stood under the blaze of flash bulbs and TV lights on a hot, sultry, night in New York, whereupon the dress and boots melted onto her, causing her to die in hideous agony. Such was her godliness, however, that she kept smiling until the end, whereupon the Good Lord crowned her with a filigree gold halo.

This week’s It’s Got To Go comes from WTF of Islington who is totally fed up with see-through, peekaboo, wedding dresses, like this one from Pronovias.

If you want to get married, get married. But desist from flashing your fanny at the spouse and your guests. The spouse will get a chance to look at it later. Everyone else is just there to eat the canapés and get pissed. It has Got to Go.