Posted on December 1, 2017 by fashionshark

You know how it is with long distance relationships. At the beginning it is so romantic, flying across oceans to snatch weekends together, phone calls, tweets and FaceTime. Meeting up and gazing into others’ eyes, canoodling under the stars, holding hands in the Rose Garden. You get engaged, pledging eternal love. But then it all gets tricky. People carp. His friends don’t like her friends. Her friends are offended by his erratic behaviour.  He turns out not to be very nice. She turns out not to be as compliant as he thought. He insults her on Twitter, albeit that he uses the wrong account to abuse her because he is, in reality, really stupid. She responds with hurt dignity. And then, suddenly, it is all recrimination and disappointment. His friends don’t think she is the one. Her friends are calling for an end to the relationship. The boss lets it be known that there are no circumstances under which that oaf will be welcome in her house and that she fully intends to be walking the corgis whenever he comes to call. T’was ever thus….

But that is enough about Theresa May and Donald Trump.

There was another engagement this week and this one augurs better. Prince Harry popped the question to American actress Meghan Markle as she was roasting him a chicken (that is not a metaphor, you rude people, it is a culinary fact) and she accepted. They posed at Kensington Palace, smiling up a storm and clearly enamoured of each other. They got through the usual cringe-making BBC engagement interview, (why is this still an actual Thing?), recounting when and where they met, how he had proposed and what his Mum would have thought. They looked extremely happy. WTF has not got much time for the Royals but apart from that time in 2005 when he went to a party dressed as a Nazi, he seems like a nice guy and has done a lot to bring mental health issues into the open. (Here’s a challenge, your Royal Highness – have a go at getting Donald Trump to go and see a psychiatrist. Or a gerontologist. Or someone). She is self-assured, sexy, sassy and smart. And she has a beautiful engagement ring, not that hideous thing poor Kate got lumbered with.

Of course, the carpers have been out in force. Ms Markle has a cornucopia of characteristics to make the snobs sneer and the bilious Daily Mail readers boil.  She is divorced – from a Jew. She is American. She is a successful actress (male Royals have always loved an actress). And she is of mixed race. Some white people are offended that she is not white enough and some black people are offended that she is not black enough or that she does not identify as black enough. Vox pop declares her to one or all of pregnant, money-grabbing, attention-seeking, scheming and wearing her shoes too big (actually, they were). The Telegraph assembled a panel of “experts” to assess how long the marriage would last. The Spectator, the voice of Tory Toffs and Tossers once edited by Boris Johnson, opined “Meghan Markle is unsuitable as Prince Harry’s wife for the same reason that Wallis Simpson was unsuitable: she’s divorced and Harry’s grandmother is supreme governor of the Church of England”. Which is tosh because after the Queen goes, bless her, the next supreme governor will be Prince Charles, who is divorced, married to a divorcée, the nephew of a divorcée and who has a brother and a sister who are both divorced. In a multi-cultural Society, another thing to make Mail readers froth at the mouth, the Monarchy and the Church of England should be separate but that is a topic for another day. Prince Harry is going nowhere near the Throne, being only fifth in line, and after the birth of HRH Foetus, sixth in line. The best reason to cheer this engagement is the number of unpleasant, pompous, biased, bigots who have been pissed off by it. Not to mention how upset Trump will be when he sees Obama and Michelle quaffing the Krug and nibbling on a quail’s egg whilst his invitation never landed on the White House mat. Mazeltov to the young couple. Have fun.

Nicole, bless her, has now lost whatever vestige of sanity she may once have had (which, to quote Lady Bracknell, was probably not much), and is now officially quite bonkers. She told one contestant last week that his song had three of her favourite things, ‘balls, hair…..and teeth’. The eccentricity extends to her outfit which bears, or should that be bares, many of the signs of sartorial silliness, namely one sleeve, a slashed skirt and a giant crotch camellia.

To the Arias in Sydney and singer Harry Styles, wearing patterned Alexander McQueen. 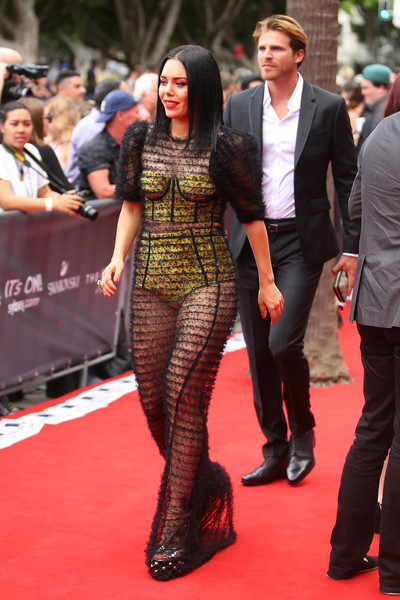 George is wearing 1950’s lingerie under black bubble-wrap which is so long that the prospects of her tumbling arse over tit are higher than those of Donald Trump offending someone before breakfast, but at least the bubble-wrap will cushion her fall.

To London and the MOBOs which were strangely muted in terms of fashion horrors, but there was rapper Stefflon Don to keep down the standards. 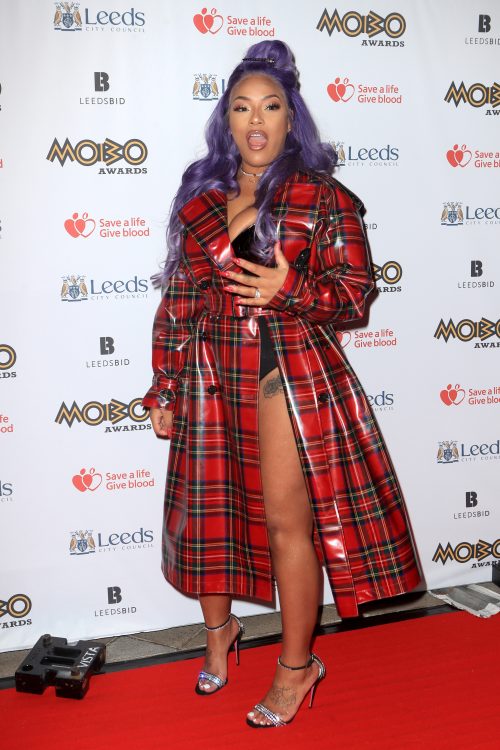 If they ever make a mashup version of Singin’ in the Rain, Pretty Woman and Trainspotting, here is the ideal costume.

Still in London we go to the ballsachingly trendy restaurant, the Chiltern Firehouse and singer Nicola Roberts, formerly of Girls Aloud.

Those trousers are amongst the worst things WTF ever did see in her life, flapping like flags at half mast, whilst the proportions of this nonsensical outfit would be appropriate for one of the Seven Dwarves. 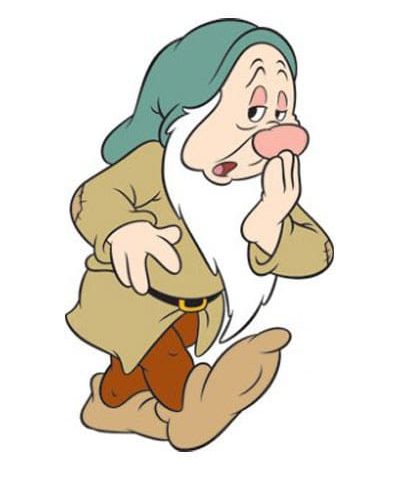 She’s back! Here is WTF’s favourite Z-lister Lizzie Cundy, a woman who serves no purpose whatsoever other than to adorn the pages of this blog, at the National Curry Awards. Seriously. 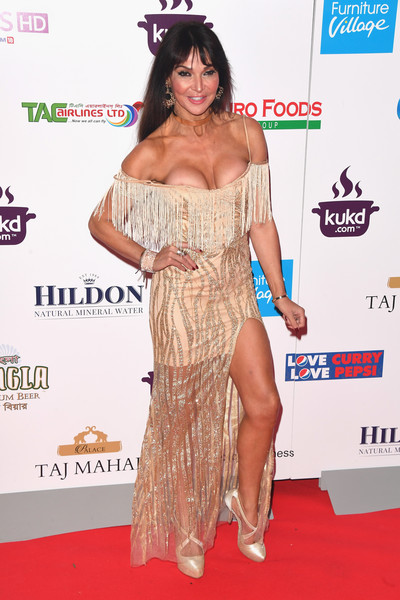 Finally, here we are in New York at the Gotham Film Awards and actor John Cameron Mitchell. This one is going straight into the contenders for the WTF Christmas Turkey.

This can best be described as off-cut couture and it is very, very bad. In fact, it left bad several miles down the road and is currently parked at shocking. And what are those shoes? They look as if someone left them out in the path of a line-painting machine, like those people who go on holiday and come back back to find the Council has painted yellow lines into their street, including over the family car.

This week’s It’s Got To Go comes from appalled aficionado Kelley from Oz, who kindly brought these “boots” to  WTF’s attention.

These horsey horrors, designed by German designer Iris Schieferstein, are a Second Amendment wet dream. Judge Roy Moore would be keener on these boots than he would be on an afternoon in the playground of a Girls’ High School. They have, without any question whatsoever, Got To Go.

OK Readers, that’s your lot for this week. Please keep those comments coming in as WTF values them like anything. And please keep those excellent suggestions for It’s Got To Go coming.  Let us meet again next Friday. Be good.