WTF spent the week debating whether she is more offended by Donald Trump Jr’s lies or his ineptitude. Don – here’s the thing. When invited to hold a meeting with “a Russian government attorney” offering incriminating stuff on your father’s opponent as part of “Russia and its government’s support for Mr Trump”, you should have said no and then phoned the FBI. Remember the Trojan Horse? “Timeo Danaos et dona ferentes” translated as “I fear the Greeks even when bearing gifts”. The same was true of the Russians. And once you did meet the lawyer, you should not have done all or any of the following:

1. When asked last year whether Russia wanted to hurt Clinton, describing the suggestion as “phoney” and “disgusting”, coming across as outraged as Fox News when faced with a Democrat;

2. When approached by the “failing” New York Times, telling them you did meet some Russian woman but you didn’t know why she was coming and assumed she wanted to flog you caviar, whereas she just banged on about adoptions, which was really boring;

3. When the actually-doing-rather-well New York Times said they knew this was a lie, admitting that you had known she was coming to give you damaging stuff about Clinton but she didn’t have any stuff and just banged on about adoptions, which was really boring;

4. Despite having made a fool of yourself, sending out a snarky tweet claiming you only did what was common in campaigns (like you’d know); in other words, you moved from “I did not collude” to “I knew nothing” to “So what if I did collude?” in 48 hours.

5. Having been told by the now-nailed-on-for-a-Pulitzer New York Times that it had an email showing you knew the woman was coming to give you material as part of the Russian government’s support for your father, releasing the emails including the one that said the information was to be given as part of “Russia and its government’s support” for your father. Oh, and the one which said that the woman was “a Government lawyer”. Oh, and the one which said you replied “I love it”. Those emails.

As for you, Mr President, most people would not leave you in charge of cleaning out their budgie cage. You spent six months descrying your campaign’s collusion with Russia as FAKE NEWS. You sacked James Comey because the “Trump and Russia” story was FAKE NEWS. Until last week you never acknowledged that Russia interfered with the US Election. Your accolytes like Kushner, Sessions, Flint and Donald Jr all forgot their various contacts with Russian officials and had to correct earlier accounts. Your son had a meeting supposedly arranged at the behest of the Russian Government and attended by your campaign manager and your son-in-law but you claim you never knew about it. You praised your son’s “honesty” and his  “transparency” even though the truth had to be dragged out of him with pliers. You now claim that any politician would have had the meeting, thus failing to distinguish between Moscow, Idaho and Moscow, Russia and after months of denying any contact at all. Why are all these people around you (a) hobnobbing with Russians and (b) forgetting to mention it? Including, apparently, to you. Hardly anyone believes a word you say. And certainly no one with a brain.

Meanwhile, where is Sean Spicer? What have you done with Sean Spicer? He has not been seen for weeks. It is time to come clean. You do not want to be tried for false imprisonment do you? You have enough on your plate. You would have to wear an orange prison jumpsuit and it is so not your colour….

We start our review of the week’s fashion frippery in Germany with Prince Ernst August Jr. of Hanover and Ekaterina Malysheva who got married last Saturday.

The new Princess looks beautiful but the same cannot be said of His Highness Prince Pudding-bowl. Your Highness, this is your wedding day. Your collar has wing-itis, your tie is wonky, your morning coat is ill-fitting and you are wearing very ridiculous trousers. They do not hug your waist, they billow at the knees and they sit on your scruffy, unpolished shoes like spats.

Where was your housemaid with an iron and a needle and thread to stop your hems brushing the cobbles? Poor show.

Now we have actress Bella Thorne out and about in LA.

If you are at the beach, fine. If you are in the street, not fine. This is a titsy waistcoat with chains instead of buttons as worn by a pervy businessman at a fetish club. And those boots are definitely not made for walking. 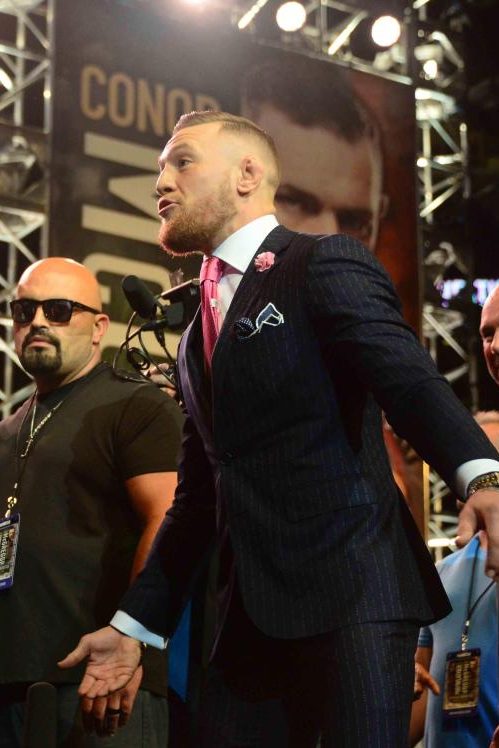 Think this is just an ordinary pinstripe suit? Look closer……

And top of the morning to you too, you rude man….. The idea is not even original as the Prime Minister of India, Narendra Modi, wore a similar purported pinstripe to meet President Obama in 2015. But his just said Narendra.

To Paris where Celine Dion has been clad head to toe in couture for what seems like weeks now. If it is hers and not borrowed, she will need to charter a jumbo jet to take it all home. Here she is, wearing DSquared2.

The jeans are not so much distressed as hysterical whilst the jacket makes her look like a medieval troubadour.

We go to Florida and Univision’s Premios Juventud 2017 where we meet Venezuelan singer Nacho Bailame.

Why is he dressed as the Artful Dodger? Are they big Dickens fans in Venezuela? Who knew? 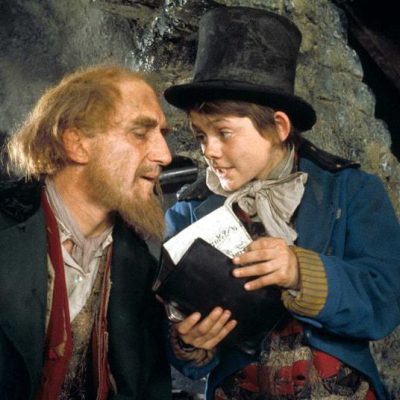 It’s a latex Barbie. We have had a Firefighter Barbie and a Pilot Barbie and a Moschino Barbie and a Wonderwoman Barbie. Now we have a Kinky Barbie with more camel toe than a caravan of camels. But, Readers, this is not the worst of it. Have your smelling salts to hand and the number of a healthcare professional on speed-dial. 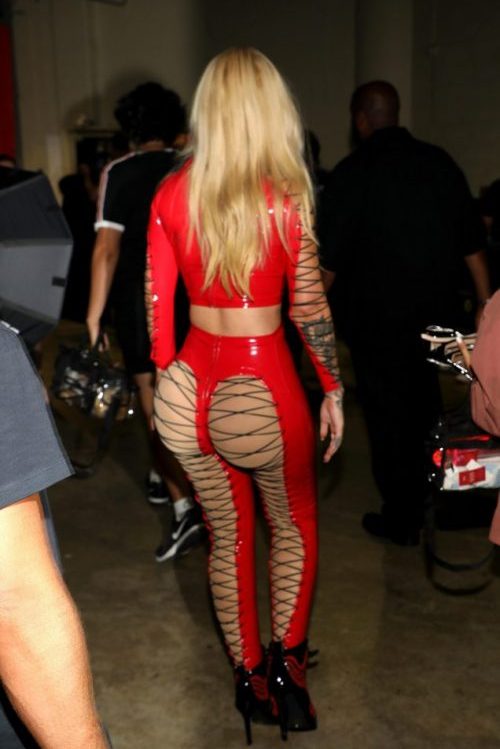 Yes it is bare bum time. Again. Think of the indentations when she sits down, like a lattice window. MAKE IT STOP!!!!!!!!!

This week’s It’s Got To Go comes from WTF aficionado Annie Bishop who has taken  exception (and rightly so) to the oeuvre of Spanish designer Palomo. This week he sent male models down the runway in some of the most preposterous outfits WTF has ever seen. Like these two… 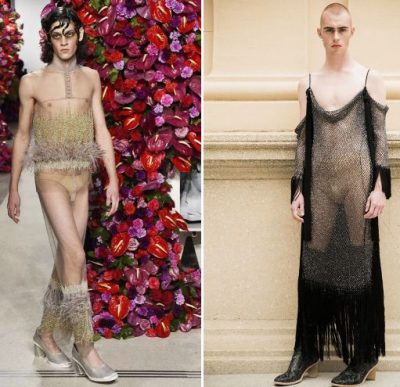 WTF likes a laugh as much as the next person, but penis pretties are just not funny. Palomo – piss off. Or Enojar as they say in Spanish.

OK Readers, that’s your lot for this week.  Please keep those comment coming in (WTF does love them so) as well as your excellent suggestions for It’s Got To Go.  Let us meet again next Friday. Be good x

4 Responses to WTF Orange is the New Orange Special