WTF is angry. Correction. WTF is boiling bloody mad. She has been boiling bloody mad since the Referendum result and every day increases her fury as the country lurches from one farce to another. And it is like snakes and ladders. There seemed a ray of hope when Boris Johnson got shafted by his mate Michael Gove and another when Gove was in turn shafted by fellow Tory MPs and his piece removed from the board.  On Friday night, Andrea Loathsome stuck the knife into Theresa May, intimating to The Times that because she had little Loathsomes, she had a bigger stake in the future of Britain than her childless rival. WTF, who has no children, went to bed in a towering rage. Loathsome claimed to have been stitched up, only to be confounded by both a transcript and a tape showing that she had said exactly what had been reported, but with more poison. It was only a matter of time before she threw in the towel, which she did on Monday with the additional bonus that her backer Iain Duncan-Smith, who had made an arse of himself all weekend muttering about smears and dark forces, had to stand by her with a face like thunder whilst she bowed out, pretending she was doing so for the sake of party unity and not because she has been exposed, yet again, as a liar.

There was more cheer on Saturday when Welsh Godbotherer Stephen Crabb was turned over for sexting a woman who was not Mrs Crabb. WTF suspects that the Good Book does not advocate telling strange women that you would like to lick them all over. Nothing like a bit of schadenfreude to raise the spirits. Things were looking up.

Come Wednesday, Cameron was forced to do an early perp walk of shame along Downing Street whilst May moved into no 10 with reassuring words to those just scraping by on their salary, promising them she had their back. But within hours came the astonishing news that Johnson had been appointed Foreign Secretary, the equivalent of asking Casanova to mind your girlfriend.  World Leaders laughed uproariously, then realised it was not a joke and reached for the smelling salts. Boris! The man who referred to “piccaninnies” with “watermelon smiles”. Boris! The man who made up a poem about the President of Turkey using the word “wanker” and suggesting that he had sex with goats. Liam Fox was also exhumed and made Secretary of State for International Trade, the man who had to resign after he took his young friend abroad with him when Defence Secretary. WTF went to bed anticipating waking up to the news that Sir Philip Green had been made Secretary of State for Pensions.

On Thursday, May transformed into Ming the Merciless. Things again seemed to be improving. Tossers were tossed overboard, Osborne and Gove and Whittingdale and Letwin and Nicky Moron, the Education Secretary with the intellect of a piece of chalk. Crabb let it be known that he was stepping away from Cabinet to spend less time with his iPhone. But then it emerged that Jeremy Hunt was still there to destroy the NHS, the idiot Priti Patel had been promoted into the Cabinet and Loathsome had also been promoted to Environment Secretary.

Meanwhile, the Labour Party continues to implode. Cometh the hour, cometh the cockup. Corbyn is still in, although 80% of his MPs want him out. His supporters resemble Moonies, damning his critics as Blairites and plotters as if those were the only reasons you would want to replace an unelectable Leader unable to Lead. When Angela Eagle (finally) challenged his leadership, she had bricks thrown through her window, death threats and vile homophobic abuse. Owen Smith, a President Hollande lookalikey of whom nobody had ever heard, has now also declared his candidacy, splitting the anti-Corbyn vote. Smith was (like Loathsome) only elected in 2010, told Welsh Nationalist MP Leanne Wood that she was only on TV so much because she was a woman and is pretending that he has only just decided to stand, although John Mann MP says Smith approached him 6 months ago for his support. Smith is obviously the Labour equivalent of Loathsome  – deluded and more than a little unreliable.  The National Executive decided that Corbyn could stand without the minimum nominations required of his challengers, which is probably right. But it also changed the rules about who could vote, disenfranchising all the Moonie-men and Moonie-women and Union stooges who had paid their £3 since January so that they could vote for him. M’Learned Friends are on standby in a frenzy of anticipation.

We have a joke as Foreign Secretary. His first full day in the job and he is the man called upon to comment and commiserate on the dead bodies lying all over the Promenade des Anglais, to commiserate with a nation whose Foreign Minister had attacked him as a liar only hours earlier. We have an Environment Secretary who does not believe in Climate Change. We have no Opposition, not even of any kind. We have death threats issued against Corbyn’s challengers. It appears that many of his supporters do not regard winning an election as of any importance.  I mean why would you want to get elected and try and change things rather than just talking to your adoring acolytes?

We start our review of the week’s fashion feculence at Wimbledon, where singer Sir Cliff Richard  was wearing another one of his foul jackets.

Admittedly Sir Cliffed is Miffed. He had child sex allegations hanging over his (nonsensically orange) head for two years and his house was raided by South Yorkshire police, broadcast live on the BBC. Nevertheless, there is simply no excuse for this getup, even if he was supporting Andy Murray. The jacket is appalling, made more so by the red tie-and-belt combo and the jazz hands pose.

Next up, we have TV person Lisa Snowdon at the premiere of Jason Bourne, wearing Emilio Pucci.

It is certainly very colourful. In the way that psychedelic vomit is colourful, i.e. not in a good way.

This is actress Kristen Stewart at the premiere of her new movie Equals, wearing Jonathan Simkhai.

This is a prime example of what WTF calls Badger’s Bum hair and it is to be deplored. Meanwhile, we are all SO TIRED OF SHEER but still it comes at us whilst we shake our fists in its direction and cry “No More! Get Thee Gone” and other such. This version comes with its own minge shield and a froufrou flounce.

Welcome back, hardy perennial singer Steven Tyler, wearing lots off horrible things made yet more horrible by their being worn together. 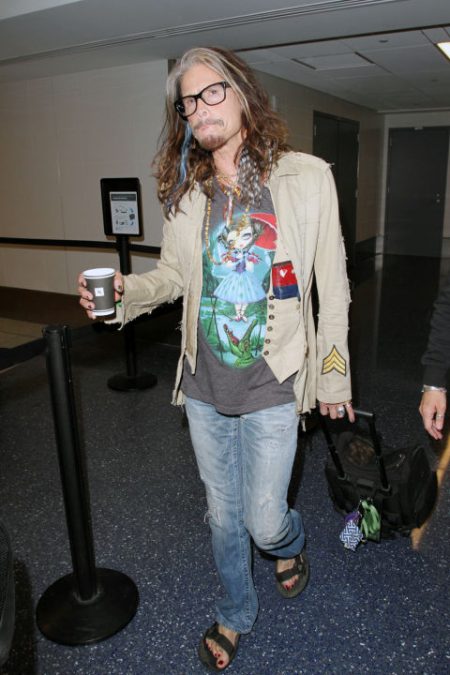 Steven seems to have raided a skip. With disastrous results.

Here is Abi Clarke off TOWIE, wearing not nearly enough.

Again I say Yurgle. Put your arse away, love. We’ve all seen it.

And this is no better. I refer to Orange Is The New Black actress Dascha Polanko at a Hip Hop Honors Event, wearing Marco Hall. 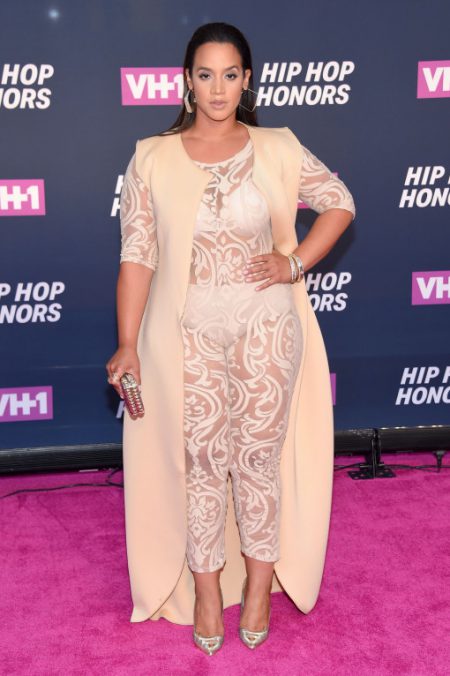 Last week, WTF aficionado Pamela Timms, aka @eatanddust, took WTF to task for including Danielle Brooks aka Taystee in the blog. Pamela’s view, expressed with vigour, was that Taystee is so wonderful that no criticism was acceptable, even when her (Danielle’s) bra was on show and she was being Danielle and not Taystee. WTF is unsure whether Pamela feels the same about Dascha’s character Dayanara but even if she does, her love would have to be unstinting, bordering on obsessive, to tolerate this horror show, which manages simultaneously to be tasteless and unflattering.

Finally, we have professional wrestler Danielle Moinet, aka Summer Rae, at the ESPYs (Excellence in Sports Performance Yearly Awards), wearing who knows that. Careful now….. 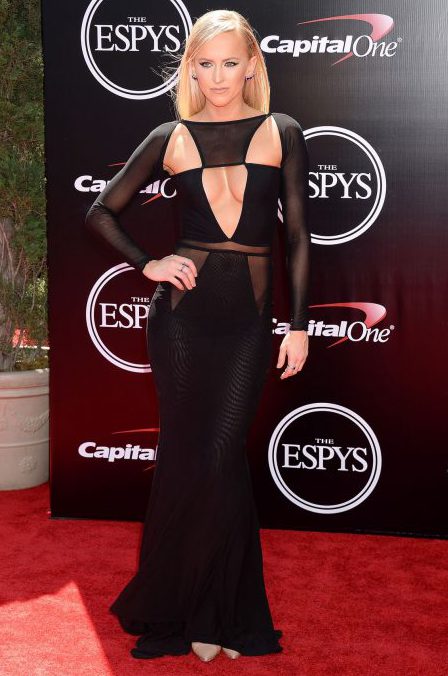 Danielle is gorgeous and fit as a butcher’s dog but no-one, NO-ONE, can get away with this shocker. She looks as if she has been dissected by Ramsay Bolton from Game of Thrones.

This week’s It’s Got To Go is directed at morons busily tweeting gory film footage of the dead and dying in the Nice attacks. What the actual fuck? Are people now unable to distinguish between games and reality?  Are they so desensitised? What kudos can be obtained from distributing a snuff movie? Is there just no respect or decency left any more?  Obviously not.

OK Readers, that’s your lot for this week. Keep those comments coming in as WTF loves them like anything, not to mention your splendid suggestions for It’s Got To Go. Let us meet again next Friday. Be good  x