So we had the seven-way Leaders’ Election Debate after all, lined up behind their lecterns like the Seven Dwarves and kept in squabbling order by ITV’s Julie Etchingham who was done up in a dental nurse’s uniform. There was a clear winner but unless you are resident in Scotland, you can vote neither for her nor her party.  I refer to the First Minister of Scotland and Leader of the Scottish Nationalist Party, Nicola Sturgeon who was focussed, persuasive, a master of the facts and generally awesome. Sadly, Nicola is not standing for Parliament and she does not want Scotland to be part of the United Kingdom so she could be the political equivalent of Indira Gandhi, Hillary Clinton and Aung San Suu Kyi but we non-Caledonians cannot have her, only a tantalising glimpse of what we haven’t got and wish we had. The answer is clear. We should reverse the rest of the UK into Scotland. Failing that, we could vote Labour and get her to boss Ed Miliband about in a Coalition. Simples.  Natalie Bennett and Plaid Cymru’s Leanne Wood, fetchingly got up like a character from Mad Men with beehive and cardigan, were somewhat overshadowed by Sturgeon but set out their beliefs and principles and Wood got extra points for telling Nigel Farage where to shove his racism. They didn’t shout and they didn’t snipe. It was a nice change.

As for the men, Ed continued to astound the public by showing them that he could walk and chew gum at the same time although he would be well advised to lose that Moonie stare into the camera which proved to be quite unnerving. Nick Clegg was smooth as a baby’s bum, roundly condemning the Tories and seemingly forgetting that he had been in Government with them for five years. Not to mention the fact that he broke his promise on tuition fees even before he’d got to his new office. Nigel Farage, sweating up a storm and attired in a pinstripe suit that sent viewers scurrying to the bathroom for their migraine tablets, mentioned Europe in every sentence and then self-destructed by referring to the NHS sinking beneath the weight of HIV-infected foreigners. Oh…and there was David Cameron who apparently is the Prime Minister. During the debate he faded away like the Cheshire Cat in Alice in Wonderland so that only his smirk remained. But Readers, if you want to hear more from our Glorious Leader, be of good cheer. This week, Dave spoke at length to Heat Magazine. Why fuck about with six rivals or suffer the indignity of a dressing down from Jeremy Paxman when he could sit in his armchair at No 10 and answer questions about whether he prefers ketchup to brown sauce? Dave further revealed that he was related (albeit distantly) to the Kardashians. If he has to relinquish that armchair come 8 May, he can always go for a guest slot on their reality show – assuming of course that they know who he is.

We have a bumper week of fashion horror this week which is just as well as it will have to last you until 17 April. (WTF is off to Cornwall for some bracing sea air). We start at the Nickelodeon Kids’ Awards in Los Angeles with the former Mr Mariah Carey Nick Cannon wearing an orange suit and Christian Louboutin loafers.

Nick is dressed as an extra from Guys and Dolls and looks exactly like a walking Starburst sweet complete with Tetris shoes and a navy Fedora. Epic… 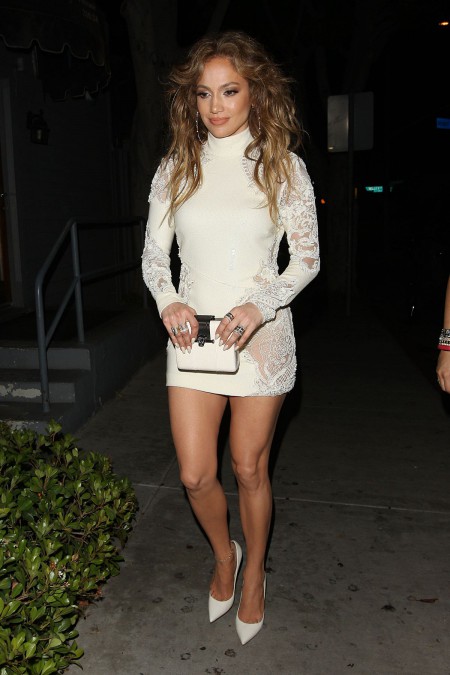 Hair like Medusa, buckets of makeup, white stilettos, peekaboo panels and way too short. At a show for kiddies. What’s not to dislike?

WTF hates pleated tits almost as much as she hates conical tits and this dress has both as well as the ugliest tit-seams in the history of ever. And the dress also has peek-a-boo panels which WTF hates almost above all things AND a stupid swooshy thing. Shocking.

The iHeartRadio Awards in Los Angeles must have set a new record for the number of excruciatingly dressed people in one place. Let us begin with singer Justin Timberlake wearing Versace.

Whatever the prize was for, it was certainly not for the suit. The colour is fine but the jacket is from the Norman Wisdom School of too-short-too-tight and the sleeves and crotch have more rucks and creases than Tracy Emin’s infamous bed.

The side view is worse.

The cheap B&Q lampshade skirt and the shiny robot boots with jelly-baby heels are hideous but the smoked perspex tit-guard like a police riot shield is beyond perspexing. Is she a messy eater or is she worried about being pelted with eggs? Raf Simons certainly should be…

The fool who advised Mike to dress up as a Pantone colour chart with white loafers two sizes too big for him must be praying that he does not unleash a  right hook upon seeing this photograph. Because if this is not provocation, WTF does not know what is.

Then there was actress Jessica Szohr wearing Bec and Bridge.

Tutankhamen meets Aphrodite, having both got dressed in the dark – and it doesn’t even fit. No wonder poor Jessica is grimacing. The rest of us certainly are…

Say hallo to Boy George. Who knows where he got this outfit? 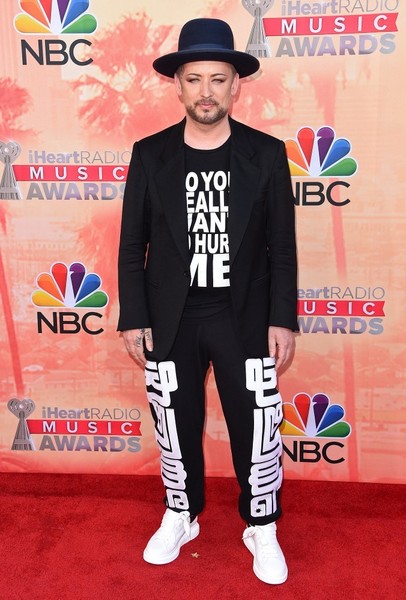 The writing on the trackie bottoms is probably squiggle for pillock. And what’s with the Lubavitch Rabbi hat?

Now this is a treat. Meet Carice van Houten (aka Melisandre from Games of Thrones) wearing Martin Grant.

Given the way that Melisandre carries on, sacrificing people willy-nilly (with emphasis on the willy), it will be useful for her to have a bin-bag skirt so that she can simply wipe away the blood splashes. Plus she can reverse it and use the plastic side as a ground sheet for rumpy pumpy.

And then there was a person going by the name of Lord KraVen,  a “singer” of whom WTF had previously been blissfully unaware, wearing an outfit of his own design….

This is very Game of Thrones and twice as camp. At first glance it is not easy to see which bits are his and which bits aren’t, like a weird creature thing emerging from a pair of leather topboots. In fact this is a trompe l’oeil with the knitted leather tunic overhanging leather trousers over leather bootees. And those eyebrows are like the McDonalds’ arches. 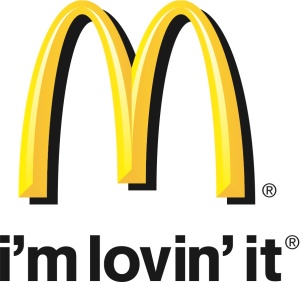 Setting a new low even for her we have Madonna wearing Alexander Wang. 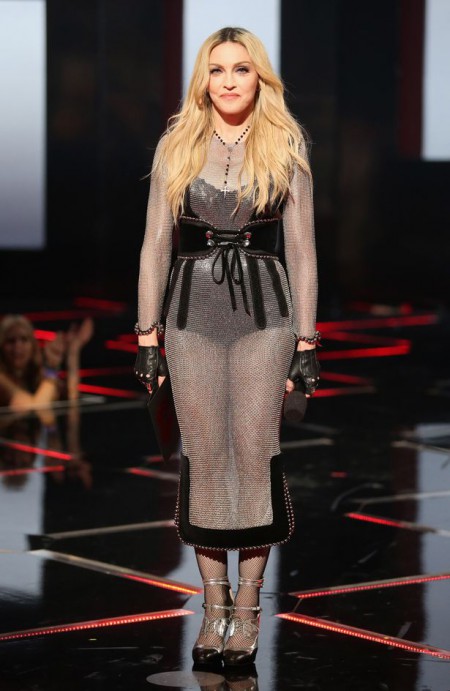 Frankly this is more Alexander Wank and Madge seems to be standing in a sieve held on by that ridiculous belt. Wank showed this on the catwalk with only panties underneath so we can but be grateful for Madge’s black opaque body but any bonus points gained for that are instantly deducted for the fishnet tights, the badger’s bum roots and the driving gloves.

Finally, is it a bird? Is it a plane? No, it’s Beyoncé at the launch of hers and Jay-Z’s new music streaming service, Tidal, wearing LaQuan Smith. 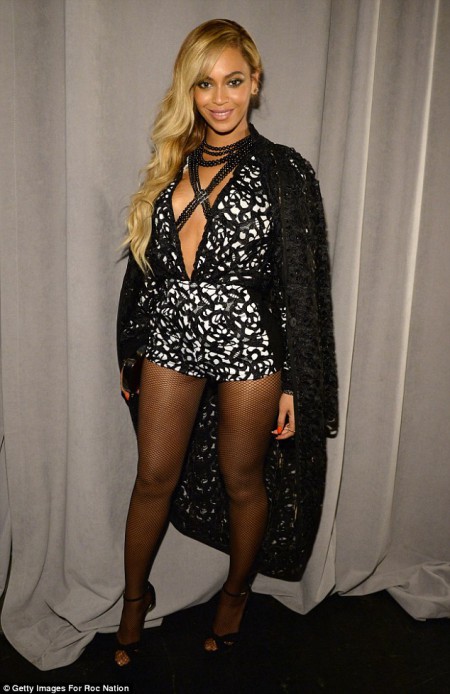 Jay-Z was wearing an old sweatshirt and trousers but for some reason his wife decided to pitch up at a daytime event dressed as  Superman’s baby sister complete with nappy, tits, fishnets (with open toed sandals!!!!) and a lace cape. She wasn’t performing onstage so did she just want to hog the limelight? She wouldn’t do that – would she?

This week’s It’s Got To Go has been nominated by a number of Readers appalled by the ghastly Kay Burley who is making her second appearance in this section and for good reason. What has got them (and WTF) all hot and bothered was Kay’s moderation of the first election non-debate between Cameron and Miliband. Well I say between – they never actually shared a stage. Not only was Kay so far up Dave’s bottom that you could barely see the soles of her shoes but she gave the most partisan display of partisanship since the Stalin show trials. Sadly Kay’s high opinion of herself is not based on anything concrete like talent. She has definitely has Got To Go.

OK Readers, that’s your lot for this week. Keep the comments coming in as WTF just loves reading them as well as your suggestions for It’s Got To Go and let us meet again on 17 April 2015. Be good and don’t overdo the chocolate eggs. x