A cake is not homosexual, heterosexual or bisexual – it is a cake, a confectionary, something with no nutritional value that tastes nice, a passing moment of pleasure on the tongue. So how did a £36 50 gâteau end up being litigated in the UK Supreme Court at a cost of gazillions with m’Learned Friends gambolling around Lincoln’s Inn Fields shouting hurrah and breaking open the Krug?

Gareth Lee went into Ashers, a bakery in Belfast, and ordered a cake. He asked for it to be iced with the message ‘Support Gay Marriage’ and a picture of two cartoon characters, Bert and Ernie. Originally the shop took his money, but then it phoned him a few days later to tell him that as Christians, the owners could not fulfil the order because they fundamentally disagreed with same-sex marriage. Years of litigation later, the Supreme Court held that Mr Lee had not been discriminated against as a gay man because anyone, gay or straight, who asked for that message on a cake, would have been refused – it was the message and not the man. Had Mr Lee ordered a cream horn or a lemon drizzle, there would have been no problem. There was a stronger case that he was being penalised for a political belief, but the Court said that the owners’ rights under Articles 9 and 10 of the Human Rights Act meant that they could not be forced to support or participate in putting out a message – any message- with which they disagreed.

Oh the irony! Many of the people applauding the Supreme Court for upholding Ashers’ freedom of expression were probably the same ones who berated their Lordships last November for holding that Article 50 could not go ahead without a prior vote by Parliament. The Daily Mail, which had spat feathers over that decision, and had disgracefully called the judges ‘enemies of the people’, now purred over the judgment. Editors at The Mail, and those who read The Mail, would rather go on a Gay Pride March dressed in a sequinned jockstrap than say anything good about the Human Rights Act, but suddenly they could see the point of it; in their eyes, it allowed Christians to repel the traps set by troublemaking, rabble-rousing, gays who had the temerity  to  order and pay for a cake supporting the right to same-sex marriage. Northern Ireland, still in the grip of religious Neanderthals, is the only part of the UK where gays cannot marry or have a civil partnership.

Be that howsoever it may be, how is baking a cake actually supporting gay marriage? Does Ashers condone palpably unsuited young couples blowing a fortune on a wedding where the planning takes longer that the marriage lasts? No one asked them to ice the cake with ‘Ashers Supports Gay Marriage’. It is not even like printing a teeshirt where your name is on the inside label or publishing a book with your name on the spine. No one asked them to go to the End Homophobia event in Bangor Castle where Mr Lee was bound with his cake. No one made them dress up as members of Village People. Does religion not make you more disposed towards your fellow man? Obviously not…..

Let us turn our attention to the sartorial scandals off the week, starting with First Lady Melania Trump in Egypt, wearing Ralph Lauren and Chanel pumps. 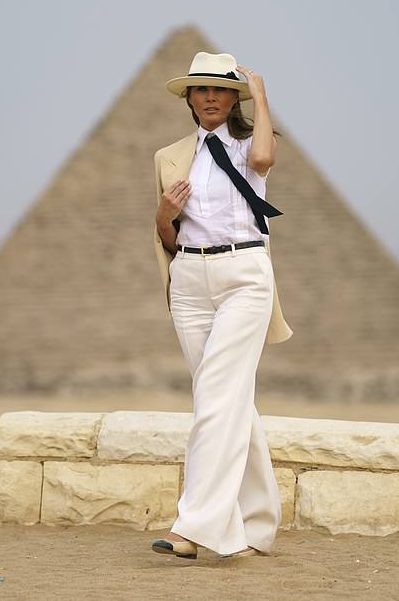 She looks ridiculous, a throwback to the 1940’s in very unflattering trousers and a necktie. It must have been 90 degrees out by the Pyramids.  Has she modelled herself on Paul Henreid in Casablanca?

Next, the preposterous Kim Kardashian at the Tiffany & Co party in New York, wearing Rick Owens.

Rick Owens be damned, this is an old bedsheet wound randomly around Kim’s inflated plastic person. She looks as if she is carrying a child in a papoose on her bum. As for her face, you would get more movement in an odalisk.

To the American Music Awards in LA where sartorial horror was in its usual abundance. We start with TV realitee person, Amara la Negra, wearing Valentino Omar Designs.

She is titsy and fluorescent, each trouser leg has got its own train and the shoulder pads would make Joan Collins sigh with nostalgia. But WTF’s chief preoccupation is with Amara’s hair. It looks as if someone or something has sliced a quarter of it off, like dividing up one of Ashers’ cakes.

If a parachute got married, this is what it would look like….

Sorry, but this is a hanging macramé potholder. It is much less mingey than the usual Julien Macdonald creation, but that is the best that can be said for it. 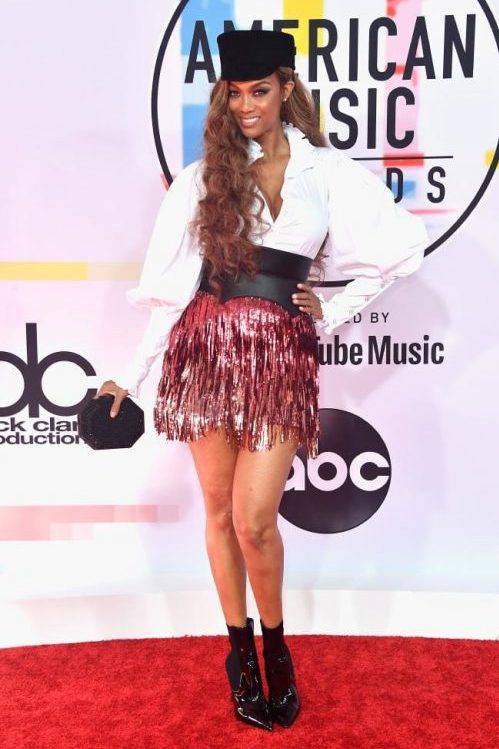 She is wearing a Christmas decoration as a skirt and the hat worn by Perks the Porter in the Railway Children. 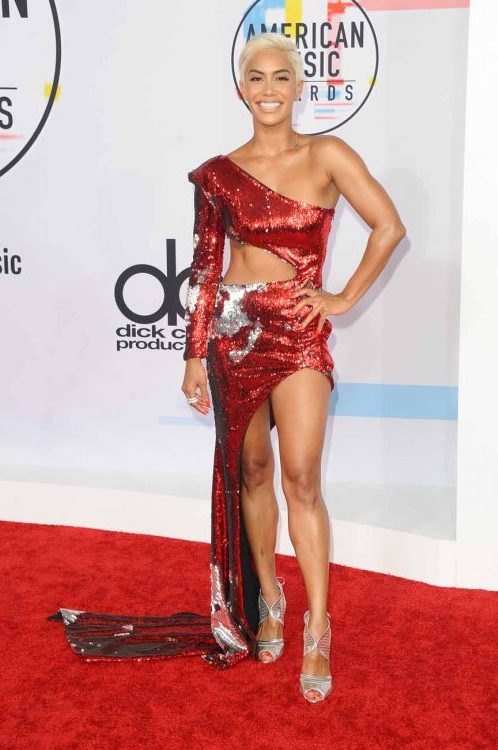 Great body but where’s the dress? It is as if her clothes have been ripped from her in a fight – which she lost. Bigly. And there is a very imminent Minge Moment. Yurgle.

WTF had hoped we had got over the sheer panel nonsense but it appears that we have not. So here is lovely Laura in a net curtain promising a fleeting glimpse of arse cheeks. Make. It. Stop.

Ashlee looks OK apart from the terrible choker thing, like a dog lead, but her husband needs to sort himself out ASAP. The  moustache makes him resemble a cut-price Leonardo di Caprio and he is wearing a suit made out of furnishing fabric with neither shirt nor socks, with his trousers engaged in a Mexican standoff with his ankles. 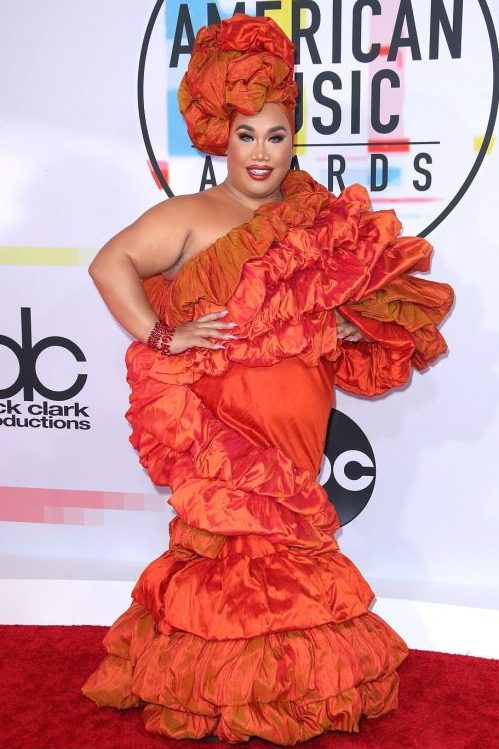 He looks like a giant mutant dahlia with plump arms and eyebrows.

Singer Poppy.  Who the hell knows what this is? 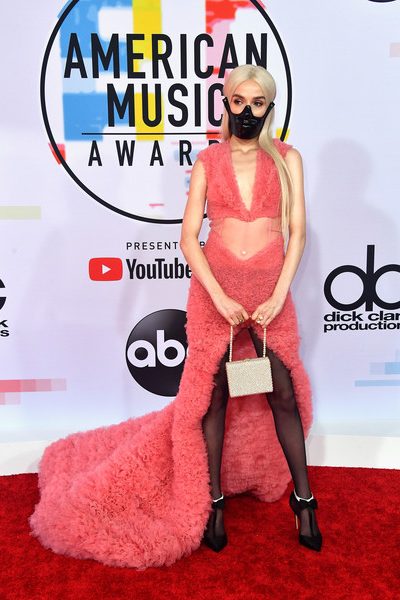 The outfit stinks, but was it really necessary for Poppy to wear a mask? Or has she caught a cold? She will, wearing only that shocking pink poodle outfit with genitalia curtains threatening a glimpse of her unmentionables (thank goodness for the tights). 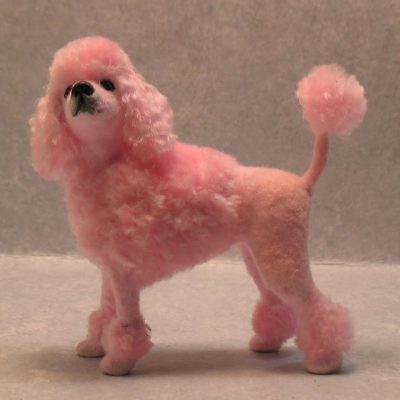 And honestly poppet – go and have a sandwich. The last time WTF saw arms like that, they were on Olive Oyl. 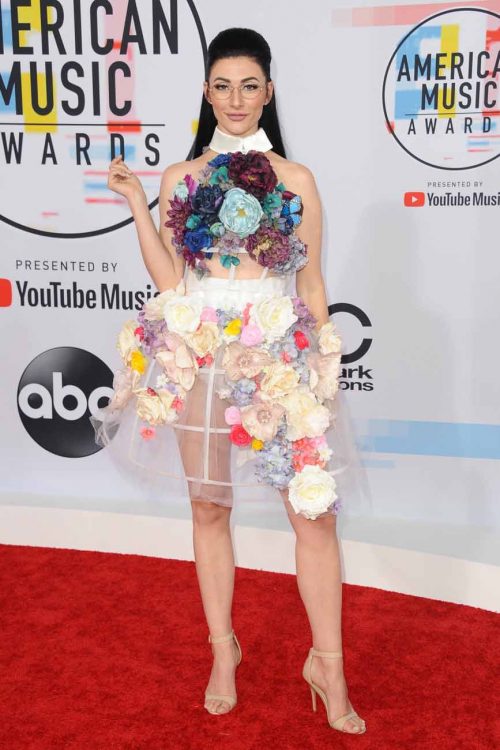 Is she about to dance around a maypole? And it appears that someone has picked some of the flowers on her skirt, leaving her panties on display.

This week’s It’s Got to Go comes from WTF Aficionado Pete Clarke, who has brought this revolting male grooming product to WTF’s attention, yours for only £5 95. 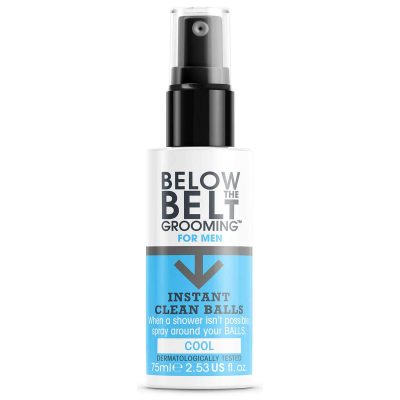 OK Readers, that’s your lot for this week. Last week you sent in some excellent comments and some tip-top suggestions for It’s Got To Go and WTF was as happy as happy can be. Keep them coming, Let us meet again next Friday. Be good.