You know when you invite someone to dinner and they just stay on after everyone else has gone home, drinking their way through your booze and ignoring your scowls, yawns and heavy hints to leave? Eventually, you are forced to offer him the spare room just so you can get some sleep. Next morning, he is up demanding a cooked breakfast, freshly squeezed orange juice and coffee whilst hogging the hot water and clean towels. That evening, he is still there, waiting for his dinner. And he just stays. And stays. And stays. Now multiply that by half a decade. That is Julian Assange, who has been holed up in the Ecuadorian Embassy in London since 2012 to avoid arrest. He does not like it there. His living quarters are spartan, a small bedroom converted from a ladies toilet, with a bed, a sunlamp, a running machine and internet access. The Ecuadorians, who took him in for reasons they probably can barely remember, hate the sight of him and want him out. The Met Police lurk outside, at huge expense to the taxpayer. No one is happy.

This week, Assange sent M’learned Friends to court to ask the Chief Magistrate to discharge the arrest warrant against him. That warrant is extant because he skipped bail, stuffing his sureties in the process, and sought refuge in the said Embassy to avoid being shipped out to Sweden to face charges of rape. Assange maintains that those charges were trumped up so that, on arrival in Sweden, he could be extradited to the US to face charges of publishing State Secrets on Wikileaks. M’Learned Friends argued that as the Swedes had got fed up and dropped the charges (one of the charges is now time barred in any event), the bail matter was disproportionate and should also be dropped, and that he has been punished enough after so many years of house arrest in the Embassy, suffering from depression, deprived of natural light, a dentist and his liberty. It was, it was said, the equivalent of a prison sentence.

The Chief Magistrate was unimpressed. She pointed out that it was not for Assange to dictate how the law should operate. He had skipped bail, which is an offence. She felt that he was not detained in the Embassy; he had chosen to enter it, he was free to leave it at any time, people could come to visit him whenever they wanted, he could eat and drink and retire to bed when he chose and that denizens of HM Prison Wandsworth might well prefer his living conditions to their own. She might have added that Pamela Anderson was able to visit him. And Nigel Farage could come as well (actually, the old lags definitely have the edge on that one). In short, she ruled, he could fuck right off. And so say all of us.

Assange’s whining, deluded portrayal of himself as a cross between the Prisoner of  Zenda and Nelson Mandela on Robben Island could not be less accurate. How likely is it that he will be extradited to the US when Donald Trump proclaimed during the US Election campaign “I love Wikileaks”? And how can you allow Assange to skip bail unpunished? What happens at Knightsbridge Crown Court when some hardened criminal declines to appear on charges of burglary and GBH on the grounds that what applies to Assange should apply to him as well? It may not be as luxurious as the nearby Carlton Tower, but Assange is in the Embassy because he is unwilling to face arrest were he to leave. It is a self-inflicted wound. He is no hero. He is a weaselly, self-aggrandising, delusional, coward. He can either stay there and rot or the Ecuadorians can stop serving him food and starve him out. Either way we have all heard more than enough from him.

We start our survey of the week’s sartorial stupidity with the 2018 NME Awards in a rain-soaked London and rapper Stefflon Don. 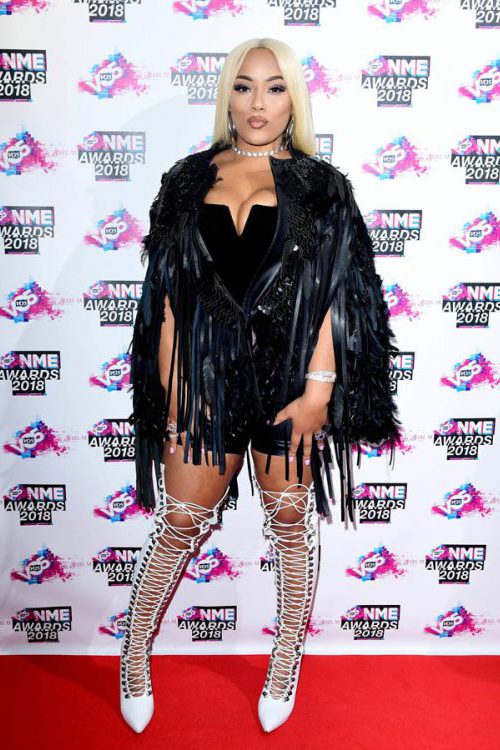 Stefflon resembles a titsy bird of prey in lacy boots.

The rest of the post is from New York Fashion Week and what a dismal collection of people await you, starting with Beyonce’s stylist Ty Hunter, wearing Younhee Park at the Concept Korea show.

He looks like an extra from Crouching Tiger, Hidden Dragon. What is he supposed to be? He has very large feet in very shiny shoes, like a clown, which is fitting. 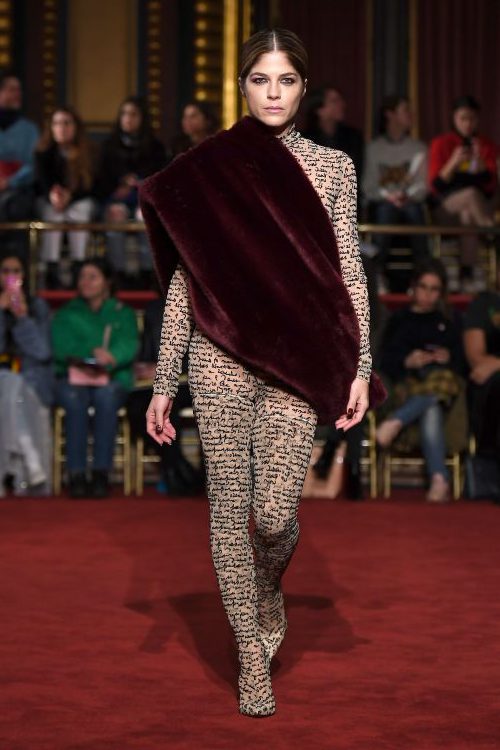 Selma seems to have been scribbled all over by a particularly exercised schizophrenic and she is wearing what looks like a slanket. What is the point of wrapping a slanket around your torso when the wind is whistling up your wotsits?  What happens when you want to do a wee-wee? And why on earth is her body-stocking worn over her shoes? 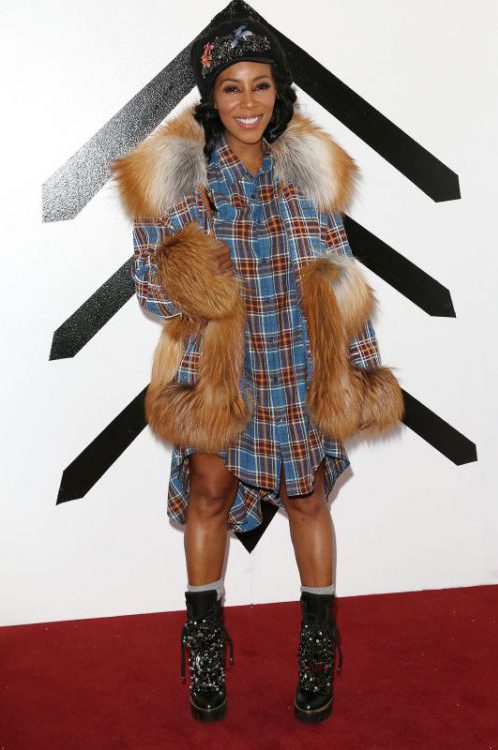 This is the lovechild of a lumberjack and a giant red squirrel with sparkly bootees and a silly hat.

Call her old-fashioned, but WTF is struggling to understand how a pair of frayed and grubby bloomers constitutes fashion. Ping is dressed for yet another film version of 50 Shades of Filth, this one set in the Victorian era, in which our heroine does the dirty, kinky-style, with the Master of the house.

She is lovely and her smile is infectious but there is more droopage than an overladen azalea plant and it is, ahem, somewhat tight around the lady parts. 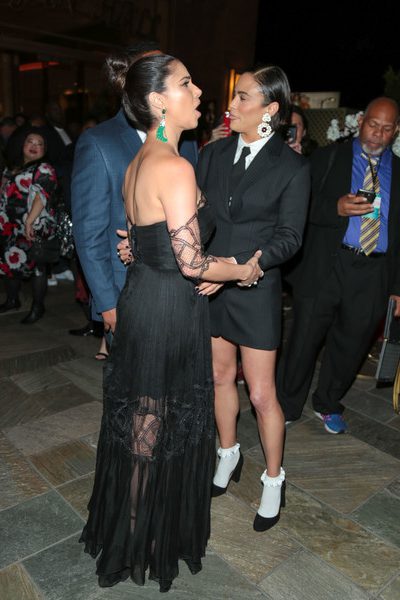 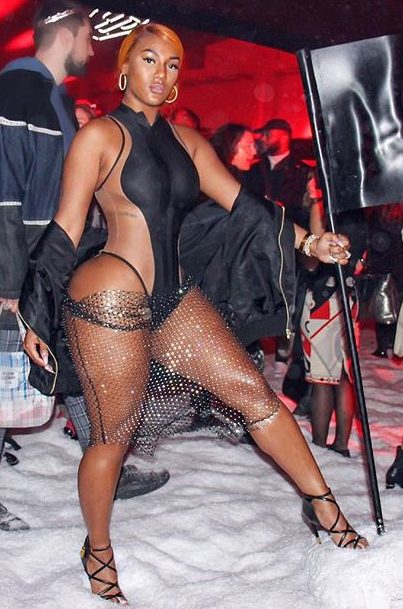 This falls squarely into the category of “That is not even clothes”. Everything is either on display or looks as if it is about to be.

Those are two of the most improbable tits WTF ever did see in her life, like a couple of bald men hiding behind a bandana, whilst the shorts, complete with mesh and minge magnolia, are to be deplored.

And finally, makeup artist Amra Olevic and Sammy M (no, WTF doesn’t know who the hell he is either) also at The Blonds show. Careful with this one.

Amra, who is a Kim Kardashian lookalikey, is displaying gargantuan amounts of tit and it is 50:50 whether the imminent Minge Moment will happen before or after the imminent Nipslip. As for Freddie Mercury lookalikey Sammy, his outfit is as silly as anything WTF has seen for a long time. Kilts are supposed to be worn with a sporran, not a bumbag, whether Gucci or otherwise, and with some species of shirt or top. In Scotland, they toss the caber. Sammy, alas, just looks a tosser. 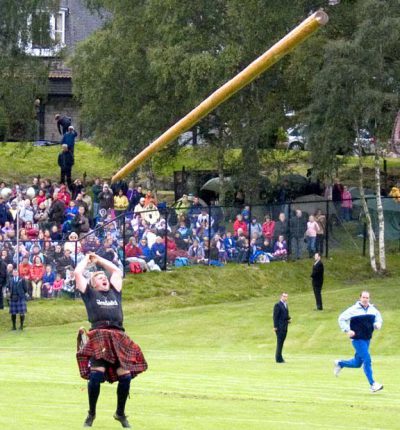 This week’s It’s Got To Go comes from WTF aficionado Yvonne from Jedburgh, who is rightly upset about Tory MSP Jeremy Balfour. Balfour attempted to table an amendment to the Scottish Security Bill in the Scottish Parliament “to review the eligibility of terminally-ill people for benefits if they are still alive after three years.” Yvonne says that this is a new low for a Tory. She is right. What is supposed to happen? Is someone to go round to the terminally ill person’s house and tell them hurry up and die? As often, one is put in mind of the words of Lady Bracknell when told that Algernon cannot dine with her that night because his (made-up) friend Mr Bunbury has taken a turn for the worse. “Well I must say, Algernon, I think it is high time that Mr. Bunbury made up his mind whether he was going to live or to die. This shilly-shallying with the question is absurd”. Mr Balfour has SO Got to Go.

OK Readers, that’s your lot for this week. WTF enjoyed your top comments last week and welcomes back Andrew Purcell after an illness – he has been much missed. There were also some excellent suggestions for It’s Got To Go. Let us meet again next Friday. Be good x