In 1980 Robert Mugabe, a clever, educated, erudite, passionate, man who had spent much of his life either in prison or in exile, was elected as Zimbabwe’s first black Prime Minister. The country’s fertile soil then produced an abundance of maize, cotton, soybeans, wheat, tobacco, roses and vegetables and it was known as the bread basket of Africa. It has diamonds, platinum and a wealth of minerals. An exciting new age of freedom and prosperity dawned. And then it all went horribly wrong.

Zimbabweans, both black and white, and equally frightened for the future, fled the country, taking with them their know-how and their skills. Violence was endemic with Mugabe’s Fifth Brigade murdering at least 10,000 people in Matabeland. Protest was repressed, often with torture. In 1987, Mugabe became President and remained President for 30 hideous years. When his economic policies failed, he naturally blamed the remaining white population for the nation’s ill and sanctioned the expropriation of farms, but the new occupants proved unable to run them and so the crops failed, inflation soared, and people were hungry. Elections were rigged. The freedom fighter had become the enemy of freedom. And he went on. And on. He is now 93 years old.

Mugabe may have been a Marxist but his lifestyle was hardly abstemious. After his wife died, he married his former secretary Grace, 41 years his junior, in a lavish Catholic ceremony. Grace had been his mistress for years, had borne him two children and was a (recent) divorcée, things which might normally be impediments to the full ritual. Their first married home was a palace supposedly purchased with Grace’s “savings” whilst their second palace cost £26m, “a gift” from Mugabe’s party Zanu -PF as a “thank you”. They have an estate in Malaysia and a home in Hong Kong and there are allegations of their amassing millions through flogging diamonds from a Zimbabwean mine. Grace shopped until she dropped in Paris and Hong Kong, only she was dropping Zimbabwe’s money rather than her own. WTF suspects that by then the Mugabes could not tell the difference or didn’t care.

Two weeks ago there was a bloodless coup, albeit that the Army insisted that it was not a coup, an impression somewhat undermined by the sight of Maj-General Moyo, in fatigues and beret set at a jaunty angle, appearing on TV to announce that the President was under house arrest. Mugabe declined to resign and a Bill of Impeachment was drawn up. For murder? For torture? For repressing freedom of speech and human rights? Of course not. Instead, he was charged with being very old and allowing Grace to prepare to replace him. WTF is no fan of Grace Mugabe, Heaven knows. But was Mugabe’s worst crime that he was a nonagenarian who failed to keep proper control of his wife?

On Tuesday, Mugabe finally stepped down to be replaced for the interim by Emmerson Mnangagwa, 75, the former Vice-President sacked in September at Grace’s instigation. Mugabe and Grace have been granted immunity, promised safety and allowed to remain in their gracious home, the one “paid for” by Zanu-PF as a thank you for ruining the country and bringing misery to millions and Mugabe will even get his pension, not that he needs one. Joy seemed unconfined as people cried and danced in the streets but what chance of a happy ending? Think about it. Why would Mnangagwa, a man who stuck to Mugabe like shit to a blanket for nearly 40 years, suddenly bring freedom of speech, democracy, riches and justice to a country denied it by the very Government in which he played so willing a part? He and Grace had been jockeying for position to succeed the increasingly frail and ailing Mugabe and just before his dismissal, she described her rival as a serpent whose head should be crushed. Had he not been thrown out on his ear, would he not have stayed on, professing loyalty to the monster he served for so long? One can but hope that he will bring change, including of himself. Because change is desperately required and after 37 years, Zimbabwe and Zimbabweans deserve so, so, much better.

Let us turn to our review of the week’s woeful clothing. First up we have model Candice Swanepoel at the Victoria’s Secrets Party in Shanghai, wearing Aadnevik.

Aardvark has taken a Barbie doll dress, called it a bodice and attached it to a pair of large lacy panties with its built-in crotch curtain.

The back is also bad.

This is typical of Julien’s oeuvre, a spider’s web with a ‘This way to My Vagina’ arrow and a matching chest strap. Titsy, tacky and tawdry. As usual.

Next up we have singer Miley Cyrus on the set of The Voice, wearing Agnes Ruiz de la Prada.

Twitter exploded on seeing Miley, including WTF aficionado Sue Peters who immediately tweeted WTF in great indignation. Miley is only 5′ 5″ and was somewhat swamped by this mutant shower puff. Not that anyone could have worn it. 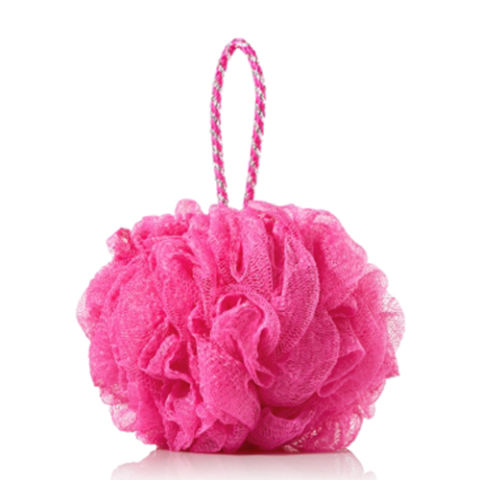 To the American Music Awards, always a rich source of silliness, starting with singer Macklemore. 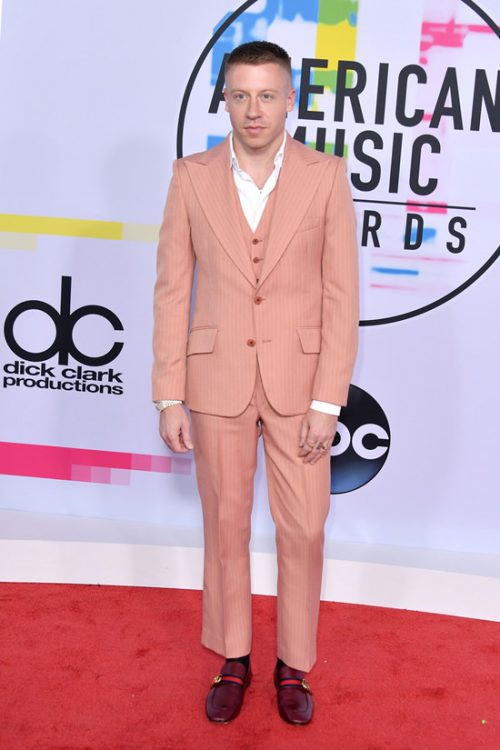 Macklemore paid $75 for the suit, which is $70 too much. A pale pastel suit is very Don Johnson in Miami Vice but (i) Don wore two pieces and not three and a tee, not a crumpled shirt (ii) his trousers were always in close proximity to his ankles and (iii) he was in Miami. 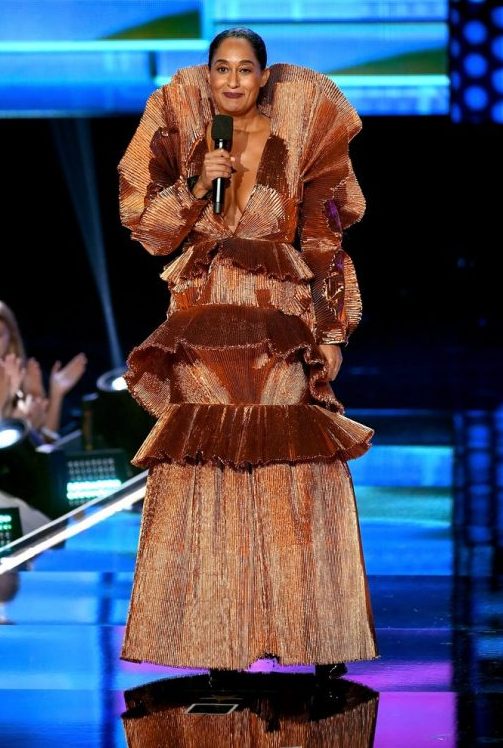 That dress is alive. No really. Particularly between the pudendum and the patellae. Creepy.

Next is singer and talent show judge Nick Cannon wearing, – well, you tell me.

Unless you are a Sikh, no man should wear a pink turban, particularly not with mirrored sunglasses, shorts over black tights, a hanging hankie and hobnailed boots. Even by his own high standards, he looks like a knob. 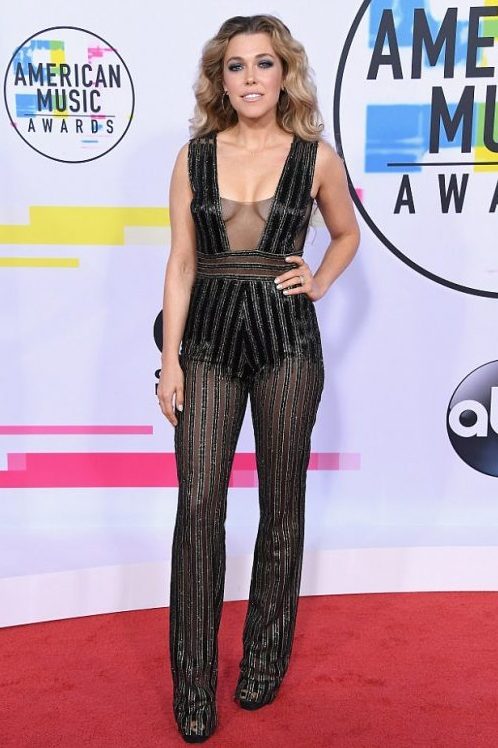 Rachel is wearing sheer trousers, big knickers and a gaping tit window. None of which is acceptable.

Bebe! Why are you modelling yourself on Kim Kardashian?

And Bebe! We do not want to see your arse cheeks, peeping out from behind a gauzy curtain like moonlit ostrich eggs. Please put them away.

It is as if a paint factory threw up all over him. And his trousers have shrunk in the wash. WTF asks again, what has happened to men’s trousers? It is one of the great mysteries of the Age.

You only see Bleona at events such as this, where she turns up with her bits on show like the sparkling fishing net she wore to the AMAs in 2014 or at the Grammys in 2015 dressed as a Cyborg blowing smoke out of her arse. After the 2014 AMAs, her poor parents were so mortified that they barricaded themselves inside their home in Albania and refused to come out. In fact, they are probably still inside, with kind neighbours leaving plates of gjellë, the national dish, on their doorstep. Bleona appears to be earning a living as an Angelina Jolie lookalikey but Angelina would never venture out dressed as a metallic hatcheck girl.

This week’s It’s Got To Go comes from WTF stalwart and aficionado Leslie from Lisson Grove, who is appalled by Black Friday. Over to Leslie. ‘It is a horrible imported piece of nonsense, just a cheap trick to try and part people from their hard earned dosh. And it’s getting worse with many big brands advertising “Black Friday offers must end Monday!!!!!” Anyone with a cockeye can see that the shelves are filled with all their last seasons’ pork and cabbage with anything tasty removed until the silliness has been put to bed…. It really has Got To Go!’

OK Readers, that’s your lot for this week. Please keep those comments coming in as WTF values them like anything. And please keep those excellent suggestions for It’s Got To Go coming.  Let us meet again next Friday. Be good.