Posted on December 9, 2016 by fashionshark

Amongst all the things for which that WTF cannot forgive Michael Gove, which includes just about everything he has done since his balls dropped, his worst offence was during the Brexit debate when he said “people have had enough of experts”. Of course, it is worth remembering that this was in the context of being asked to name any economist who backed Leave. This is because there weren’t any. You can bet your bottom dollar that had there been a queue of learned boffins all explaining why Britain would be a better place once we left Europe, Gove would have given their names, addresses,  telephone numbers and email. Sneering at experience and expertise has now become part of Post-Truth Politics. You do not need to know anything about the subject on which you choose to sound off. In fact, the less you know the better, as long as you shout it loudly enough and threaten all manner of obloquy against those who dare to point out you are wrong. Wrong is the new Right. Ignorance is the new Learning. Knowledge is the new Necromancy.

Post-Brexit, this contempt continues to flourish. Jacob Rees-Mogg, a man so posh, pompous and preposterous that Downton Abbey would have rejected him as a character, appeared on Newnight last month waving away the prediction from the Office for Budgetary Responsibility, a Government office set up precisely to give an independent view of the state of economy, that Brexit would cost Britain the trifling sum of £59bn. Rees-Mogg was having none of it. “Experts, soothsayers, astrologers are all in much the same category”, he scoffed. And this week, the Supreme Court Judges were derided for their ability to interpret constitutional law. Journalists whose own grasp of constitutional law stopped somewhere short of Yes Minister, mocked M’Lords and My Lady for meddling in matters outside their remit whilst idiots on social media, many with the IQ of a root vegetable, dismissed Lord Neuberger and his colleagues as “stupid” and “senile”.  Former Minister Iain Duncan Smith, a man who should know better but either does not know better or does not care that he should, complained that the Supreme Court hearing was “like watching paint dry” as if laugh-a-minute was the essence of complex judicial determination. What the hell do those judges know? They have only practiced in the field of law for four decades and reached the top of their profession. Why would they have a better grasp of the intricacies of The European Communities Act 1972 and the Good Friday Agreement and the deployment of the Royal Prerogative than Andy from Angelsea and Betty from Bradford? Yet when Andy suffers chest pains and Betty starts coughing up blood, will they call upon the local witch doctor or base their diagnosis on what @Charlieboy says on Twitter? No fear. They will be off to the local A&E before you can say 999. Because this expertise malarkey is only offensive when they do not understand what the hell is going on. Or do not want to know.

WTF is not Advocating a return to the age of deference when proles had to doff their cap. But when did we become so dismissive of learning and knowledge? Is this how it is going to be now? Sod the facts. Sod the law. Sod the constitution. Sod learning. Sod experience. Sod precedent. Sod anyone who actually understands what they are talking about. We don’t need them. We are tired of them. And that, Readers, sums up 2016. And bodes very ill for 2017 and beyond… 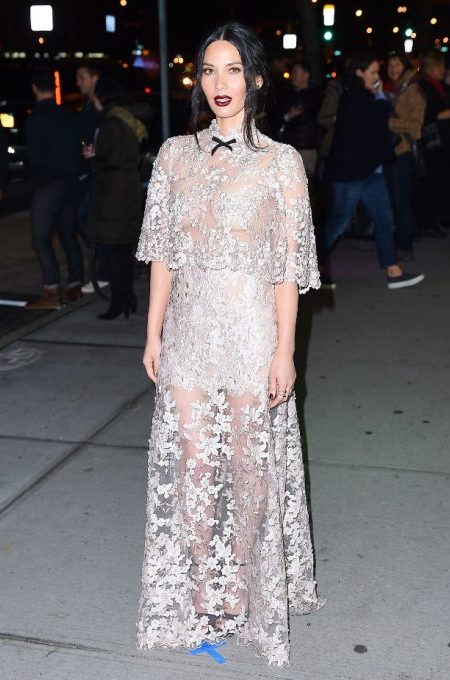 More horror from Reem Acrid. Olivia has been sold a pup and she knows it. You can see her standing there thinking unfriendly thoughts about her stylist. Like “you’re fired”. Had Scarlett O’Hara made her own wedding dress from the lace curtains at Tara but run out of lining fabric and had her undies stolen by malevolent Union soldiers, this is what she would have looked like.

To London and the Capital Radio Jingle Bell Ball where sartorial nastiness was all around. This is singer Anne-Marie Nicholson.

The late, lamented Andy Stewart was famous for a song called Donald, Where’s Your Troosers? He was wearing a kilt, you see. Oh never mind. Anyway, in this case, it is Anne-Marie, Where’s your Bloose? And why are you wearing your bath mat?

Young Roman is the son of Martin Kemp of Spandau Ballet fame. They had a big hit with True. And true it is that this ensemble is perfectly ridiculous. Did he overdo it with the bleach when putting his clothes into the wash? If he did, it failed to eradicate the stains on his knees which look as if he has been kneeling in dogshit.

As if Londoners are not suffering enough at the moment, we then had the Fashion Awards where fashionistas various made a terrible fool of themselves. Like designer Lulu Kennedy. 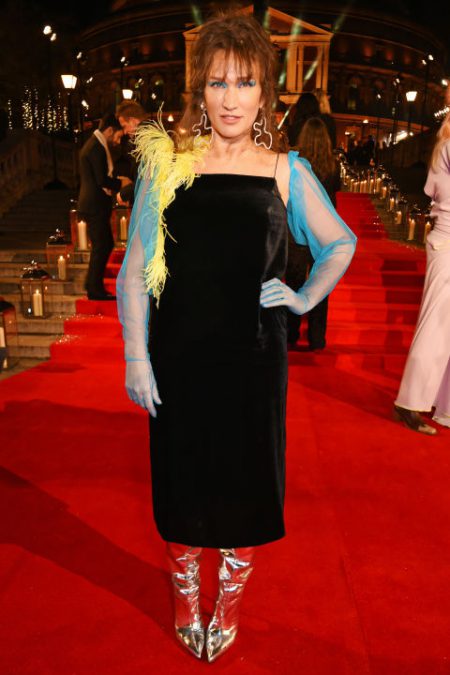 WTF are those things on her arms? Are they sleeves? Are they gloves? Had she been sticking her extremities into a beehive? Why is there a dead bird on her shoulder? And whilst we are on the subject, WTF are those boots? Did she make them herself using those large tinfoil  turkey-size baking trays you buy in supermarkets at Christmas-time?

Here are loads of chaps at the Fashion Awards looking dismal, starting with designer Jean Paul Gaultier, presumably wearing himself.

Jean-Paul has come to the event dressed as a nautical butler in trainers. Who knows why?

Then there were designer Ralph Lauren and his wife Ricky. Both presumably wearing Ralph Lauren. 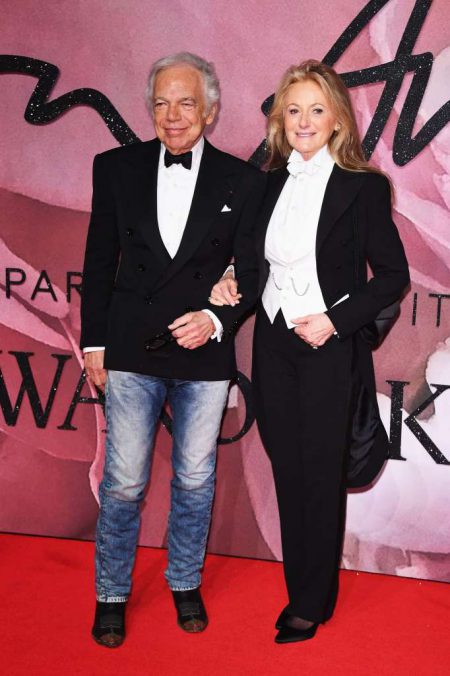 Alessandro has gift-wrapped himself although who will be unlucky enough to receive him, WTF cannot say. His floppy bow-tie seems to be suffering from brewer’s droop. As for Jared, he is clearly in costume for his role as a one-handed Nanki-Poo in The Mikado. a thing of threads and patches indeed…. 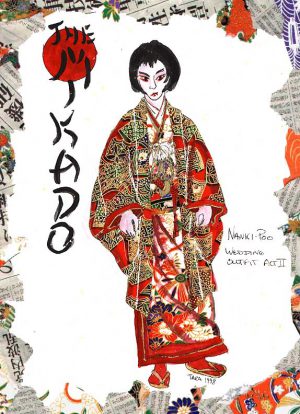 Has Julien been drawing on Nicole with one of those permanent marker pens you use to write your kids’ name on their uniforms? Actually not, these are 115,000 Swarovski crystals, all of which appeared to have died in vain.  The whole thing, not that is a whole anything, is far too gynaecological. As for the belt, it is as much use as tits on a fish.

Finally, we have perennial offender Mariah Carey, seen here with a friend. But it is what we can see of Mariah that is the problem.

WARNING – MAJOR MINGE ALERT!!!  MIND HOW YOU GO WITH THIS ONE!!! 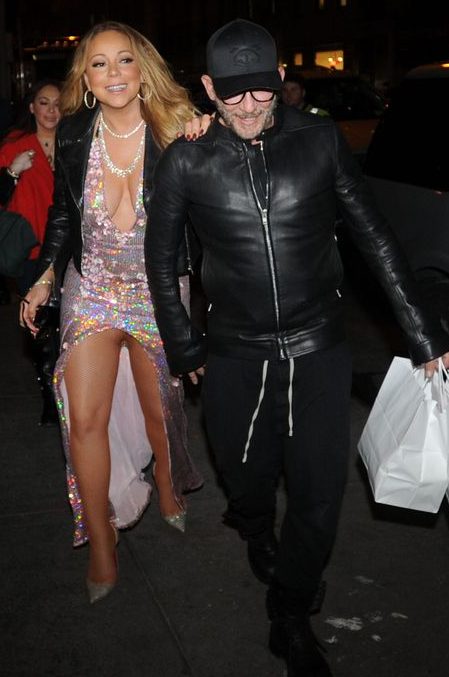 Tits like a spaniel’s ears and a split way past where a split ought to stop, showcasing a nylon-encased nuuny. Either the dress is too small for Mariah or Mariah is too big for it, but either way it should not be worn outside the bedroom and even then only with a prior health warning for whoever it is whose eyeballs are about to be seared to his sockets.

This week’s It’s Got To is from WTF aficionado Lesley Kinney who asks what happened to Nigel Farage’s promised march of 100,000 disgruntled Brexiteers upon the Supreme Court on Monday to protest against judicial interference with The People’s Right To Decide. The hearing took 4 days and apart from a prat dressed as a leprechaun, a few ladies burning the Euro flag and some Remainers on a bus, no-one turned up. It reminded WTF of the film Ruthless People where Danny de Vito actually wants his wife to be murdered by her kidnappers. He withholds the ransom but they don’t kill her. When they phone him again to demand payment, Danny snaps. “I didn’t pay and just today I was at the morgue and she wasn’t there”. Quite. He’s Got To Go.

OK Readers, that’s your lot for this week. There were loads of top comments last week and WTF was skipping about like Skippy in a skipping competition. Keep it up, as well as your excellent suggestions for It’s Got To Go. Let us meet again next Friday. Be good x

8 Responses to WTF Wrong is the New Right Special