As Lady Bracknell nearly said, to fuck up one Budget may be regarded as a misfortune; to fuck up two, looks like carelessness. To fuck up a third is taking the piss. And what a mess George Osborne has made of this budget. The Omnishambles budget of 2012 was roundly derided, with the top rate of tax cut from 50% to 45% whilst freezing personal allowances for pensioners. Last July, Osborne delivered his first Truly Tory Budget and it turned out to be a stinker. At first it looked good – the introduction of the National Living Wage rising to £9 20 an hour by 2020. That is, if you had a job. And if your job guaranteed you work, as opposed to a zero hours contract. But then it turned out that this was all smoke and mirrors. Rather than being better off, 3 million families stood to lose thousands of pounds a year through cuts to working tax credits, a cut which, by the way, Cameron, when campaigning for re-election, promised would not be made. Meanwhile, the inheritance tax threshold rose to £1m. There was uproar. Tory MPs were besieged by outraged constituents. Various backbenchers spoke up bravely in the House. To its credit, the House of Lords told Osborne to shove his Budget where the sun don’t shine and sent it back to the Commons. At which point Osborne found £4bn in his other trousers, you know, the way you do, and the cuts were ignominiously shelved.

This month Osborne tried again, introducing another Budget. The axe was to fall upon the disabled with cuts of up to – yes, you guessed it – £4.4bn. Well the money for those tax cuts and inheritance tax thresholds has to come from somewhere. It is only right and proper that the least privileged in our society should pay for the most privileged. Then a very strange thing happened. Iain Duncan-Smith, Secretary of State for Work and Pensions, suddenly had a fit of the vapours and resigned, citing his opposition to the very cuts that he had assiduously lobbied backbenchers to support only days earlier. This of course is the same IDS who introduced the Bedroom Tax by which those on benefits with a spare bedroom suffer a deduction for the empty room. Even if they need it.

WTF does not intend to waste time on IDS. He is a weasel. He resigned because he hates Osborne, is anti-Europe and wants to campaign for Brexit. The idea that he is appalled by the proposed cuts is risible. But in his favour, his resignation propelled Osborne headfirst into the slurry pit. Within days, the proposed cuts had vanished along with his bid to succeed Cameron. He conceded that the cuts had been a mistake, although he refused to apologise. So now that £4.4bn deficit is back. Better check those other trousers again, poppet.

What is so unutterably offensive is the total arrogance of Cameron and Osborne, these two posh, trust-fund boys, who simply do not, cannot, understand the hardships and deprivations of ordinary people, poor people, disabled people. Yes, Cameron had a disabled son, who sadly died very young, and that was awful. But there was never any danger of Ivan or his parents going without. What this Budget, like the last Budget, and the 2012 Budget, and all the other Budgets, have shown is that the agenda of this Government has been to favour the rich at the expense of the poor. So which group is set to suffer next?

We cheer ourselves up with a dip into the week’s sartorial sluicebucket. Let us start with Michelle Monaghan, wearing Stella McCartney at the premiere of her new movie, The Path.

Why is Michelle dressed as the animal from Maggie and the Ferocious Beast? And those mega-lobe earrings are really not helping. 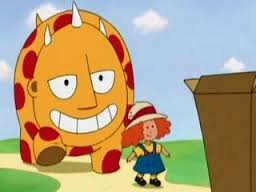 Next, we have actress Melissa McCarthy wearing her own design at the Sydney premiere of her new movie, Boss.

OK let us get this straight. Were Melissa a size 4, WTF would still hate this frightful flowerfest because there is no excuse for going around looking like a two-legged sofa. WTF also has a marked antipathy to invisible feet.

To The Daily Row’s Fashion Los Angeles Awards where nonsense was all around, starting with Lady Gaga wearing St. Laurent. 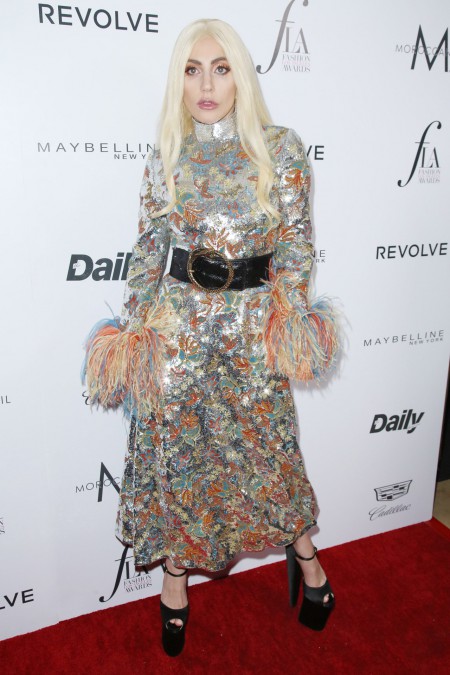 So we had Melissa without feet (although at least she was spared these horrific shoes) and now we have M’Lady without hands. Instead, the hospital prosthetics department has given her a pair of pompoms. Tricky. 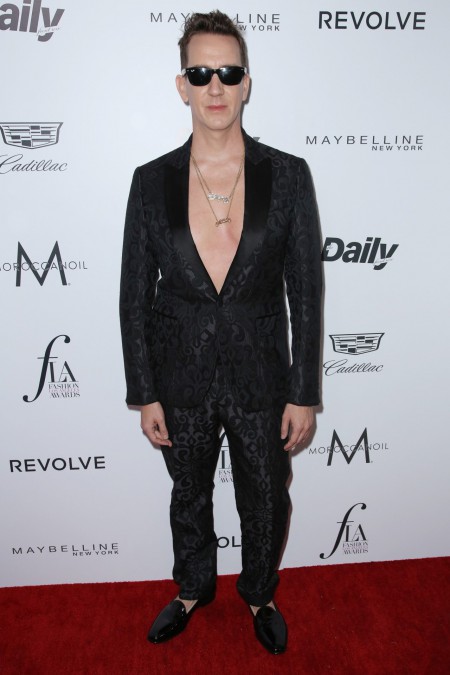 What a pillock! It is about time that we were spared the sight of Jeremy’s over-waxed chest. This suit makes him look awfully stumpy. Wasn’t Stumpy one of the Seven Persons of Restricted Growth?

Also there was model Gigi Hadid wearing Yanina Couture with a La Perla bodysuit. And knickers underneath the bodysuit.

This is sort of Beth Tweddle meets Caspar the Friendly Ghost and it is very, very silly. There are also visible panties below the bodysuit. You never got to see Caspar’s panties, did you?.

To London and BBC presenter Brenda Emmanus. WTF has no idea what she is wearing. None whatsoever…..

This is a very remarkable and ridiculous garment. There is a torso is made of giant Polo mints emerging from a bear’s arse. It is a tribute to her professionalism that she continues to maintain that beaming smile.

Finally, a sight of shocking shockingness. This is Empire actress Ta’Rhonda Jones. It is not what she is wearing that is in issue. It is how much there is on show underneath it….. Take a deep breath now. Your eyeballs are about to pop.

There are many things WTF would like never to have happened. Mosquitos. Baked beans. Donald Trump. And Angelina’s preposterous Oscars’ pose, since when every woman on the Red Carpet has felt the need to stick out her thigh, thin or tubby, at an angle previously achieved only by contortionists and people in bad road accidents. Like Ta’Rhonda here. Worse, however, are the globular tits, as round and shiny as a couple of canteloupes. They defy gravity. Somewhere in Heaven, Sir Isaac Newton is sobbing quietly…

This week’s It’s Got To Go  is in fact He Had to Go. I refer to bigoted old fart, Raymond Moore, 69, a former tennis player and now the organiser of the Indian Wells tennis tournament in California. This week, Moore said of the Women’s Tennis Association, “..in my next life, when I come back, I want to be someone in the WTA because they ride on the coattails of the men….They don’t make any decisions, and they are lucky. They are very, very lucky. If I was a lady player, I’d go down every night on my knees and thank God that Roger Federer and Rafa Nadal were born because they have carried this sport. They really have.” What absolute drivel. Many people prefer the beauty of the women’s game to the wham-bam-thank-you-Ma’am stuff of the men’s game. Serena Williams riding on a man’s coattails? I think not. He Had  To Go.

OK Readers, that’s your lot for this week. Keep those comments rolling in. There were sparse last week and you know how WTF frets when that happens. And don’t forget your top suggestions for It’s Got To Go. There won’t be a blog next week as WTF will be out and about. But she will be back with a vengeance on 5 April. Be good x