Posted on September 13, 2013 by fashionshark

Those of you who follow @WTF_EEK in Twitter (look, we have had this discussion before – this is the 21st century. Get on with it. Just saying…) will know that last weekend, WTF went to Copenhagen for the weekend and it proved to be very agreeable. The weather was lovely, the people charming and the City delightful.  WTF visited the Tivoli Gardens on Saturday night, lured in by the twinkling lights which transform the place into a magical fairy kingdom, only to find a rap competition going on in which a number of pink and white Danes in hoodies yelled incomprehensibly into the microphone.  Although she fancies herself as a Danish speaker after being glued devotedly to The Killing and Borgen, WTF’s mastery of the language is limited to “tak” (thank you), “ja” (yes),“hej” (hallo) and Statsminister (Prime Minister) but there were two words frequently deployed  by finalists DJ Music and MC Ollie which she did understand – “fuck” and “motherfucker”. It was as if Hans Christian Anderson had turned into Ray Winstone. Britain has given the word “fuck” to the world, the Americans used it to coin “motherfucker” and now our cultural heritage has spread itself across the globe. WTF was a proud woman, I can tell you….

WTF was struck by the timing of her somewhat surreal Tivoli experience given the spat between David Cameron and the Russian Foreign Office whose unnamed official was said to have described us as “just a small island” to which “no one pays any attention”. Call Me Dave was obviously inspired by Mr Prime Minister Hugh Grant in Love Actually in that scene when he gave US President Billy Bob Thornton a bollocking and waxed lyrical about David Beckham and Harry Potter after Billy had snogged the tea lady. Similarly, Call Me Dave sprang to the defence of this sceptred isle, this earth of majesty, this throne of Mars. His voice quavering with emotion, Call Me Dave extolled our unique virtues, our combatting of fascism, our invention of various sports, our responsibility for “art, literature and music that delights the entire world” not to mention “our literature, our art, our philosophy, our contribution, including of course the world’s language”.…. He probably had DJ Music and MC Ollie right in mind. Whether they have actually heard of him is another matter.

The contrast between the Danes and the Brits is striking. Denmark is a small country and it does not pretend to be anything else. It does not strut itself upon the world’s stage. It does not demand automatic respect and it does not trade upon past glories. As she strolled around Copenhagen WTF reflected that it must be restful not to have to keep up a lifestyle when you can’t afford the bills. Britain is a bit like Lord Grantham struggling to pay the mortgage on Downton Abbey and having to flog off the family silver, rather as Call Me Dave is now busy selling off Royal Mail to citizens and giving shares to employees when both groups thought that they already owned it. After all, we have spent enough public money shoring it up and making it profitable and last year it turned an operating profit of £440,000,000. But hey, we need the money….we have a war to conduct and we were not far off getting sucked into another one.

In the meantime, Putin seems to be playing a blinder in stopping the invasion of Syria (never mind that Russia has been propping up its regime for decades),   Call Me Dave had to tell his mate Obama that Britain was busy washing its hair and couldn’t send its bombers and our Mail Services will be run by Heaven knows who, probably with the same degree of success as our banks, our utilities and our airports. But never mind. We can all console ourselves with the thought that we have left the world richer than we found it. Motherfucker!!!!!! Ja!!!!!!!

Let us turn to the fashion disasters of the week, kicking off with a double helping of horror from the TV Choice Awards, an event where orange nobodies congregate to hand out prizes to each other for being orange. First we have Coronation Street star Brooke Vincent in what appears to be a scarlet valance from Manchester couturiers The Dolls House.

The bag firmly clamped to her crotch leads WTF to believe that there may be some serious camel toe lurking under there….meanwhile, should you want your eyeballs to stand out on stalks, check out the Dolls House website where a cornucopia of horribleness awaits you.

And then we have veteran actress Jenny Agutter. 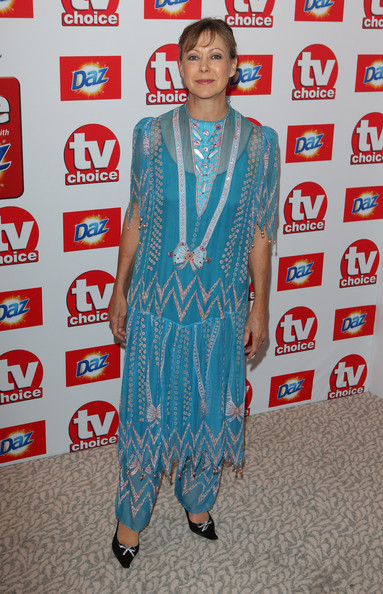 WTF is struggling to imagine how this could have been any more terrible. The whole thing is positively baffling, particularly the faux butterfly-necklace and the profusion of stupid little baubles whilst the drop-waist tunic makes her legs seem shorter than Toulouse Lautrec’s. She looks like a concubine at the Court of Nebuchadnezzar. And those shoes!!!

Tuesday saw the 25th birthday party of the DKNY line and amongst those present was gorgeous Supermodel Joan Smalls wearing the eponymous label. 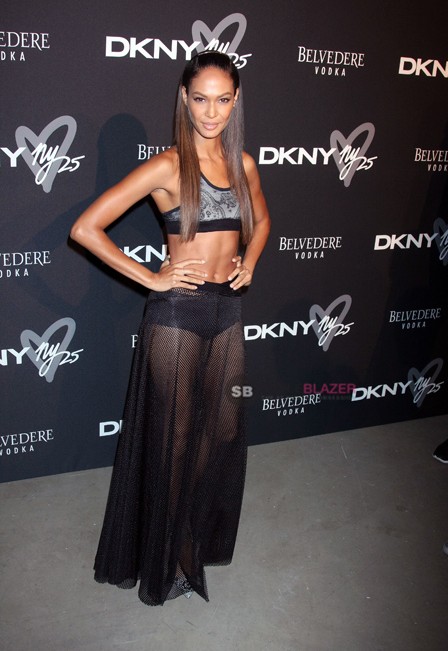 It may be DKNY and Joan’s abs may be a thing of wonder but the fact is that this is a sports bra and big pants with a droopy net skirt. The logo behind her makes her look like a Playboy Bunny. Nice to see women’s liberation alive and well in the 21st century…

Now we have singer Pharrell Williams wearing, amongst other things, a Junya Watanabe coat.

One would be forgiven for thinking that an emergency caused Pharrell to abandon home whereupon he grabbed whatever clothing first came to hand. There is the Pied Piper coat, the spotty asymmetric  waistcoat, the shirt designed for someone much taller worn over manky shorts and the hideous snakeskin espadrilles. Nothing goes with anything else and every item sucks. Except the hat.

To Munich and actress Diane Kruger wearing Jill Stuart for the premiere of the US TV version The Bridge.

WTF is unsure what is more galling – the dress, the $1200 Charlotte Olympia handbag (for that money one would expect the clock to work but it is a fake) or the fact there is an anglicised remake of the brilliant Swedish/Danish crime drama. Heaven forfend that Americans could actually watch something with subtitles. As for the dress, mock-braces over tits are never good and over lacy tits they are worse. Even Diane looks unimpressed.

It is New York Fashion Week and Victoria Beckham was photographed everywhere in her own creations, including this one. 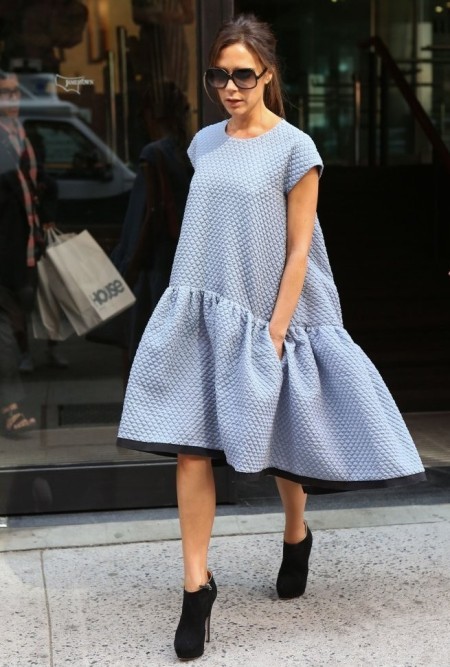 Mrs Beckham is the size of a twiglet and nibbles only on edamame, raw fish and frozen strawberries, so it is a surprise to learn that this massive tent, big enough to house the entire Beckham family, is the favourite of her designs this season. As WTF aficionado Alison remarked, no-one looks good in Mama Cass couture, especially when it is made out of the stuff used to protect mattresses from the incontinent. 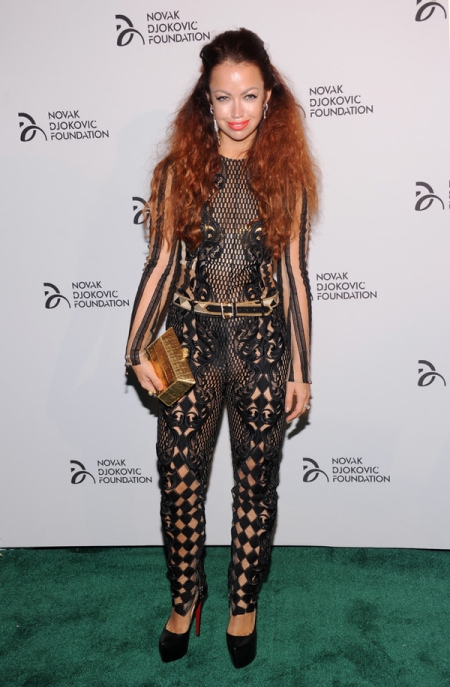 Before last weekend, WTF’s previous experience of Danish music had been limited to Nina and Frederick but first came the Tivoli Gardens rapperfest and now her sighting of Aura whose ensemble makes her look like a bedraggled monochrome Harlequin after a fight with a Doberman.

Bad as Aura is, the booby prize (in more ways than one) goes to another Supermodel, our own Ms Angry-as-Hell Naomi Campbell at the same event wearing vintage Gianni Versace.

Even at 43, Naomi still has the most fantastic body, made even better by the fact that she is not and never was a stick insect, but even she cannot get away with portcullis tits like the Madame of a Streatham S&M house. It is so vulgar that it would have to be Versace wouldn’t it? And how appropriate for an event raising funds for educating children….

OK Readers, that’s your lot for this week. You have been sparse with the comments recently and WTF is sensitive and worries that you don’t love her any more. Have a good week and we shall meet again next Friday xx