In which Givenchy has a shocker Special

As tuneful pop combo Keane sang, Everybody’s Changing. First the Pope hung up his vestments and quit the Vatican. Then Queen Beatrix hung up her Crown and quit the Royal Palace. Now Sir Alex Ferguson has hung up his hairdryer and quit Manchester Utd. WTF cannot stand the old bugger but he knows his business and you cannot but be awed at his achievements. WTF will even miss him, particularly as his replacement is dour, goggle-eyed Steve Buscemi look-a-likey David Moyes, a man who makes Sir Alex look like the Laughing Policeman.

So who will be next to bow out of the limelight?  At least the people I have mentioned have retired because they are getting on a bit. Two actors off Coronation Street have been arrested in separate incidents for alleged sex offences and are currently off the screen. WTF makes it clear that these are unproven allegations but as Lady Bracknell almost said, to lose one cast member may be regarded as a misfortune. To lose two looks like carelessness. If the police carry on working through Actors’ Equity like this, forcing the scriptwriters to send characters off to look after sick relatives or take a trip to Florida or whatever, the programme could end up as a two hander.

And then this week presaged another potential change – the Queen attended the State Opening of Parliament accompanied by Charles and Camilla and also announced that she is skipping the next Commonwealth Conference and is sending them along instead. Is she planning a job share or should she abdicate? There was a tangible degree of love and affection between Beatrix and Prince Willem-Alexander and he even held his mother’s hand on the Palace balcony, something you would never see with HMQ and Charlie. You certainly see it with Charles and his own sons but whereas Beatrix was happy for her son to become King of the Oranges, you sense that Charles gives HMQ the pip. You also sense that his future subjects want to miss him out altogether and get straight on to William and Kate. Many view Charles, for all his qualities, as an anachronism what with his huge retinue of staff, his penchant for full dress uniforms and chestful of medals (contrast the wonderful old boys who pitched up this week marking the Battle of the Atlantic and the Arctic Convoys – now they earned their medals), his often sulky demeanour and his general air of having wandered in off the set of Downton Abbey. I mean look at him…

Would Britain would be happy to be ruled by someone who can squeeze another man’s wife but gets his valet to squeeze his toothpaste?  And there is the matter of his preferring Camilla to the fragant, if bonkers, Diana and his famously comparing himself to his mistress’ tampon.  It is hardly Charles’ fault if he isn’t William but he is, ironically, a victim of his own success in the way he lovingly brought his sons up. Meanwhile, if Charles is looking for something to do, there may be a couple of locum jobs going in Corrie….

One thing that does not change is the Met Ball, held every May  at the Metropolitan Museum in New York. Every year the clothes are ghastly and this year they were as ghastly as ever. The theme was supposed to be Punk and so it was tricky working out who looked crap because they had read the invitation and who just looked crap. WTF has done her best here but believe me, there were so many contenders for inclusion this week that had she featured them all, Charles would have assumed the Throne by the time you had finished reading….. 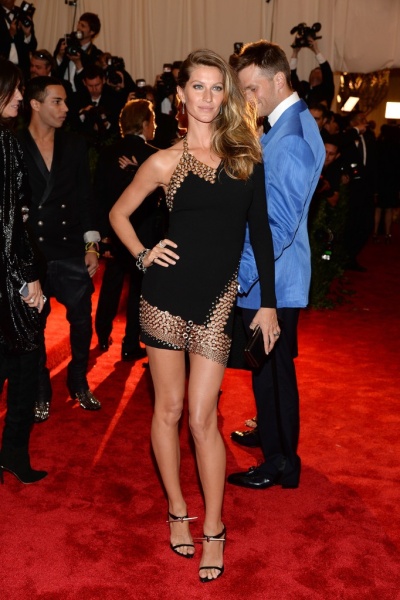 WTF would rather spend an evening cuddling up to Sir Alex Ferguson than say anything nice about Vaccarello who is incapable of designing a dress without putting onlookers in fear of an imminent minge moment. Last year, it was Anja Rubik whose white dress was slit in places where slits should not be and this year it is Gisele with chainmail barely covering her unmentionables. Vulgar. And then some.

No wonder Kristen Stewart is looking so miserable in this horrible onesie by Stella McCartney.

Stella is a great fan of the onesie but WTF does not share her enthusiasm and even if she did, which she doesn’t, this lacy babygro is repulsive by any standards. It positively billows around the crotch like a bloodsoaked sail and simultaneously seems to cut her from stem to stern as if the victim of some demented Samurai swordsman. She looks awful. And she knows it.

Now if anyone knows about Punk it is Dame Viv, but this dress is hideous. WTF could forgive the fact that it is made entirely out of rubber and even its light over-skirt over a black under-skirt but it is as slithery and slippery as a used condom and it is giving WTF the creeps.

How do I hate this? Let me count the ways…. See-through. Peek-a-boo. Dog ugly (sorry, dog owners). It looks like Morticia Adams’ cast-off. There is a lot going on, and none of it good. 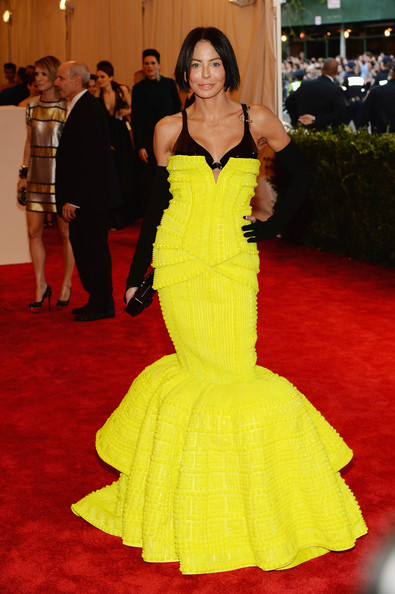 Lisa grew up dirt poor in Spanish Harlem but at 15, she was spotted in the street by a minion from Wihelmina and became a model. She married husband Philip before he was rich and now he is a billionaire and they live in a $50m mansion off Fifth Avenue  with 27 bedrooms. Lisa Marie probably needs most of them for her wardrobe, including this vomit-coloured dress, a cross between a rocket and a banana, held together with rivets and worn with a black plastic bra. Lisa Marie had a hand in the design and so only has herself to blame. And clock the missing finger on her gloves…

And now we come to a cornucopia of awfulness by Givenchy designer Ricardo Tisci. As Sir Alex would say, the boy has had a shocker…..

When WTF first saw this picture of Madonna, she was inclined to let it go as costume and was severely upbraided by WTF aficionado Jawad Ali as a result.

However WTF learned that Madge had not assembled this outfit from Lourdes’ rummage basket but from Givenchy and changed her mind. Jawad – you were right. It is of course no good railing against the fact that Madonna’s arse is hanging out, because, to be frank, when is it ever in? But the whole combo, worn for some reason with fuschia suede pumps and a wig last seen on Elizabeth Taylor in Cleopatra is certifiably bonkers.

On we go to serial offender Kim Kardashian.

If you are heavily pregnant you should avoid wearing acres of floral furnishing fabric, both because it makes you look like a runaway sofa and because it gives everyone else a headache. Worse still are the gloves or sleeves ending in gloves or whatever the hell is going on at the end of her arms. What is it with all these gloves? Are they all planning a spot of burglary afterwards? Ricardo tried to defend this outfit but even the dream team of Perry Mason, Professor Alan Dershowitz and Socrates would fail to get an acquittal on this one. Ricardo, you are guilty of crimes against the eyeballs.  The final insult was delivered by Robin Williams who pointed out that he wore something very similar in Mrs Doubtfire and looked much better in it.

Things do not improve. Here is French fashion maven Carine Roitfeld wearing  a Bambi sweatshirt from the Givenchy 2013 Fall collection and a sheer polkadot skirt.

Finally, making it a triumphant two Met Ball Specials in a row, here is Beyoncé. 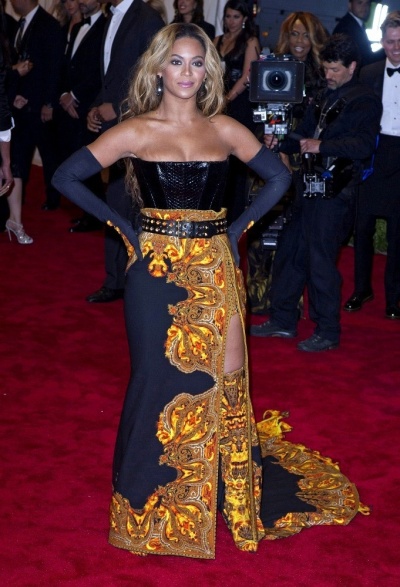 It looks like bad Versace but it is bad Givenchy. WIF has no idea why Beyoncé, who is both beautiful and talented, decided to wear a leather boob tube, gloves, the backdrop for an amateur production of Stravinsky’s Firebird and matching boots, but she looks entirely ridiculous. Frankly she would have done better with something out of Lourdes’ rummage basket…..

OK Readers, that’s your lot for this week. You were a touch quiet during the week but maybe you were off on your holidays. BUT YOU ARE BACK NOW. GET ON WITH THE READING AND THE COMMENTING. Let us meet again next Friday. x

10 Responses to In which Givenchy has a shocker Special