Boris Johnson, still recovering from his bout with Covid-19, has became a father again (we think this is number six).  But he cannot hide forever behind either his illness or his new baby. The death rate in the UK is 27,000 and rising. The NHS is woefully ill-equipped with staff donning bin bags and re-using masks – a result, we now discover, of an abject failure to secure the proper Personal Protective Equipment. It also turns out that the Government downgraded the categorisation of the virus to avoid meeting the appropriate requirements for PPE, rather than upgrading the amount of PPE to keep staff and patients safe when the virus hit. All this despite a pandemic training exercise in 2016 which concluded that if the real thing were to happen, the UK would struggle due to a lack of equipment.

On Monday, BBC’s Panorama highlighted these matters, featuring a number of NHS staff who go to work without proper protection, terrified for their lives, and forced to watch their colleagues and their patients dying. Whereupon Tory MPs and newspapers, who should be holding this wretched, woeful, shit-show of a Government to account, attacked Panorama instead because of the politics of the doctors and nurses interviewed in it. One had stood as a Labour MP. Another was the daughter of musician Brian Eno and a member of a group that opposes charging migrants for medical treatment. A third was a friend of former Labour MP Frank Field, and had called Jacob Rees-Mogg  ‘a pompous fool’. A nurse had been seen on Instagram wearing a Jeremy Corbyn badge. Never mind what they were saying – they were ‘Trots’.  Then Lord Sugar attacked the media, including Piers Morgan (who has undergone an amazing transformation from celebrity lickspittle to a forensic interviewer shredding arrogant Ministers into pieces small-enough for a wok stir-fry), for asking difficult questions rather than supportive ones. And the new Tory MP for Stoke-on-Trent North, political pygmy Jonathan Gullis, attacked  the media for having ‘a sick obsession’ with the death rate, a tweet he was forced to delete and grovel over about ten minutes later.

To which WTF says as follows. Of course the media should be highlighting the fact that there are shortages of equipment where there should not have been stockpiles, and that figures are being fiddled (counting one glove as one piece of equipment, for example).  Of course the media should be raising hell about the fact that old people are dying in care homes, and those looking after them on very low wages have no PPE. Of course every single person in this country should be concerned at the horrifically high death rate, and what, if any, exit plan, there may be to emerge from this nightmare. Of course NHS Staff should be speaking out about this. And just because our Prime Minister caught the virus and has fathered yet another child, does not make him or his under-prepared minions, exempt from criticism. How dare journalists,   politicians and TV personalities,  all safely tucked away at home, attack workers on the front line, and lash out at those who expose the dangers to which these heroic people are exposed?  Stop telling us how wonderful the NHS is and start protecting both the people in it and the people treated by it.

We need cheering up. This week’s retrospective of fashion fiascos features rapper Cardi B, whose clothing choices have stunned regular readers of this blog for a number of years. Cardi is a former stripper with seriously augmented bosoms, which she splendidly explained away as follows: ‘I can’t swim so I bought these titties so I can float.’ With these things she could have survived the sinking of the Titanic without a lifeboat.

We start in January 2016 at New York Fashion Week, where we find Cardi wearing Laquan Smith. 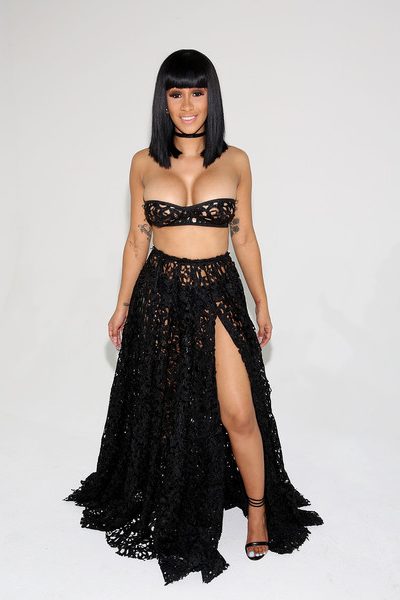 This might have looked pretty around the hotel pool at the Beverley Hills Hotel, but WTF feels confident in saying that the top was a trifle small, a veritable sprat to catch a mackerel.

We move on to August 2017, where Cardi attended the promotion for the Floyd Mayweather fight against Conor McGregor. 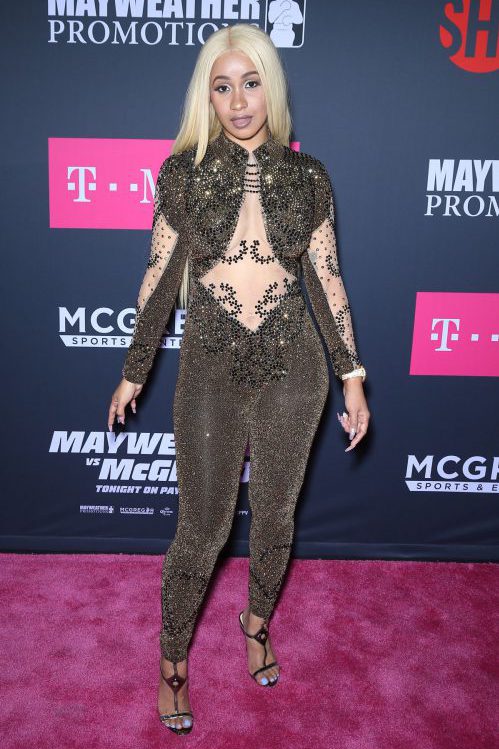 This could very well be the very ugliest thing that WTF has ever seen, like a peekaboo Yogi bear outfit. And WTF still takes particular exception to the encrusted minge.

We move to October 2017 and the BET Hip Hop Awards in Miami, with Cardi wearing Lauren DeWitt. 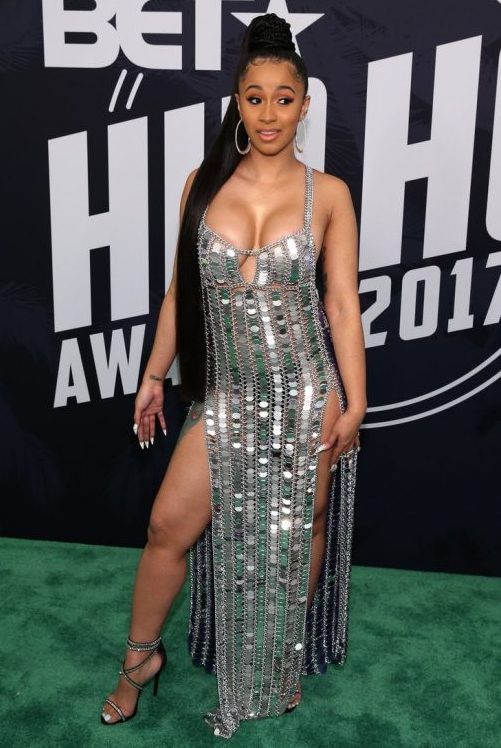 This was more of a case of Lauren Half-Witt. Not only was this the very textbook definition of what WTF aficionado Anna brilliantly labelled ‘genitalia curtains’, but it also made Cardi look like an exploding glitter ball. 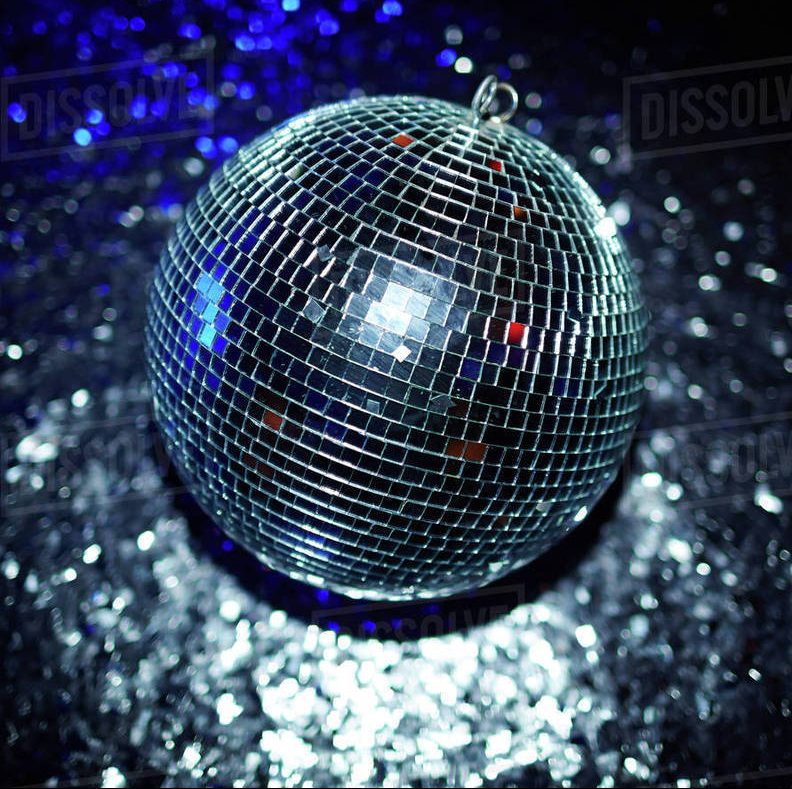 We move to October 2018 where Cardi attended the Power 105.1’s Powerhouse event in New York City. No one owned up to designing this outfit. Good call. 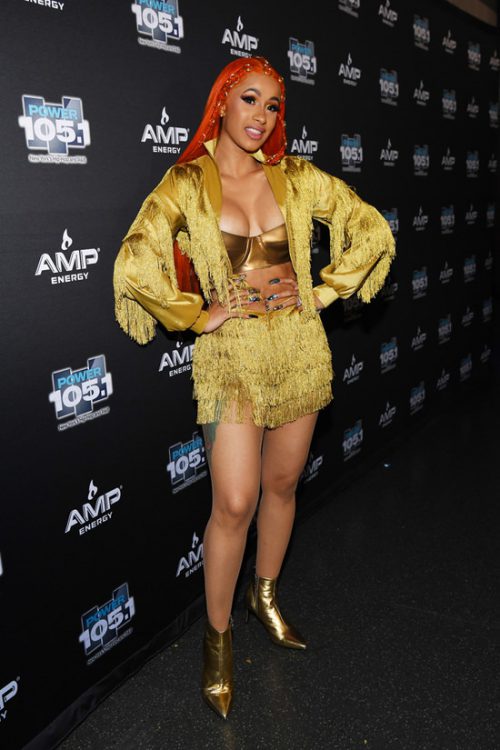 If the Cowardly Lion from The Wizard of Oz went to a fancy dress party as Cardi B, this is what he would look like. 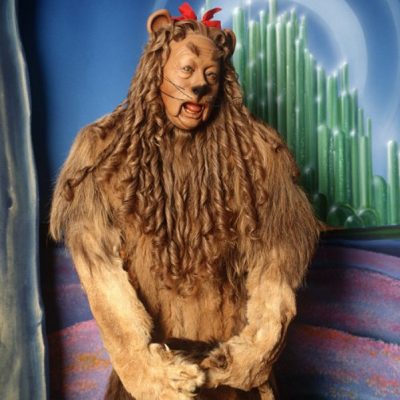 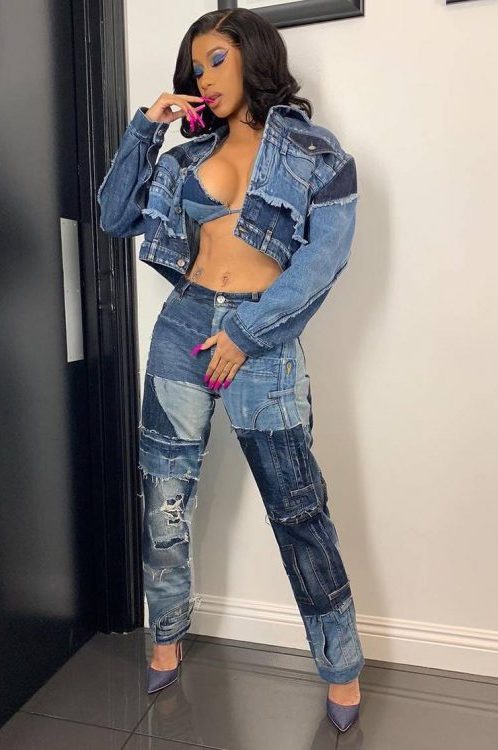 Standing with your hand over your minge is always a good indication that something is awry.  It is best to leave it to Cardi B to explain what was occurring. ‘… these pants is too mother–king tight.  S–t was giving my p—y a wedgie. I hate having p—y wedgies, bro. My p—y be screaming at me like, ‘Bitch! You got me f–ked up! You want a yeast infection, bitch? You want a f–king yeast infection?’”  She may not have wanted one, but wearing this was hardly conducive to her not getting one. Cardi would have been better off either taking a size up or, better still, leaving this foul outfit on the hanger.

The following month, Cardi was at the Grammys wearing vintage Jean-Paul Gauthier. 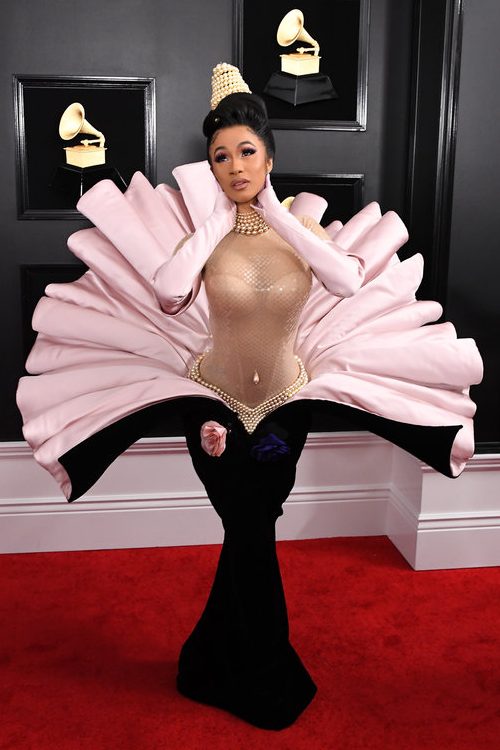 You had to admire the artistry in this creation, but the whole thing was very reminiscent of Botticelli’s Birth of Venus. In that painting, Venus covered her minge with her tumbling locks. Cardi B and Jean-Paul decided to use lines of pearls instead. And the jewel emerging from her tummy-button looked like the results of botched surgery. 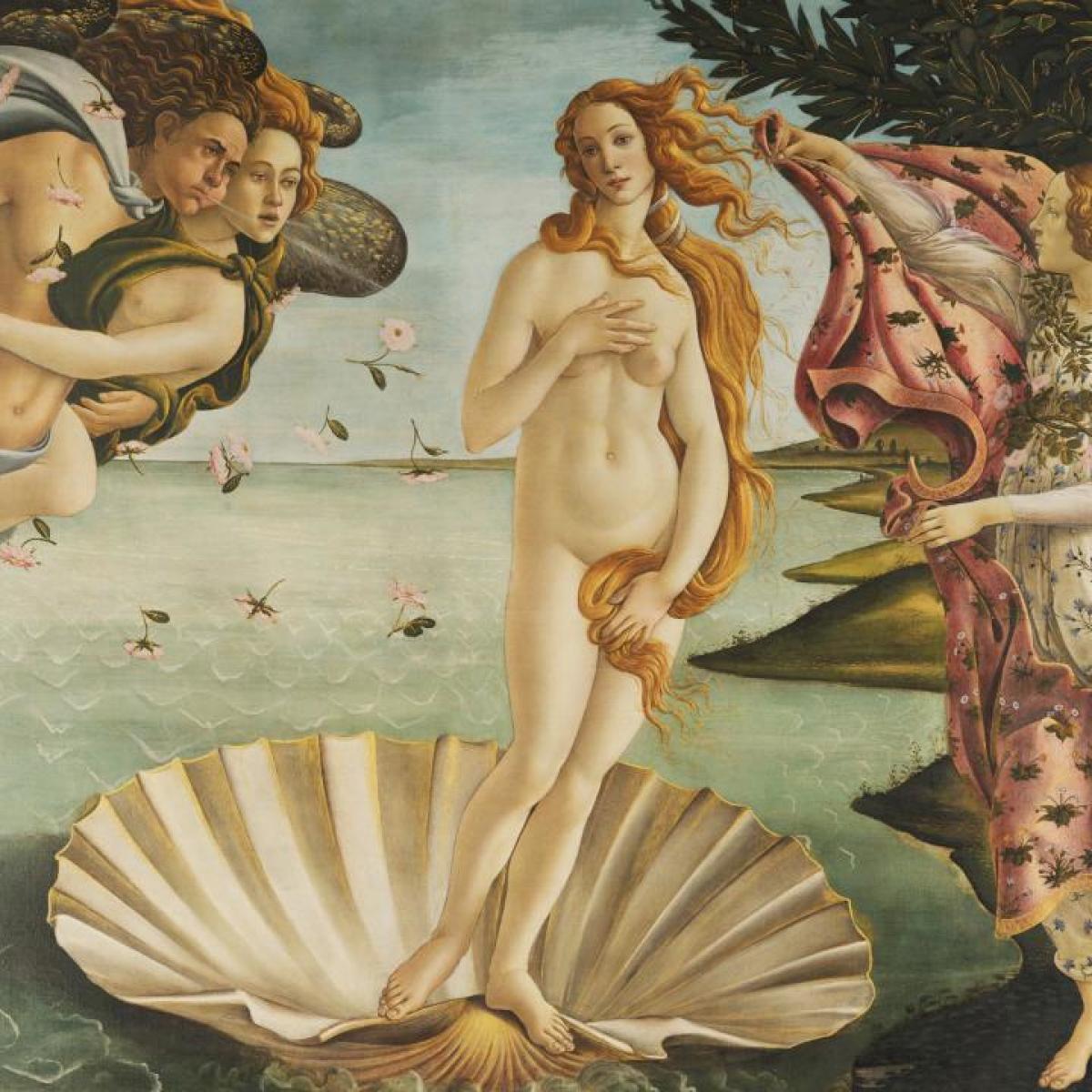 Here is Cardi in June 2019 at the BET Awards, wearing Nicholas Jebran. 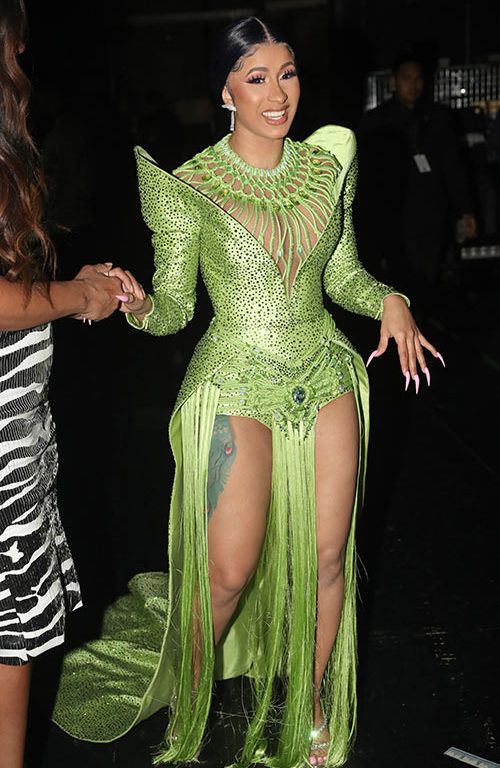 Not so much genitalia curtains as a minge waterfall. Normally it is the prince who turns into a frog, but in a push for sex equality, this time it was the princess. 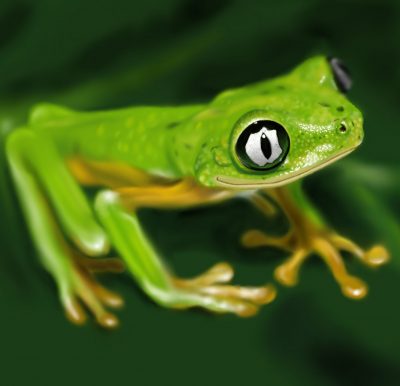 Here we are at Paris Fashion Week in September 2019, with Cardi wearing Richard Quinn. 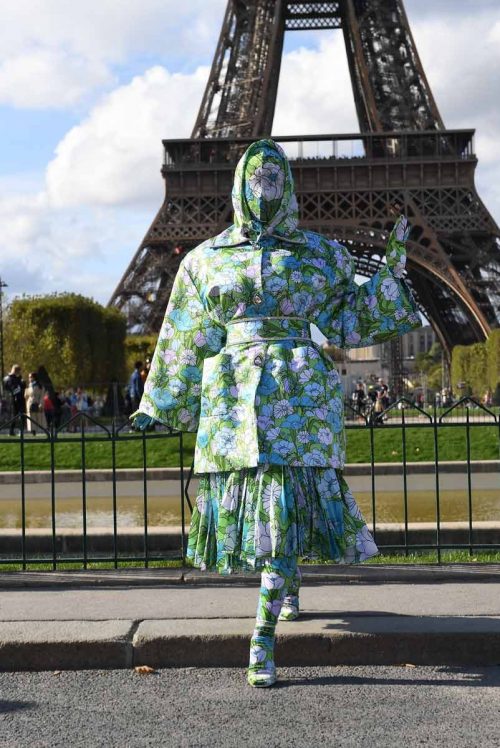 At the time, the face mask looked ridiculous.  But Cardi B clearly had a better understanding of pandemics than most political leaders…

In October 2019, Cardi went out and about in New York City wearing Sally La Pointe. 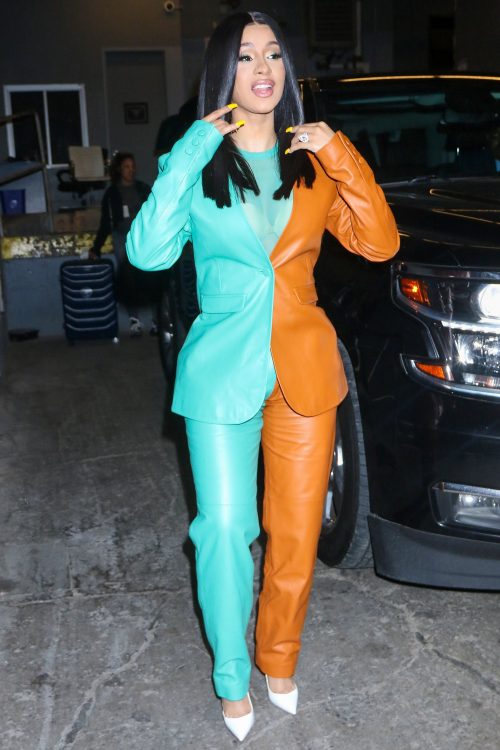 It was hideous, a leather tribute to Batman villain Two-Face. 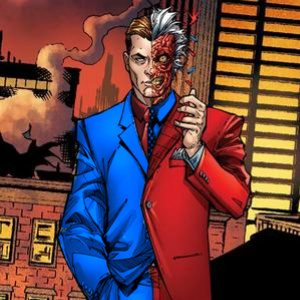 And finally, we arrive at the Grammys in January 2020 with Cardi and her spouse, rapper Offset. She was again wearing Nicholas Jebran. 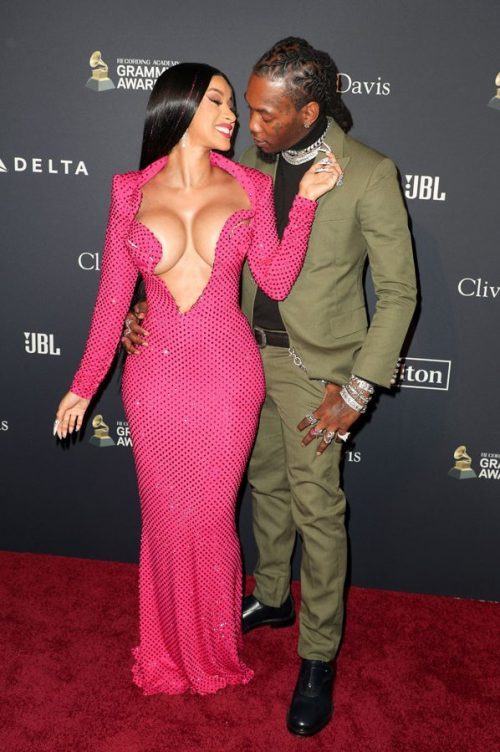 WTF does not have the faintest idea how this dress stayed on, but she does know that Jessica Rabit is alive and well and living in Cardi B. 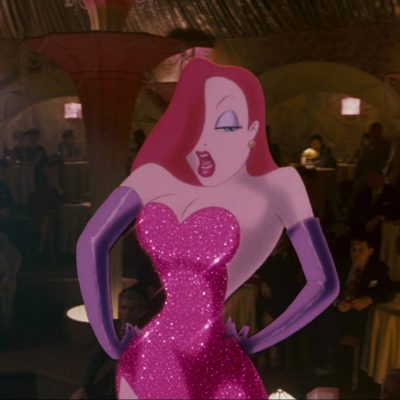 This week’s It’s Got To Go comes from WTF aficionado and stalwart Yvonne from Jedburgh who was in shock, and then some, on seeing this Donald Trump sandwich. 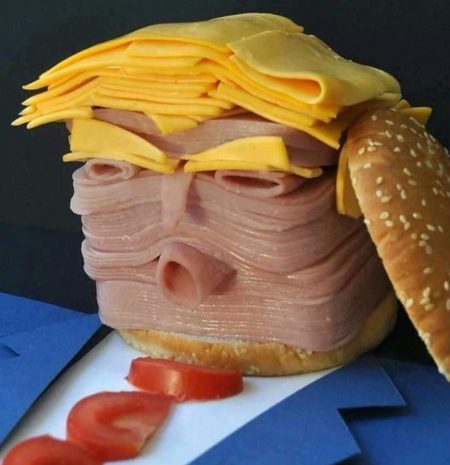 Yvonne is in doubt that ‘this sandwich has got to go, before it even takes off as an idea by Donald Trump and his fans’. When she tweeted it, fellow tweeter Maiella replied ‘And it’s so… moist. One for the “just because you can, doesn’t mean you should” pile’. Yvonne and Maiella are both correct. It’s Got To Go.

OK Readers, that’s your lot for this week. Keep those comments rolling in and your nominations both for It’s Got To Go and for celebrities meriting a fashion retrospective. Let us meet again next Friday. Be good, STAY INDOORS AND AND WASH YOUR HANDS x

Aside | This entry was posted in Uncategorized and tagged Boris Johnson, Cardi B, Jonathan Gullis, Lord Sugar, Offset, Piers Morgan. Bookmark the permalink.