Luton’s answer to Nelson Mandela, Stephen Yaxley-Lennon, or, to use his nom de brutalité, Tommy Robinson, is a racist thug with more than a passing acquaintance with the inside of Her Majesty’s Prisons, having been variously banged up for assault, financial and immigration fraud, public order offences and, most recently, contempt of court. His criminal record is longer than the queue for the loos at Wimbledon’s Centre Court, and you could be forgiven for thinking that Robinson’s principal contribution to the justice system was in providing m’Learned Friends with frequent opportunities to top up their bank accounts. But to many, he is now seen as a fighter for freedom of speech and a victim of State oppression. Except of course that he is isn’t.

Last year Robinson was already on a suspended sentence for contempt of court, namely giving details about the ongoing trials of alleged paedophile gangs in defiance of a court reporting order prohibiting identification of the defendants or mention of their offences until the end of the trial, because there were other ongoing trials. And then, whoops, he did it again, this time in Leeds, where a gang of paedophiles from Huddersfield were on trial, again subject to reporting restrictions. Why did Robinson act in this way? Because these were gangs of Asian men of Pakistani heritage, and they were Muslim. The rationale of Robinson’s behaviour was that the British public needed to know that these trials were going on because they had been “hushed up” and the police were failing to act. Despite the fact that the police had indeed arrested the men, the crown Prosecution Service  had put them on trial, the trials being heard inside the very buildings Robinson was cavorting outside in his self-appointed role as a ‘citizen-journalist’.  Even people charged with disgusting crimes are entitled to a fair trial, and indeed they could walk free without one if there was a substantial risk of  justice being seriously prejudiced, thereby stopping the very thing that Robinson claimed he wanted, i.e. justice for the victims.

Robinson went to prison, was freed on appeal because of questions about the fairness of his trial, and was retried last week, whereupon he was again found guilty. Yesterday he did the Long Walk of Non Freedom back to prison for nine months, although he has already served most of that time. At which point the neanderthals who espouse his noble causes of stopping Brexit hating Muslims, and let’s-get-back-to-the-halcyon-(white, Christian)-days-of-1964, ran amok in Parliament Square, demonstrating their commitment to the rule of law and freedom of speech by attacking journalists, causing criminal damage, and breaking up anti-Brexit protests. Because nothing says law and order more than a group of fat, tattooed, yobs smashing things up whilst calling for Robinson’s release. Meanwhile, morons on both sides of the Atlantic claimed that the Luton Mandela had been denied a fair trial (he hadn’t), had been incarcerated while the paedos went free (they didn’t), is the victim of a Government conspiracy to get him killed in prison (he isn’t), had been punished for doing something the mainstream media do every day (they don’t) and had been denied a jury trial (which he had, but only because contempt trials are always tried without juries).

The great irony is that before his current incarceration, our hero had begged Donald Trump to grant him political asylum. That is the same Trump who was sued for raping a 13-year-old-girl (her case was later dropped), who said that if his daughter were not his daughter, he would be dating her, and who, in 2002, praised his billionaire pal Jeffrey Epstein for being a fun guy who loved beautiful women and who liked them young. The same Trump whose Secretary of Labour, Alex Acosta, had cut Epstein a plea deal in Florida in 2008, which allowed him to serve a year in prison but spending twelve hours every day in his office, despite many young girls claiming Epstein had raped and assaulted them. And now Epstein has been charged with more of the same, this time in New York. Are the MAGA morons throwing up their hands, loudly demanding that Acosta be dismissed and that Trump answer for his  previous friendship with Epstein? Of course not. It is only Muslim alleged paedophiles they care about.

We being our survey of the week’s sartorial slurry singer Halsey wearing an Alyx Studio dress over a Bebe Agiurre bikini. 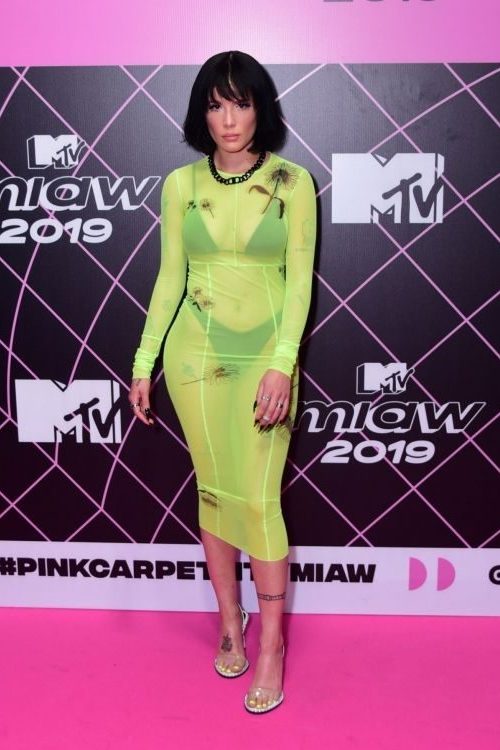 If an anaemic frog went to a fancy dress party as a Love Island contestant, this is what it would look like.

Next up, we have actor Jason Mamoa with his wife actress Lisa Bonet. 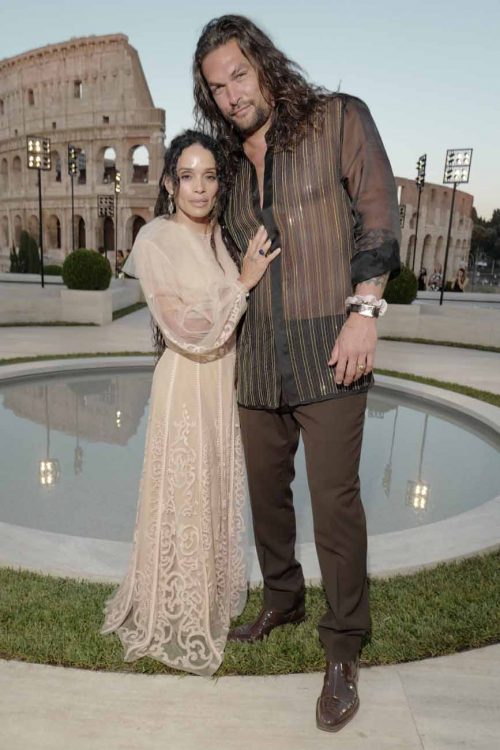 Lisa looks ethereal. As for her spouse, Jason sprang to fame as Khal Drogo in Game of Thrones and his nipple-baring shirt appears to have been inspired by his, er, nipple-baring, non-shirt in that series. 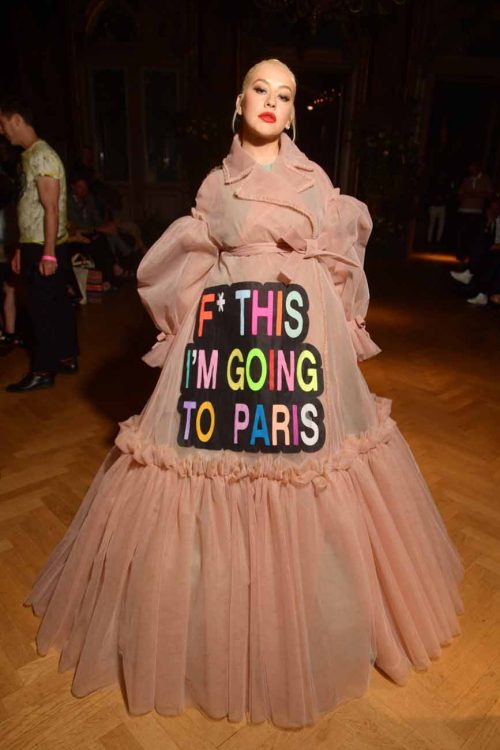 WTF rather admires this in a perverse sort of way as it has a certain insouciance. But it still looks like an old curtain with swearing on it.

And this is actress Araya A Hargate wearing Christian Dior. This one was held over from last week but it bears examination, so here it is.

Everything between the neck and the waist is excellent. But the ‘Allo ‘Allo hat is ridiculous, and as for the skirt, the last time WTF saw something like that it was wrapped around a couple of apples.

Away from Paris, we find former wrestler and now hardman actor Dave Bautista, wearing a most ill-advised ensemble.

Now admittedly Dave is what our Australian friends call a big unit, and so any attire is going to be a challenge, like wrapping a bag of butcher’s brawn in a Saville Row suit. But no one should ever wear a v-necked teeshirt under a suit jacket, especially a double-breasted jacket several sizes too small, and showcasing muscles like  melons.

This is model and actress Sririta Jensen wearing Elie Saab.

If only the skirt were actually a skirt, you know, in the sense that it encompassed her whole lower half, but it isn’t and it doesn’t. One is therefore obliged to worry about what one is seeing in the minge department, and although that shadow is in fact a pair of panties, appalled onlookers should not have been subjected to the stress of worrying about it in the first place.

WTF does not even know what this is. He looks like the lovechild of a postman and a kangaroo’s pouch.

And finally we have model and presenter Heidi Klum in ridiculous Louboutin boots.

This week’s It’s Got to Go comes from WTF stalwart and aficionado, Leslie from Lisson Grove. Rest your appalled gaze on these pantyhose, handmade by German artist Daniel Struzyna through the Etsy online store Tinkercast. 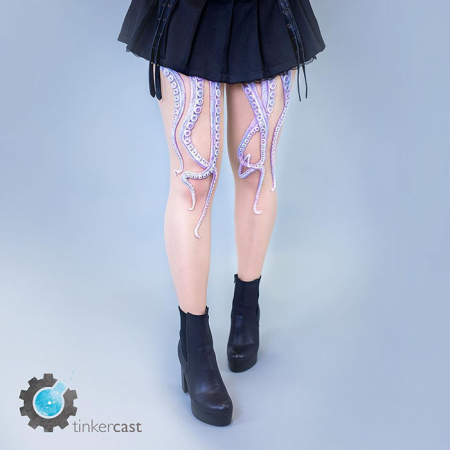 Leslie has two observations, both pertinent. First, he says the model looks as if she is leaking. And second, he says, Lord alone knows where the rest of the creature resides! Agreed. It’s Got to Go.

OK Readers, that’s your lot for this week. Please send in your comments, as they have been sparse of late and you know how WTF frets when she is denied sight of signs of life out there. And don’t forget your utterly splendid suggestions for It’s Got To Go. Let us meet again next Friday. Be good. x