Here’s the thing. For the last 18 months the country has been at each other’s throats over Brexit. The Brexiteers think that the Remoaners are refusing to honour the outcome of a democratic vote and, worse, are out to sabotage it. The Remainers think that the Brexiteers are misinformed, misled and, in many cases, downright dumb. Negotiations are in the hands of David Davis, a man so profoundly unsuited for the role that Mickey Mouse wears a David Davis watch. The idea that we should leave our political and economic future to him is disturbing because (a) he is an idiot and (b) he lied to Parliament about impact assessments, for which there has been neither an apology nor an explanation and (c) you cannot rely upon anything he says. Last Friday, we were told that Mrs May had secured a great deal with the EU to progress onto the next stage  of negotiations, and that we had agreed to fork out £39 billion (the money David Davis told us we would not have to pay). Then on Sunday, Davis said that the deal was not binding. Then on Monday, he said that it was binding. Then the EU said that it was only a gentleman’s agreement but they regarded it as binding. So is it an agreement or not?  When will it become an actual agreement? Will white smoke emerge from the Downing Street Chimney? Even then, how will we know that it is just not hot air blowing out of David Davis’ fundament?

On Wednesday, Parliament voted for an amendment giving it the final say on the final agreement (if it actually is an agreement, which it might not be, even if David Davis says it is, see above). Previously all that was on offer was a take-it-or-leave-it vote without any chance to demand a change. Eleven Tories led by the splendid Dominic Grieve, the man Cameron sacked as Attorney-General for sticking up for Human Rights, voted for the amendment, leaving Mrs May with another bloody nose. Cue the usual outrage. The Mail spat blood, calling them “traitors”. The Express, owned by a soft-porn-merchant, referred to the rebels being “slapped down in a patriotic attack”, which turned out to be reference to the appalling Nadine Dorries MP, best known for prancing about in I’m a Celebrity Get Me, Out of Here, calling for them to be deselected. Twitter raged. Why? They wanted Parliamentary Sovereignty restored. Well now it has been and they don’t like it. It does not get any more Supreme than the Supreme Court but they did not like it when M’Lords and M’Lady decided the issue of Article 50 either, even though we supposedly voted to restore the supremacy of our judicial system. To the Leavers, because we voted to Leave, no one gets to question when we Leave or how we Leave or on what terms we Leave, even though none of these things were decided upon in the vote and most people did not know the difference between the Customs Union and their left buttock. They parrot the word democracy but revile the right of those we voted for to use their conscience and common sense to ensure that we Leave on the best possible terms. For anyone to want a say is just treachery, innit? And so we end 2017 as we began it, with recrimination, suspicion and mutual contempt. And the weatherman says that there is more to come in 2018.

On a happier note, Readers, next week, there will be the much-loved WTF Christmas Turkey Poll where 20 vile examples of fashion disasters await your selection. Remember – vote early and vote often! You know you want to….

Let us lighten the mood with our weekly review of sartorial silliness, starting with actor Chris Sullivan  at the GQ Party. There wasn’t room for him last week.

Chris has a penchant for loud suits and this one is positively deafening, like a bad bedspread in a Bognor bed and breakfast. Extra minus points for the cream brogues, which have absolutely nothing to do with the price of fish.

Nice to see Sofia getting into the Christmas spirit dressed as everyone’s favourite purple-wrapped chocolate in the Quality Street box.

Next up, we have singer Rita Ora out and about in New York, wearing Estaban Cortazar.

How much tartan does a person need? There is enough here to clothe a whole clan of McOras, set off by a jacket that seems to be composed of old flock wallpaper, a randomly hanging paisley shirt and puce bootees, like a rag doll. 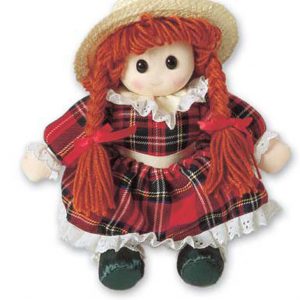 To the British Independent Film Awards in London, where we encounter a newcomer to these pages, actor and singer Cosmo Jarvis. 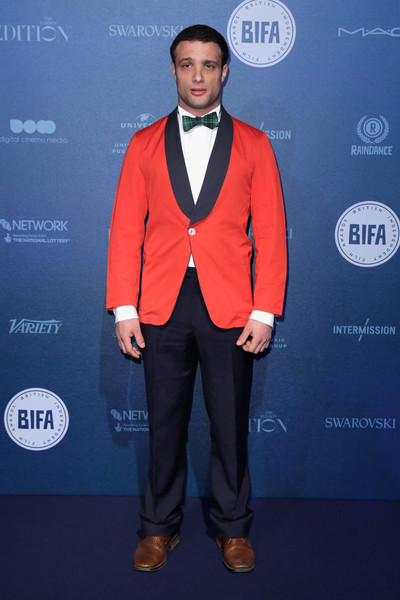 Cosmo looks mortified, as well he might, because he has come to the event dressed as a hotel bell boy. The jacket is too short, the trousers are too long, the green tartan bow tie (why?) is wonky and the shoes are plain offensive. Cosmo must have spent the whole evening dodging requests from people to bring them their luggage.

The top is pretty but under the obligatory sheer shirt, Joanne seems to be wearing a pair of Elizabethan pantaloons last seen on Sir Walter Raleigh.

Still in London, we pop in to the premiere of The Last Jedi  and actress Daisy Ridley, wearing Calvin Klein.

Calvin Klein is taking the piss because this is a bin bag. That is all there is to be said.

Singer Janelle Monáe went to the Refinery 29 exhibition in LA wearing a Kaimin outfit, a headpiece by Dead Lotus Couture (no, me neither) and Via Spiga boots.

This is certainly striking, as in struck in the face striking. WTF can best describe this as the top half of one of Lewis Hamilton’s discarded racing outfits with padded shoulders, worn with Mickey Mouse ears.

The hair and makeup are gruesome and the outfit is the lovechild of a sleazy Superwoman and a medieval be-bowed troubadour, including the bow tied around the knee. All she need is a mandolin. Everything is on display but who wants to see it? There are slashes in the leg like windows in a church steeple and a worrying headlong rush down to the crotch, putting onlookers in fear of an imminent Minge Moment.

This week’s It’s Got To Go comes from WTF aficionado Yvonne from the Borders who has taken objection to South Tyneside Council in the North East which has installed anti-sleeper slabs to stop people sleeping rough. 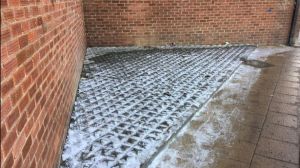 Does the Council suppose someone chooses to sleep rough in the coldest winter we’ve had for years? Does it suppose that someone thinks, ‘oh hallo, it’s  minus 3, why don’t I bed down in a corner and have a nice night’s kip?’ No? If you don’t want people sleeping rough, give them somewhere to go and some money to pay rent. Happy Christmas to you, South Tyneside Council. It’s Got To Go.

OK Readers, that’s your lot for this week. Please keep those comments coming in as WTF just loves them to bits. And don’t neglect your excellent suggestions for It’s Got To Go.  Let us meet again next Friday. Be good.