The day after little Ed Miliband got trounced at the General Election, he stepped down as Leader of the Labour Party and the race for his successor was on. The main contenders were Yvette Cooper with the short hair and disapproving expression of a schoolteacher facing a classroom full of indolent thickies; Andy Burnham with eyelashes like a pantomime horse; and bouncy-haired Liz Kendall of whom no one had ever heard and whose policies seemed somewhat to the right of David Cameron’s. All of them sought to distance themselves from the very policies they had espoused only days earlier when campaigning for a Labour Government. Then Jeremy Corbyn, a bearded lefty  backbencher straight out of central casting, entered the fray and since then it has all gone tits up for the other three.

Corbyn wears a vest (that is an undershirt to you US Readers) and belongs to the All-Party Parliamentary Cheese group. WTF would like to know what they do at the Cheese Group? Do they sit around discussing the respective merits of Stinking Bishop and Shropshire Blue (or in Jeremy’s case, Red Leicester?). He is a veteran left winger who differs from his rivals in one very important aspect. He has policies he actually believes in. And what is more, they are the same policies he has always had.  He is an unashamed socialist. He believes in re-nationalising the railways (so does WTF) and the Post Office (so does WTF) and the utility companies (so does WTF), things we used to own until they got flogged off in a garage sale to hedge funds and mates of George Osborne. He is against Trident (so is WTF). He is against the absurd vanity project that is HS2, a high speed railway that will decimate beautiful British countryside (so is WTF). He is sceptical about remaining a member of the EU (so is WTF). He does not want to spend time inserting his head into the back bottom of media tycoons and business magnates. He always opposed the Iraq War, student tuition fees and the Tory Government’s new Welfare Bill. This is all good stuff. He does seem to have been keeping company with some dodgy Holocaust deniers but WTF does not believe that he is an anti-semite. However, whether the country will ever vote for him is another question altogether. WTF does not believe they will and he has yet to explain how all his plans for the NHS and Housing and Education and other largesse are to be funded.

Burnham, Cooper and Kendall are now fighting amongst themselves like bald men bickering over a comb. And a comb has more teeth than any of them. Each is attacking the others for not stepping down. Cooper is playing the is-it-because-I’m-a-woman card? (Answer – no). Burnham is blaming Cooper for getting in his way as Leader. Kendall is claiming conspiracies. But the plain fact is that none of them is inspirational or impressive, just career politicians without any discernible personality or conviction.  If you want Tory-lite, you might as well vote Tory. Without Scotland the Labour Party can never win another election and Scotland has slipped away from Labour completely, probably never to return. Perhaps if you are going to be condemned to a long period in opposition, you might as well have someone who actually will oppose. But either way, the future seems bleak if you are not a Tory or Scottish Nationalist…..

To the fashion debacles of the week starting with Liverpool footballer Fabio Borini on his wedding day to Erin O’Neill. 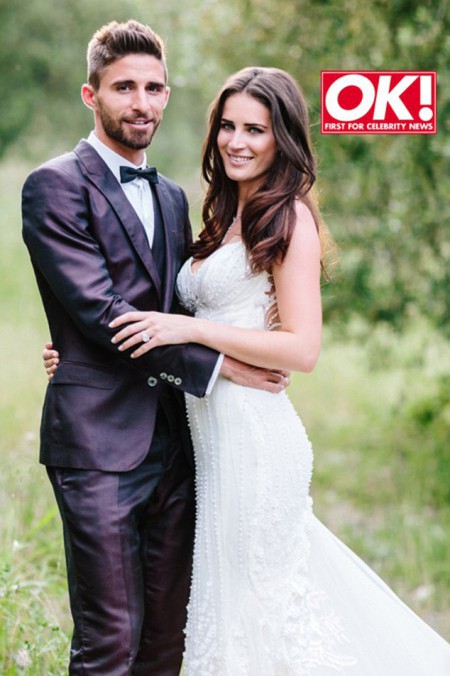 Erin is a bit over-embellished over the tits for WTF’s taste but her main concern is for Fabio who looks like a pillock with that ridiculous hair, shiny aubergine 3-piece suit and silly barmitzvah-boy bowtie.

Now we have Orange Is The New Black’s Taylor Schilling out and about in Amsterdam wearing a Vatanika shirt, 3.1 Philip Lim shorts and Giuseppe Zanotti sandals. The sandals cost £1147. 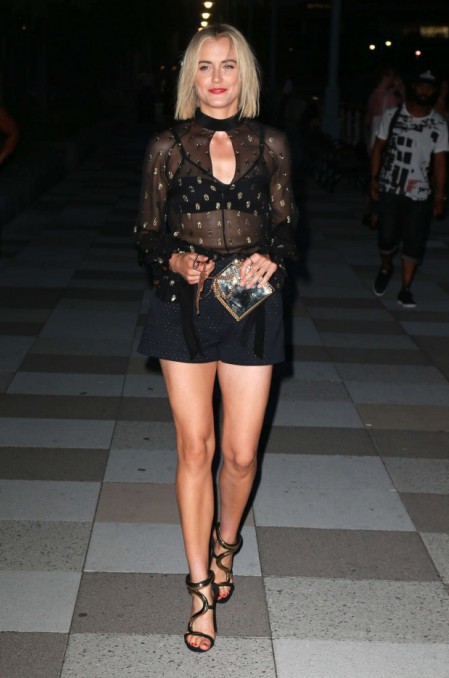 Love her. Hate the hair. Hate the sheer bra-flashing shirt with unnecessary keyhole. Hate the sandals like snakes nestling on her insteps. She has terrific legs but nothing can save this outfit.

Next we meet Oscar-winning actor Christian Bale at LA Airport (seen here with his young daughter) wearing something picked out of a skip. 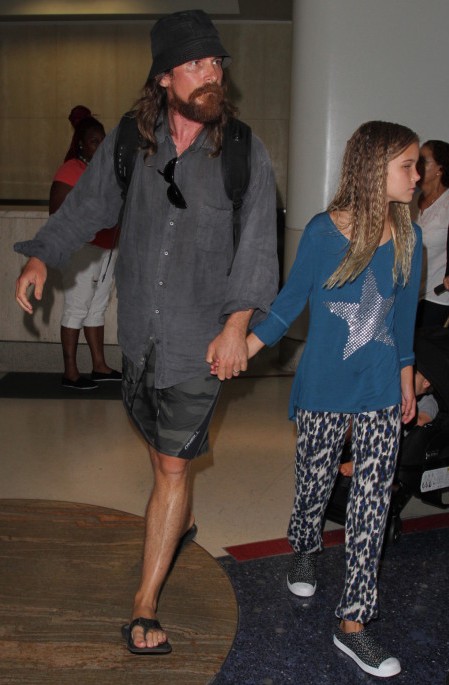 After World War 2, Japanese soldiers disappeared into the forests in Borneo and such in order to avoid capture and emerged 30 years later blinking in the sunshine to discover that in the meantime they’d gone and invented the Internet and colour TV. Christian looks like he has been in hiding for a similar period without access to washing and shaving facilities and that fishing hat is an abomination in the eyes of the Lord.

WTF can say with confidence that this is one of the silliest things she has ever seen in the history of ever. It is as if a giant bridal veil has just floated randomly past and attached itself to Lindy’s chest. Bonkers.  Someone has also overdone it on the rouge…. 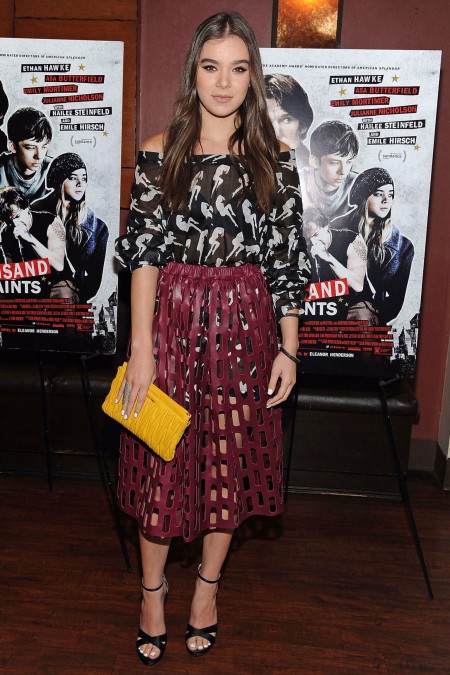 When WTF was young, no one stepped out anywhere dressed in plastic traffic netting, not even road workers. But in the second decade of the 21st century it is positively de rigeur. First we had aspiring actress Joy Villa at the Grammys wearing an André Soriano dress made out of the original orange netting and now we have Hailee wearing a purple Miu Miu version. And it’s still shit.

To the Teen Choice Awards and rapper Flo Rida.

This outfit is nobody’s choice. Without trying to bring the tone down to a level even lower than the usual vulgarity of this blog, the red running down his inside leg and onto the silk trainers seems like a transgender version of the phenomenon known as “free bleeding”. Whatever it is, it is unpleasant. Just go away. 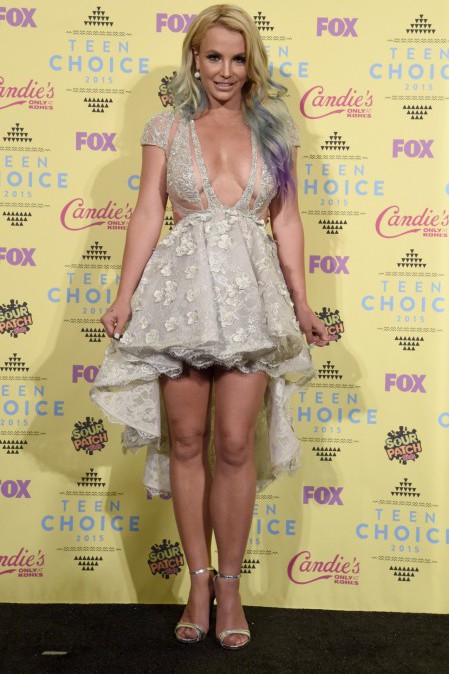 Oh dear. Tinkerbell goes on the game. And that hair! Those cheese-slicer sandals! Just terribly, terribly terrible. Time for Mikael D to consider a new line of work. Like street sweeping.Meanwhile what has happened to Britney’s face? There is more than a suspicion that there has been some interference with the workings of nature….

This week’s It’s Got To was suggested by WTF aficionado Mark from Romford who takes great exception to crocheted clothing. In fact, Mark even sent WTF a picture to illustrate his displeasure.

Mark has 2 main objections, both of them valid. First, he does not want to see what lies beneath the crochet on either men or women. And second, crochet is just ugly. WTF would add that it is also often either lumpy or silly or both. Like here…. It’s Got To Go.

OK Readers, that’s your lot for this week. Keep those comments coming in. When they dry up WTF goes all moody and pisses off her nearest and dearest by sulking and looking anxious. And do not neglect your excellent suggestions for It’s Got to Go. Let us meet again next Friday. Be good x