WTF had never heard of Dapper Laughs, the cockney geezer alter ego of “comedian” Daniel O’Reilly until she received a tweet last Monday from WTF aficionado Annette Lewis demanding that Dapper must feature in It’s Got to Go. On investigation, it emerged that Dapper’s patter consisted of gags such as “I’m holding a knife – lift up your fucking skirt” and “get out your gash” and “it’s only sexual harassment if she’s more attractive than you”.  Not to mention the side-splitting line “get some duct tape and rape the bitch”.  It is perhaps unsurprising that Daniel thought himself funny, given that Daniel père tweeted of a woman journalist who criticised his son that a mugger had told her “your [sic] to [sic] ugly to be raped”. The apple does not fall far from the tree. Other Dapper supporters deluged the woman with abuse, calling her “a fucking slag” and advising her to get back to “whore island, you ugly c**t”. Nice. A man is known by the company he keeps and the audience to whom he appeals….

Dapper shot to fame through social media and social media did for him almost as fast. Only 24 hours after he came into WTF’s life, a Twitter backlash had finished him off. ITV2 pulled his new show and his forthcoming tour was cancelled. Daniel announced that he had killed off Dapper in the same way as Jack Worthing condemned his imaginary younger brother to death by influenza in The Importance of Being Earnest and appeared on Newsnight to be savaged by presenter Emily Maitlis where he opted for a confusing line of defence, simultaneously admitting some of his gags had gone too far, snivelling that he was satirising misogyny, not endorsing it and portraying himself as having fallen foul of an over-censorious age. “Oh, so you’re the victim are you?” queried Emily icily. Daniel squirmed. It was like watching a bully brought up short by a much bigger boy who was about to kick the shit out of him and all the more enjoyable for it.

Here is WTF’s take on the late Mr Laughs. He was not only as funny as a bad dose of shingles but he was all about trying to making rape and violence against women funny. And they are not, never were and never will be funny. His loathsome alter ego encouraged brainless, sexist louts to laugh at the idea that women deserved no respect and were there to be slapped about, groped or screwed, with or without their consent.  Daniel told Emily that Dapper had appealed “to a certain demographic”. Yes – to unpleasant morons.

To the many and various sartorial shockers of the week, starting with actress Kym Marsh off Corrie. What you are about to see is the unique look that is Soap Star Style.

More orange than a warehouse-full of Christmas clementines. Makeup applied with a trowel. (Fake) tittage on display. Foot blotch. Tattoos. Is this really what women aspire to look like in Britain today?

The MTV EMAs were surprisingly well dressed, much to WTF’s disappointment, but there is always a bad’un and here is show-off Scottish singer Tallia Storm wearing I know not what. 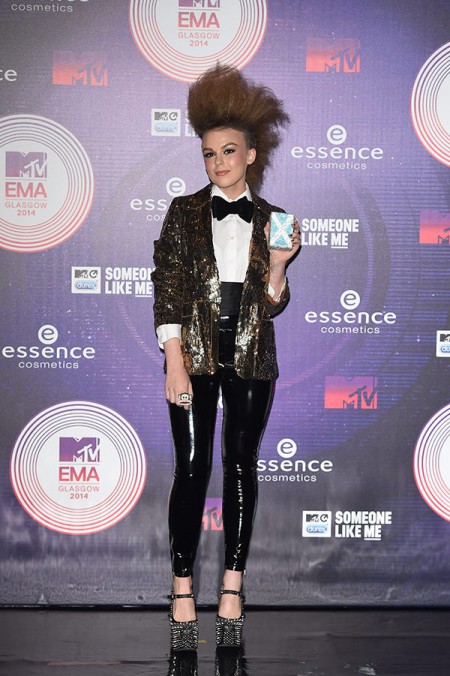 Sigh. That hair is beyond comprehension, as if she has stuck her fingers into the mains. The outfit is awful. This girl just makes you want to grind your teeth to powder.

Melbourne-based Toni has squished Karolina’s chest behind a mesh tit-window and coupled that outrage with a mesh Minge Moment. This dress proves WTF’s Golden Rule, namely if it looks shit on a supermodel then it probably is. The sandals, however, are good.

Ghastly socialite Hofit Golan exists for no obvious purpose other than to flash her bits in public and here is she at the premiere of the latest Hunger Games wearing – well, who else could it have been – WTF bugbear Julien Macdonald. 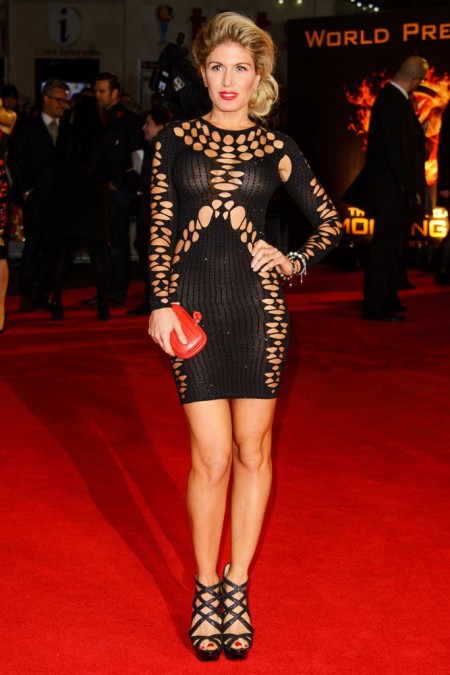 There was a gala for Louis Vuitton at the Metropolitan Museum of Modern Art last Friday where a lot of fashionable folk turned up wearing the eponymous label and looking absurd. How can people pay so much to look so bad? We start our review of overpriced designed tat with Contributing Vogue editor André Leon Talley.

André looks like an extra from Game of Thrones. Why is he going out and about dressed like this? And what the hell is that around his neck?

And then there was New York-based architect Peter Marino, responsible for designing, inter alia, many high-end fashion stores.

There is no possible excuse for dressing like this unless you are part of a Village People tribute act and especially if you are 62 and straight. That is all there is to be said about Peter Marino’s outfit. Next!

Also there looking daft, although rather sweet, was singer and music producer Will.i.am. 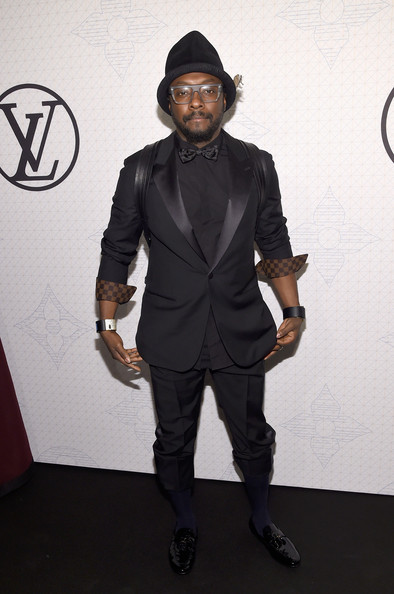 Readers may wonder why, as WTF aficionado @sumarumi sagaciously enquired, Will is wearing a Bill and Ben flowerpot hat. For those of you under 50, Bill and Ben the Flowerpot Men were part of the BBC’s afternoon entertainment for children in a more innocent age. The one in the middle is their friend Little Weed.

WTF is also bewitched, bothered and bewildered by Will’s trousers like lacy plus-fours and which make no sense, not even of any kind.

Now to singer Aubrey O’Day, a member of re-formed girl group Danity Kane, wearing Just Enaj (that is the name of the designer and not WTF’s view on the adequacy of the cover provided by her “dress”).

Quite apart from the hideous vulgarity of the dress (her tits are way too big for this style, not that style is remotely the mot juste), the flesh-toned panel is pale beige and her flesh is the colour of paprika. As for her makeup artist, s/he should be sacked on the spot.

WTF has seen some bad camel toe in her time but this one, on Khloe Kardashian, is about as bad as can be, and then some. Careful now……

Ouch! This falls squarely into the category of Call for the Canesten. Wearing trousers this tight should be a public order offence. The booties are, of course, Christian Louboutin worn with a matchy-matchy belt and there is a lot of globular tittage. It is of course unsurprising that those jeans are so snug with her ridiculous fake bottom…

This week’s It’s Got To Go was suggested by WTF aficionado Kate who points out that most Ugg boots are not outdoor wear and are not designed to be worn in slippery conditions which is why so many people fall arse over tit and clog up the Accident & Emergency Wards of our over-worked, under-funded NHS. They are also not supposed to get wet because then they get smelly. By all means keep your tootsies warm but either buy Uggs with proper outdoor soles and ankle support or keep them for padding around the house. 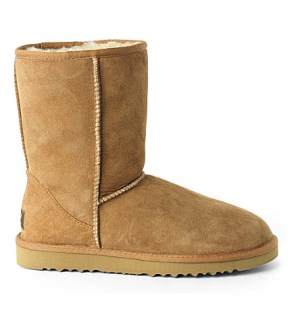 OK Readers that’s your lot for this week. Loads of comments came in last week which made WTF very happy and there were some top suggestions for It’s Got to Go, so more of the same please and let us meet again next Friday. Be good x