WTF It’s a No Special

Posted on September 19, 2014 by fashionshark

It’s a No vote and Scotland remains in the UK – for now. But whilst WTF is happy about it, she has the following observations…

1. Westminster shouldn’t crow about this because they made a real mess of it. This was success achieved through sheer panic. For most of the campaign, politicians just assumed it would be a No. Then, like children realising that they had exams tomorrow and had done no revision, they poured into Scotland like hot shit off a shovel promising all manner of goodies and tax advantages. You want more money? Take it! You want more devolution? No problem!  It was a sort of Scottish Supermarket Sweep, only much more expensive and now, like Oliver Twist, the Welsh are calling for more and Cornishmen and Yorkshiremen and Cameron is burbling on about more powers for everyone and it is a total mess.

2. English MPs voting on English matters means a Tory view on everything. This is not a good development for people living in England.

3. How (and WTF touched on this last week) embarrassing was it that our own Prime Minister recognised that his active participation in the debate to preserve the Union he heads would result in an increase in the Yes Vote? As a result, he was reduced to snivelling and pleading, actually enunciating that people should ignore now much they hate him because he would soon be gone, honest. It was hardly a Churchillian call for unity. Little Ed Miliband was not much better and, in the main, stuck to Cameron and little Cleggy like chewing gum to the sole of a shoe. At least Gordon Brown  sounded like he actually cared. Perhaps he should have been wheeled out earlier.

4. The Scottish Labour Party is not a good thing. And it assumed that Labour voters would simply follow their support for a No Vote and not notice that it is not a good thing. But they didn’t and they do. Which augurs ill for the future. They should stop expecting support and do something to earn it.

5. In the main, the debate showed a degree of engagement and passion clearly missing from normal politics where most people cannot be bothered to vote and have no understanding and less interest in the issues of the day. The turnout North of the Border was enormous. Although there were a few instances of bully-boy tactics, it was hardly widespread despite the attempt by the Daily Mail to suggest that anyone wanting to vote No was in danger of being torn apart by Celtic Ruffians last seen showing their arse in Braveheart. Every time The Mail took this line, it damaged its cause all the more. The Mail also expressed great disapprobation at Andy Murray having the temerity to support independence on the grounds that he is supposed to be British and we all cheered for him at Wimbledon. But then The Mail’s grasp of democracy has always been a little shaky…

6. Cock of the Campaign was Mad Jim Sillars who admitted on Radio 4 that he had only threatened retribution against companies who decamped south post-vote in order to get himself on the radio.  This is the equivalent of mooning to get yourself on camera during a football match and it is a poor show. Even Alex Salmond was embarrassed and that’s saying something….

Don’t think this is the end. It isn’t. It isn’t even the beginning of the end. You can’t put the genie back into bottle..

We move to the sartorial horrors of the week, starting with former X Factor contestant and professional loony-tunes Kitty Brucknell wearing not a lot…..

It seems that fashion nowadays, particularly if you have an album coming out, means walking about in a net curtain, flashing your knickers and having pink and purple hair like Mrs Slocum, the character in Are You Being Served? who kept talking about her pussy(cat). And whilst WTF is not sure who has the figure to wear this nonsense, she does know that Kitty is not that person.

Those browny-orange tits like a couple of hillocks in a drought. The terrible fake tan. The dress borrowed from a Detroit drag queen. It is a bit much just to eat some overpriced grilled salmon and a rocket salad. Just. Go. Away.

In Dirty Dancing, Patrick Swayze said of Jennifer Grey’s character (who was wearing a very pretty pink dress, unlike this one) “No one puts Baby in the Corner”. If he had seen her in this lurid, inflammable, empire-line nighty, he would have put her in a cupboard – and locked the door. As for the brogues, they are the ugliest footwear WTF has seen for a long time and are more suited to Miss Marple trudging through bloodstains and sundry clues in St Mary Mead.

There can only be one topic for this week’s It’s Got To Go nominated by Readers Michael from Sydney and Gemma Hansen. I refer of course to the Colombian Women’s Cycling Team’s get-up with its trompe l’oeil front frontal. It is in fact a onesie with nothing actually on show. 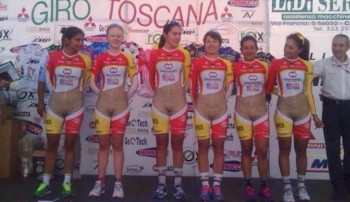 No! NO! This is not acceptable. At all. It may be faux-minge but it is still minge. These women are supposed to be athletes, not lap-dancers. I have yet to see a male athlete’s costume involving a faux-penis. In football men even get booked for taking their shirt off.  The team should set about whoever designed this affront with a bicycle pump and keep on pumping….

Abbey and Julien go together like tight shoes and bunions and as we know, both are a pain. Knickers are anathema to them and this dress does not permit of a bra so there is visible nipple activity. Julien’s style has become so tiresomely predictable. Minge moment.  Nipple flash. Peekaboo. Yawn.

Then there was fashionista Olivia Palermo wearing Marchesa at Marchesa.

Marchesa had some bad dresses this week but this was one of the worst, a cross between a Lladro figurine (WTF’s Mum was very big on Lladro but it gives WTF the pip) and a lacy loo-roll holder with just a touch of Little House on the Prairie.

And then, for reasons WTF cannot fathom, try as she may, there was rapper Tino Kamal wearing Versace leggings and a lot of dead furry animal. 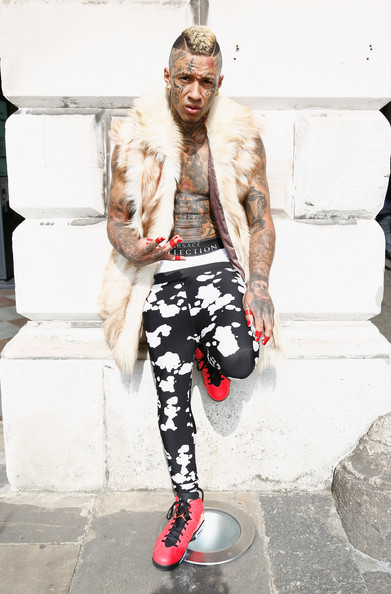 Blimey. He looks as if he tore the pelt off the animal with his bare teeth, those leggings are not outdoor wear and what are those red plasters on his digits? (Perhaps he needed them after wrestling with the animal before skinning it and they do match his splendid trainers). He has a dead fish on his head and seems to have wandered into LFW fresh from playing Magua in Last of the Mohicans.

This is just revolting. Here is a model at Meadham Kirchoff ‘s show wearing a used tampon earring. It may not surprise you to know that both Meadham and Kirchoff are men. 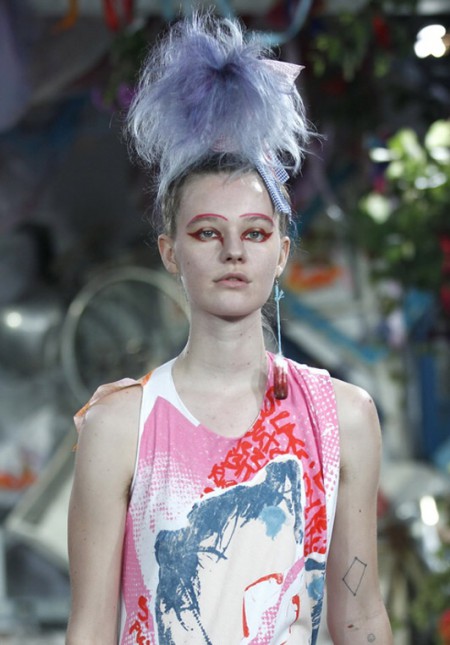 Why?   What’s next? How about a colostomy bag as a necklace? Horrible.

Finally here is singer Nicki Minaj strutting her stuff in a Paris nightclub.

WTF aficionado Dee articulated her chief objections to Nicki Minaj as the fact that she (Nicki not Dee) dresses as and applies her makeup like a blow up sex doll. And was she wrong? The outfit would have been fine had there been more top and less tit. But there wasn’t.

OK Readers, that’s your lot for this week. Keep your comments coming in and your excellent suggestions for It’s Got To Go and let us meet again next Friday. Be good x

5 Responses to WTF It’s a No Special