Posted on September 5, 2014 by fashionshark

Last week WTF railed against the Ice Bucket Challenge, part of which requires you to post a picture of yourself on Facebook or Twitter undergoing this watery version of auto-da-fe. WTF saw this as part of the inane me-me-me-ism that pervades modern culture. Coincidentally this week’s It’s Got To Go was going to be about selfies at the suggestion of WTF aficionado Amy Wyatt who expressed her disapprobation at the word, the people who take them and the concept itself and she is absolutely right about all of these things and the arrogant assumption these people have that you are interested in photos of their bits or of their fried chicken supper. Only a few days ago, a poll showed that the public is irritated beyond measure by publicised selfies, particularly those of celebs in their bikinis or undies or flashing their thighs. This week, it literally all went tits up with sexy selfies of famous actresses plucked from the iCloud and published on the Net for scrofulous boys, leering lads and dirty old men to gawk at. Cor!!! Looks at the tits on her!!! She’d get it!!!

Let us be clear. No one has the right to steal private photos and the fact that any subject of those photos has been seen on film or in a magazine minus some or all of her clothes does not entitle sleazy, prurient web users to log on and perve up. This was an act of theft laced with an unpleasant misogyny deserving of punishment and those who access these pictures are equally culpable in aiding and abetting that crime, including the media publishing tempting glimpses to whet the appetite. But it was an accident waiting to happen. No technology is uncrackable and if you store pictures of yourself in the iCloud stark naked or having sex with yourself or someone else, even if you think you have deleted them, sadly the chances are that you may be viewed by a wider audience than just you and your partner, especially given that the concept of privacy has become so eroded and the sense of entitlement to know everything about celebrities so voracious.  If you must take pictures of your vagina, use an old-fashioned camera, admire the results and then delete it. Or better still, desist and do something more sensible and less self-obsessed instead.

To the sartorial horrors of the week, featuring a lot of badly dressed men looking silly and a few women flashing the flesh. We start with the splendid Aaron Paul from Breaking Bad, out and about in LA in a baby blue ensemble. 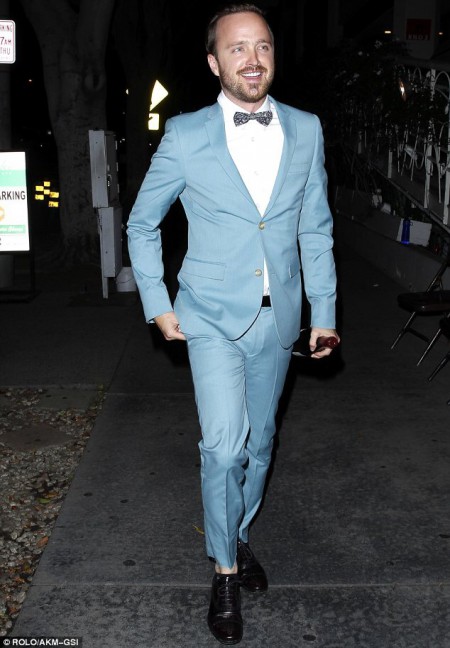 WTF could (just about) have got past the colour of the suit but frankly that is the least of it. The Norman Wisdom jacket is too tight and the trousers are too short, what WTF aficionado Paul from Romford tells me are known as “jack ups”.  Aaron is also doing that stupid no-socks-and-brogues-thing WHICH WTF REALLY HATES, almost above all things, his shirt collar is going walkies and he does not appear to be wearing any underpants, thereby exposing us to a trouser snake moment that is neither nice nor necessary.

To the Scottish Fashion Awards 2014 held, for some reason, in London. Mind you, this first lot are Londoners. I give you Made in Chelsea Old Etonian Pillock (is that tautology?)  Oliver Proudlock wearing bespoke tailor Joshua Kane who is the prat in the hat. In between is stylist Soki Mak wearing Clio Peppiatt. 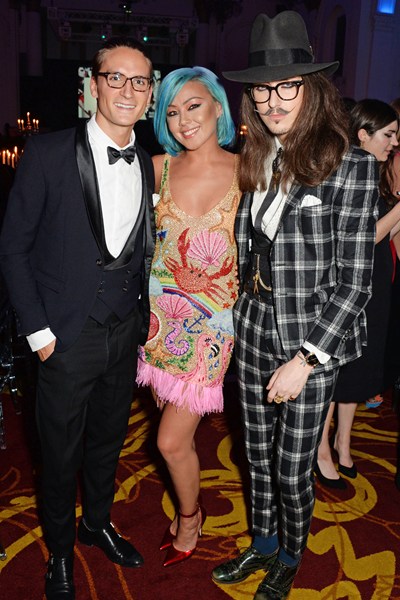 Oliver looks good which is more than can be said of Joshua, who appears to have modelled himself on a cross between Charles 1 and Salvador Dali, is wearing lairy checks and whose trousers have had an argument with his ankles displaying blue woollen socks. Meanwhile, on the assumption that Soki was her own stylist, she should sue herself for negligence. The combination of blue hair, pink fringing and red silk shoes is positively emetic.

If this next picture does not you have praying for a Yes vote, nothing will. We have Israeli-born journalist and satirist Nimrod Kamer and Scottish-born designer Philip Colbert  both presumably wearing Philip’s design. Well, someone has to…. With them is ubiquitous Irish TV presenter Laura Whitmore wearing Scottish designer Holly Fulton. 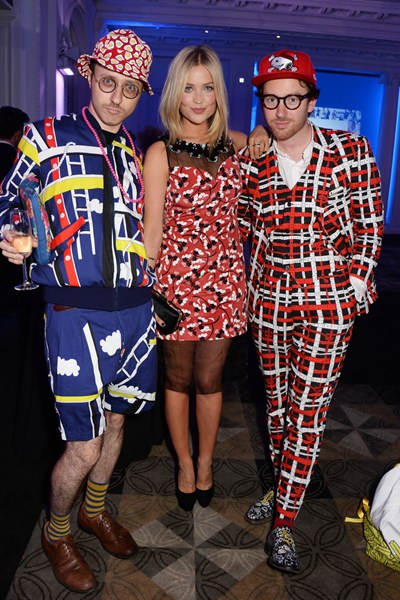 Well, at least they’re colourful……Laura’s dress would be much improved without the sheer bits, Philip’s crumpled shirt is a public scandal and Nimrod’s very hairy legs should not be on display, particularly in those socks. They are probably making a statement. Here is WTF’s statement. Just go away.

This week’s It’s Got To Go was suggested by @GazaBoatConvoy with WTF in full agreement. Tuesday’s GQ Men of the Year Awards gave Philanthropist of the Year to none other than appalling warmonger Tony Blair who has been distributing some of his huge bank balance to African charities various. Is this a joke? The money has been earned on the back of his property investments, his dodgy engagements advising dictators how to gloss over murdering protesters or ruining the environment with oil pipelines, his speeches to adoring Americans at $200,000 a time and his failure to bring any semblance of peace to the Middle East. WTF does not know what is the more shameful – the award itself or Blair turning up to collect it. Either way, It’s Got to Go.

To the GQ Awards themselves where nastiness was all around. You are not getting Kim Kardashian dressed as a Hamburg Hooker because WTF has exiled her to @WTF_EEK (so you had better get following, hadn’t you?).  But instead you can have Cara Delevigne wearing  Burberry Prosum. 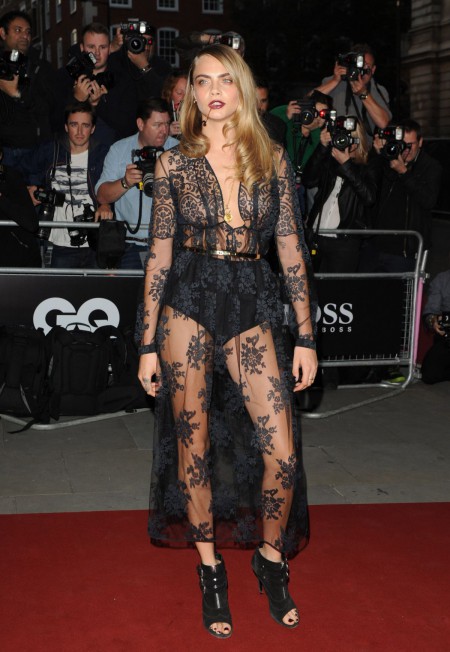 Hate the dress. Hate the granny pants. Hate the belt. Hate the shoes. Hate the mouth ornament, like a fish caught on a hook. Hate the makeup. Hate it all. The end.

Nicole Scherzinger has appeared in this blog on many an occasion but she looked lovely on the night wearing Ermanno Scervino. The problem was her partner, Lewis Hamilton wearing Armani and D2quare2 Trainers. 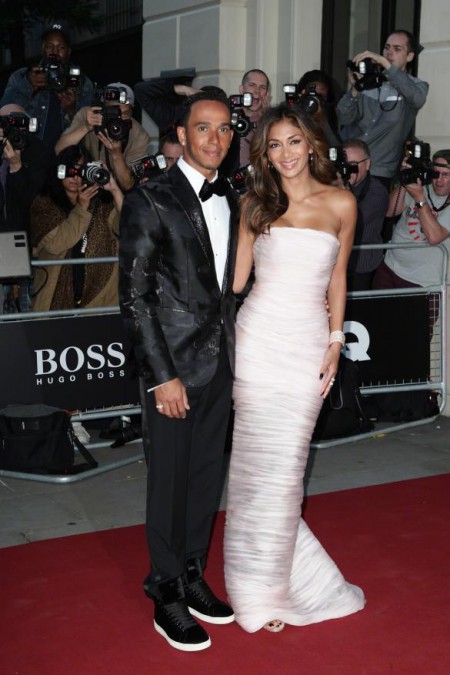 His über-shiny tux seems to be covered with motor oil and is too big for him whilst the hi-top trainers with thick white soles are simply an abomination and should never be worn with a DJ. Ever. And what’s with all that bling on his fingers and ears? He looks like a human discoball.

And of course there was Pharrell Williams wearing who knows what. 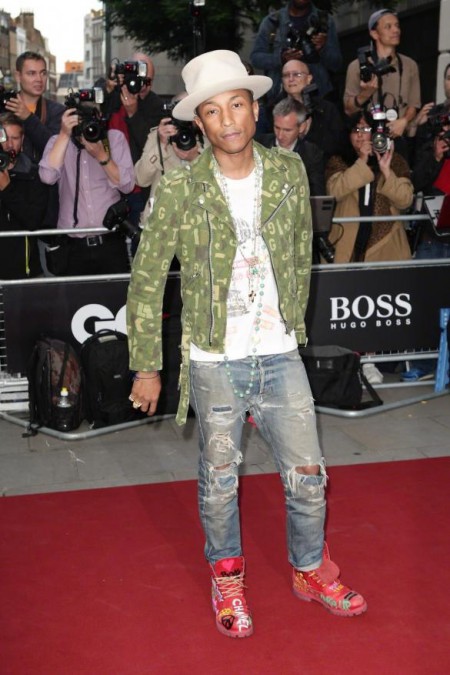 Yet again Pharrell is showing us his knees. He likes to show them off at all times. Each item of clothing (apart from the hat) is deplorable both on its own and in combination and whilst this may sound old fashioned, the dress code was black tie not laundry basket.

This last one is sad. Here is Catherine Deneuve at the Venice Film Festival wearing Jean Paul Gaulthier Couture. 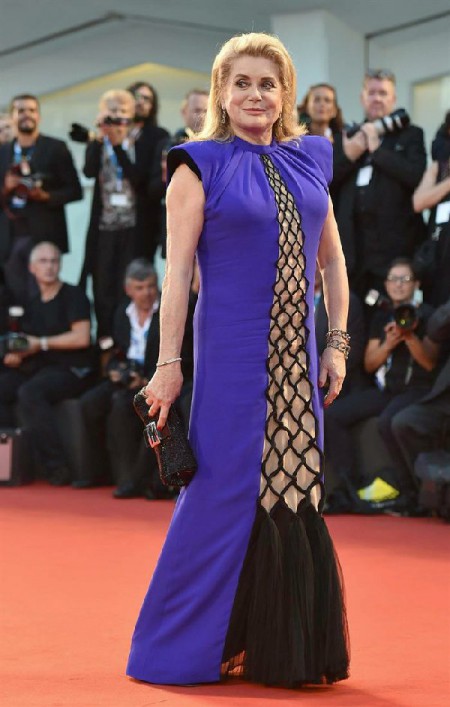 Catherine! Mais non! C’est dégueulasse! Why would you even leave your bedroom wearing this? It is so terribly unflattering. The underdress resembles an Elizabethan leaded-light window with tassels and the purple cape-thing seems to be a quarterback’s jersey remodelled for a Chinese Emperor. Had Catherine and Jean-Paul fallen out? They certainly should after this.

OK Readers, that’s your lot for this week. Don’t forget to keep sending in your excellent comments as well as your suggestions for It’s Got To Go and let us meet again next Friday. Be Good x