Posted on August 9, 2013 by fashionshark

WTF is stepping away from the issue of trolls as she is more than a little bored with the recriminations over who did and who did not observe Sunday’s twitter silence, a topic generating as much heat and vehemence as the collaborationists in post-war France. Anyway, there is a far more important matter for our consideration. I refer to the Simon Cowell Baby.

For those of you who are visiting from Mars and may not have caught the news of late, Simon has impregnated a woman called Lauren Silverman who may or may not have been sleeping with him whilst still with her husband Andrew, a man now doomed to play the role of the most prominent public cuckold since Menelaus. According to what paper you read, Simon and Lauren are either madly in love or had split up weeks before her public declaration of pregnancy; she is either a fun-loving, confident woman or a scheming minx; Simon is either over the moon or deeply appalled; and she is either demanding her own reality show and a house in the Cotswolds  or he has bought her a $10m mansion in Hollywood. In other words, no one knows a bloody thing and is making it up and calling it news. The Daily Mail has hardly reported anything else for a fortnight. Simon has engaged the services of  publicist Max Clifford, whilst over in New York lawyers Shyster, Shyster and Shyster are doing battle on his behalf with Andrew’s lawyers Grabbit, Chargeit and Spendit and both sets of lawyers are probably at war with Lauren’s lawyers Sue, Sue and Sue Again and it is all extremely unedifying.

Meanwhile the Witches’ Coven of Simon’s exes, Jackie, Sinitta, Terri and Mezhgan (who are pretty much interchangeable and who all have stuck to him like shit to a blanket even though they mostly cannot abide each other) are said to be deeply dismayed. Each of these ladies is still friendly with the hairy Lothario and has spent countless holidays with him, including floating about on the yachts which Simon used to hire jointly with Menelaus and the sultry Helen of Troy that is Lauren Silverman.  Mezhgan, to whom he was engaged, still travels with him as his makeup artist and he has bought her a house, and, if memory serves, one for Terri as well. If the Coven could receive such largesse having just gone out with him, who knows what riches Simon will rain into Lauren’s lap as mother of the Dauphin and heir to the Cowell multi-millions? The whole thing resembles a particularly noxious edition of The Jeremy Kyle Show with Jeremy berating Simon for not having “put something on the end of it” and Graham, the bearded bloke who dishes out pseudo-analysis to the chavs and druggies, consoling Sinitta as she wails “it should have been me” and everyone having a punch up and being separated by those tattooed man-mountains employed as bouncers. Personally WTF thinks that Simon should charter another yacht  and sail off into the sunset with Lauren and the Dauphin and the Coven and if he could take David Walliams and Amanda Holden and Alesha Dixon and little Louis “you’re like a young Aretha Franklin” Walsh with him, that would be even better. Bon voyage! The Bermuda triangle is that way…..

Our review of the week’s sartorial atrocities begins with a newcomer to these pages, Playmate of the Year 2011 and aspiring actress Claire Sinclair, wearing not very much at all at the premiere of Lovelace. 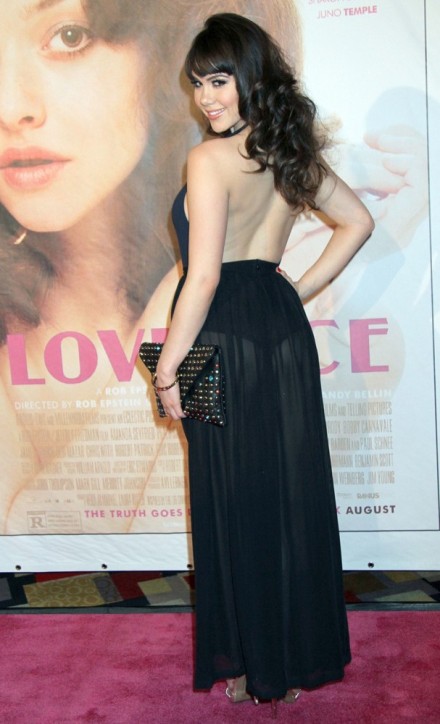 This is a swimsuit with a see through sarong. It would look trashy, and then some, around the pool let alone on the Red Carpet. Admittedly, Claire is no stranger to baring her arse, but even so…..

Next up we have actress Alyssa Milano wearing Stella McCartney at the Young Hollywood Awards. 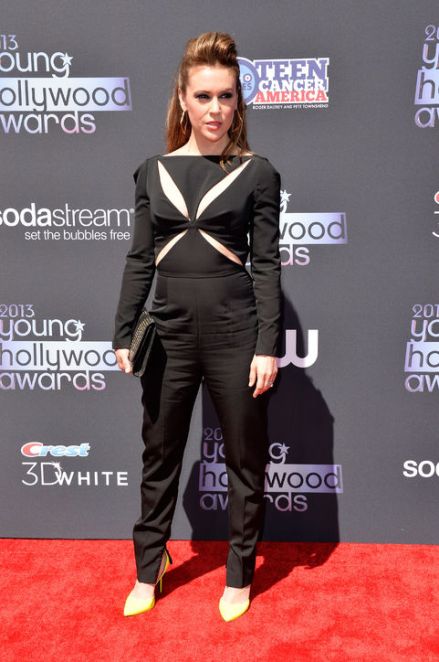 Regular Readers will know that WTF is not a fan of Stella in general and of her penchant for onesies in particular. This creased, peek-a-boo monstrosity does not fit Alyssa around the crotch, the trousers are too long and it features one of WTF’s least favourite fashion innovations, pleated tits. WTF hates pleated tits almost above all things because they are ugly. That is all there is to be said about pleated tits. Meanwhile, WTF is consumed with the urge to colour in those peek-a-boo slits with indelible magic marker…

Our next guest is Cat Deeley at the same awards wearing Etro. 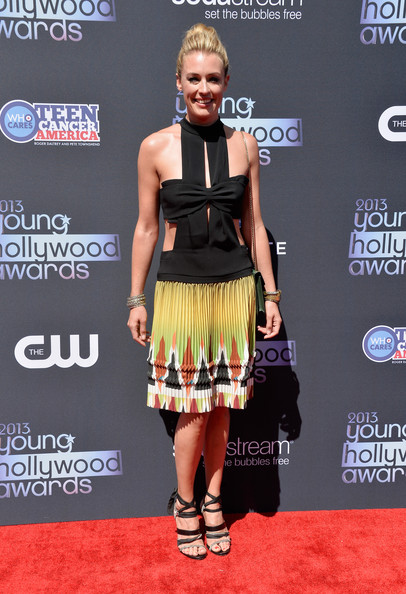 Sadly WTF must report that this is not Cat’s finest hour. Whilst her print skirt is striking, those wrapped-up tits are very low-slung like an elderly dowager in an episode of Downton Abbey (alas, shortly to be foisted upon us again). However the Dowager would be rather more covered up than Cat here which would be wise given that the Abbey seems a little draughty, what with those long corridors and high ceilings and M’Lud’s continuing worries about the cost of everything whilst maintaining a skeleton staff of 50.

Minge moment of the week is back in the form of Australian actress Margot Robbie wearing Ermanno Scervino at the London premiere of her new film About Time .

A lace tablecloth worn over a vest with a fringed muff ruff. Horrible.

Now to the America’s Got Talent Red Carpet Event and one of the judges, Melanie Brown née Scary Spice. 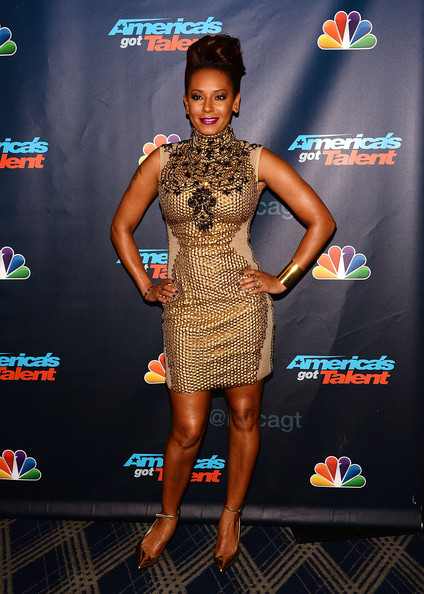 Ah, you can take the girl out of Leeds…. Mel’s head seems to have been superimposed onto this illusion dress although frankly it is more delusion than illusion, the delusion being that tight and tacky and apparently made out of a discarded school serving hatch constitutes classy. Note to Mel – it doesn’t. WTF can only surmise that the designer was inspired by the notion of Nefertiti as a Vegas showgirl.

We now greet Nosferatu himself, Karl Lagerfeld  out shopping in St. Tropez. 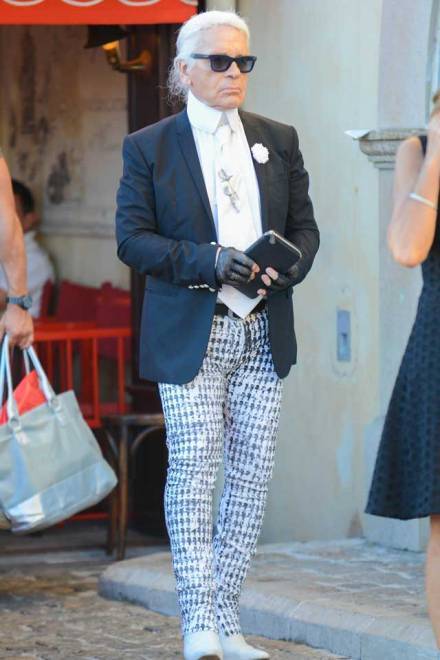 Karl has recently put Princess Caroline of Monaco into a couple of shocking lace nighties and called them couture and it seems that his lost touch now extends to his own wardrobe. Let us pass over the fact that he is rather overdressed for the French Riviera in August. Let us instead pay attention to Karl’s top half, which together with his absurd little ponytail, makes him look for all the world like one of Princess Caroline’s footmen from the Pink Palace at Monte Carlo. That done, let us pass to the chef-style printed jeans which snuggle around his unmentionables, pausing also to take in the pointy white leather booties. Karl – WTF suspects that you must live surrounded by mirrors. Do yourself a favour and look in one of them before you next step out in public. And whilst you are out browsing round the shops, buy some trousers that fit you.

To L.A. and singer-songwriter Bonnie McKee. 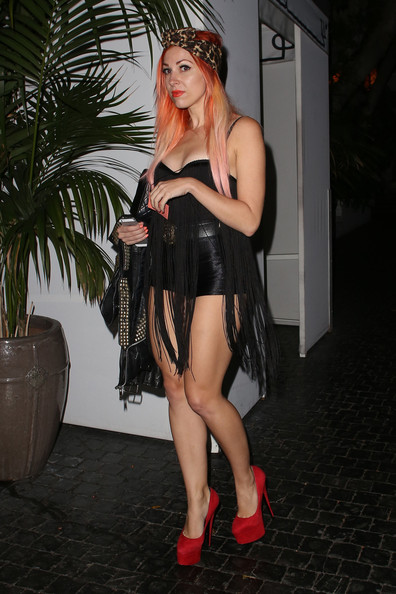 There is more than a touch of WTF regular Courtney Stodden about this ensemble which falls firmly into the category identified sagely by WTF aficionado Sian as “not even clothes”. However Bonnie is 29 years old and therefore old enough to know better. This is a woman who has co-written 8 #1 hits for the likes of Katy Perry and Britney Spears. However none of that excuses this loathsome mishmash of satin, leather, fringing and mega-hideous tarts trotters. As for the horrible hair, it passeth all understanding…..

OK Readers, that’s your lot for this week. Keep the comments coming, which are always well worth reading, follow me on @WTF_EEK and let us meet again next week. Be good x