The Telegraph recently did a cull of its staff on merging with The Sunday Telegraph but sadly for those of us who prefer journalism to be intelligent and well-written, Woods survived the cut to subject her readers to her particular brand of bile-filled bollocks. Written in execrable style, the article took Kate to task for having had a number of “revolving door relationships” and more than one husband. I mean, that must make her a slut, mustn’t it?  Maybe we should just bury her up to her neck and throw stones at her. Alison Boshoff in The Mail was no better. Headlined Why is Kate Winslet’s Love Life Such a Mess? Boshoff concluded, based upon a handful of cuttings and aperçus from “insiders” that Kate’s problem is that “she is a hopeless romantic who loves to be in love and has never outgrown girlish dreams of finding a Mr Absolutely Right”. Who knew that Boshoff had a PhD in psychology? WTF had previously thought that she was just The Mail’s showbiz writer whose job it was to piss all over people in the name of sales.

Neither woman mentioned that Kate was first married at 23 and that her second husband was carrying on with Rebecca Hall which broke up that marriage. Mind you, according to Woods, that was also Kate’s fault because he had previously said that monogamy was an unnatural construct and so she was asking for it.

Happily most readers of both newspapers gave the articles the bird. Even the usual neanderthals who comment in The Mail were outnumbered by those who thought that Boshoff was bitter, nasty and judgmental and that it was none of her business.  Both sets of readers pointed out that Rod Stewart had 8 children by 5 different women but nobody carried on about him having “revolving door relationships.” Twitter also erupted with Zoe Margolis (@girlonetrack) leading the charge and posting a riposte to Woods’ “hateful” article objecting to its misogyny and sexist double standards and she is absolutely right. Neither paper would publish an article like that about a man because in their mind men are put on earth to shag women, but if women shag them back, they’re slags, even if they are actually married to the men they’re shagging.  More to the point, neither paper would ever publish an article like that written by a man because they just wouldn’t dare. What is so insidious is that both Woods and Boshoff have previously written articles about their own marriages (like anybody cares) and so there is a horrible, smug  Kirche, Kinder, Küche aspect to it all – if you don’t have the perfect marriage and the perfect husband (just the one, mind) you’re a slapper.  The demonisation of women by women is distasteful and depressing, not least when they are paid to do it.

Anyway this is, as ever, an equal opportunities wtffashionshark with both men and women getting it in the neck, not for their sexuality or marital status but for the terrible clothes they have conned themselves or been conned into wearing. Let us begin with millionheiress and shoe designer Chloë Green whose father Philip Green owns Topshop and other stuff. 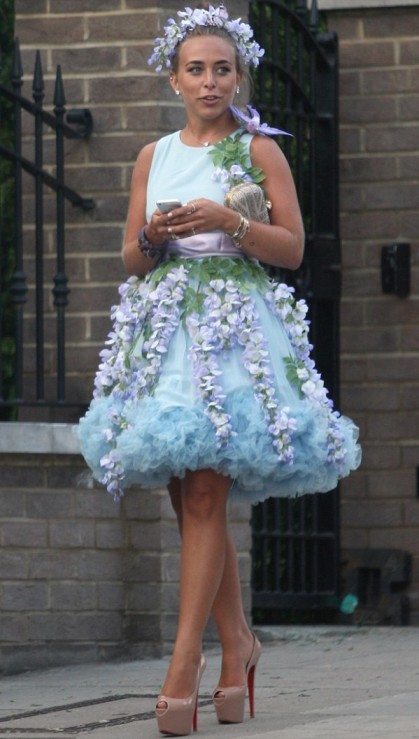 Chloë looks like a fairy in A Midsummer Night’s Dream but was in fact attending a wedding bedecked in more fake flowers than a Broadstairs B&B, a bird on her shoulder like Long John Silver, a Union Jack clutch and hideous  Louboutins. M. Louboutin said recently that he would be mortified if anyone said his shoes looked comfortable. He is no danger of that but should he not be concerned that this pair are like the hooves on a pantomime horse?

Now for a trio of men looking silly at the CFDA Awards, starting with designer Zang Toi in (hopefully) his own design. I say hopefully because were it otherwise, there would be two idiots involved, one designing it and one wearing it.

Next we have fashionista and all-round show-off Cameron Silver in a suit designed by his pal Nicole Miller.

WTF is aghast, especially at the shoes and the wonky bow tie. The whole thing gives Cameron the appearance of a walking bathroom floor.

And now the winner of the CFDA Menswear Designer of the Year, Thom Browne in a suit of his own design and looking like a very hairy, overgrown schoolboy.

Those shorts are absurd but WTF is principally concerned by this ghastly trend for too-short, too-tight jackets which bring to mind the late, lamented Norman Wisdom. 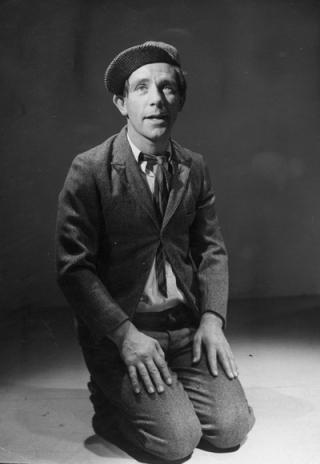 Norman was a cult figure in Albania where dictator Enver Hoxha decreed that his character of Mr Pitkin epitomised the struggles of the proletariat against capitalism. But even the Albanians did not revere Norman for his style. WTF has previously deplored brogues worn with bare ankles and this has not persuaded her to change her mind.

The women wore some shocking outfits as well. Here are 2, both from Givenchy. First we have Adriana Lima. 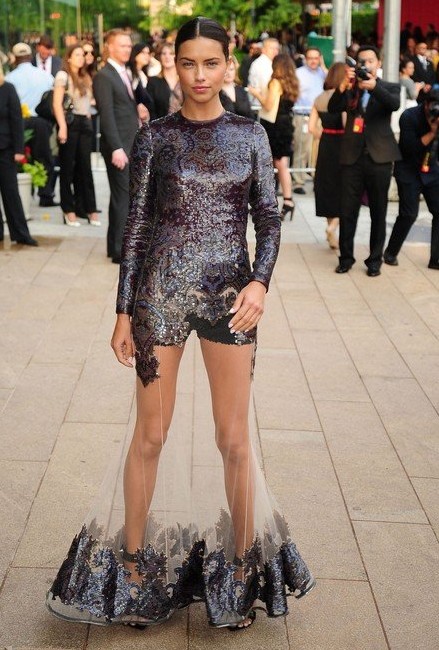 Here is a WTF rule. If  it looks like shit on a supermodel, then it is probably is. Here is another rule. Either wear a proper skirt, or don’t bother.

The long gloves, slippers and skirt would have been bad enough but a lace athletic shirt with the words Favelas 74 on it is plain offensive. Here we have Givenchy flogging overpriced tat printed with the name of Brazilian shanty towns where the combined income of a whole  favela over a lifetime would not buy the garment in question. What next? How about the Dharavi slum in Mumbai or the Killing Fields of Cambodia?

And now for something completely different. We go to the Glamour Awards and pillow-cheeked  Amanda Holden.

Amanda is a Judge on Britain’s Got Talent despite having no discernible talent  but the priapic porkfest that is Simon Cowell, purveyor of junk to the Nation, took a shine to her and Amanda now sits in judgement on small children, preferably disabled, singing songs and adults turning backflips, simpering up a storm and clapping ostentatiously. The dress seems to have been assembled at random, complete with tit sling (a splendid observation from WTF afficionado Enid Shelmardine), arm-armour and genitalia curtains only millimetres away from a full-on minge moment. WTF’s best efforts have failed to discover the identity of the designer who is clearly lying low with his/her mobile turned off and the curtains drawn.

Fortunately for Amanda, she was not the worst-dressed this week thanks to  Mollie King from The Saturdays wearing Louis Heal. 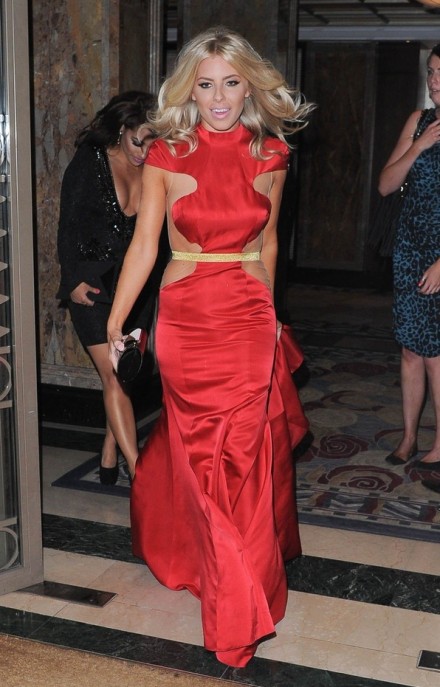 This is a check-list for everything WTF hates in a dress – tawdry, sideboob and peekaboo, a patchwork of cheap satin and nude gauze and what appears to be a gold tape measure worn as a belt. And then there is the back, or rather the absence of one. 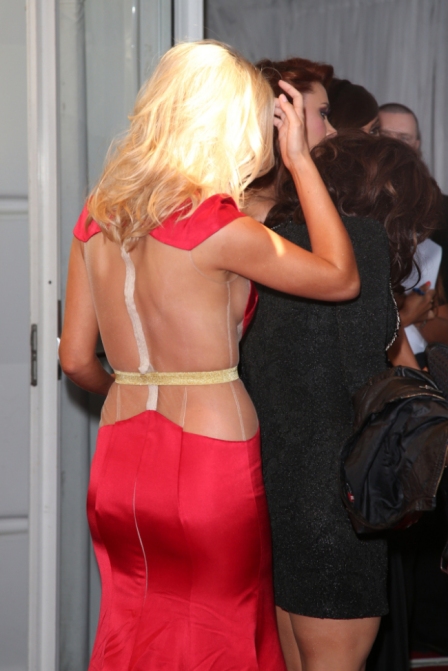 Good grief.  WTF hopes that Mollie was not trying to impress her ex, square-jawed, muscular male model David Gandy who was also there  with his new girlfriend Samantha Barks. If she was, it was a bad decision. By the way, Samantha was described  in various newspapers as David’s “arm candy” although she is a talented actress and singer with her own very successful career. Sigh.

OK Readers, that’s your lot for this week. Excellent comments last week, so them coming, get more random nonsense on @WTF_EEK and we shall meet again next Friday. Be good x