Posted on November 6, 2015 by fashionshark

You may remember the case of Dr Eva Carneiro, the Chelsea FC team doctor sworn at and demoted by manager Jose Mourinho. Her offence? She had the temerity to run onto the pitch to treat Eden Hazard who was prone and manifesting every sign of suffering some catastrophic injury. In fact, he was cheating, trying to run down the clock as his team were already down to 10 men and they were drawing at home to lowly Swansea. As she returned to the bench, Mourinho shouted something rude in Portuguese (which she understood, as she speaks Portuguese). He later pronounced publicly that Carneiro did not understand the game of football and banned her from officiating at matches, confining her to the training ground. Carneiro resigned and m’Learned Friends issued a claim against CFC for constructive  dismissal. Meanwhile the bigwigs of the Football Association, that collection of neanderthals, numbskulls and nobodies in charge of the beautiful game, instigated an enquiry into  Mourinho’s touchline antics, which had been witnessed by millions live on TV.  Did he say “daughter of a whore” or “son of a bitch?” You might have thought that someone would ask Carneiro, given that (i) she was there and (ii) she speaks Portuguese but the FA had other ideas. Instead, it instructed a Portuguese language expert, who looked at a video and concluded that Mourinho had said “son of a bitch” and had not directed it to anyone in particular. No one spoke to Carneiro herself and she only learned that Mourinho had been cleared when she read it in the papers.

It gets better. Heather Rabbatts is the FA’s only female Board member. She voiced disappointment at its handling of the “investigation” and said “I have major concerns over the way in which the disciplinary process has been conducted and the lack of an organisational response to the wider issues raised by this case.”  At which point, two other Board members, 82-year-old life vice-president Ron Barston and 70-year-old law lecturer Richard Tur, the chairman of the Oxford University FA, demanded that the FA should now look into Rabbatt’s comments (under its arcane procedure, only two complaints are needed to prompt an investigation) and one is now underway. In other words, forget the fact that the FA has done FA about Mourinho’s bullying and sexism. Forget the fact that it did FA a year earlier when it “investigated” sexist abuse hurled at Carneiro by West Ham Fans and concluded that there had been none, again without deigning to involve her in their enquiries and despite clear video evidence. Forget a fair hearing. Forget free speech. Forget the fact that it is virtually impossible for a woman to get anywhere in the oh-so-male world of professional football. For these pair of fossils, and probably for the FA itself, the important thing is that Rabbatts undermined the organisation,  even though what she said was right. The irony of investigating a woman for complaining about an inadequate response to a complaint by a woman of sexism never occurred to the old farts running the FA. This, by the way, is the same mindset held by that other bastion of uselessness, UEFA, which is currently investigating Manchester City because its fans booed the Champions’ League Anthem.  Pol Pot would be drooling…..

This week, it emerged that Carneiro was also suing Mourinho personally for sex discrimination and it is to be hoped that she takes him to the cleaners. Her career has been wrecked because of his intemperate, arrogant, sexist behaviour and it has probably contributed to his team’s poor showing this season as they perceive what everyone else has always known, that he is a mean, petulant bully.  WTF is loathe to kick a man when he is down but in Mourinho’s case, it is the duty of all right thinking people to put on their boots and join in with gusto.

We start our visit to the week’s fashion fleapit with a classic example of the Emperor’s New Clothes. I refer to lovely Jennifer Lawrence at the premiere of The Hunger Games – The Moneyspinner Concludes wearing Dior Couture. 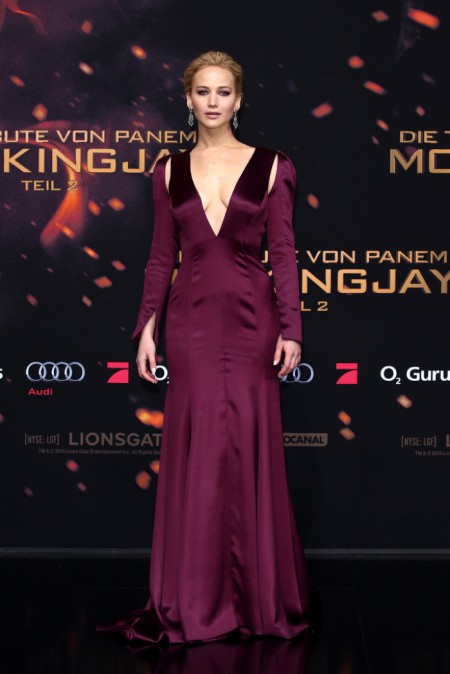 Yes, you read that right. Dior Couture –  ill-fitting, cheap lining fabric and puckered seams. If this is couture, WTF is the tooth fairy.

To the British Academy Britannia Awards and two horrible red dresses, starting with actress Jane Seymour wearing I know not what.

Like a flamenco dancer who has trodden on her frills, necessitating their swift removal before she takes to the stage and gets busy with the castanets…

Also present was former Spice Girl Melanie Brown aka Mel B, again wearing I know not what.

Sigh. Why is this still happening? 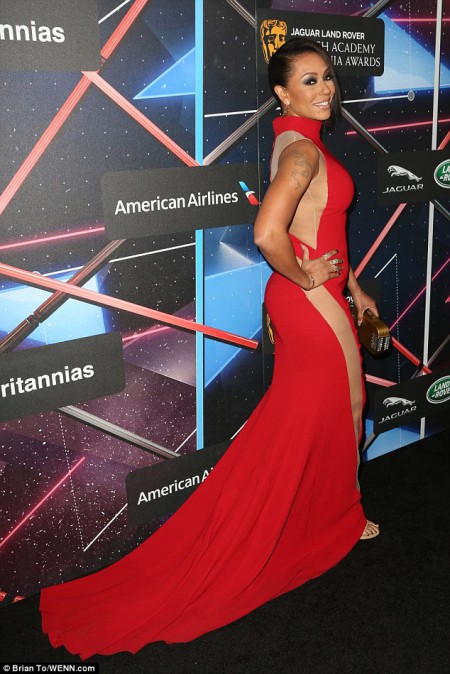 Mel is intent on showing us that she has no knickers on, the sheer panels are both the wrong shade for her skintone and showcase knobbly knees and because she needs to take a size up, the front has more folds than an origami fan. 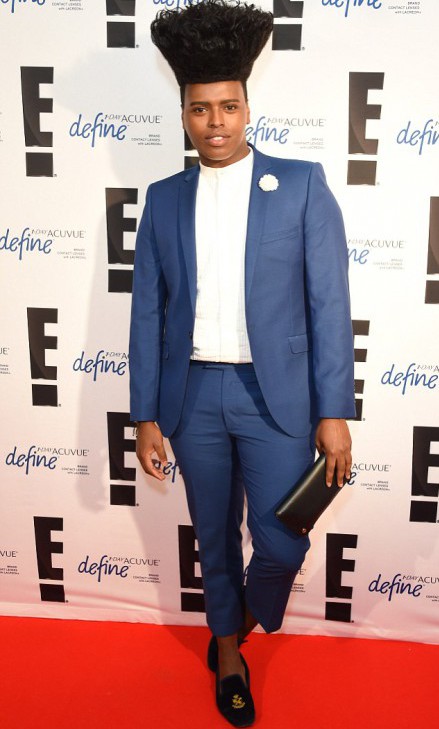 The shirt is fine and jacket is sort of OK but the trousers finish half way up his shins and snuggle far too lovingly into his crotch, like fashion frottage. The main outrage, however, is the hair, which bears a striking resemblance to a priestly biretta. 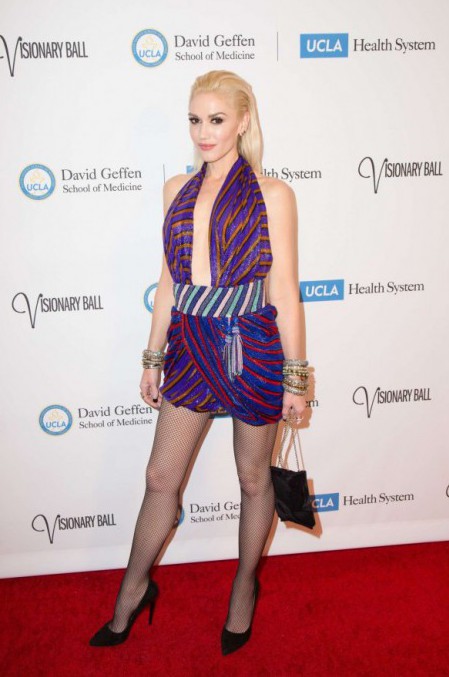 This is more like Reem Acrid, a striped dhoti secured with a curtain tieback and styled with fishnet tights. Did Gandhi wear fishnet tights and carry a £1,100 patent crisp packet handbag? I think not….

Welcome back Nicole Kidman, wearing Prouenza Schouler at the Harper’s Bazaar Women of the Year Awards. 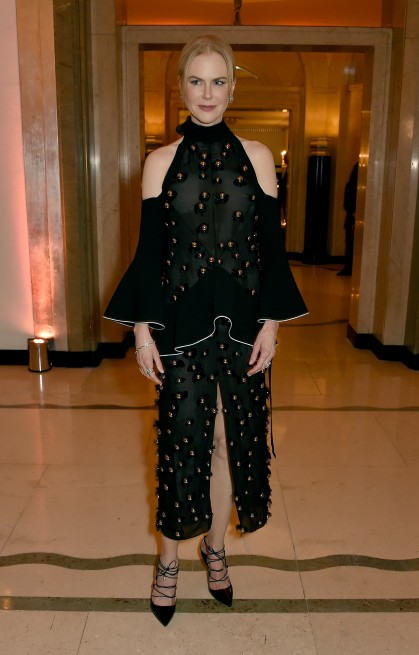 Nicole is clad in a sheer, bell-sleeved straitjacket adorned with spat-out Maltesers. Presumably the wearer is not expected to sit down…

If a barrel of gold bullion went to a pyjama party in sunglasses, this is what it would look like….

Finally, it gives WTF no pleasure to include proper film star Jane Fonda wearing Balmain at the Hollywood Film Awards. Scroll down slowly for this one.

There are photographs in which Jane appears to be wearing a skirt but the horrible reality is that her legs and nether regions are swathed in frilly, tiered Victorian pantaloons. WTF tried to remember when she saw anything as silly and then gave up……

This week’s It‘s Got to Go was brought to WTF’s attention by aficionado @gazaboatconvoy. It is true to say that this is one of the most revolting pieces of revoltingness WTF ever did see in her life. I refer to the Scrote Tote.

YURGLE. Any man going out with a nutsack as a backpack clearly has major problems in the goolies department. More importantly, citizens have the right to go about their lawful business without being confronted with a giant scrotum, not to mention one much nearer to eye level than would normally be the case where two people are both standing up. It has most definitely Got To Go.

OK Readers, that’s your lot for this week. Comments abounded last week so keep them coming and do not stint on your splendid suggestions for It’s Got To Go. Let us meet again next Friday. Be good x