This week, Lino Carbosiero took umbrage at insinuations that he had been made a Member of the British Empire for services to hairdressing in the New Year’s Honours List only because he cuts David Cameron’s hair. The very idea!  Quivering with indignation, Lino said that he has upped the standards of hairdressing throughout the country and made people aware that you can open a salon tomorrow and cut people’s hair. WTF can understand his distress. Heaven knows how many catastrophic comb-overs and bad blow-dries Lino has fended off in the name of the Empire. WTF will sleep sounder in her bed knowing that without him, men and women all over Britain could be looking like a sack of shit from the neck up. Oh, hang on….

WTF has never understood this Honours lark. First, although many Tories and football supporters seem not to have noticed, we no longer have an Empire. Second, why should you get an honour  just for doing your job and a well-paid one at that? I refer to all those luvvies, those civil servants with their copper-bottomed pensions and to Sir Marcus Setchell who was recently knighted for the safe delivery of HRH Baby. Surely an Obstetrician’s job is to ensure the safe delivery of babies, royal and non-royal alike? Does the driver of the 73 bus to Stoke Newington get an award for getting back to the depot without incident? As for the charitable activities, Lino once raised £25K on a sponsored run in 2005 but this hardly makes him unique.

The whole Honours thing is a nonsense with all parties equally culpable, rewarding their donors for filling the coffers or toadying to what they perceive as the public taste (how else can you explain the words “Arise Sir Bruce Forsyth?”) or rewarding arselickers. Caligula may have made his horse a Consul but even he drew the line at pandering to his hairdresser. Let us hope that Dave does not have a back, sack and crack technician or said artisan  will soon be en route to Moss Bros before travelling to the Palace to get his gong for services to depilation.

There were more scandals of the week, this time sartorial. We start with another recent Honouree, Karren Brady CBE (Commander of the British Empire, higher up than Lino) at Thursday’s London premiere of The Wolf of Wall Street. Karren is one of Lord Sugar’s advisors in The Apprentice and  herself a successful businesswoman.

Call Me Dave has been courting Karren to become a Tory MP but he might want to reconsider after seeing this tartfest revealing gargantuan amounts of tit. Karren, love – for the next Apprentice task, send your team out to find you a decent bra.

Let us now go back to Wednesday’s LA premiere of The Wolf of Wall Street and one of its stars, Australian actress Margot Robbie wearing Delpozo. 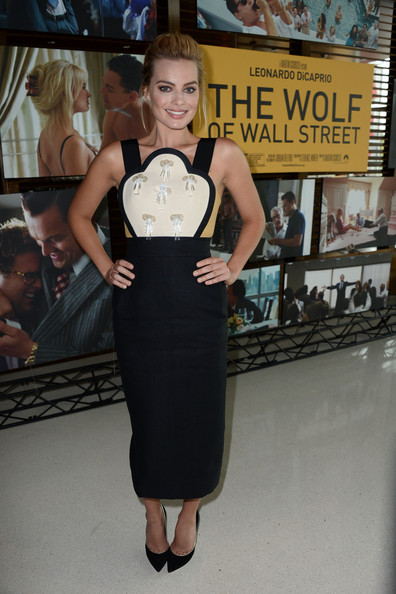 Margot is very pretty but even she cannot carry off what is essentially an apron decorated with a dismantled chandelier. If you plug her in at the mains, will she light up?

Still in LA, we now call in at the Peoples’ Choice Awards 2014 where tits seemed to be the order of the day. This is actress Malin Akerman wearing Cushnie et Ochs.

Is it a tit window? A tit harness? Whatever it is, it is truly terrible. You need to be very flat chested to carry off this look, which manifestly she is not, and it is also too tight over the stomach. Bad. Nearly as bad as Cassie Scerbo in this horror.

Ouch! Those shorts look so tight that WTF suspects Cassie may have had to make an emergency trip to the pharmacy for some Canesten. As for the outfit, she looks like a chorus girl in a low-budget revival of 42nd Street.

This is singer Natasha Bedingfield attending a lunch hosted by Dior. 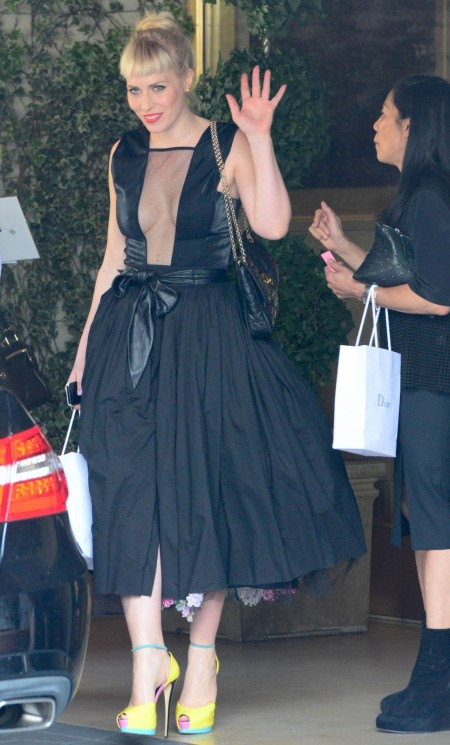 Actually, this is more a case of Natasha being out to lunch. There is too much décolletage on display and whilst it is likely that none of the attendees were big eaters, Natasha would have put them off their lightly grilled radicchio leaves. The terrible floral petticoat and fuck-me shoes add to the ghastliness and the  skirt is so large that WTF is worried that Natasha might have been smuggling out some more Dior-stuffed goodie bags for her friends and relations.

Back in the UK, we turn to Dappy né Costadinos Contostavlos, former lead singer of the Grime/Hip-Hop band N-Dubz. He wore this hideous Versace outfit to enter the Celebrity Big Brother House.

OK there is no nice way of saying this. He looks like a knob. Rapper 2Chainz also looked ridiculous when he wore the same outfit at the 2013 Grammys but Dappy looks still worse because he is pasty and lanky whilst his bum fluff and protruding tongue give him the air of a village idiot. WTF is unable to understand either the Henry V haircut or the fact that Dappy’s belt is at groin level rather than worn around the waist, as is the usual practice.

It’s time for this week’s It’s Got To Go. As far as WTF was concerned, there were only two candidates – football “pundit” Martin Allen and his revolting Hackett of London waistcoat. 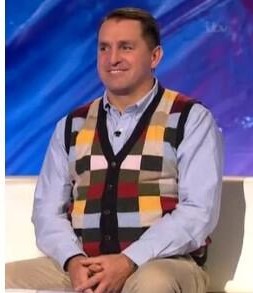 Allen, known for some reason as “Mad Dog”, was chosen by ITV as a pundit on its piss-poor FA Cup Highlights show on 2 January. Viewers did not know what was worse – the sound of the barrel being scraped or the sight of this horrific knitwear straining over  Allen’s portly person. Twitter exploded with contributors divided over whether Allen had worn this for a bet or whether he was humouring his elderly nan who had knitted it for Christmas but in fact he later admitted to buying it for £90 in the Boxing Day Sales.  Meanwhile, a crap player and crappier manager who refers to the manager of mighty Manchester City as “Pellegrini or whatever his name is” has no place as a pundit, even on ITV. Both he and his waistcoat have got to go.

Chelsee is at liberty to make her breasts either larger or smaller as the mood takes her, this being a matter between her and her bank manager. However, her breasts, or for that matter her thighs, should not be hanging out of either end of an oversized blazer. Indeed, the last time WTF saw thighs like that they were on Sir Chris Hoy and they looked better on him. As for the open-laced, peep-toe boots, they are as bad as any boots WTF has ever laid eyes upon. Ever.

We now have a pair of “fun-fur” coats from the Prada S/S 2014 collection. First Marc Jacobs wearing his in St Barts whilst walking Neville the dog.

WTF is sorry to observe that Neville looks far better than Marc. In fact the poop-scoop bag looks better than Marc who is giving a good impression of one of those puppets off Sesame Street.

St Barts  is supposed to be warm at this time of year, is it not, so why is he wearing a coat at all? It is certainly freezing cold in New York where Anna Wintour wore her Prada coat to the screening of Season 3 of Girls, but this one is, if anything, even sillier than Marc’s.

This woman is the editor of Vogue for Heaven’s sake. And she is all hunched up with her neck stuck out like a tortoise. She is about as edgy as the Teddy Bears’ Picnic, especially with that hair-helmet she always sports. Still, it must have been  a nice change for Lena Dunham not to have been the worst dressed person in the room….

OK Readers, that’s your lot for this week. Keep the comments coming as well as your suggestions for It’s Got To Go and we shall meet again next Friday. Be good x