WTF’s late mother’s favourite song was Bob Hope singing Thanks for the Memory. This week The Sun played Thanks for the Mammaries, purporting to withdraw its fabled Page 3 featuring bare-breasted bimbos. But just like the spider you push down the plughole, only for its hairy little legs to reappear shortly thereafter, Thursday’s edition featured Nicole from Bournemouth flashing her nipples with the paper triumphant at having put one over on the hairy-armpitted, Guardianista feminists who threatened the right of the ordinary working chap to perve up over Chardonnay from Chesterfield as he sips his breakfast tea from a Union Jack Mug.

The demise of Page 3 was mooted a year ago, as WTF noted at the time, with ancient sleazebag Rupert Murdoch letting it be known that, like Rupert himself, it might have had its day. Not according to glamour model Rhian Sugden, 28, who this week branded critics of Page 3 as “comfy shoe-wearing, no bra-wearing, man-haters” and suggested that it was “only a matter of time” before “such people” dictated everything we did. Rhian told us that she had been “empowered” by baring her breasts and, advancing the cause of emancipation and an end to gender stereotyping, that other women would suffer, including those who did the models’ hair and makeup. Some pompous git in The Daily Telegraph also attacked the feminist harpies opposed to Page 3, arguing that it was simply a part of the venerable British tradition of “smut”. To which WTF replies that traditions can be good or bad. Dancing round the Maypole – good. Benny Hill – bad. Roast Beef and Yorkshire Pudding – good. Objectifying women – bad. Let us hope that a woman’s nipples soon cease to constitute content for a national newspaper – and let us extend that hope to the Daily Mail Side Panel of Shame whilst we’re at it. A  woman is more than her breasts. No Thanks for the Mammaries…..

To the week’s clothing cloaca. The Critics’ Choice Awards came too late for last week’s blog so let us briefly look at a couple of stinkers, starting with actress Nina Dobrev wearing Zuhair Murad. 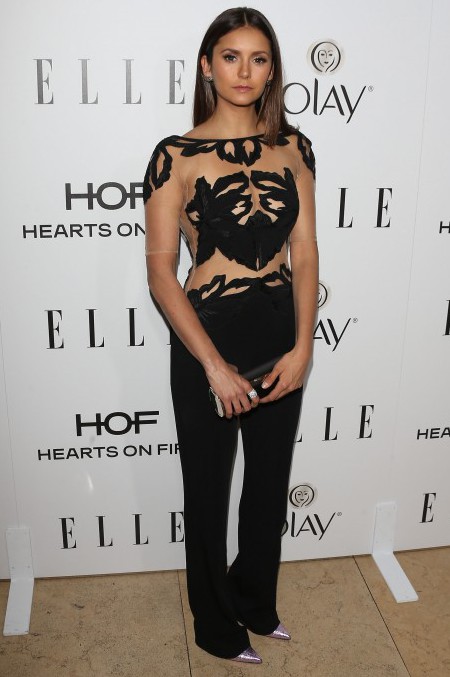 She has a picture of Che Guevara on her chest and those chiffon short sleeves are just creepy. Does Zuhair Murad ever design something without vast expanses of flesh?

There has been a lot of this hands-fr0m-behind-groping-the-tits look, which WTF just cannot abide whilst the chequered fabric, like Escher on acid, is making her feel quite queasy.

Next we encounter former singer and Reality Show “star”, Christina Milian, out and about in LA wearing half a dress and D&G lace boots. Yes – they’re boots. 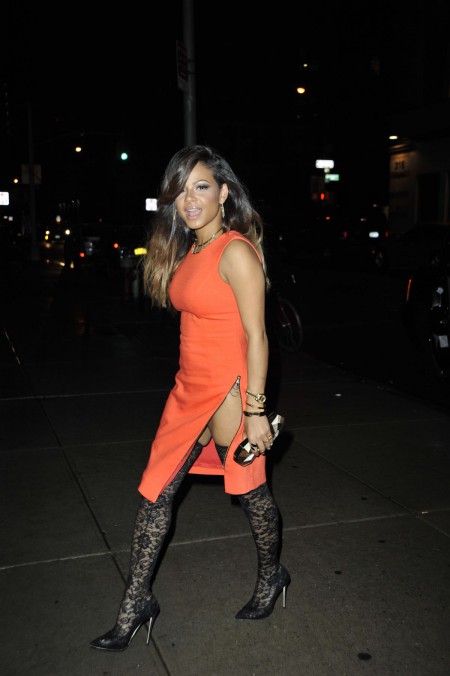 The orange dress with waist-high zip inviting the inevitable Minge Moment is bad enough, Heaven knows, but WTF’s ire is chiefly directed at the lace boots, which have ventured well beyond horrible and are now out of sight somewhere in Lunacy Land. See how they bite into Christina’s thighs! Marvel at the twisted seams! Gasp at the price ($2,000)! Despair at those mad enough to buy this tat!

To the National Television Awards in London where there was horror in abundance. It was about 2 degrees on Wednesday night so this lot must now have advanced frostbite. We start with Sam Faiers, formerly off TOWIE, wearing Leeds designers AQ/AQ. 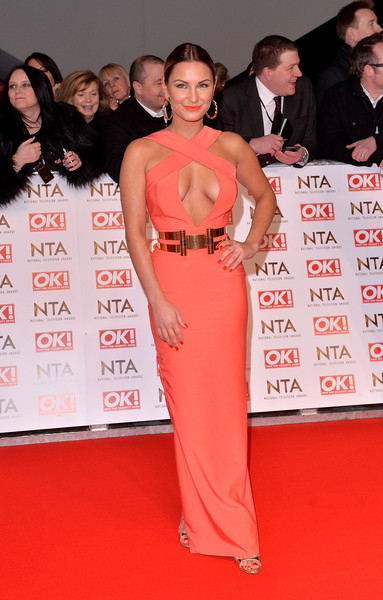 This is more No IQ than AQ/AQ. Surely it was unwise for Sam, already as orange as an orange, to wear an orange dress and orange lipstick and to hang her uneven, orange fake tits out of an orange tit window. The whole effect is that of a perambulating carrot.

Chloe has been shrink-wrapped into £346 worth of latex, so tight that it took her three goes to get into it with a goodly application of talcum powder. How she managed to get it off again does not bear thinking about…

And lastly from the TOWIE contingent were Tommy Mallett and Mario Falcone. 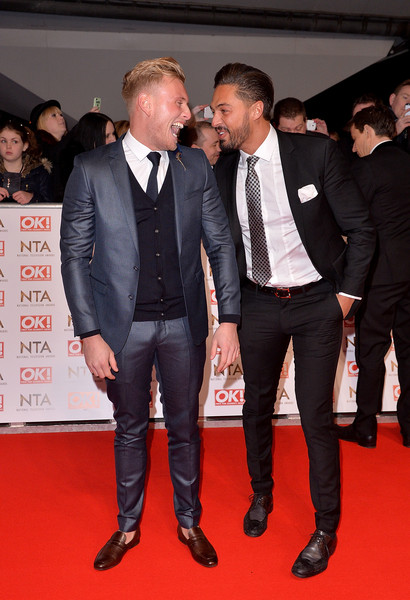 Bearded Mario looks acceptable although the trousers are a bit skinny for WTF’s taste and his shoes need a polish. But Tommy! His suit is shinier than a glitter ball and so tight that we can see his cock-cleavage and he has compounded the felony by wearing it with a knitted waistcoat and brown shoes with bare orange feet.

Then there was actress and Professional Scouser Claire Sweeney, her skin the colour of a pumpkin and wearing  a most unflattering dress. 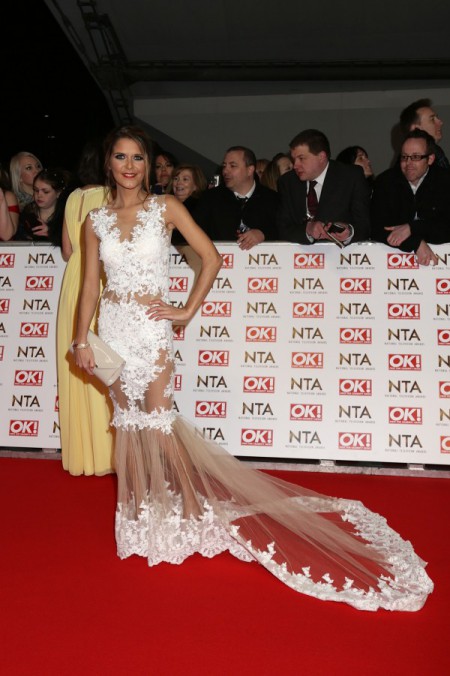 This is more April Fool than April Banbury. Beyoncé wore a version of this at the 2014 Grammys designed by consummate Minge Moment Maestro, Michael Costello. It stank but at least it was beautifully made, unlike these especially grubby net curtains from a Bridlington B&B, inexplicably bound at the knees.

This is more Oh No than Ono. First, this is a black body covered in an off-cut of lace WITH LEATHER FRILLED CUFFS! Second, her white tits are exposed, as is her right nipple. She should be holding that clutch over the chest or using it to assault the designer and the stylist….

Why is she dressed as Borat? 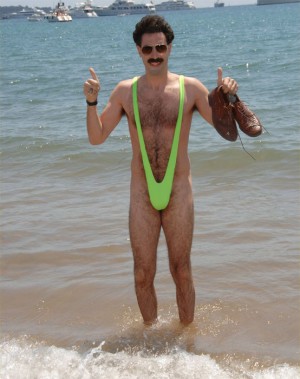 His shoes are bad but at least they don’t cost $2,165. WTF aficionado Debbie complained that she did not know whether she was looking at tats or pubes (they’re tats, but you can see her point). WTF is also struck by Amber’s cross-body gold chain, which seems to be a misguided attempt to appear to be wearing something.

This week’s It’s Got To Go concerns selfie sticks. Is it not bad enough that stupid, self-obsessed people post pictures of their taut tummies and pillow-lipped pouts? No, apparently, because now you can hold your iPhone up high for a better angle of your abs or, perhaps, show your pals a sliver of scenic background. WTF would like to shove those sticks where the sun don’t shine – very slowly.

OK Readers, that’s your lot for this week. Keep your comments coming in (they have been a trifle sparse recently, just saying) and your suggestions for    It’s Got To Go and let us meet again next week. Be good x