Posted on November 7, 2013 by fashionshark

Those of a certain age will be familiar with the British seaside phenomenon of the Punch and Judy Show in which Mr Punch and his wife Judy assaulted each other and Mr Punch wiped out loads of people whilst emitting the cry “That’s the way to do it”.  Here are the happy couple … 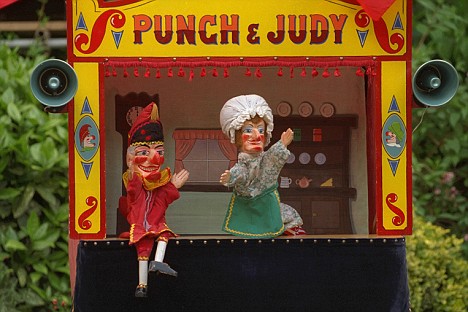 WTF tuned into Prime Minister’s Question Time this week and it was like going back to her youth. MPs are supposed to ask the PM a question and s/he is supposed to answer it. Not now. Tony Blair started the rot when he was PM and now things are truly rotten.

There are 3 species of “questions”. There are the questions posed by  arselicking Government backbenchers, reading laboriously from a script penned for them by Tory Central Office. These are along the lines of “Does the Prime Minister agree that this Government is getting it absolutely right by [fill in as appropriate] and if the other lot were back in then they would fuck it up completely?”. Unsurprisingly Call Me Dave agrees enthusiastically and then trots out some rehearsed soundbites to the effect that Little Ed Miliband would be the greatest disaster to hit the country since the Great Plague. Then there are the questions from Opposition or Independent MPs when Call Me Dave does not know what the questions will be. However, this does not matter because he does not answer them. Instead he repeats the same soundbites (or a variation thereof), only this time much louder because he is getting the bird from the Opposition benches. And finally Little Ed “asks” Call Me Dave a series of questions, also in soundbites. Call Me Dave does not answer these questions either but utters imprecations directed at Little Ed whilst his face grows ever more purple.  Little Ed comes back with an unspontaneous rebuttal. “The Honourable Gentleman’s Minister of State said only last Thursday….. May I remind the Honourable Gentlemen that in 2003, he said that…” etc. Both sets of backbenchers are now yelling their head off in a manner which would disgust the most rabid set of drunken football fans faced with their bitterest rivals at the train station. There is a great deal of pointing. Honourable Members rise to their feet shouting “worra, worra, worra” like Tigger. It is at this stage that onlookers wonder whether things were not better arranged in Pol Pot’s Cambodia…

This farrago  is presided over by the malignant homunculus that is Mr Speaker, John Bercow. On this point at least the whole House is united. They all hate him. However, his obvious distaste for Tories in general (although he is one) and Call Me Dave in particular is made obvious through a series of sneering putdowns and digs that would have got his lights punched out were they back behind the bike sheds at school. Mr Speaker makes repeated calls for calm. They are ignored. This goes on for half an hour every Wednesday.

There is a bumper edition of horror this week. Even WTF was stunned. Those of a delicate nature might want to log off once we get to the trio of Minge Moments, or at least have the smelling salts handy. Let us kick off with Australian model and former Miss World, Jennifer Hawkins.

That thing on her head looks like a cross between Hermes’ winged helmet and a fish’s arse and either she has had a fake tanning disaster or she has been kneeling in a vat of talcum powder. However, the real question is who goes to the Races in a black leather zip-up dress?  In Australia? This is the second such dress we have seen in recent weeks. Why has everyone decided to dress up as titsy versions of the X-Men?

Meet drop-dead-handsome model Tyson Beckford at some event or other in NYC.

Well this is jolly. It is however hard to take a man seriously when he is wearing  migraine-inducing,  neon-pink trewsies and the fact that he has matched them with a strobe-fest jacket and preposterous studded loafers does not improve the situation one bit.

To the Harper’s Bazaar Women of the Year Awards starting with Mollie King from the Saturdays wearing Gucci.

Here is WTF’s problem with this dress. It is ugly and the addition of some peekaboo tittery does not save it from ugliness, it just makes it even uglier. WTF was most struck by Mollie’s hairdo which makes her look like the woman who drove Inspector Foyle round Hastings in Foyles’ War.

Next up is Jodie Kidd wearing Tom Ford. Which is surprising because Tom Ford and his clothes are the epitome of elegance.

WTF hated this dress even before she realised that it was partially transparent. The shape of the shoulders and the kaleidoscopic pattern make Jodie look like a cross-dressing American footballer on a bad acid trip.

Strangely enough, WTF is less offended by the transparent bra and much more offended by the culottes which transform Naomie into an ultra-swirly gaucho consumed by the flames of Hell. This outfit falls squarely into the category of “why would  anybody wear this?”

This is model and actress Amber Valletta wearing yet another Gucci stinker at the Art + Film Gala in NYC.

Gucci is having a nightmare this week and this combination of creased slithery satin, peek-a-boob and feathers is positively nasty. The top looks like there has been a fatal fight in an aviary and the trousers achieve the remarkable feat of making Amber look fat. Just. Utterly. Shocking.

We now come to face a trio of minge moments and WTF is in uproar about all of them. The first is courtesy of Nicole Richie wearing Dolce & Gabbana. 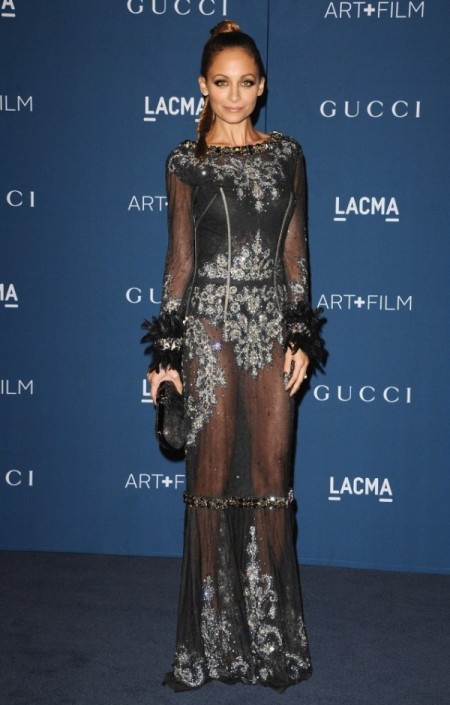 WTF does not like the groin garland (which seems to have shifted somewhat off-centre) or those little legs under the near-obligatory transparent skirt. And this is a shame because the dress would have been lovely had it been lined.

Carrie Underwood wearing Ralph & Russo at the CMAs would have been Minge Moment of the Week had Jaimie Alexander not pipped her to the post.

This is just offensive, particularly those little dangly floral things.  But Carrie is as wrapped up as a over-wrapped wrapped thing in comparison to the horror that is Jaimie Alexander at the Thor première wearing Azzaro Couture. 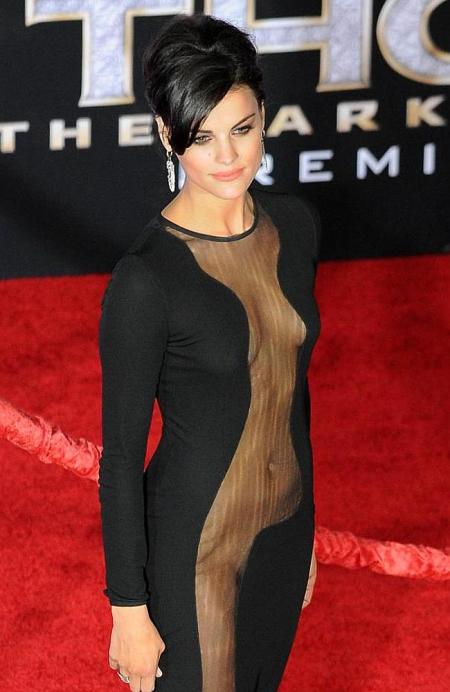 All together now….AAAAAAAAAAAAAAAAAAAAAAAARGH! WTF is hardened to minge. She coined the term “Minge Moment”. But this has flown beyond Minge Moment and landed on Planet Mega Minge. And here, literally, is the rear view.

Look, here’s the thing. Last week WTF wrote about women objectifying themselves and now we have Jaimie showing us her waxed pubic area and her bare bottom on the Red Carpet of a blockbuster movie premiere. Jaimie may have induced masturbatory inclinations in chaps various but the sad truth is that she looks like a fame-seeking strumpet desperate to get her picture in the papers. If that was the aim then it worked but she has done women a massive disservice in the process.

OK Readers, That’s your lot for this week and frankly you are probably grateful for it. Off you go and let us meet Friday. If you wish to post a comment, you know that it will make WTF nearly as happy as when Aaron Ramsey’s goal hit the back of Dortmund’s goal…. be good x