Those of you who are regular visitors to this blog or who follow WTF on  Twitter (what do you mean you don’t do Twitter? @WTF_EEK) will have guessed that WTF was not prostrate with grief at the demise of Lady Thatcher. Although she was obviously a brilliant woman with astonishing presence and formidable debating skills, WTF is old enough to have lived through Thatcherism and  the destruction of the miners, the decimation of the unions, the demonisation of gays, the depiction of Nelson Mandela as a “terrorist” and the cultivation of the elbows-out, greed-is-good, me-me-me, fuck-you culture of the 1980’s and she hated it. Nor does she buy into the mythology that Lady T’s remarkable achievement of becoming the first female Prime Minister blazed a trail for women.  That said, WTF is not one for dancing on people’s graves and so she was all bristling disapproval at the exultant juvenilia that burst out within minutes of  the announcement. Of course, those who loathed everything Lady T stood for were entitled to toast her passing, not least those from former mining communities or whose relatives had been smeared as having pissed on the Hillsborough dead. But dancing round Brixton or Glasgow swigging champagne is another thing entirely and when the likes of Johnny Rotten, Billy Bragg and Martin McGuinness all think something is going too far, then the chances are that it probably is.

On the other hand, Call me Dave has quite lost his marbles in trying to create a degree of mass mourning that would embarrass North Korea. Did Dave not appreciate that spending £10m on a quasi-State funeral, featuring such luminaries as Joan Collins, Jeremy Clarkson and Dame Shirley Bassey, would not be universally popular? Did he not think that calling MPs back from their sunbeds for the obsequies and recompensing them thousands in public funds for doing so would not be well received? (Anyway, why aren’t they already back at work? Every other bugger is). Did he not think that ordering civil servants and diplomats to wear funereal black next Wednesday was a bit OTT? Was there any sight as nauseating as the ghastly old fossils who had knifed her 23 years ago now standing up in Parliament and praising her to the skies? Or any sight as glorious  as pompous Tory windbag Sir Tony Baldry MP (knighted, no doubt, for services to arselicking) being squashed flat by the Speaker when he rose to protest that Glenda Jackson was being rude about the sainted Lady T? What did he think she was going to do? Recite Christina Rosetti’s Remember Me When I am Gone Away?

So on Wednesday 17 April, WTF will be staying indoors. She won’t be dancing in the street and frightening the horses. She won’t be throwing flowers at the gun-carriage and wailing like a banshee.  She will however be enjoying the splenetic fury of the Daily Mail and The Daily Telegraph which have failed to grasp that somehow the Nation is bearing up. The Mail excelled itself this week with a story about Romany Blyth, a teacher for special needs students (anathema) who compared Lady T to Hitler (double anathema) and called for street parties (triple anathema) and for people to piss on Lady T’s grave (Call the Firing Squad). Romany, squealed the Mail, had breast implants on the NHS because of poor self esteem!!!!! WTF is unable to see what this had to do with the price of fish but there we are. Paul Dacre has clearly gone more bonkers than Dave and doubtless a cardiac surgeon and an expert in hypertension are on permanent stand-by in the gilded lobby at Mail HQ in the event that he has a seizure.

Let us distract ourselves with some badly dressed people, starting with Z list singer and celebritee, Aubrey O’Day.

Aubrey was a member of a girl group  Danity Kane (no, me neither) but she was chucked out  in 2008 and now earns a living in the traditional celebritee way, namely baring all for Playboy, appearing in shite TV reality shows and singing the odd tune. Here is she flashing the flesh in Las Vegas dressed as a St. Trinian’s slapper. The silver belt resembles a medieval implement of torture although it cannot be nearly as painful as the cheesewire crotch-skimming leotard. If there isn’t a law against wearing this in public, then there should be.

Now we turn to Little Mix’s Leigh-Anne Pinnock wearing the most appalling trousers WTF ever did see in her life. Well, I say trousers……. 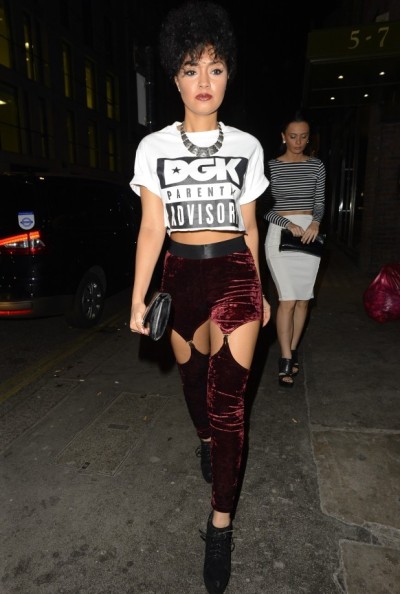 First we have Aubrey in her suspender-leotard and now we have Leigh-Anne in her crushed velvet suspender-trousers. What is the point of suspender-trousers? They do not keep your legs warm and they look stupid but at least Leigh-Anne has the thighs for them. WTF fears that in keeping with the governing rule of British street fashion, namely the fatter the leg the shorter the skirt, wobbling fatties will soon come tottering down the High Street  of a Saturday night with flesh spilling out of their suspender-trousers like little hippos peering from a watering hole. As for the tee-shirt babbling on about parental guidance…. where were Leigh-Anne’s parents to talk her out of this ghastliness?

This is not so much Fall 2o13 as Fail 2013 with its cornucopia of patterns, shapes and fabrics.  There is the white thing across the shoulder-blades like the hood on an academic gown – think watching an episode of Lewis on psychedelic drugs. There are the very swirly tits – think Katie Price’s bikini top. There is the slimy green/blue mermaid fabric and the horrible little frilled skirt and the pattern around the minge department. In fact, the whole thing is deeply disturbing.  Just say no.

Here is The Cars’ Ric Ocasek, pictured with wife of 24 years, actress and model Paulina Porizkova, at a bash in NYC.

WTF likes the way that Ric and Paulina have colour-coordinated their ensembles and thinks that Paulina looks lovely and much younger than 48, which she is. WTF also likes the way that Ric, 64, looks like Bill Wyman’s bookworm Auntie. She is, however, less keen on the colour-swirly jacket with the Aboriginal fish print which is giving her a headache. We can but be grateful that Julianne Hough was not there because had she, Rick and Paulina all stood together, opthalmic departments all over Manhattan would have been crammed with citizens suffering from retinal damage.

Off we go to the Academy of Country Music Awards where we shall examine a couple of complete disasters. First off, we have singer Rae Lynn. 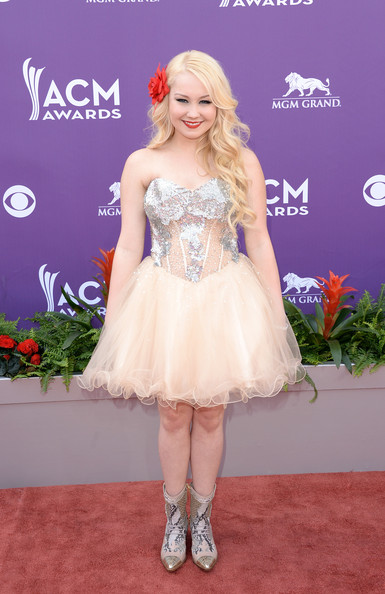 Rae Lynn is 19 years old so why she is dressed as a paedophile’s wet dream, WTF cannot say. The frock is deeply offensive, a frou-frou of peachy froth and silver thread, but to team it with matching Hallo-y’all-I-live-at-Southfork booties is beyond all comprehension.

But bad as that was, this is worse. Meet Tobi Lee from Mustang Sally. 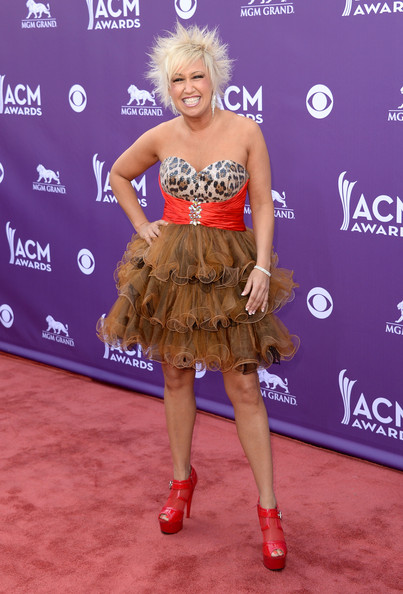 This is just so wrong on every level. WTF has seen some stinkeroonies in her time but this doesn’t just take the biscuit, this is the whole McVitie’s factory working on overtime. Tobi is wearing a leopard-skin bodice and  a tutu the colour of shit worn with a red bejewelled over-bodice and red platform booties. Why? Why design it? Why buy it? Why wear it? As for the hair, someone should have warned the poor girl not to touch an electric socket with wet hands…. Note to Tobi –  you are either colour blind or you are taking the piss, but either way, stop it please.

OK Readers, that’s your lot for this week. There was a bumper crop of comments last week, which made WTF’s heart sing. Keep them coming this week and let us meet again next week. Have fun and be good x