In 1942, William Beveridge produced a report entitled Social Insurance and Allied Services (known as the Beveridge Report). His report proposed that all people of working age should pay a weekly national insurance contribution and in return, benefits would be paid to people who were sick, unemployed, retired or widowed. Beveridge argued that this system would provide a minimum standard of living “below which no one should be allowed to fall” and identified  the five ‘Giant Evils’ of Want, Disease, Ignorance, Squalor and Idleness which the Government should find ways to combat.  After the war and the election of a Labour Government, the Welfare State was born and in 1946 Beveridge became the first Baron Beveridge. Move forward to 2013 and the conviction for manslaughter of six children in Derby by Mick and Mairead Philpott and their friend Paul Mosley. They set fire to  the Philpotts’ house to frame Mick’s former mistress Lisa who had had the temerity to remove herself and her children from the unsavoury ménage à quatorze  that was her, Mick, their five kids, Mairead, her son and Mairead and Mick’s five kids. Mick was not a man to take either rejection or the loss of benefits consequent upon the removal of his and Lisa’s kids. The plan all went horribly wrong and the children died rather than being heroically rescued. So far, so awful and the scum have now been locked up. Enter the Daily Mail which decided to use the occasion to blame the deaths of the six children on the Welfare State with the headline “Vile Product of Welfare UK”. The logic, if that is the right word, which it isn’t, was that had Mick not been a scrounger living off benefits, the children would not have died. Welfare benefits were certainly a factor here but Mick was also a violent, controlling, publicity-seeking sociopath with a previous conviction for the attempted murder of a girlfriend who had ended their relationship.  On the Daily Mail’s logic, the fact that Stephen Seddon murdered his parents for their money makes him a product of a system of inherited wealth and anyone due to inherit money from their parents is a potential murderer. But then the Daily Mail  never knowingly lets the facts get in the way of a good headline, particularly in the same week that Chancellor George “We’re All In it Together” Osborne and Secretary for Work and Pensions Iain “I can live on £53 a week, no problem” Duncan Smith cut benefits and legal aid. There was an outcry against the Daily Mail’s headline and the Chancellor then weighed in as well, and today the paper, full of injured innocence, splashed the headline that it had only been making “the perfectly reasonable point” that Mick was a product of the benefits system and invited a readers’ debate, adding “But beware, the Left WILL hijack the result”.  So there we have it. Beveridge has blood on his hands. Soon the Daily Mail will be calling for him to be stripped  posthumously of his peerage. Meanwhile, those who chose to celebrate Mick as a bit of a one on the Jeremy Kyle Show, TV documentaries and countless newspaper profiles “he lives with two birds and goes dogging and  has loads of kids, get in!!!!” might wish to consider to whom they give what Mrs Thatcher used to call the oxygen of publicity. Oh, and don’t bother wasting the price of a postage stamp writing to the Press Complaints Commission because the Chairman is Paul Dacre, Editor in Chief of the Daily Mail. Small world, isn’t it?

Let us cheer ourselves up a bit with a look at the sheer silliness of over-exposed, badly-dressed people who parade themselves for the public delectation and pay stylists a fortune to look like a sack of shit. Heaven knows we need some cheer in our snow-bound, miserable  April lives. Let us start with actress and O.C. star Mischa Barton wearing Katherine Kidd. 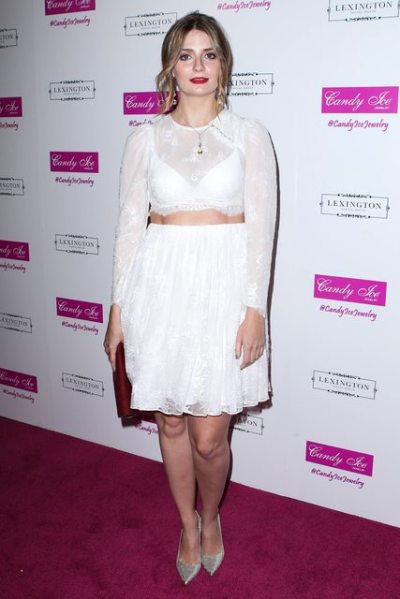 WTF did not realise that a young Mischa was in The Sixth Sense, but then she (WTF, that is) had her eyes shut for much of it. Mischa’s abs are absolutely fabulous and the shoes are pretty but the outfit is a dud, a quasi-bridal combo rendered from an old net curtain with her bra on show. $1,000 down the toilet with loud gurgling noises. Whoosh, whoosh, whoosh…..

Here is the gorgeous Robert Downey Jnr. looking rather less than gorgeous in  Ferragamo. 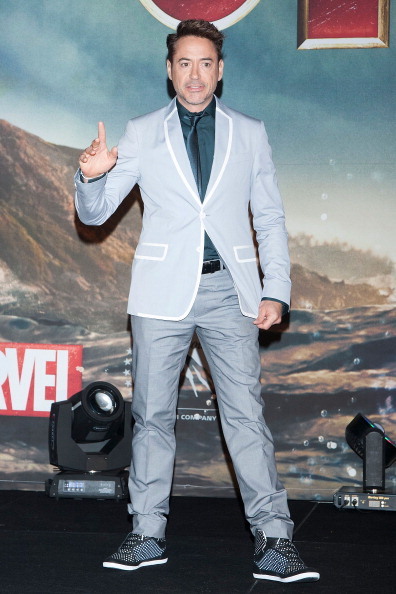 Robert was in Seoul for the launch of his new movie Iron Man 3. Have we not suffered enough? Not to put too fine a point on it, Robert looks like an  ageing bellhop in overlong trousers and spiked trainers and he has also done something very facetious to his hair. He looks silly. And he knows it.

I know, I know….it’s bad. She looks like a Madame of a brothel in one of those Westerns where Clint Eastwood rides into town with a scowl and a hard-on. Adrienne, who is very foxy for 51, is going out with Sean Stewart, 32, son of Rod Stewart, 68. Luckily for Sean, she is way too old for Rod whose third wife, Penny, is nine years younger than her putative daughter-in-law.

Do not adjust your set. This is Kim Kardashian wearing Lanvin.

Look, here’s the thing. Just because it is Lanvin does not mean that it is nice. Ask Sigourney Weaver in her infamous black pillow dress which was, in essence, $2000 worth of dreck turned back to front with disastrous effect. Even if Kim were not pregnant with an enormous chest and an extremely large bottom, this would still look like a crocheted lampshade.

In fact, on reflection Kim would be better off wearing the lampshade, and she would also have saved herself some money, given that the dress is retailing for $3,000. And now a few words about Kim’s pregnancy. First, women get bigger when they are pregnant. This is because there is a baby in there and amniotic fluid, or in Kim’s case, idiotic fluid and the hormones are going mental. So both Kim and the press had better come to terms with this growing girth thing because there are four months left before baby Kimye has his or her first photo-call. Second, just because you are pregnant does not mean that you have to squeeze yourself into tight leather displaying every anatomical detail but equally it does not mean that you have to dress as a crocheted lampshade. Third, and this is only a guess I grant you,  if Kanye is still choosing Kim’s outfits, she must have done something really bad to piss him off.

We now meet singer and actress Kelly Chen wearing Stella McCartney at the opening of the new Sergio Rossi boutique in Hong Kong.

WTF is no great fan of Stella at the best of times, and these are not the best of times. Kelly is wearing see-through lace trousers, although onlookers have been spared an imminent minge moment by the ugly black lining. What WTF wants to know is what is the point of wearing see-through trousers? See- through trousers are about as much use as a chocolate teapot and not as tasty, not to mention very draughty around the nether regions. This ghastly see-through trousers trend is going to be as ghastly as the ghastly see-through skirt trend, and one can but hope that it stops very soon because it is ghastly. The Sergio Rossi shoes and bag, on the other hand, are cute.

We now come to serial offender Ciara wearing Givenchy Menswear. And yes you did read that correctly…

This is just terribly, terribly terrible. There is the Madonna tee-shirt (the real one, not the tawdry singer), the uneven-hemmed tunic thingy, the white leggings and the hi-top trainers, and the total cost must be around $2,000. The effect is to make Ciara look like a member of the Klu Klux Klan moonlighting as a dental nurse. And the back view is no better… .

WTF observes that the hems are a little clumsy given the obscene price tag for this tat. One of Ciara’s  greatest hits was called Speechless which more than sums up the reaction of bemused onlookers

OK Readers, that’s your lot for this week. Keep posting those comments as there was a top batch of them this week, and let us meet again next Friday. Be good x