As you know, Britain loves a scandal. Recently we have had the Jimmy Savile scandal, the BBC scandal, the BBC scandal about the reaction to the BBC scandal, the Andrew Mitchell “pleb” scandal and the Andrew Mitchell was framed and never said “pleb” scandal. Now we have the Tesco beefburgers scandal. It appears that Tesco and other supermarkets have been flogging “value” (read “shite”) beefburgers that contain things other than beef, in this case  horsemeat. Now the horsemeat is probably a damn sight more nutritious than most of the other ingredients in these burgers,  which are  composed of reconstituted bits of animal  plus a variety of additives, e-numbers, stabilisers (WTF previously thought that stablisers were something found on bicyles), onion powder, flavourings, cereals and Heaven knows what else. The great irony is that the Brits are deeply unhappy about having to eat a bit of horsey but they don’t give a toss about the crappy beef and the horrible additions, including the bucketful of fat that hardens your arteries faster than you can say heart bypass. But then there are 2 things you have to know about the Brits. First, they love anything fatty, greasy, salty and preferably fried (remember, Scotland is the land of deep fried Mars Bar). Second, Brits are very attached to animals, particularly horses, cats and dogs.  The French scoff horsemeat and, on the whole, they are far fitter than our pasty, podgy citizens, apart, of course, from Gérard Depardieu, who looks like a heifer blown up with helium. (Gérard has just declared his intention to settle in Moscow to escape Président Hollande’s proposed tax hikes, which, I fear, suggests that he might not have thought things through properly). Brits do not want to eat anything related to their chosen bet on the 4 45 at Ascot any more than  they would want to eat fricassé of Spaniel or stir-fried Siamese. But the fact remains that customers of Tesco and the other establishments are entitled to ask themselves what else they are stuffing into their face without being told what it is. In the meantime, here is WTF’s advice to would-be burger eaters. Go to a butcher and buy some lean minced beef or lamb . Put it in a bowl with some chopped onion, seasoning and an egg.  Form into patties and grill. Then eat, with or without chips.

We are in that part of the year when awards ceremonies come thicker and faster than Taylor Swift’s boyfriends. And award ceremonies mean frocks. Loads and loads and loads of frocks. Lots of girls dressing up, except that the dressing up box consists of Calvin Klein and Louis Vuitton and Carolina Herrera. And you know what? This lot from the Golden Globes would have done better with one of Auntie Lil’s old evening gowns. Never was so much effort spent for so little effect. These may be designer clothes, but because they are borrowed, they do not appear to fit properly and they just are not very nice .

We start with lovely Lucy Liu. 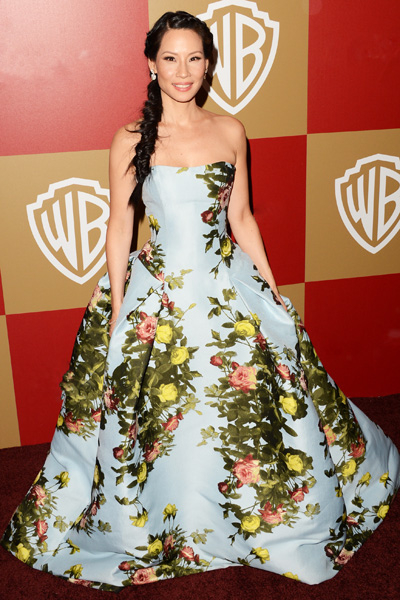 This puts WTF in mind of a backdrop in an amateur theatrical production of Midsummer Night’s Dream, not to be confused with Midsomer Murders, the police drama show in which the residents of a cluster of picture-box-pretty villages in rural England are bumped off in their droves whilst the coppers mooch about taking tea with the local residents and making a right cockup of the investigation. It must have the highest death rate per capita in the Western World…. anyway, I digress. This Carolina Herrera dress is big enough to accomodate Lucy and most of the body count in several series of Midsomer and quite overwhelms her. If it is to be worn at all, which is debatable, it should be by someone least 10 inches taller than Lucy who is no more than 5 foot 2. As for the messy plait, it look likes a manky ox’s tail.

This is excellent actress Rachel Weisz. 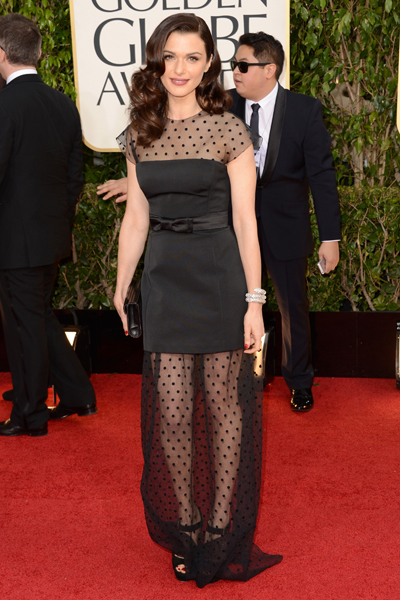 Rachel is stunning. She is a good actress. She is married to Daniel bloody Craig. She has every designer at her feet begging her to wear their stuff. And this is her choice? A Louis Vuitton mini skirt with measles?  WTF has always hated this see-through skirt mullarkey and deplores the fact that it refuses to go away. Rachel’s dress is too short, too spotty and it makes her look spindly instead of splendid. The hair and the sandals, however, are tops. 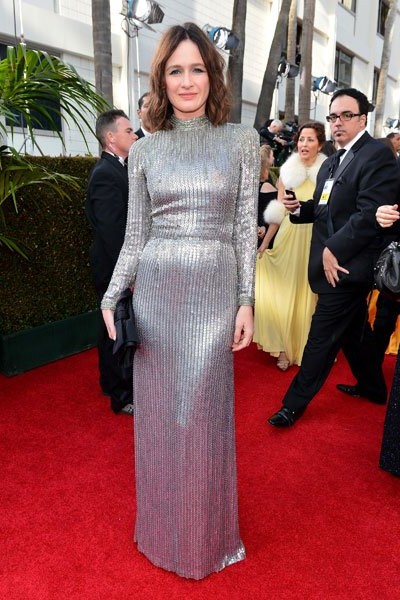 This is just plain nasty. The fabric clings to every bump and looks like a silvery elasticated bandage. If ever there was an outfit that cried out for a pair of Spanx Power Panties, this is the outfit. Such is the extent of Emily’s misery that she has clearly forgotten to brush her hair and she looks on the verge of tears. Emily love – next time, tell the stylist to piss off and wear something pretty that doesn’t make you look like your own mother and which shows your feet.

Now we have Jessica Chastain. Also, it appears, without feet. 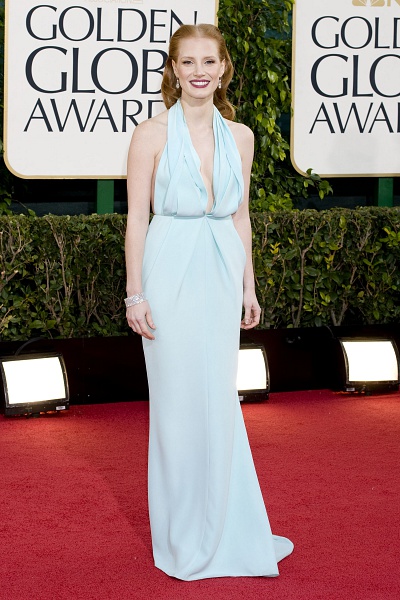 The good news is that Jessica has eschewed the nude-coloured dresses which, with her ultra-pale skin, made her look invisible. The bad news is that she has instead opted for this washed-out pastel dress by Calvin Klein. Well, I say dress but actually it looks like a long skirt with some spare material draped about the tit department. It makes her look droopy which WTF is sure she is not. Calvin was sewing up the bodice when the phone rang and, being called away, he forgot all about the dress until it was too late to finish it. The whole scenario is like Coleridge in the middle of writing his great poem, Kubla Khan. A person from Porlock (Porlock is a village near Exmoor) came to the door and distracted him. By the time he went away again, Coleridge had forgotten what it was he wanted to say and the poem was never finished. Like this dress. Jessica won a Golden Globe that night. Let us hope that she never had to bend down and pick it up.

Say hello to some new faces to this blog, actor and former NFL star Jay Crews (he is in The Newsroom which WTF likes a lot) and his wife, Rebecca King- Crews. Here they are at the HBO Golden Globes after party.

Rebecca and Jay have been married for 23 years. They have 5 children, and in addition to his acting, and her singing and directing and making apple pie, she runs her own Ministry and, of course, she and Jay have their own reality TV Show The Family Crews. WTF accepts that you can be religious and still show some cleavage but Rebecca seems to be flashing an awful lot of tit here. The dress itself is horrible, like a throw-back to the 1980’s, is unflattering and the colour blends into the carpet. Frankly the infrastructure of that dress does not appear adequate to support what is on show. His DJ with nasty facings and white button (why?) is rank. That said, they both seem very nice and to be married for 23 years is no mean achievement…

Next up we have Eva Longoria.

Angelina Jolie has a lot to answer for. Ever since she made herself a laughing stock on the Oscars carpet last year, every actress, model and Z list nobody has been sporting a skirt with a split the size of Saskatchewan and a thigh sticking out at a ridiculous angle, as if the victim of some skiing accident. Eva has gone one further with this fussy Emilio Pucci, or should that be Pukey, creation, showing both of her rather short legs and a good deal of tittage. (Her breast was actually fully exposed at some point, but WTF is mindful of the sensitivities of her readers. Frankly this picture is quite bad enough. If you want to see it, go and look at the Daily Mirror. Someone has to.) Desperate Housewives has bitten the dust, for which relief, much thanks. Eva is looking pretty desperate for publicity. And yet again, the dress is just wrong for someone so small.

Now this is a shocker of über-shocking proportions. Here is Halle Berry in Atelier Versace Vulgarissimo.

WTF is not a violent person. Admitedly she did nurture a strong desire to run onto the pitch at the Emirates on Sunday and set about the referee, balding homunculus Mike Dean, with a rolled up match programme.  Usually, however, she is a little ray of sunshine (excuse me, why are you laughing?) but anything Versace provokes WTF almost as much as the vile Dean because it is just so TRASHY. Even Katie Price would turn her nose up at this technicolour bandage-cum-toga vomitfest.  There is also something very There’s Something About Mary with the hair.

OK Readers, that’s your lot for this week. In the meanwhile, be good. Off you go and hit the comment button. Last week produced a bumper crop. WTF was much taken with the suggestion of a tattoo special and will be bringing it you very soon.