In which WTF considers the laws of Celeb Land Special

This week WTF looks at some of Celeb Land’s guiding principles, if that isn’t an oxymoron.

Play peek-a-boo with the cameras
It used to be enough in Celeb Land just to be beautiful, wear haute couture and smile. Now you have to go out stark bollock naked, save for a couple of hand embroidered dandelions over your lady areas, and hope there isn’t a wind blowing.

Heidi Klum, this isn’t a dress. This is flashing your bits from behind a swirly net curtain. Leave the burlesque to Dita Von Teese, she knows how to do it properly.

Embrace the new trend – side boobs
Everyone has been flashing their front boobs, plastic or otherwise.  So it’s time for something new – side boobs! As modelled for us here by Nicole Scherzinger.

This is a deplorable new development, not to be confused with falling out of your dress because it doesn’t fit properly (yes, I mean you, Anne Hathaway).  When Lindsay Lohan takes up a trend, you just know it’s wrong. (By the way – how did Lindsay manage to run up a bill of $40,000 ON TANNING? Just asking). Are side boobs the new cleavage?  The answer, of course, is no, they are the new vulgarity. Why would you want to look as if  your dress doesn’t fit you? What next?  Leaving your flies undone and calling it pube cleavage?  Please – just stop it. Now.

If you’re flogging something, be sure to make a splash
You’ve been off the scene for a while, licking your wounds and training with Tracy Anderson to get a “teeny, tiny body”.  And there is no doubt that you are truly very pretty. Now your new record is out and you have to hit the papers, whereupon you go off to Cannes and walk the Red Carpet.

Cheryl Cole is clearly emulating Botticelli’s The Birth of Venus.

Look like a busty orange Barbie
This applies particularly to minor UK Celebs. They all look the same.  Hair extensions last seen on My Little Pony. Plastic tits. Fake tan. (There was actually a Fake Bake party in Edinburgh the other day. It was full of Z listers, all the colour of creosote. The new face of  Fake Bake is Peter Andre. Enough said). When did the British ideal of beauty become a busty orange Barbie? Just like Meg Matthews here. 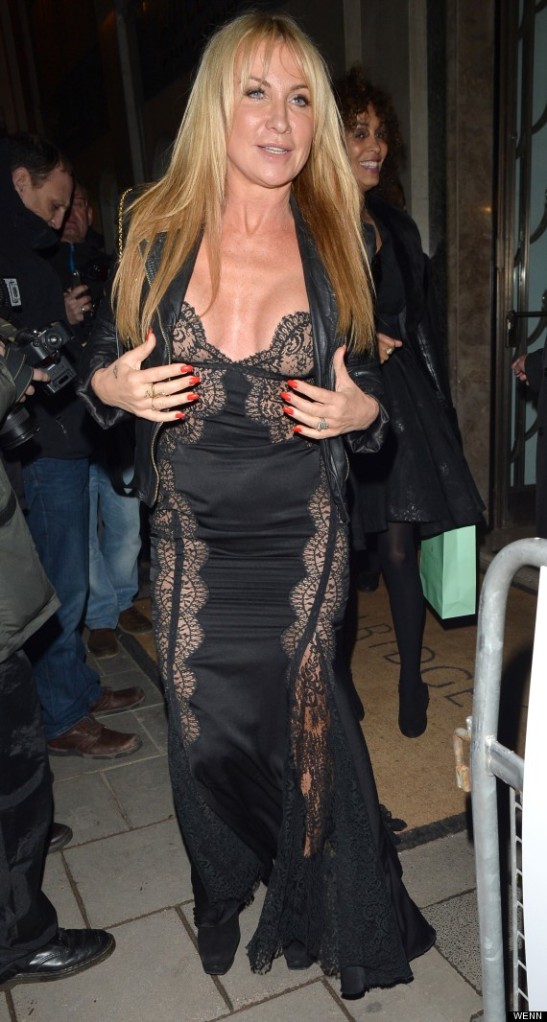 Yes, she used to be married to Liam Gallagher in the days before he smiled.  And yes, being associated with the Gallagher clan must have been traumatic. But that is no defence to going out in your nightie with your hands cupping your silicone. WTF is also very worried about Meg’s left leg which looks like it has been mauled by an angry Alsatian. That dog’s a fashion critic. Give it a blog. Oh, hang on….

Parade the weight loss
Whenever a female Celeb loses weight, she must then perform the ritual of being photographed in something as tight as possible, preferably showcasing her cameltoe. This is because in Celeb Land, being fat is worse than mass murder. YOU HAVE TO SHOW THAT YOU DID WRONG AND THAT YOU ARE REALLY SORRY. A few weeks ago it was Mariah Carey. Now it is legendary singing star Chaka Khan.

After months of egg-white omlettes (have you ever had one? It’s like eating bubblewrap), drinking shakes tasting like gnat’s piss and jogging along the beach at 4 am, Chaka is condemned to appear in a spangly bodystocking, an enormous sequinned decolletage and a cape, looking for all the world like a superannuated Superwoman. The way the light catches her crotch is making WTF want to chaka. Meanwhile, those garters (or are they gaiters?) look like peep-toe support bandages. What the hell is going on in the lower limb area? It’s just completely baffling. Chaka – I Feel For You.

And now, as Mrs. Merton used to say, let’s have a heated debate. Dear readers – hit the comment button!