In which WTF despairs of the loss of dignity special

WTF is not a prude. Really, she isn’t. But this simply will not do. Here’s the thing – why are so many female celebs intent on showing us their bits?  And here’s another thing. When did skirts stop being opaque? When did it become acceptable to bare your bottom to an appalled public? Or flash your camel toe? What awaits you, should you feel brave enough to embrace it, is a rancid collection of body parts no-one wants to see.

Let us start with Kristen Stewart at the premiere of Snow White in which she stars. 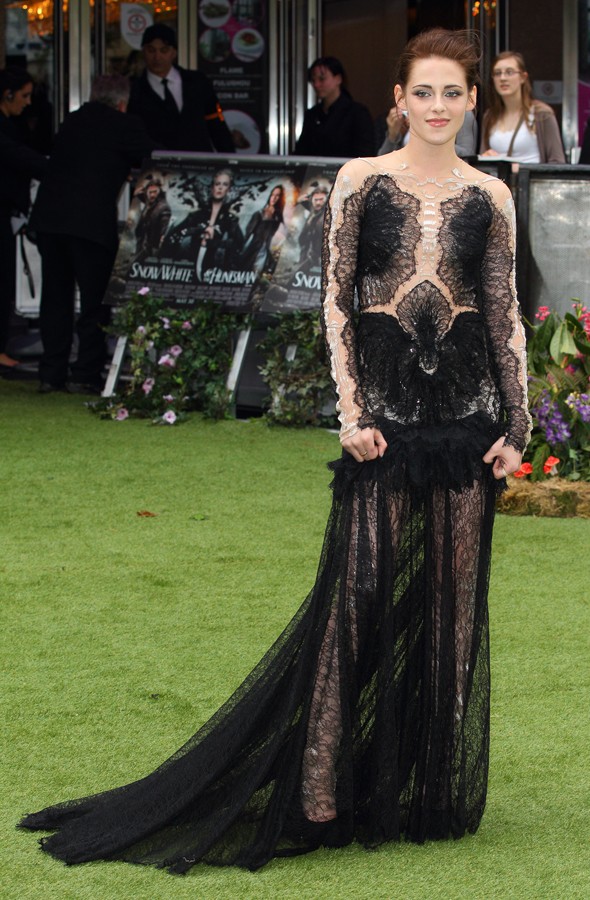 Yikes. This is quite possibly the ugliest dress ever. WTF went to the Damian Hirst exhibition the other day and there were giant butterflies all over the place (including live ones), some stuck onto boards. Whoever designed this monstrosity appears to have nicked Damian’s concept.  And then of course there is the obligatory see-through skirt revealing pasty legs. The poor girl looks miserable as sin although, to be fair, she usually does.

And not to be outdone in the see-through stakes, here is her co-star Charlize Theron. 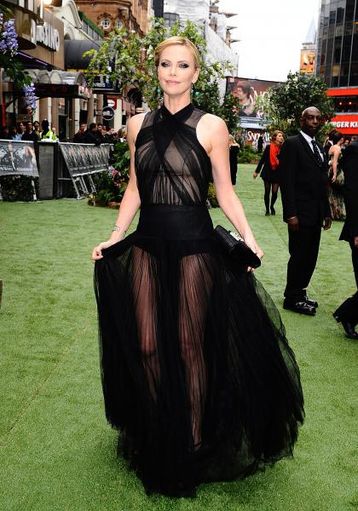 Charlize is one of the most beautiful women in Hollywood,  is an A-lister and can act. She does not need to flash either her knickers or her legs. There is something very Tutankhamun about the wrapped bodice.  And it’s by Dior. For shame.

There appears to be fringing around the crotch  which WTF finds deeply disturbing. Meanwhile  a note to Alesha – layers of chiffon do not stop this from being a circus costume. You look like a trapeze artiste.  As WTF tweeted at the time, Pudsey the dog  (for whom WTF has developed a deep fascination) was better turned out than this on the night. And has more talent. Mind you, Pudsey was flashing his male doggy-bits as well but then he’s a dog. (WTF nearly fell out  with her close friend and mother of  the sainted godchild about Pudsey. WTF maintained that the dog and his owner were enchanting. Said friend said she despised performing animals and that Pudsey was ugly. It nearly got nasty). 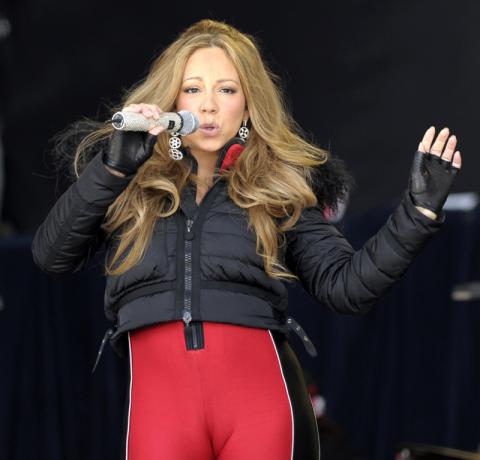 We are all thrilled that Mariah has lost loads of weight, and we wish her a hearty mazeltov. But just because she has shed the pounds does not mean that we want to see her camel toe encased in scarlet spandex. Older readers may recall an advert for the Playtex Cross-Your-Heart bra that promised its wearers to “lift and separate”. Enough said.

But we have been skirting around the edges of unpleasantness. Now we have to boldly go where no man has gone before, boldly. This is German “model” Michaela Schaeffer and this is what she didn’t wear to the German premiere of Men in Black and it is just terribly, terribly terrible.

This strumpet appears to be encased in discarded reels of film. She has no right to be anywhere near Tommy Lee Jones (as far as WTF is concerned, the man is a god) and Will Smith (he’s good too, but he needs to lose that wife and quick). What is occurring? Several years ago, you’d have been arrested or sectioned for walking about in public like this. And the hair! She looks like Medusa. It’s quite hard to discern where the hair stops and the “dress” starts. A gust of wind and Michaela might have whipped herself to death. In previous MiB films, Tommy and Will had a trick of making people forget things by zapping their brains. WTF needs some of that brain zapping to remove the indelible image of Michaela displaying her plastic tits and bare bottom to the good burghers of Berlin and beyond.