Sadly, not only do Johnson and Trump have absolutely no idea how to get kids safely back to school but their respective Cabinet Ministers for Education have no idea where to find their own bottom, not even when equipped with a pair of hands, a map and a mirror. In the UK, education has been delegated to Frank Spencer lookalikey and soundalikey, Gavin Williamson, a man for whom the word ‘gormless’ would be complimentary. Williamson bolted forth from obscurity in November 2017 when Theresa May made him Secretary of State for Defence. As Williamson was her Chief Whip, it was thought that he must have had the goods on her, whatever those goods may have been. Eighteen months later, in May 2019, he suffered the indignity of being sacked for leaking and then lying about the leaking, but was reinstated to a Cabinet post by Boris Johnson in July of that year and given the education brief. How children are supposed to go back into already-overcrowded classrooms and maintain a safe distance from each other and their teachers is unclear. At least it is unclear to Williamson, but we are to take it on trust that he has a plan. He is always about to unveil the plan, although like Trump’s evidence that Barack Obama was born in Kenya, and Billy Bunter’s postal order, we are still waiting. And we will go on waiting long past the time when these kids are having their own kids and grandkids because, to use that fine old Yorkshire expression (he hails from the county), he is a twonk.

But there is good news for Williamson. Compared to his American counterpart Betsy DeVos, he is Aristotle, Confucius, Euclid and Socrates rolled into one. DeVos is the daughter, sister and wife of billionaires and donated a lot of money to Trump’s election campaign, thereby securing her the job of looking after the States’ education, despite her intense dislike and suspicion of State education. It is like putting a vegan in charge of farming (oh, hang on – Jeremy Corbyn did just that). DeVos is also insistent that children must go back to school. When asked what her plan was, she was clear – children must go back to school. It was pointed out to her, repeatedly, this was not a plan, it was an order. DeVos was not deterred by such nonsense.  She had a plan. Her plan was that other people should come up with a plan.  Which, to be fair, is a plan. Just not a very good one.

These two – four, if you include their bosses – should not be in charge of a kindergarten tombola  let alone the education, health and wellbeing of millions of children. Of course children need education but they also need to stay healthy, and even if they themselves do not become ill, they can pass it onto others who could. But the economy trumps that minor consideration. For shame.

WTF’s dad used to rant on (we’re all like that in our family) about untalented people infesting the television (this was in the days before social media) and how this was ‘the apotheosis of the untalented’. Thank Heaven he is not still alive to witness the Z-Listers who are famous for being famous, or, even worse, famous for being attached to someone famous. They are a shower, freeloading their way from party to party and premiere to premiere with all the other Z-Listers. Since none of them have anything to say, who knows what they talk about? Anyway, here is a glimpse at some of their worst fashion faux pas. We start in December 2012 with Nancy Dell’Olio attending the GQ Awards in London. 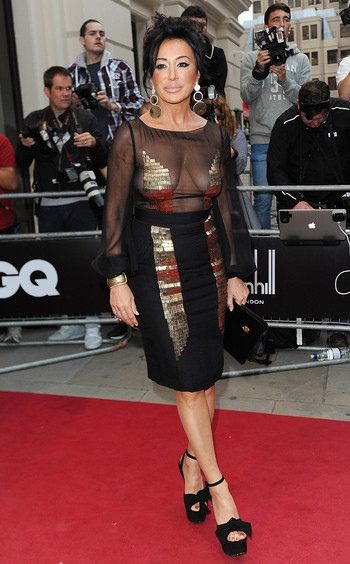 Ah, Nancy! A qualified lawyer in Italy, she sprang to public attention in 2001, when she came to the UK as the partner of hopeless, overpaid, Sven Goran Eriksson who was the new England football manager. Nancy was everywhere, flashing the flesh and displaying a particular penchant for cameltoe.  This hideous outfit displayed a great deal of tired-looking tit while her makeup made her look like an Egyptian shabti. 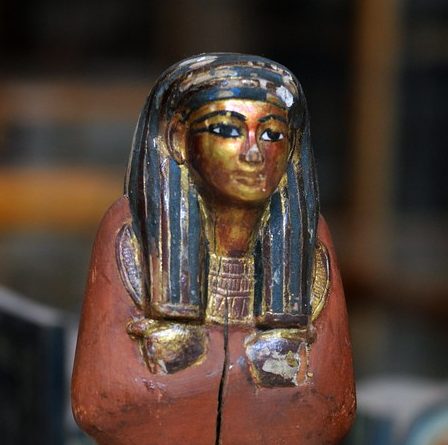 In March 2014, fashionista Daphne Guinness  was seen parading around New York in this extraordinary ensemble. 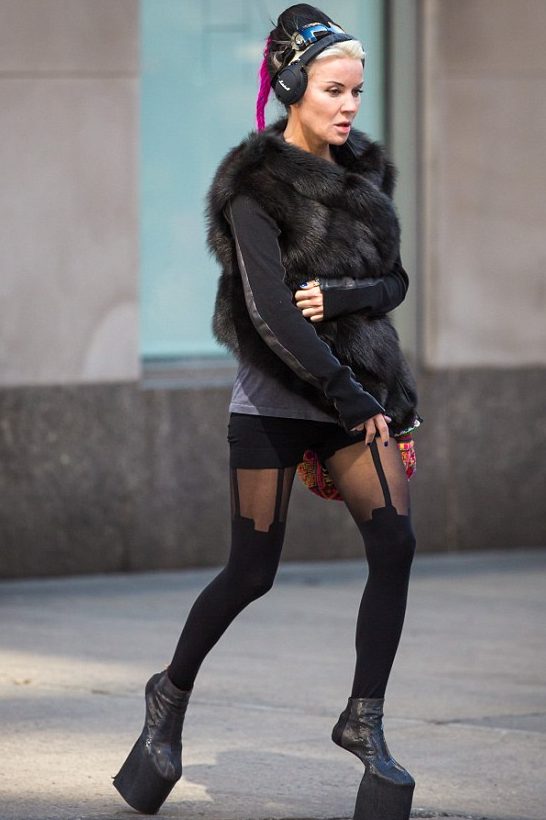 What is the purpose of wearing a fur gilet while simultaneously exposing your thighs to the elements in tiny shorts and suspenders over tights?  As for those ridiculous hooves, apart from constituting a serious health hazard, they are as ugly as anything WTF ever did see in her life. Black Beauty lives….. 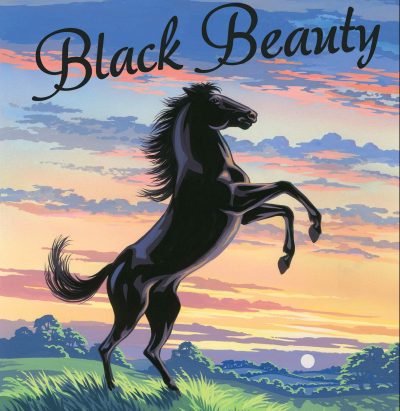 In January 2015, TOWIE nonentities  Tommy Mallet (left) and Mario Falcone were out and about in London. 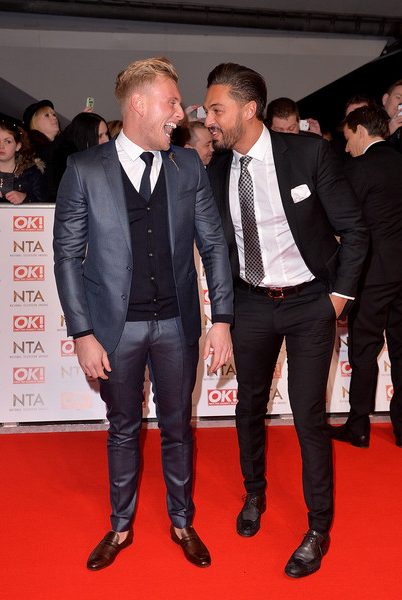 If you were to count their collective brain cells, you would not even need both hands. Mari0 could be described as dapper, but Tommy’s trousers were so snuggly that there was no need to ask which side he dresses. Yurgle. And this was also the beginning of the hideous no-sock trend on orange feet. 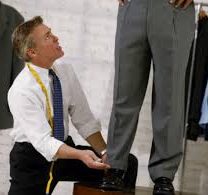 October 2014 saw ‘author’ (also model, celebritee and serial divorcée)  Katie Price at the launch of ‘her’  novel, ‘Make My Wish Come True’. Which she did not pretend to have written. 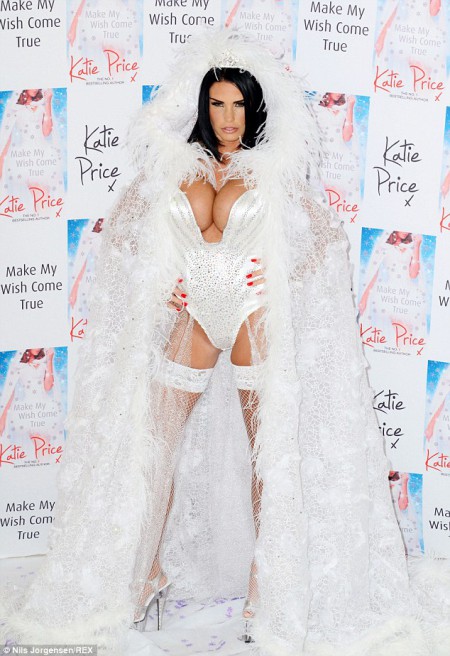 Katie’s chest has gone up and down more often that the US Stock Market in the wake of Covid19. At this point, it was up, in the sense that the dome of St Paul’s Cathedral is up. It was as if the Mitchell Brothers from EastEnders were hiding in her bodice, 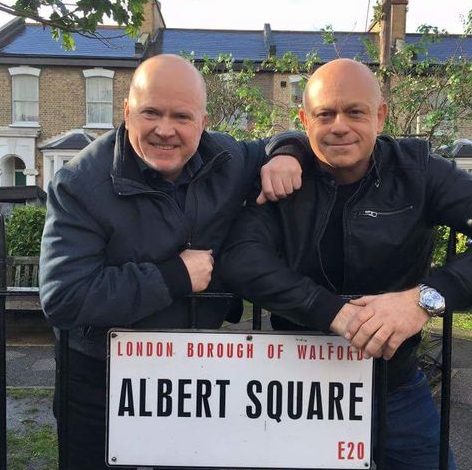 In November 2015, we saw Charlotte Dawson parading around Manchester in this. 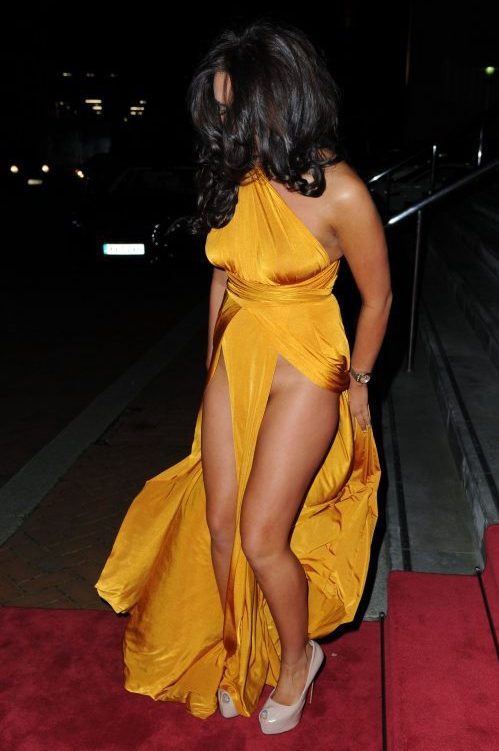 It is to be hoped that Charlotte’s hair was draped across her face out of a sense of shame, but this was not the likely explanation, given that Charlotte’s only raison d’être, other than being the daughter of comic Les Dawson, is to put horrified onlookers in fear of an imminent minge moment. This was a perfect example of genitalia curtains, creating the impression that she was having a pee.  And no, you are NOT getting a comparison picture. It’s breakfast time.

Here we are in May 2016 with former WAG Lizzie Cundy. 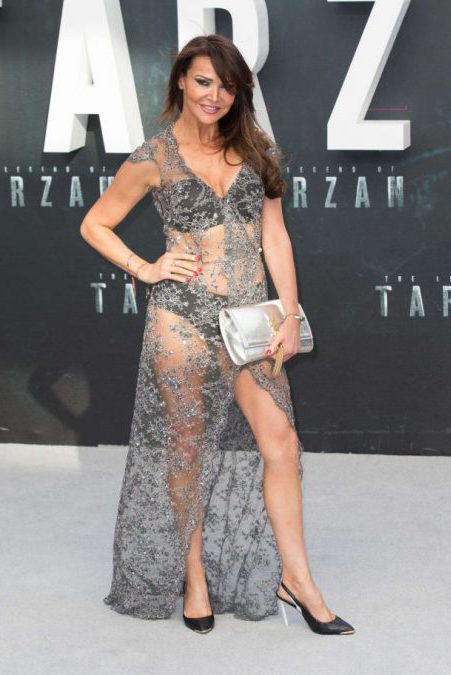 Lizzie used to be married to footballer Jason Cundy, who left her for an opera singer (no, truly). She is more ubiquitous than a maskless shopper in a London supermarket and WTF harbours serious doubts that Lizzie owns a knife and fork as she is always out and about, usually attired in outfits like this one and showing her all.  If a net curtain went to a fancy dress party as Lizzie Cundy, no one would blink an eyelid.

In January 2017, Lady Victoria Hervey  appeared at a BAFTAs party in Los Angeles. She is another one who gets everywhere. 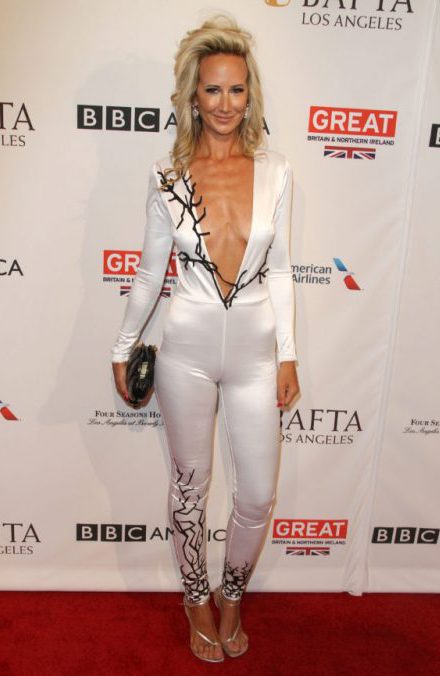 Milady is the daughter of a previous Marquess of Bath, and er, that’s it. She is as much use as an ashtray on a motorbike. This outfit was, to say the least, unflattering to her gaunt figure, with more bones on show than in an ossuary, not to mention a lot of cameltoe. 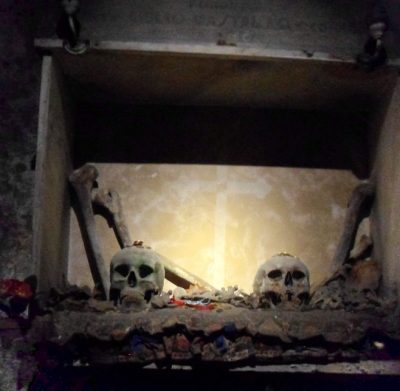 In March 2017, the ‘star’ of Geordie Shore Marnie Simpson tottered around Newcastle in this. 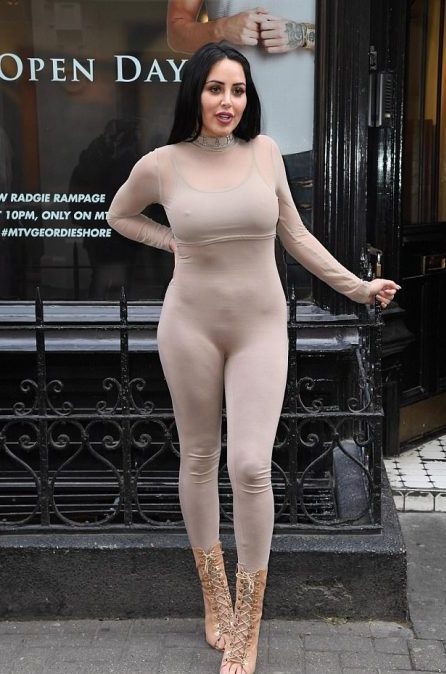 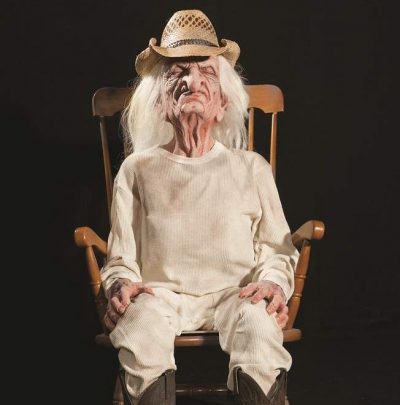 We are now in January 2018, where we find TOWIE person Bobby Norris at the National Television Awards in London. 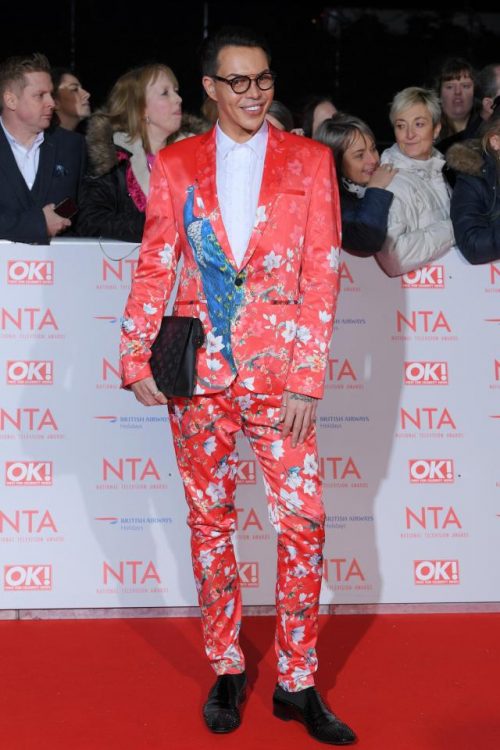 Bobby is best remembered for his foul cocksock, but we have all seen enough of that particular item, and he looks just as terrible in clothes. Here he is, the Grays geisha. 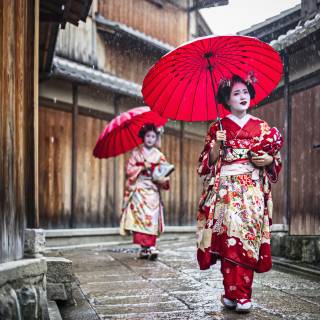 October 2018 saw another ghastly outing from ex-TOWIE nobody, Lauren Goodger. 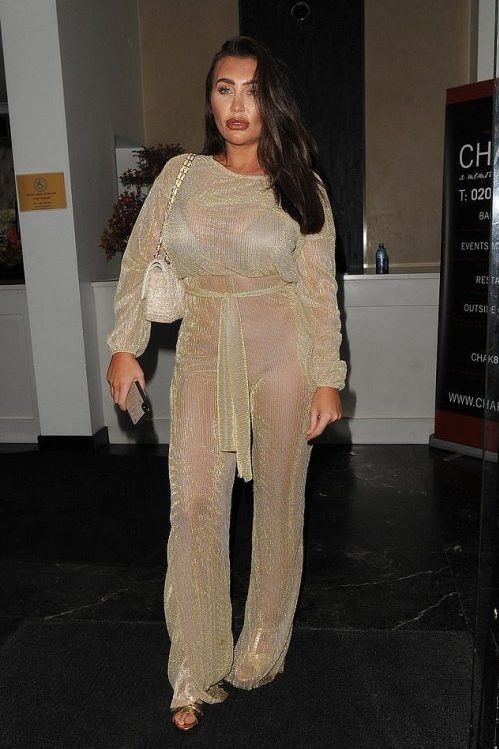 She left the series. Her former fiancé is now  a TV presenter married to a talented and pretty actress, but true fame has eluded Lauren, whereupon she became ever more desperate, going under the knife again and again and choosing ever sheerer outfits. Like this. 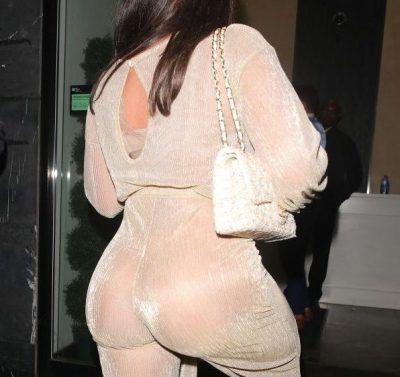 Finally, another one from Geordie Shore. In January 2019, Chloe Ferry went out in Newcastle dressed like this. That is her boyfriend Sam. 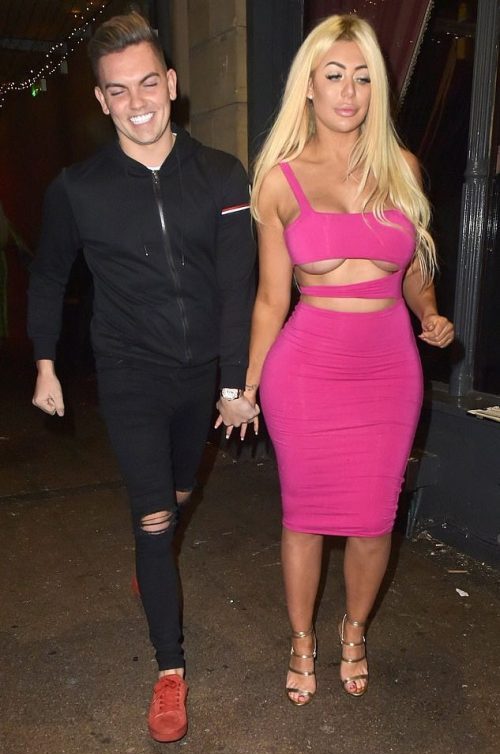 This was not so much under-boob as thunder-boob, and of course we had the dreaded nip slip. This is what happens when you venture out with your top half wrapped only in a tiny fuchsia bandage. 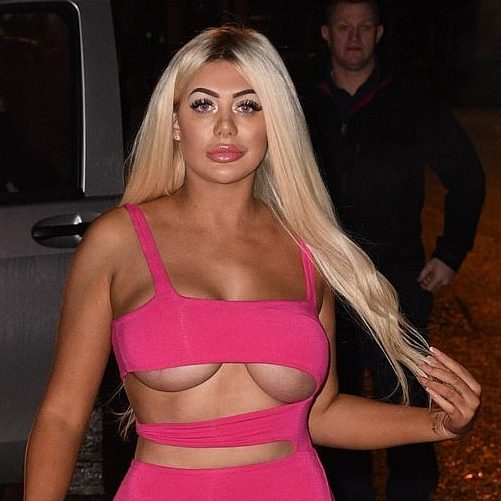 This week’s It’s Got To Go comes from WTF aficionado  Jan, locked down in Melbourne, Australia  (again), who sent in this absolutely revolting picture of how not to wear a mask.

WARNING – THIS IS DEEPLY, DEEPLY, HORRIBLE!!

AND HERE IS ANOTHER WARNING TO GO WITH THE FIRST WARNING!!!!! 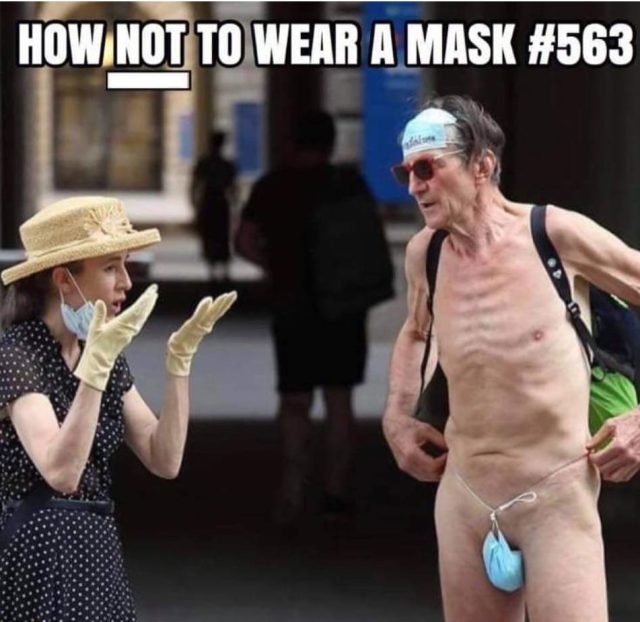 Last week  WTF aficionado Yvonne from Jedburgh complained that It’s Got To Go had gone. Well, this week it is back, and Yvonne might wish that the clock had been rolled back to 10 July. That will teach her.

OK Readers, that’s your lot for this week. Do keep those comments coming in, which keep WTF cheery.  And please do not forget both your excellent suggestions for It’s Got To Go and your nominations for the fashion retrospectives. Let us meet again next Friday. Be good, STAY INDOORS AND/OR DISTANCED IF YOU CAN, AND WASH YOUR HANDS  x