This week, the President of the US came to call and  did all the things he does best. He lied through his teeth on a variety of topics, including a claim that the streets were thronged with cheering fans, their love for him pulsating through the capital like electric shocks. He pushed his family forward at the taxpayers’ expense.  He insulted his host’s granddaughter-in-law, the Duchess of Sussex, and the Mayor of London, Sadiq Khan, even before his plane had touched down on British soil. He made a total fool of himself, displaying dizzying degrees of arrogance, ignorance and self-absorption. And we learned that he is aiming to get his hands on privatising the NHS, even though he denied it the day after he had said it, and two days after his Ambassador had said it. Business as usual for Trumpy. He then flew to Shannon Airport to hold a joint press conference with a bemused, and frankly pissed off, Leo Varadkar, the Irish Premier, where he embarrassed himself by suggesting that Irish Border issue was the same as America’s Mexican border issue (it isn’t), that Ireland wanted a wall (it didn’t), and that the Republic was somehow part of the United Kingdom (which it hasn’t been since 1937 – the clue being in the name Republic). After which, he went off with his entourage of schnorrrers, noch-schleppers and sycophants to his golf club at Doonbeg, thereby advertising another Trump property at other people’s expense.

Yesterday, he flew off to Normandy for the D Day Commemorations, where he delivered a ballsaching speech in a flat monotone with the look of wonder he has when reading something for the first time off a teleprompter, sniffing loudly for reasons that WTF can only guess at. Maybe he had forgotten his handkerchief. In keeping with the sombre occasion, remembering the bravery of the thousands of young men who stormed Omaha Beach on 6 June 1944, many never even getting as far as the shore, and others shot dead on the sands, Trump then granted an interview to Fox News’ Laura Ingraham, a woman so rabid that were she to so much as touch you, you would be running to the doctor for the antidote (massive injections in your stomach). Pictured against a background of row after row of little white crosses gleaming in the sunshine, Trumpy used the solemnity of the place to slag off Speaker Nancy Pelosi, Vietnam Vet Robert Mueller, Mexico, asylum seekers, and those Republican Senators who do not appreciate his threatened tariffs or his selling arms to his murderous Saudi mates by Executive Order. Because nowhere is inappropriate to kick your political enemies, even a graveyard for the fallen heroes you have crossed the Atlantic to extol, and the few surviving nonagenarians you have come to praise. Then it was back to Ireland for more free publicity for his club and a few rounds of golf.

The other lowlight of the trip was his ‘interview’ with Arselicker-in-Chief, Piers Morgan. WTF had always foolishly imagined that an interview was when you are asked a question and are held to account for the inconsistencies and evasions in your answer. That, however, is not the Piers Morgan way, which is to smirk whilst your Presidential pal makes stuff up on the spot. And so it was that Trumpy was presented as unable to fight in Vietnam because of his bone spurs (bought by Daddy Trump from one of his tenants), allowed to claim that he was ‘not a fan’ of the war because it was ‘far away and no one had heard of it’, unchallenged at his inability to distinguish between climate and weather, permitted to assert that transgender personnel should not serve in the military because they need a lot of post-operative drugs, whereas the military does not allow you so much as an aspirin, and got away with claiming that Mueller had to change his testimony even though Mueller never testified and therefore did not correct it (in fact, he was correcting Barr’s dishonest summary of it).  It was a wonder that WTF did not put her foot through the screen.

He has gone home now, there to sell his imaginary triumphs and oafish ignorance to his base of the uneducated, the uncivilised, the cretinous and the gullible. Those corpses at Omaha beach must be turning in their graves.

We start our review of the last seven days’ sartorial shit pile at Buckingham Palace and the State Banquet for Donald Trump and First Lady Melania Trump, wearing Dior. Oh, that’s the Queen in the middle, wearing Angela Kelly. 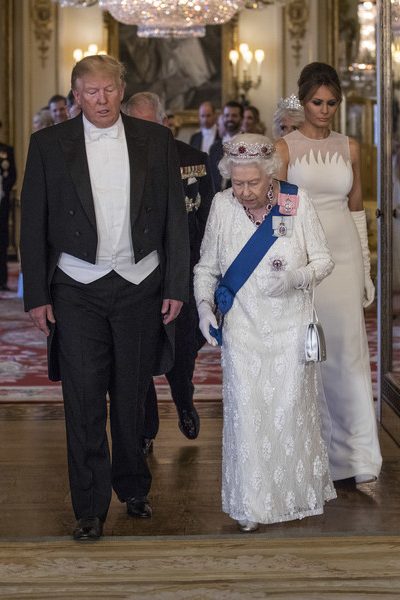 Donald looks like a plump Patagonian penguin in a truss and comedy trousers. 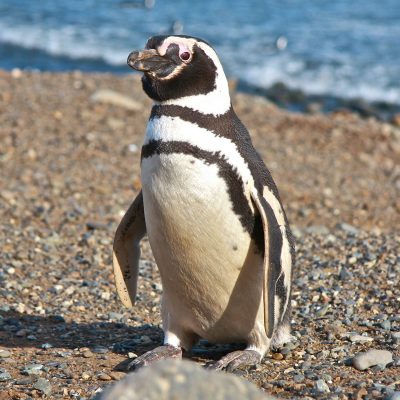 Why can’t he find a suit to fit him? That said, white tie and tails are pretty unforgiving when you are a 350 pound slob with a fat stomach and no class. The white waistcoat is supposed to be level with, or minimally below, the cut of the coat. But that would leave his gut spilling out like cake mix leaking from a loose-bottomed tin. Thus his tailor was obliged to extend the waistcoat almost to crotch level so as to contain the spilth, and make the coat so big that the sleeves are too long. And he isn’t wearing a wing collar.

Meanwhile, why are Melania’s clothes always so snug, hugging her augmented breasts tighter than a boa constrictor in a bad mood? 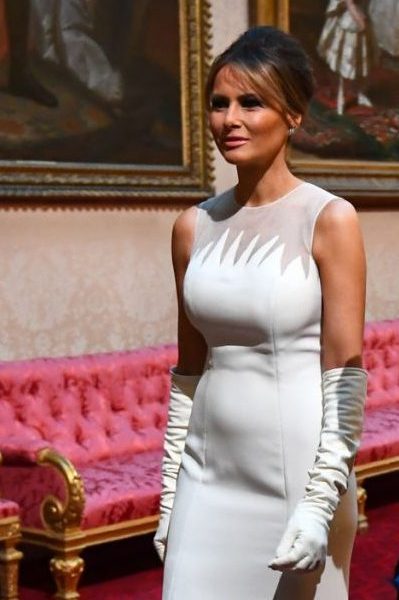 And why do her gloves have more crinkles than a jumbo pack of crinkle crisps? Has she never heard of the expression ‘fits like a glove?’ 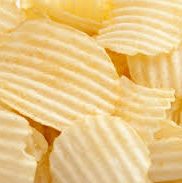 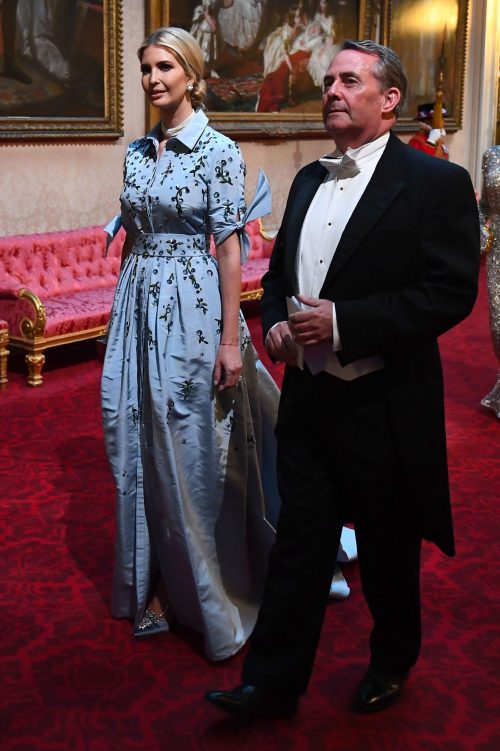 Ivanka has come straight from performing a matinee performance of Oklahoma! 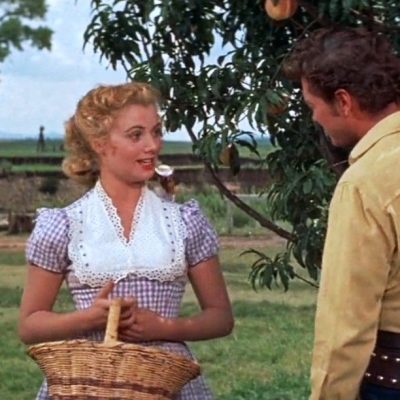 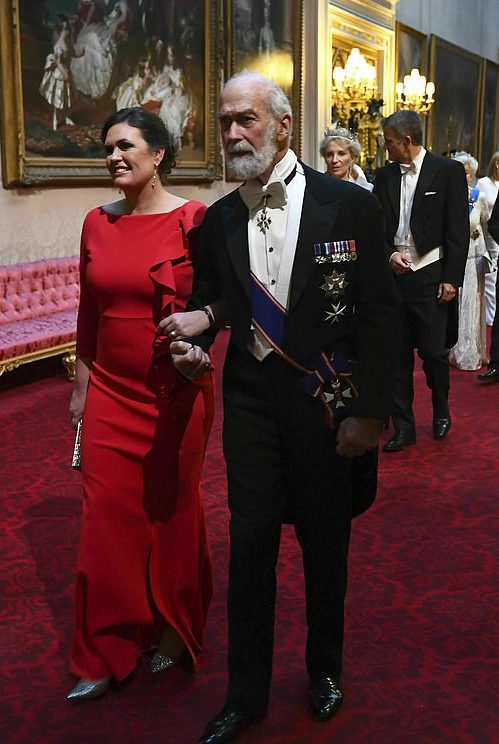 Yikes. Has she not heard of Spanx? That dress is so tight you can see her bellybutton. WTF is surprised that it didn’t split half way through the Strawberry Sablé.

And in her last WTF appearance as Prime Minister, Theresa May. accompanied by Prince William. No one has owned up to designing this dress. Good call. 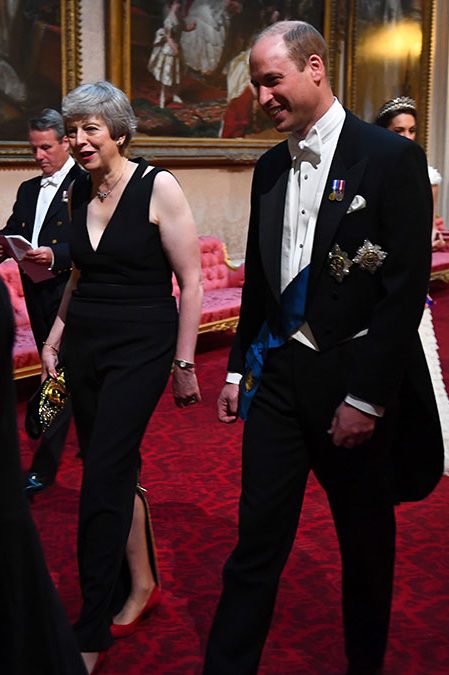 If you have to show your tits and wear slashed shoulders, whether you are Prime Minister or not, you should ensure that you do not burn yourself  in the sun so that you end up with visible tan marks on your chest, shoulders and arms. There is very little less alluring than two-tone tits, especially when the tones are scarlet and milky white. Bare pink legs and red shoes only add to the prevailing sense of dismay. These two have been getting on WTF’s nerves. Ever since they got married in a three-day extravaganza in India, they have been going on about their nuptials non bloody stop. They even pitched up at the Cannes Film Festival in wedding white, requiring WTF to rush urgently towards the nearest receptacle. And she was at it again last weekend, gushing away in The Sunday Times about her spouse and her BFF Meghan Markle. That said, she looks nice here, which is more than can be said of Nick, who is wearing what is best described as an aubergine satin boiler suit, showcasing bare ankles in black suede loafers. Perhaps it was his homage to D Day and the memory of Sir Winston Churchill, only Winnie had less hair and better shoes, 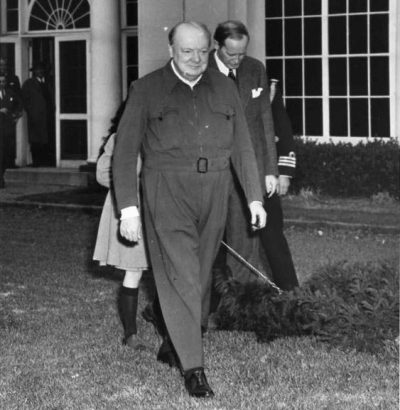 To London and the British Soap Awards where we encounter young actress and singer Tallia Storm, wearing Jetmira Bejtullahu. 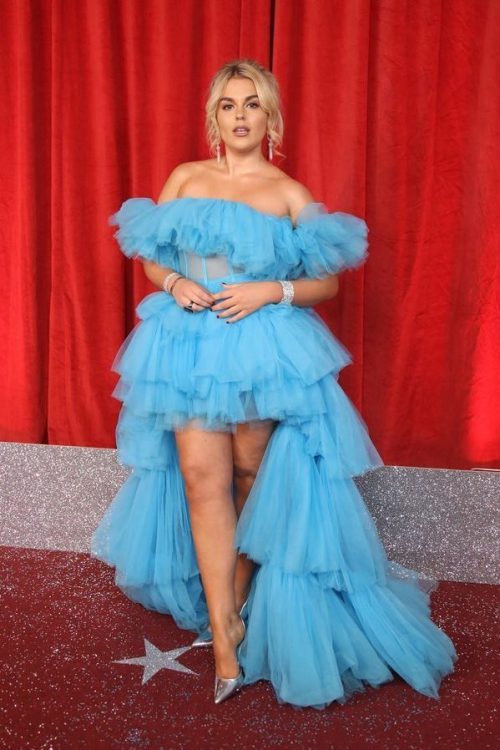 We are experiencing a positive deluge of these fluffy shower puffs at the moment. This example is particularly foul, in that it has a tit-flounce, a mesh midriff, and a mullet. It makes Tallia look like Nell Gwyn having tumbled beneath someone’s carriage wheels in Pall Mall.

To a favourite event, the Country Music Awards in Nashville, Tennessee, and singer Meghan Linsey wearing who can even say what? 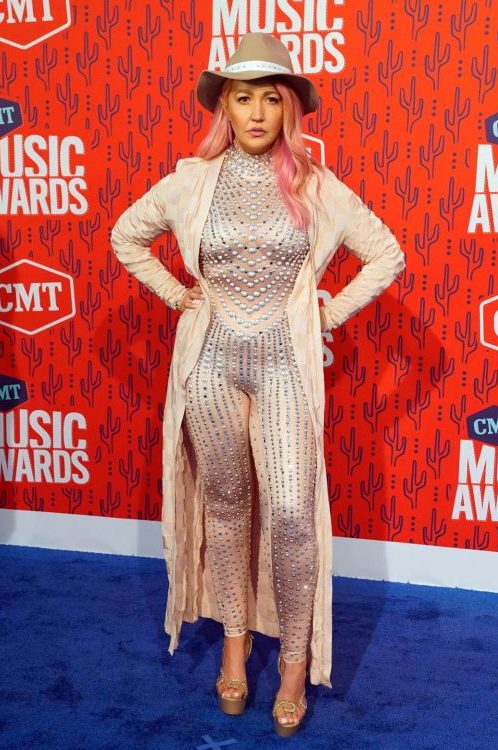 Meghan seems to have succumbed to a particularly nasty strain of impetigo, and the cameltoe is going to give her a beastie yeastie, requiring Canesten to be delivered to her home by tanker. As for the pink hair, WTF prefers not to speak of it. 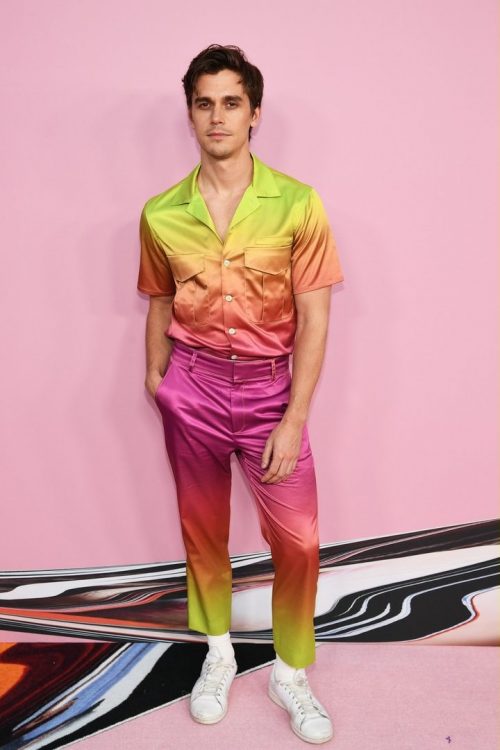 On first catching sight of this getup, WTF assumed that artisans across the world were donning rainbow overalls in solidarity with Gay Pride for Plumbers or some such, but it turns out to be just another truly ridiculous fashion item. How short are those trousers????? And why????? 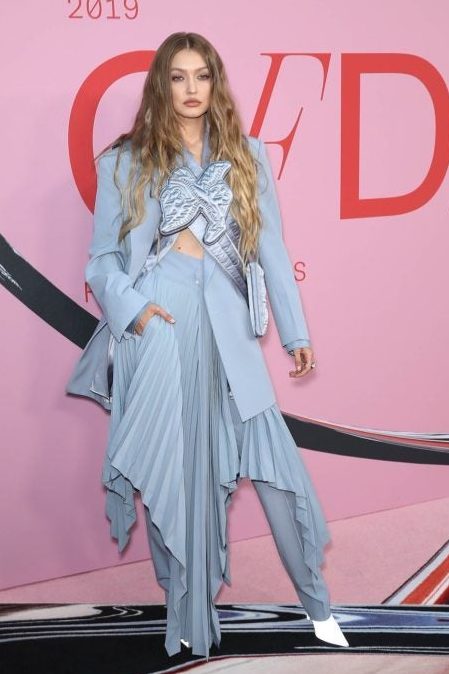 What is that thing across her chest? Is it supposed to be a flying dolphin on a satin machine gun belt, like a silken baby-blue Rambo? There is just too much of everything and not enough of anything to like.

And finally, we have åctress Dania Ramirez at the premiere of the movie Dark Phoenix, wearing Leilu by Alex. Brace yourselves. 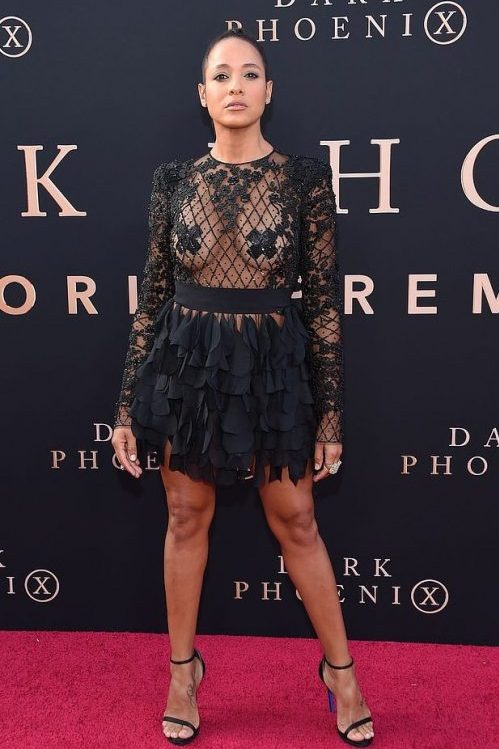 Boobage in abundance, her nips covered by X marks The Spot, like target practice at a military training camp. Meanwhile, that is one hell of a minge fringe.

This week’s It’s Got to Go comes from WTF aficionado Sue Peters, who brought this horror to her attention. They are by Pretty Little Thing and cost £25. 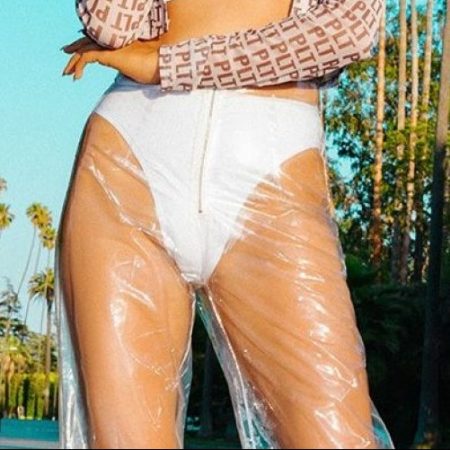 Oh FFS! How much more of this nonsense must we put up with? It reminds WTF of the scene in The Full Monty, when Mark Addy wraps himself in cling film to try and lose weight whilst simultaneously consuming a Mars Bar. It’s Got to Go.

OK Readers, that’s your lot for this week. Please send in your comments, and don’t forget your utterly splendid suggestions for It’s Got To Go. Let us meet again next Friday. Be good. x