In any sane country, Chris Grayling, Secretary of State, would long since have been consigned to a home for the terminally useless, where he would present even the most skilled physicians with their greatest challenge to date. This King Midas is not so much in reverse as hurtling backwards over a cliff at full speed, showering citizens with ordure as he crashes down to earth. But this is not a sane country, far from it, and so Grayling is in charge of Transport, and in particular, transport in the event of a no-deal Brexshit. Brexshit is already a mess. Add Grayling to the mix, making the mess messier, and you have the perfect storm. Continuing his practice of making a cock-up of everything he touches, he has awarded a £14m contract to run cross-Channel ferries to Seaborne Ferries, a company with no ferries, which has never traded and some of whose directors have a colourful business history. The theory is that we will need extra freight arrangements in order to ease the backlog once we are out of the Customs Union, at which point the the M20 will become a parking lot, Danish insulin will be held up at Calais for days and Dutch tulips will wilt in a 50km queue at Ostend. Even the rehearsal for this scenario was an unmitigated disaster, with £60,000 gurgling down the plughole on an exercise where an insufficient number of trucks volunteered, even at £550 a time, to cause a traffic jam. Matters took a yet more comical turn when the company’s standard terms and conditions turned out to be copied from a home food delivery business, prompting much merriment and cries of “Mine’s a pepperoni pizza with extra mozzarella”. Grayling is, as ever, unrepentant, safe in the knowledge that May cannot sack him as she is a bit short of candidates. Once upon a time, Ministers resigned when they screwed up. Now they  hand out millions to a company where one director’s previous company sank without trace, owing a fortune to Her Majesty’s Revenue and Customs, and another director was once banged up for unlawful possession of a shotgun, and then they pop up on TV and radio, boasting of their pride in supporting a “start-up business”. With our money.

Meanwhile, shaven-headed yobs with the IQ of a root vegetable are bravely protecting our democracy by harassing and intimidating Remain MPs, most notably Anna Soubry, calling them Nazis and Fascists, and issuing threats against police officers, declaring them to be “fair game”. One hero was caught on camera telling a black copper “and you’re not even fucking British, Mate”. Perish the thought that these protesters could ever be described as “racists”. They just want the Will Of The People to prevail, even though many of The People did not understand the consequences of what they were voting for, and were spoon-fed lies by the ladleful. But the People Have Spoken and so here we are, less than three months from B Day, adrift on a friendless sea, our Grayling-commissioned vessel fatally holed below the waterline, and the crew frantically steering it onto the rocks while we bail out the water with jam jars. There are life boats, or the options of changing course or delaying the journey, but Admiral May is determined not to use any of them. As Dido sang, “I will go down with this ship”….

Our first dip of 2019 into the week’s clothing cloaca is at the Golden Globes in Hollywood, the first of the annual Awards for thespian types. We begin with musician and singer Joanna Newsom, wife of presenter Andy Samberg, wearing Rodarte. 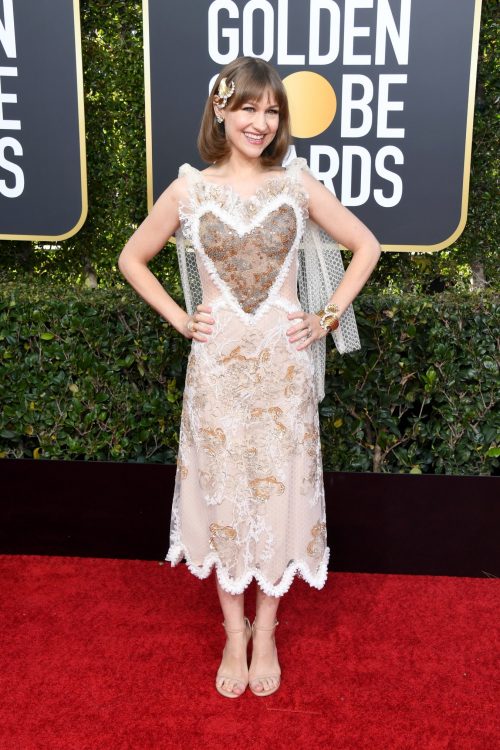 Next up, we have actor Billy Porter, wearing Randi Rahm. 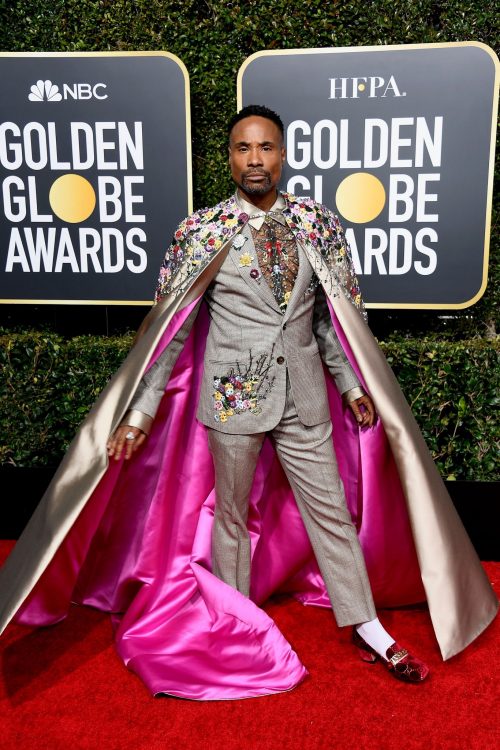 Billy is like a verdant meadow in velvet pumps and white socks. But WTF does admire the shocking pink silk lining, like the dress Marilyn Monroe wore in “Diamonds Are a Girl’s Best Friend”. 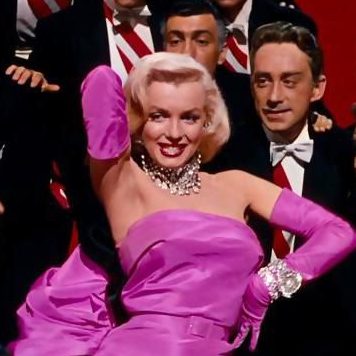 Next up, we have Killing Eve actress Jodie Comer, wearing Ralph & Russo. 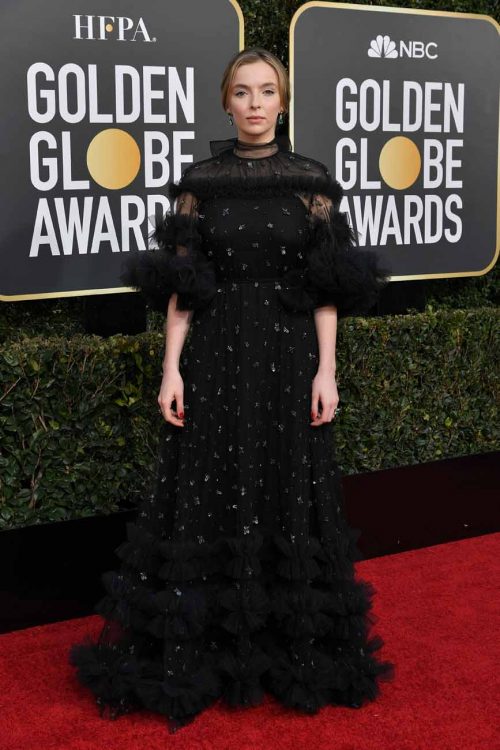 Next up, we have actress Indya Moore, wearing Louis Vuitton. 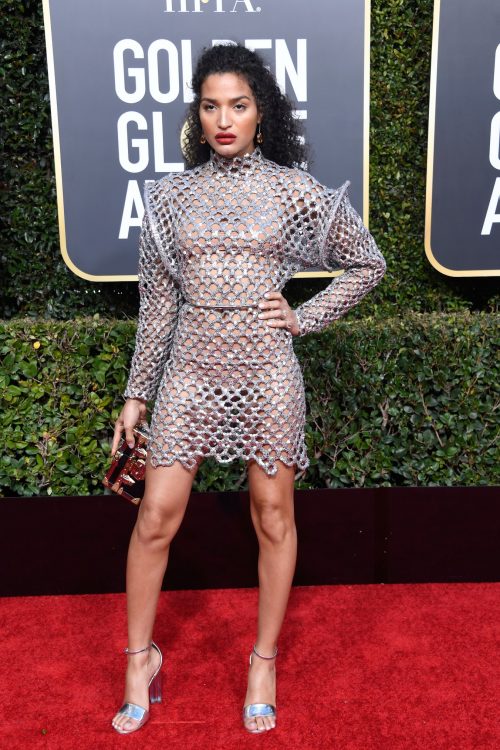 Indya is modelling the newest prototype for Donald Trump’s Big Beautiful Wall. This one really fits the bill, as it is see-through and is apparently made of steel. Sadly, recent tests have demonstrated that you can cut right through Trumpy’s wall. One can but pray that Indya has come prepared…. 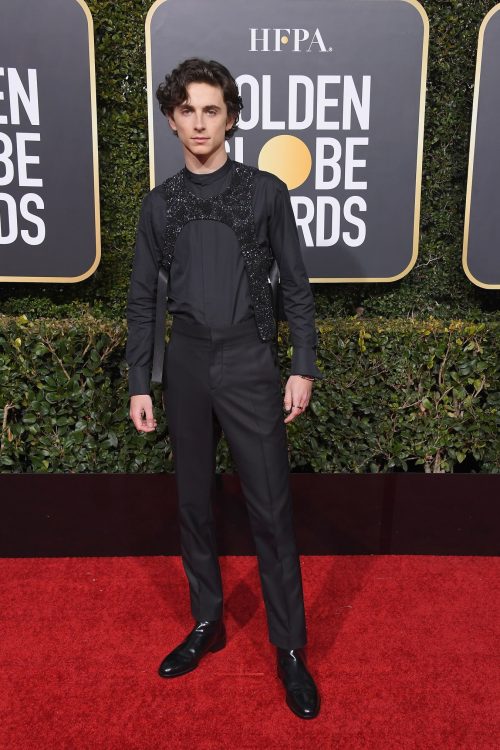 Timothée is a dedicated follower of fashion, and so he has permitted Vuitton to dress him in a sparkling kiddie harness and some very snug-fitting trewsies. 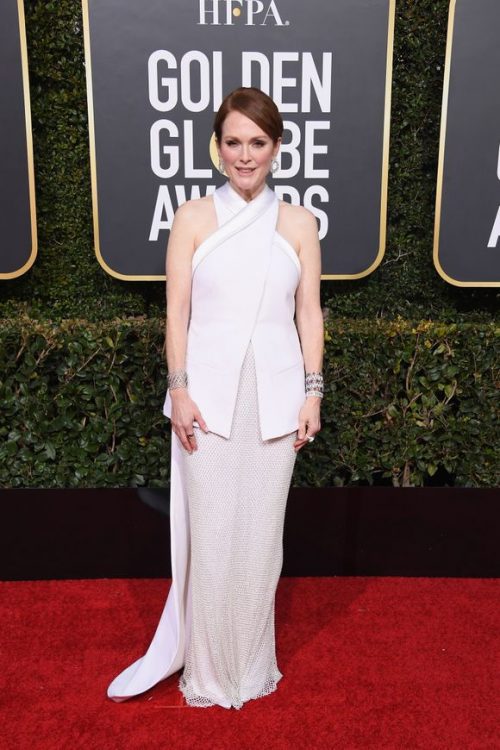 Oh Julianne! White is so not your colour, but even worse, you look as if you are in a neck sling. And considering that the outfit is custom made, it doesn’t fit. 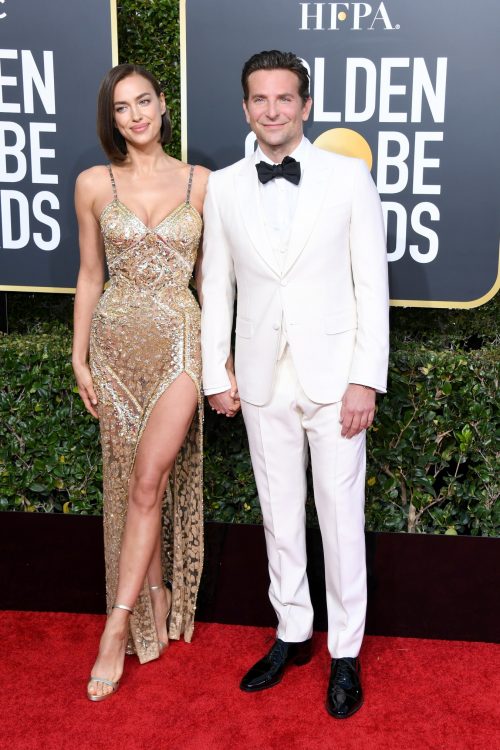 Bradley is wearing a truly terrible suit, like a louche steward on a cruise liner, with elephant vagina crotch and a comedy bow tie.

Actress Kate Beckinsale popped into one of the after parties, wearing Aardnevik. 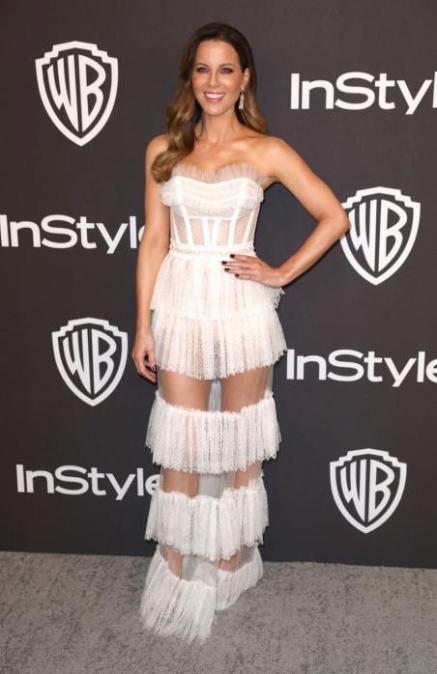 This appears to be an elongated white Christmas tree that has fallen into the hands of a crazed topiarist, complete with minge fringe. 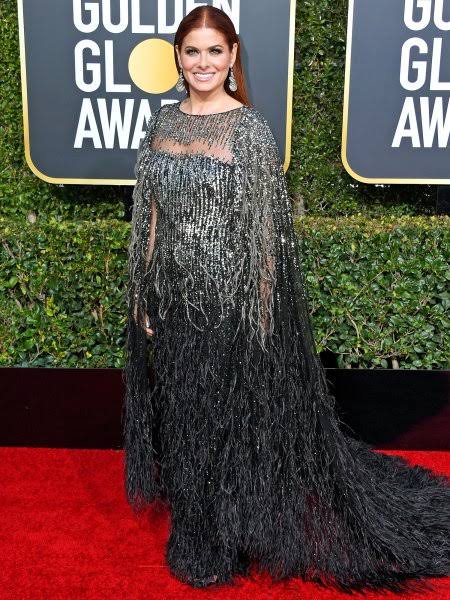 At first, WTF thought that a bear had escaped from one of the National Parks, what with the rangers being furloughed for the duration of the US Government shutdown, but then she realised that it was just Debra in a ludicrous frock. 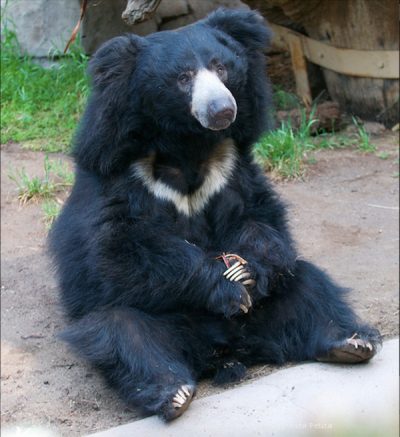 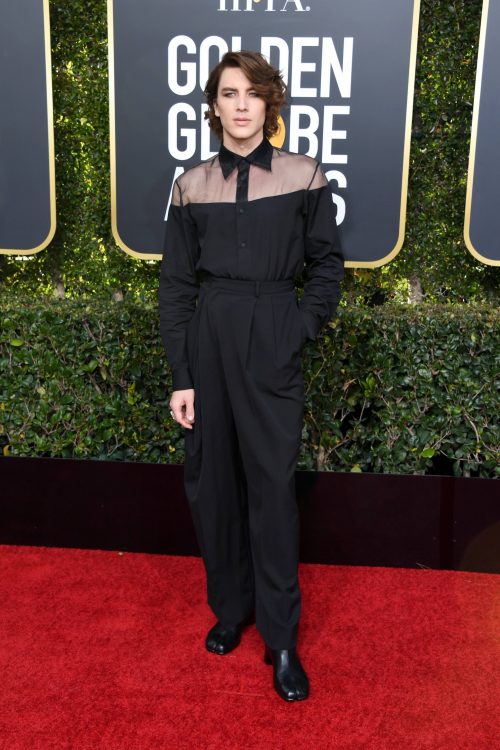 Er…OK. It is different, certainly, and very well made, but it is also on the far end of the WEIRD spectrum, with a double helping of extra weird. Margiela’s unforgivable devil’s hoof Tabi boots have previously featured in It’s Got To Go, and rightly so because to call them dog ugly would be a gross insult to canines. 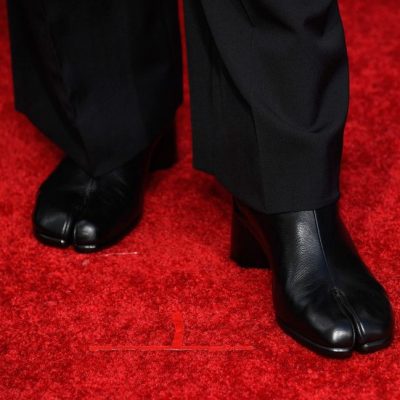 And finally, we have actress Anne Hathaway wearing Elie Saab. 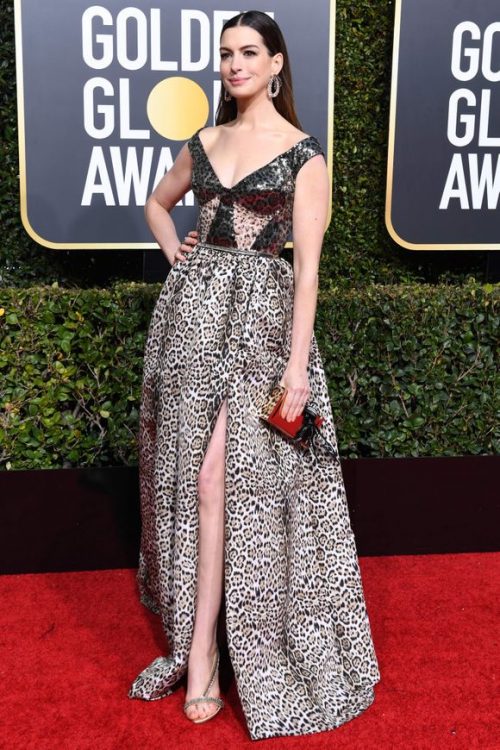 A Boudicca metal breastplate (what happens if the sun shines directly on it, your tits must cook like a couple of chicken fillets) and a skirt for which several animals seem to have died in vain. Why has the World Wildlife Fund not protested? It’s hideous.

And for those who missed the announcement, the winner of the WTF Christmas Turkey 2019 was….drumroll……ASAP ROCKY!! 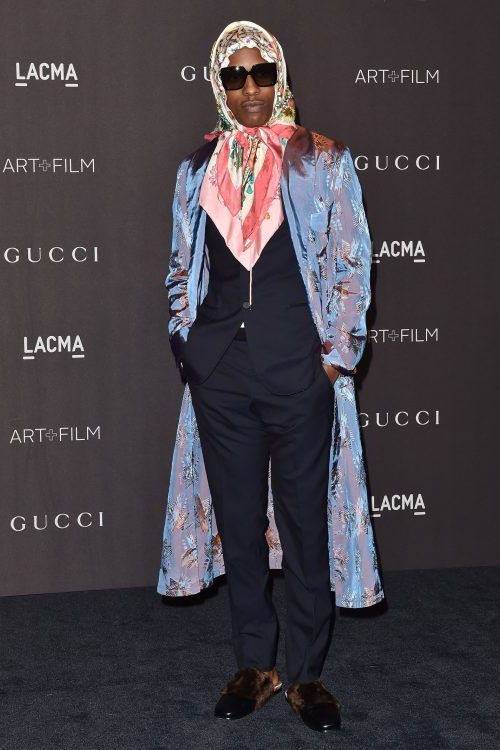 WTF described this as at the time as Princess Margaret meets Noël Coward and many of you agreed. He was clearly in the lead from the off and stayed there with around 14% of the vote.

This weeks It’s Got To Go is from Claire from Boston, Mass. who has taken great issue with the use of nouns as verbs, particularly the word “gifting”, which she maintains does not exist, not even at all. Recently even The Daily Telegraph used the word in respect of our own Glorious Majesty, who “​gifted” tiaras to Kate Middleton and Meghan Markle. The Daily Telegraph!! Is this the end of civilisation as we know it?  Because it certainly seems like it. It’s Got To Go.

OK Readers, that’s your lot for this week. Do not neglect to send your splendid comments and your suggestions for It’s Got To Go. Let us meet again next Friday. Be good. x