Do you know who these two are? You should. They have a finger in all sorts of rightwing apple pies. They have the majority of shares in the cloaca that is Cambridge Analytica. They prop up the Alt-Right shite-site, Breitbart. They donated a fortune to the Republicans to try and beat Obama in 2012 and  have given $11 million to the Media Research Center, an organisation which exists “to expose and neutralize the propaganda arm of the Left: the national news media.” They gave millions of dollars to Donald Trump’s election campaign, and insisted that he used Cambridge Analytica to run the data. They put Steve Bannon, involved in both Breitbart and Cambridge Analytica, in touch with Trump and stuck by him until Bannon turned on Trump, at which point  they told Breitbart to sack him as Chairman or they would pull the plug. The woman sat on the Trump Transition Team. You get the picture. Meet father and daughter  Bob and Rebekah Mercer.

Bob is 70 and a self-made billionaire, a technical genius who got into hedge funds in his 50s and hit the jackpot. His firm has $25 billion under management. Bob has a model train set which cost him $2.3 million. Rebekah is 43, has four children and lives in an apartment (knocked together from six apartments) in Trump Place on New York’s Upper West Side. The Mercers are not so much right wing as off the planet and still going. Despite the fact that they live the lifestyle of the super-mega-ultra-rich, complete with a 235 foot yacht, they are, apparently, anti-establishment, except the establishments they own. Bob in particular believes in minimal government, hates the Washington elite, loathes the Republican Party bigwigs and just wants to tear everything down, presumably excluding the institutions whose $25 billion he manages. They liked Trump because he was a human wrecking ball who also wanted to tear things down, deregulate everything and make America a better place for billionaires. And so they showered him with gold and helped propel him to victory. For which they deserve the torments of the damned.

Which brings us back to Cambridge Analytica. As we now know, Cambridge Analytica got hold of data concerning millions of Facebook accounts and used them to target disaffected US voters. Interviewed yesterday, Bannon, who once headed up Cambridge Analytica, was coy about how this information had been acquired, asking “everyone buys Facebook information, don’t they?”. We now know from Channel 4’s undercover film that Cambridge Analytica’s CEO, Alexander Nix, and his little gang used dodgy strategies to blacken Clinton’s name, poison the debate and spread lies. Nix, who looks like one of the members of the Drones Club running about with Bertie Wooster nicking policemen’s helmets, boasted of his role in getting Trump elected. Here is another Old Etonian with questionable morals and an overweening air of entitlement. On film, he also boasted about other campaigns he had been involved in and framing them by bribing candidates or sending Ukrainian hookers to their homes. Nix is also said to have asked Julian Assange for the Hillary emails (Assange denies it). And so all the threads draw closer. The dirty tricks. The Russians hacking Clinton’s emails and the DNC emails. Wikileaks publishing the emails. Trump’s new pal, Nigel Farage, visiting Assange, holed up like an amoebic rat in the Ecuadorian embassy.

After Nix spilled the beans on TV (he says he was stringing the “client” along – yes and WTF is Tinkerbell), the Board of Cambridge Analytica got out the smelling salts, came over all moral and suspended him. They were shocked, shocked, that the employees of company that ran the data for political campaigns, that helped get Trump elected, and is funded by the Mercers, could do anything dodgy. Or was it because suddenly the biters got severely bit? Meanwhile, the Mercers have set up Emerdata, another UK data company with Mr Nix as one of its directors. Associates of various other billionaires are also directors because hey, how anti-Establishment to have billionaires and Etonians threatening the fabric of civilisation as we know it. As long as the Mercers can keep their homes. And the train set. And the yacht.

We now get frivolous and go to our review of the week’s worst wardrobes, starting with TOWIE person, Bobby Norris.

It is a relief to see Bobby with his clothes on after his victories in the WTF Summer Stinker 2014 AND the WTF Summer Stinker 2015,  both times clad in nothing but a cocksock. Newcomers, be careful clicking on the links!!!! That said, there has to what Tony Blair used to call the Third Way between a cocksock and a tartan three-piece suit as worn by chorus boys in Brigadoon. And those are very terrible trousers.

Here is actor Phoebe Price. out and about in LA.

Phoebe’s principal purpose is to have her picture taken looking quite bonkers. Even the dog is facing the other way. Most nutters wrap themselves in tinfoil to avoid electrical current and whatnot but Phoebe has wrapped some round her legs, put on a sheer lace body over a thong and a silly hat and called it an outfit. One can be grateful for the thong.

Yes. La Perla. The company that makes lingerie and boudoir attire. WTF can only conclude that Rita was about to get dressed when the fire alarm went off in her apartment building and headed straight to a party wearing what she stood up in. 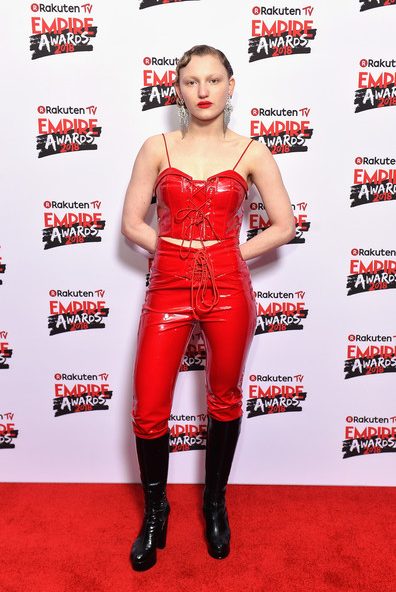 This is red latex perve-wear. She must be so sweaty. WTF is concerned that after spending two hours putting this on and three hours taking it off, poor Talullah will, in the words of the splendid Sister Pooh, have a BEASTIE yeasty.

Businesswoman and trans activist Angelica Ross. WTF does not even know what she is wearing.

Angelica looks like she has gone through five or six takes of the attack scene in Hitchcock’s The Birds.

Halsey looks like a bride in a snowstorm. There were also buttocks on display, but rather more decorously than Phoebe’s, so here they are. 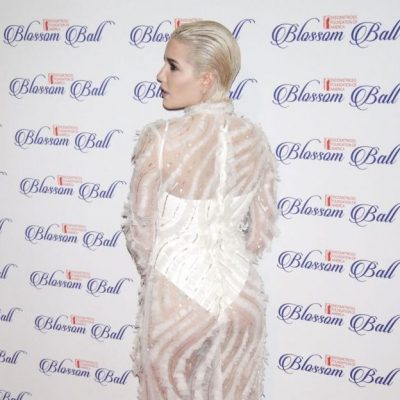 WTF aficionado Tom was asking after Lewis Hamilton the other day. Here he is with Tommy Hilfiger, for whom he has just been made a Global Brand Ambassador. Astonishingly, Lewis is not the worst dressed of the pair.

Lewis is dressed as Kevin the Teenager and is about ten years too old for those boots. Tommy is dressed as a children’s entertainer in a grey suit with a red and white trim, worn, for reasons we can only guess at, with a blue tie, black trousers and a black belt. And that little wave reminds WTF of Donald Trump’s horrible little hands.

Why does everything she wears have to be so sheer? She looks like a minge menorah in gold wrapping paper. Just plain disturbing,

This week’s It’s Got To Go comes from WTF aficionado The Justified Sinner aka @Wringhim, who directed WTF’s attention to the new phenomenon of the Boob Blazer. Read and shudder….. 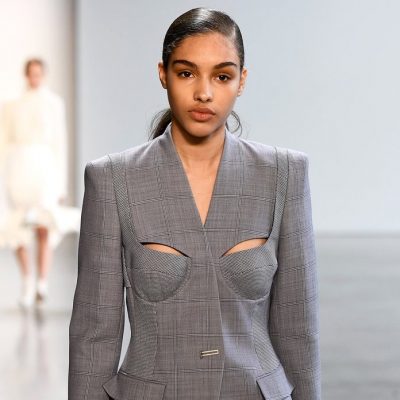 Not only is it really ugly and very draughty, but it makes your boobs look like a couple of malevolent eyes behind a bank robber’s mask. The Justified Sinner rightly points out that it isn’t even a trend yet but even so, It’s Got To Go.