Once upon a time, Younger Readers (or Older Readers whose brain cells have died off and may have forgotten) couples used to have conversations and arguments and sex and children within the privacy of their four walls. If they were famous, they might have got the occasional fawning visit from OK! In the event that your partner was having jiggy-jiggy with someone else, you confronted him/her and that someone else in private and then called in the services of Shyster, Shyster and Shyster. But all that was before Twitter. Now, no sooner have you found out that your husband, a plasterer and part time stripper to whom you have been married for just over a year, has been knocking off your bridesmaid (who was also the bridesmaid at your previous wedding to a cross-dressing cage-fighter) than you are reaching for the iPad and informing your 850,000 Twitter followers all about it in execrable grammar.

Katie Price, now 35, was a petite, pretty young woman who aspired to be a glamour model so she inflated her boobs from 32B to 32FF and became Jordan. Were Sir Isaac Newton still with us he would have been forced to rethink his Theory of Gravity. From scratch. There were countless more procedures on her boobs and her face and she now resembles an orange doll rescued from a bonfire in the nick of time. Her disastrous love affairs and her challenges in looking after her disabled son (by priapic footballer Dwight Yorke) were all detailed in newsprint and in her three autobiographies (and there have been two more since, all ghost written, like her “novels”), she was clearly a canny businesswoman and she made millions. Then she got involved in reality shows and Twitter and the  public was now given every detail, no matter how intimate, of her marriages to and divorces from dim-but-decent singer Peter Andre and the aforementioned cross-dressing cage-fighter Alex Reid, aka Roxanne, not to mention the relationship with pouting Argentinian model Leandro Penna who no speaka da English whilst she no speaka da Spanish. But then the telly-trail went cold, even after Katie married Kieran Hayler, 26, in January 2013 and gave birth to baby Jett, child number 4, last October.

Wedding Day No 3 for Katie

Last week, only a few days after announcing that she was six months pregnant with no 5 and had never been happier, Katie tweeted  “Sorry to say me and kieran are divorcing him and my best friend jane pountney bee (sic) having a full blown sexual affair for 7 months” and later calling Jane, 49, a “whore” and a “home wrecker” before heading out to confront them at Jane’s house with the press conveniently there to chronicle her arrival in full betrayal chic, namely tiny shorts, a pink sweatshirt, giant sunglasses and Ugg boots.

Katie and Jane’s husband Derrick after the showdown meeting

Since then “friends of Katie” have been giving us chapter and verse. Heat even trumpeted her fears that the deed had been done in the marital bed. Jane and her hapless husband Derrick have gone to ground. Kieran has been banished to a log cabin on Katie’s estate, apparently prohibited from speaking by the terms of his pre-nup. But it is an ill wind (or should that be an ill friend?) that blows nobody any good. Doubtless the tragic-but-plucky-soon-to-be-single-mum-of-five will now get a new reality show whilst Jane, who like Kieran has behaved quite appallingly, will be in the Big Brother House before you know it. Where is Max Clifford when you need him?

Speaking of the Red Carpet, let us start our round up of this week’s fashion disasters with Victoria Beckham wearing herself when launching her fashion line in Singapore. 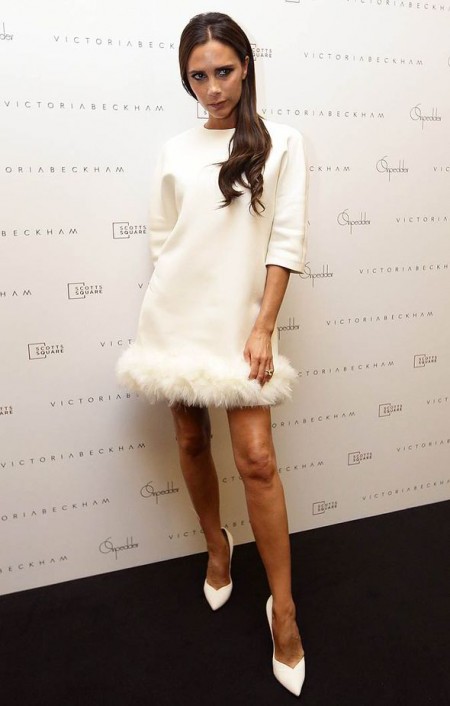 WTF is reminded of the old joke in which a bride is given a nightgown with fur on the hem to wear on her honeymoon and an accompanying note “This is to keep your neck warm”. Quite apart from the fact that she looks like Santa’s Little Helper, this picture encapsulates what is irritating about Victoria – the ridiculous pose, twiglet legs the colour of creosote and the constipated expression. Lighten up woman. And for Heaven’s sake eat something.

At first sight, Angelina seems to have dipped her face into a bowl of flour but it was only the flashbulbs making her face powder look chalky. The dress is fine. Brad, on the other hand, looks as though he has slept in that nasty tee shirt and crumpled jacket. Brangelina has a huge retinue – why did some minion not get the iron out? Note to Brad – next time go to Ralph Lauren.

There is only one candidate for this week’s It’s Got To Go, namely the Premier League which has failed to dismiss or even to discipline its Chief Executive Richard Scudamore (salary £1m+) for emails disclosed by his temporary PA. This man, who purports to be at “the leading edge” of the “whole equality agenda”, counselled his friend to keep a woman off his “shaft”, advised him that “female irrationality increases exponentially depending on how many members join your family” and generally displayed the innate sexism last voiced in public by those paens of emancipated male thinking, Richard Keys and Andy Gray. Sky Sports had the decency to sack those two dinosaurs but so far the PL has done FA. Scudamore explained his comments on the grounds that they were made in private correspondence. Like that’s an excuse. It just proves what he is really like.  Both he and the PL have Got To Go.

Now we have sometime skater Johnny Weir at the Kentucky Derby. This was a few weeks ago but, Readers, you just have to see him in this hat designed by Kerin Rose Gold.

It has got feathers and a Flying Gold Pegasus and everything! It is certifiably bonkers. And clock the co-respondent shoes….

Here is Diva Deluxe Mariah Carey off to appear on the David Letterman Show.

Now this is very mystifying.  No, not the single lacy glove or the leather jacket. Look at the crotch area and then choose from one of the following 3 options:

Off  to the Cannes Red Carpet 2014 where the annual assault upon our eyeballs started on Opening Night with the splendidly named German international jet-setter, businessman and Consul to all manner of dodgy countries, Hans-Hermann Weyer Graf von Yorck and his wife Christina. 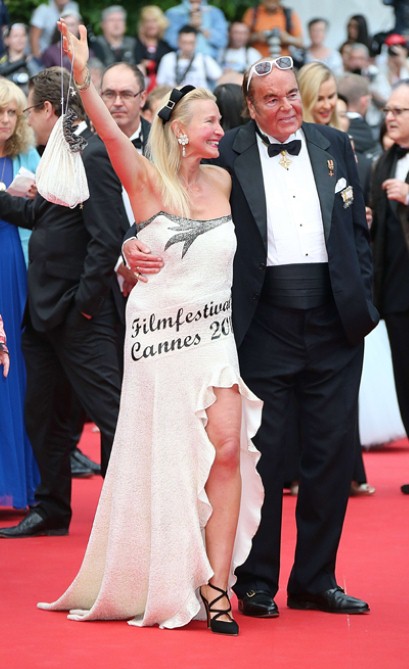 Hans-Hermann is wearing white sunglasses on his head with full evening wear and regalia whilst Christina, who is dripping in diamonds, has a dress which says “Film Festival Cannes 2014″ for reasons which WTF is having trouble understanding. Is this a posh version of the sandwich-board? #baffled

This is nasty as well. Laetitia Casta made it into last year’s post and has now done the win double wearing Dior.

This shapeless sack has been made out of the inside of an old mattress. Couture? Really?

Finally, we have Karlie Kloss wearing this foul-looking thing by Valentino. Look at the expression on the faces of the paparazzi. 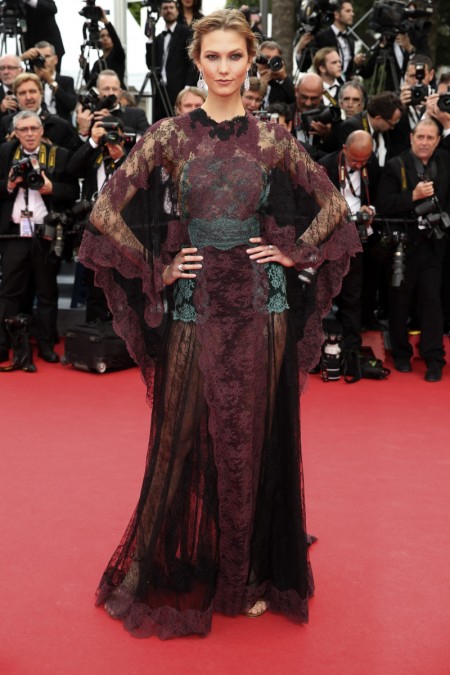 Yikes! This seems to be a moss green romper suit of the sort worn by toddlers covered with ugly maroon lace. Apart from being horrible, it seems somewhat autumnal for a summer’s night in the South of France. Meryl Streep’s daughter Mamie Gummer wore this at the Oscars without the sheer and WTF hated it and said so but this peekaboo Minge Moment version is far worse. Remember the WTF Golden Rule – if it looks shit on a supermodel, then it probably is.  And this is.

OK Readers, that’s your lot for this week. Keep your comments coming in as well as your suggestions for It’s Got To Go and let us meet again next Friday. Be good x